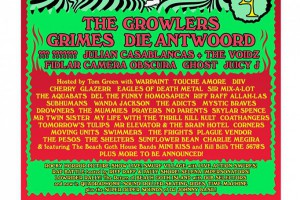 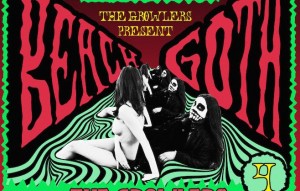 Now for the 4th year in a row, Southern California native band, The Growlers are throwing their masquerade influenced music festival at The Observatory in Orange County on Oct 24th and 25th.  Everyone on the internet collectively orgasmed upon announcement of that line-up.  The Growlers are set to headline both days in a line up that includes Parliament Funkadelic, Die Antwoord, Grimes, Julian Casablancas and the Voidz, FIDLAR, The Mummies, Subhumans, The Adicts and Eagles of Death Metal, just to name a few.  Shenanigans include a Live Smurf Village, The 5678’s from Kill Bill, a rap battle hosted by Riff Raff and Pauly Shore and Selena Impersonators.  Fucking epic.

Janky Smooth is giving away two weekend passes to one winner.  You can enter our Beach Goth Ticket Giveaway or you can:

Leave a comment on this post telling us who you are most excited to see and why.

Winner will be announced on Monday, October 19th at 11am pacific.

past coverage of some of the performers:

A Seminal Performance by The Growlers on Valentines Day

Warpaint and The Garden Mesmerize at YAAAASS! Festival

Julian Casablancas Secret Show for TIDAL at The Dragonfly

Reverend Horton Heat and The Adicts at The Observatory

A Night at the Museum with Cherry Glazerr and White Fence

An Interview with Zac Carper from FIDLAR

King Tuff and The Shrine in Venice for Redbull Sound Select