What began as a harmless Ho99o9 show at Mystery Box in the outskirt bowels of DTLA ended in orgiastic ritual sacrifice, which will ensure ultimate hegemony of their newly-dropped EP Horrors of 1999. (free download)

Okay, nothing about Ho99o9 is really harmless to begin with—the experimental punk rap group who have lit the underground on fire, and who recently proved far too bloodcurdling for Warped Tour. There’s a reason shows like these, hosted by i Heart Comix and Family Artists, are thrown in L.A.’s industrial limbo, which didn’t seem to drive fans away. In fact, the line was already down the block when I arrived.

I entered the massive space, complete with foyer, main room with a sick stage, and spacious outdoor smoking patio where the bar was. I met up with Danny, Taylor, and David of Minivan who was snapping pics; and the four of us were met with inflatable sex dolls strung with nooses, graffiti, barbed wire, and most horrifically of all, only two porta-potties (It got ugly pretty quick). 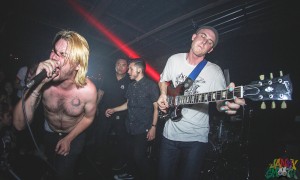 The opening band No Parents didn’t come on until close to midnight, along with the laser lights, black lights, strobe lights, and fog machines. For the next few hours, our little corner of downtown turned into the seventh circle of Hell, or Knott’s Berry Farm during October. No Parents, those crazy-ass punk boys known for their showmanship and thrash-antics, effectively blasted everyone out of their skin, acclimating us to the chaos magick that would later ensue. They even appropriated “Fly Away” by Lenny Kravitz at the end of their set (teenagers be like, ‘Is he related to Zoë?’) and actually made it sound good. 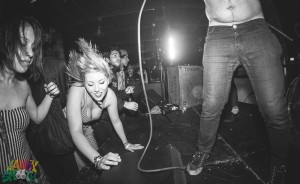 People drank, smoked, vibed, and spoke with gusto about how crazy Ho99o9 shows are. Crazy, as in dangerous. The crowd was full of mutants, both ugly and beautiful, and nothing like the homogenized hipster element you get just a little further up the 5. Hippies, goths, punks, groms, ravers, kinky preps, sideshow freaks, vampire slayers, and creatures from between dimensions, to name a few. When the venue hit capacity, there were even kids trying to jump over the barbed wire fence to get in like rabid zombies. I felt like Keanu Reeves in that nightclub scene from Constantine. 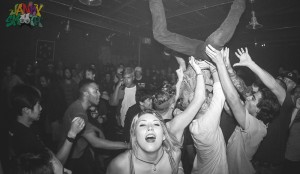 Whatever they were, there’s no worthy name for it, and I’m not going to make one up either, because then it’ll ruin the whole fucking scene, you sycophants! Sorry suits, but no advertising firm will ever figure out a way to package and sell to these kids. So either strip down naked and jump into the pit, or turn away now, and speak nothing of what you’ve seen here.

While everyone waited for Ho99o9 to take the stage, and those outside kept drinking and pissing wherever they had to, a blown fuse in the main room put us all in darkness for what seemed like 1,000 years. With nothing but chants and yelling and bodies moving around like choppy surf, we stood cradled in oblivion, to the point of wondering if the show would even go on. All hope was snatched out from under us. 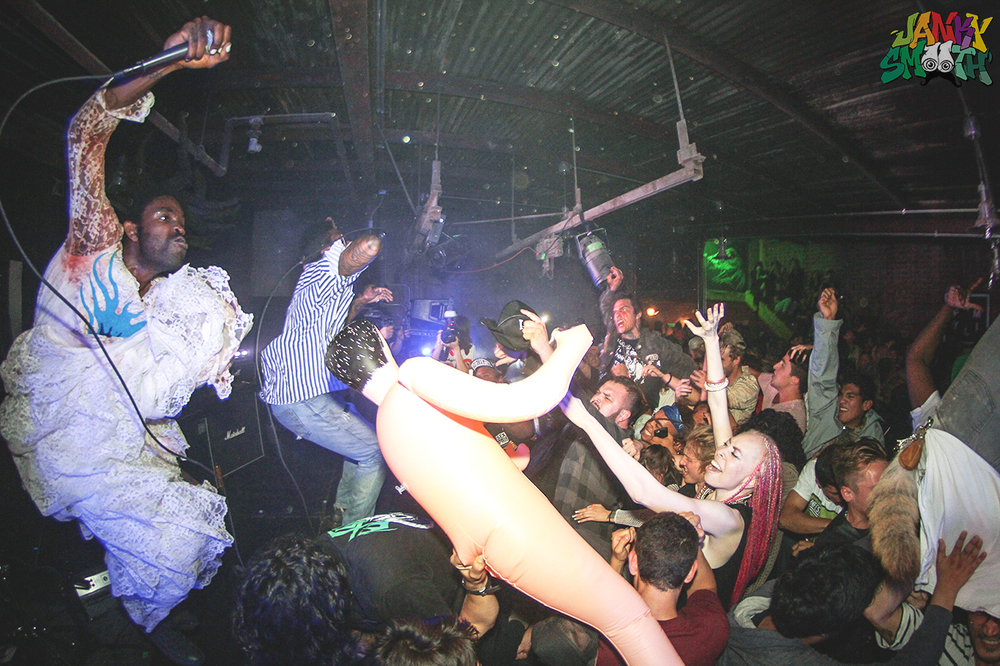 The stage flooded in blue light and crunchy electro blasted us from the speakers. The crowd came to life in a roar. The toxic twins of Ho99o9—lyricists Eaddy and TheOGM—appeared like specters, accompanied by their drummer, Ian Longwell. Eaddy’s already signature bicolored orange/black dome was hidden under a nun costume. TheOGM, with his twisted Sideshow Bob vibe, was donned in a white wedding dress, playing on a midi/sampler. What ensued was a blitzkrieg of heaving drumming, guttural moans, sick spits, dirty beats, and digital demons that sparked the entire room into one huge bottomless slam pit. It wasn’t long before the clothes started coming off, and Eaddy went from nun to buck naked demigod, screaming, surfing, and thrashing among the initiates in the crowd. I easily lost my Janky brethren in the psych-noise mushpot, especially David, who was later seen onstage taking hits, getting his camera kicked around, and snapping close-ups of Eaddy’s BBC.

I even saw a dude who jumped onto the stage get his dreadlocks caught in a stage light (the ceiling was low), and after a few seconds of struggling, he finally tore his hair out in victory before jumping off back into the pit. 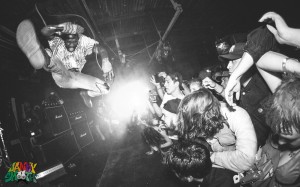 Everyone was in, no exceptions, like your first night at Fight Club—and like Fight Club, there was an instantaneous and ecstatic connection, comradery. The heat, the sprayed beer, the dirty concrete floor, the sweat, the flashing lights, the head-first stage dives like trust falls, the agro glossolalia pulsing through the speakers, it all swayed in unison like one big physiopsychic endurance trial. And whenever somebody fell to the ground, everyone around was quick to grab them and lift them up again, making sure their spirits were still intact before lovingly tossing them back into the chaos. 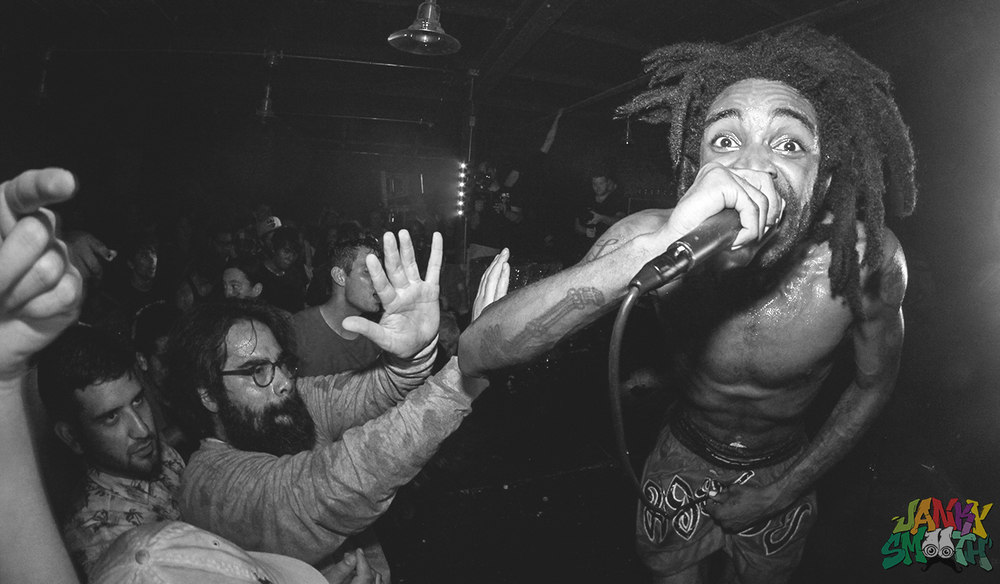 It got a point where the performer-audience binary dissolved as the stage became swamped. TheOGM finally had to lay down the law and kick everyone off. “If you’re jumping on the stage, then you better be jumping off quick! Niggas be posing and taking pictures and shit!” Everyone cackled and howled like hyenas, and then the ritual kick-started again, finally coming to a head, and when it ended it left us with a natural high that followed me all the way home. 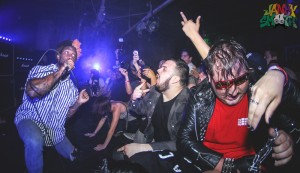 I thought I had been to punk shows. I thought I knew punk. I was reminded that it’s easy to forget. Like many my age, we’re focused so much on punk the word, the image, that we’ve lost touch with punk the reality, the roots, which lie in decimating order, hierarchy, and suffering. Real punk involves initiation, in which the initiate endures a process of ritual death, and is reborn into a new awareness, free from all former constraints.

I’ve been to a lot of shows, and in L.A. alone there are an infinite amount, but no band that I’ve seen does what Ho99o9 does. What’s their sound like? Are you serious? It can’t be pinned. But fine, I’ll take a stab at it. It’s like if ‘90s Busta Rhymes fucked a ‘90s Norwegian black metal headbanger, and then they had a baby, and then that baby joined the Manson Family, where they gave it a name like Snake, and then Snake collaborated with ‘90s Nine Inch Nails and ‘90s Marilyn Manson, and then told those polished motherfuckers to go fuck themselves, and then mainlined methamphetamine and LSD-25 and took a shit, and then that shit started playing underground punk shows and rained its hardcore shit all over everybody from New Jersey to L.A. That’s about as close I can come to describing Ho99o9’s sound. 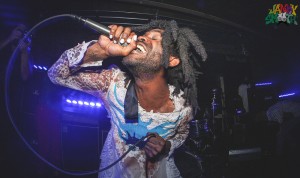 But don’t take my word for it, and DO NOT miss a chance to see them live. Like many up-and-coming bands nowadays, they know the name of the game. There’s a reason the new EP is available to download for free. It’s all about the live shows. Participation, initiation. There’s freedom in shows like this. Body and souls at the door. There are no sensibilities here to offend. The Ho99o9 crowd is not something stupid or millennial like post-racial or post-gender or post-postmodern—but post-shebang, post-ideology, post-identity, trans-human, trans-fear. Through and beyond. All the free songs in the world won’t save you from the confines of your overpriced studio apartment. Through Ho99o9 in the flesh, if you can bare it, your atrophied soul is rekindled. You are initiated. Beyond. Now get your ass out there and see a show.