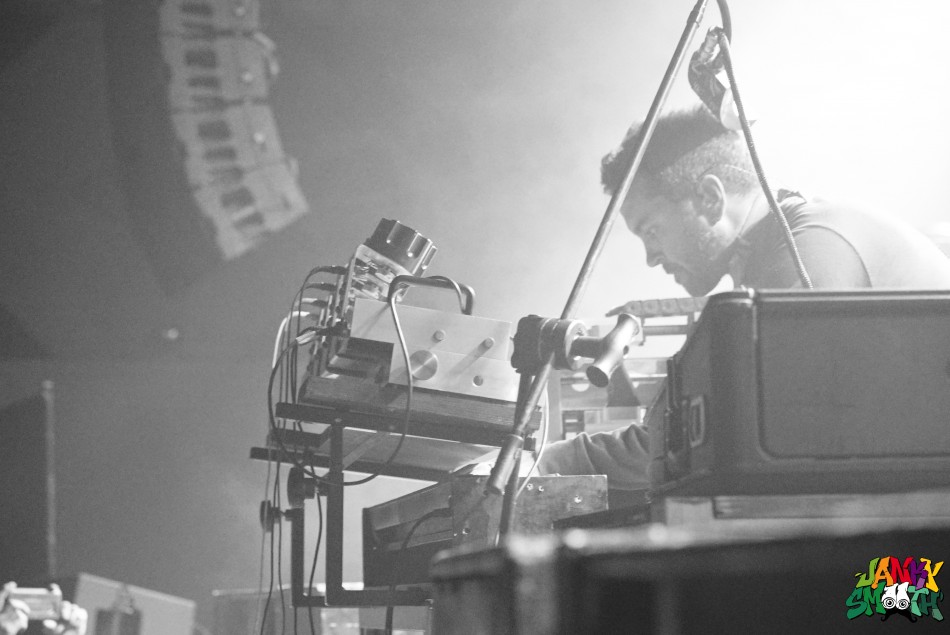 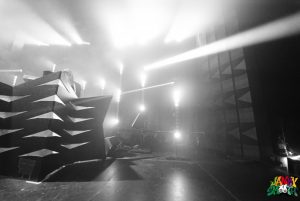 Electronic music allows a single artist to take on all the working parts of a band because those parts become synthesized in their machines. The electronic revolution has opened up new opportunities and avenues for artists who might not have ever been interested in picking up a guitar- and that’s no slight against EDM artists (up until this night I was under the impression that EDM was the Pop style of electronic music, at large).  The point of music isn’t just to wow you and me with virtuosic and technical playing- it’s to express ones soul and if electronics help an artist do that more purely and directly then it’s a good thing. In this sense, Jim Morrison was right when he predicted the future of music would consist largely of one person and an arsenal of components.  So if in Morrison’s mind’s eye he had an image of what that future would actually LOOK like, I doubt it would’ve differed too much from what I saw at The Regent Theater when Perturbator, Author & Punisher and Whiteqube were booked to showcase a different kind of electronic music than what you might imagine when you see the letters E D & M bunched together in an acronym.

( I wonder if they had to go out and buy more power strips and extension chords for this show?) 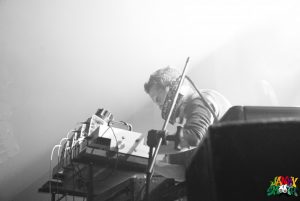 It’s not as if electronic music (or any music for that matter) splintering off into multiple sub-genres is anything new- like house music, acid house, drum and bass and of course, techno, ad infinitum – and it has certainly become standard form in rock and rap. The real hook to Perturbator‘s show with Author & Punisher and Whiteqube was that three different genres would be repped- EDM, Industrial, and EBM (an acronym coined by Front 242 standing for Electronic Body Music) shared a stage and like electronic music should do, the boys and girls at the Regent Theater shared a hive body, mind, and spirit to dance the night away to the ultimate sound of collectivist culture.

The moment I stepped into the Regent Theater, I knew this show would be special. The stage looked like it was taken over by a hoarder or there was a shoot of an episode of Pawn Stars, because it was completely covered with gear. Checking out the crowd, I realized everyone around me was young and fresh faced. Electronic music is a youth magnet, as it should be because only young people look good dancing and only young ear drums can handle the volume. Not to mention, youth these days don’t like to think and if your music doesn’t have lyrics that just makes things easier for everybody.

Whiteqube took the stage first and stood behind a desk with two synthesizers and a Mac laptop and projections behind them on a small screen. Despite their name, the duo were both dressed in black from head to toe, even wearing shades. Their intense style of dark club music was the perfect soundtrack for a cocaine filled night in Berlin but perhaps an 8:30pm set in L.A. just wasn’t the most dance conducive setting. Their songs have a manic pulse as both members, T. Ryan Arnold and Jason Bractune shout at the audience. Their lyrics try to wake people out of their sleeping consciousness. Using electronics to convince people to unplug might be the only way out of this trance, after all, “fight fire with fire”, as they say. One insane moment of the group’s set was when they projected stock footage of political unrest, riots, and suffering from around the world, perfectly edited to their fast paced electronic attack. I caught the band’s latest single “The Return” on video, check it out:

I have been trying to get Danny B to listen to Author & Punisher for the longest time but Riot Fest had summoned him to Chicago. By building his own machines, Author & Punisher has made himself a maverick in the industrial scene with both originality in sound and performance. I’m surprised it took me this long to see him in concert but as a reward for my patience, I was gifted a musical experience so visceral that it was downright draconian.

Tristan Shone, who caves in ear drums under the pseudonym Author & Punisher, set up his machines in the center of the stage. His rig was a beautiful sight to behold, there was one lever to pull back and push forward to sink or surface us in waves of grueling noise. Then a keyboard below the main console of destruction in the center of his rig. A sliding hand control he would clench with his right hand to punch forward or pull back to make clanks and clamor. And finally, he sang into a curved microphone piece that amplifies his voice with different filters depending on which part he growls into. One has to be quite insane to manufacture such a monstrosity of metal and wires. 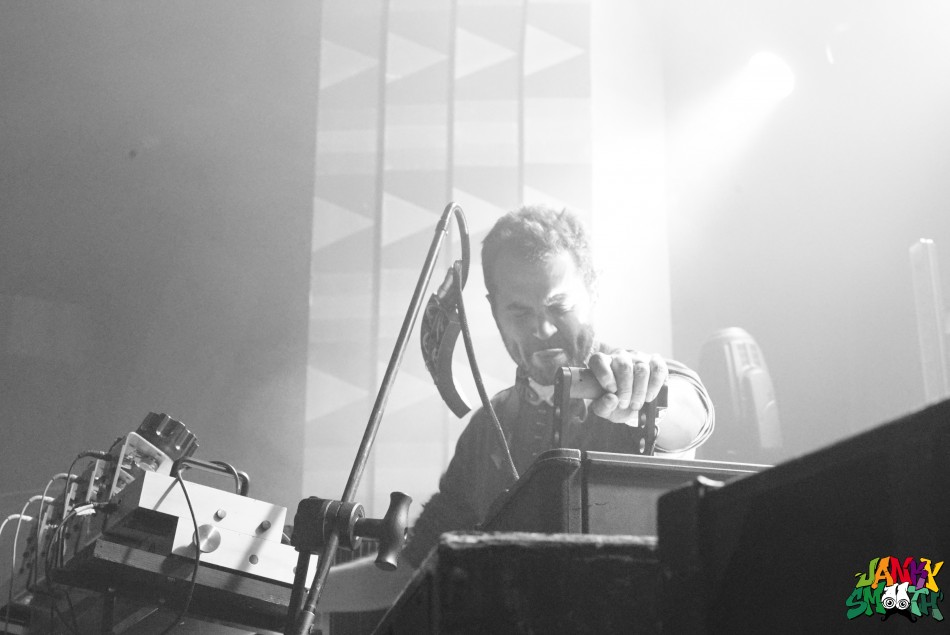 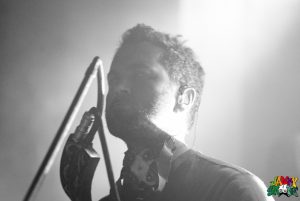 Shone’s form of punishment was such a noisy, heavy, and deep barrage that enveloped you in noise instead of attacking you with it. Your fucking molecules vibrate and break apart into the same static that A & P bathes you in. It’s not always pure noise though, there are moments that Author & Punisher creeps in vague, layered melodies that could be featured in Castelvania‘s next video game installment. He’s as black metal as industrial music gets. Seeing him up there, covered in purples, blues, and darkness, was like watching a malevolent, dark lord play this dimension for one night only.

If industrial noise was manifest as daemon it would be Author & Punisher. Here’s some video I captured of the insanity:

“she sensed her friend’s perturbation”

“Frank’s atheism was more than a perturbation to Michael”

There had been eight tall lights set up in the back of the stage all night and I was wondering just how they would be used and what they would look like once Perturbator’s set started. Before even a note was played though, I knew this shit would be completely insane. Two keyboards were brought on stage then a cyber-goth-looking podium was placed around the keyboards for Perturbator to stand behind.

related content: Born In The U.S.H. – United States Of Horror 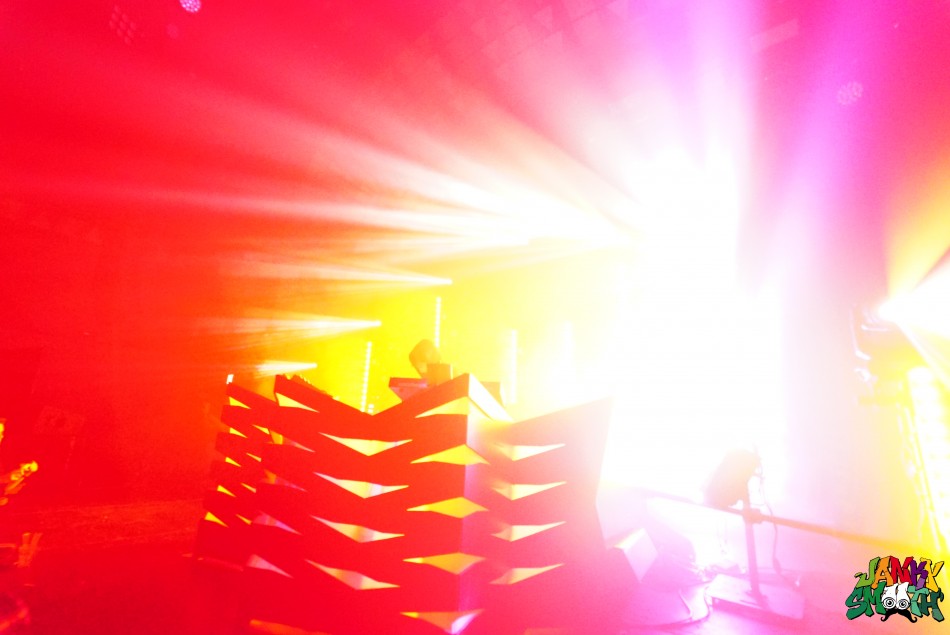 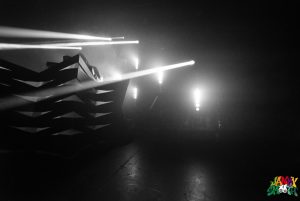 Just as I suspected, the music and its marriage to the light show was just as the universe itself- order born from chaos. Perturbator was up there, wearing a hood over his head for the entire set, and manipulating the audience like puppets on strings. The visuals were like watching a seizure inducing anime while his heavy-metal-edged-video-game-retro-noir electro was driving the kids into convulsive dance.

I liked Perturbator but like most EDM, if this can even be classified as such, unless I’m in a certain mood to totally let go, It becomes monotonous after half an hour. As crazy as it was, I wrapped my head around it too soon.