I remember the first time I saw Adult. live at Echoplex for their Detroit House Guests tour. It was one of the most insane and exciting shows I’ve ever seen. With various guest performers, obscure stage antics, and the hardest off-beats, they were truly avant-garde. It was weird to its core but I danced so hard, the weirdness absorbed into me and I didn’t puzzle over it. I fell in love with the duo’s music that night and getting the chance to interview Adam Lee Miller and Nicola Kuperus before their Zebulon show with Plack Blague only intensified my admiration. They were well spoken, intelligent, and unlike many artists with more direct and obvious messaging, they showed a deep understanding of what they stand for and who they are. 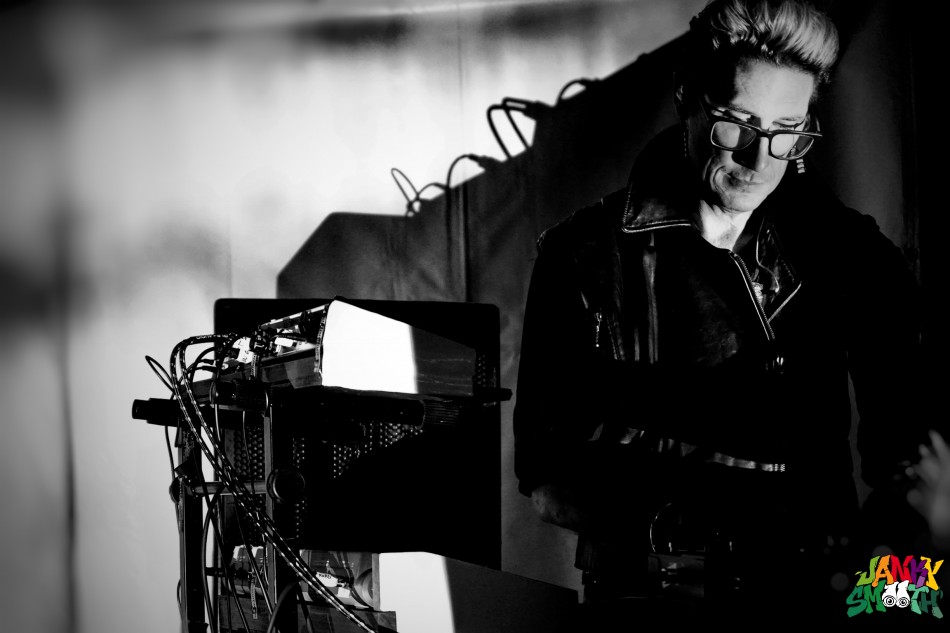 RS: The latest album is This Behavior. A few of the songs seem to reference human sexuality. What is the album’s title symbolic of?

NK: I dunno if I would say it’s symbolic of human sexuality. I think it’s poignant for the moment we’re in with how insane the world is. The process for writing this record was very isolated, really off the grid and away from what was happening. This was probably one of the first albums where we really didn’t deliberate on the title. We wrote the song “This Behavior” and said this is what the album should be called. It was just so spot-on that it felt natural. When we wrote The Way Things Fall, I think we came up with 50 different album titles and we would look at them everyday and go “what should this album be called?”

ALM: The way I work with Nicola, I never ask her what her lyrics are about but I need them to make sense in some way for me. I think she’s really great at writing open ended lyrics that can be put into people’s unique circumstances. So it’s like something universal that becomes very specific and personal. For me, This Behavior was about bad behavior, good behavior, condemned behavior, it was about judgement and that’s how I gravitated towards it but I still never asked her what her intent was.

RS: Your last album Detroit House Guests featured numerous appearances, how did it feel going back into the studio with just you two?

NK: It’s interesting, we hadn’t realized this until we did an interview with someone in Detroit, it’s so meaningful and inspiring when you collaborate, there’s so much growth that comes out of that process to you as a person. I felt like I grew doing that record, as hard as some days were. You’re so vulnerable and terrified because everybody we picked was a peer and it was a really intense process. Doing this album in total seclusion, just the two of us, in a different environment was really important because we were so vulnerable in the working process the last time that we needed to get back to who we were and rediscover ourselves as artists.

RS: How did each of you get into electronic music?

ALM: So, I started my first punk band in 1985 and I knew nothing about music, exactly what punk was about… you can learn three chords and start a band. Very quickly, I got bored of that formula and bought a synthesizer. Mostly for me it would be coming from Tubeway Army, you know Gary Numan. I loved that it was still punk, because you know there’s the overarching concept of punk and then there’s the sound that we associate with punk. So, you still had that punk sound but then it had this mini-Moog. I was like, “Man, that’s so much more interesting”. Already in two years our band had figured out everything, so I brought this synthesizer to practice and the drummer was like, “Oh my god, I have a couple of electronic pads in my closet” and when the rest of the band arrived for practice they were super pissed off and were like “No fucking synthesizers,” and kicked me out of the band I started which gave me a lot of fuel and I was like “Fuck you, I’m going to figure out how to do this by myself”. She (Nicola) was into hardcore.

NK: I didn’t know anything about electronic music until Adam, that electronic music can be so intense and so punk that it could be more punk than punk. When I met Adam it was like “Have you heard of Cabaret Voltaire or Throbbing Gristle?” And I was like no, at that point of my life when you said electronic music I was like, “Oh, that’s the terrible shit they play at the mall.” So, I was just like “No way”. So, it really blew the hinges off the door. It was pretty amazing. RS: Since he (Adam) mentioned it, what was your favorite hardcore band?

NK: I was a pretty big Fugazi/Minor Threat fan but I also listen to a lot of weird stuff like Pennywise, NOFX, and weird straight edge hardcore. One of the first records I ever bought was The Cramps Bad Music for Bad People. The first cassette that anybody ever gave me had Dead Kennedys on one side and PIL on the other side.

ALM: Our first cassettes really partially define the sound of Adult. I grew up in Indiana, no internet, no nothing… a friend of mine had just transferred from Atlanta and he saw my folder had all these names written on it. So my first cassette he made me was Black Flag “Everything Went Black” and Depeche Mode “Broken Frame”.

RS: For dance music, I find an incredible amount of psychological and philosophy subtext in your songs. This album in particular raises questions like does behavior define identity or are mind and body separate things. What I really want to ask is do you think the mind serves the body or does the body serve the mind?

ALM: I would say as a touring musician, the mind rules the body. We’re doing 47 dates on this tour, it’s a long tour, we won’t be home until December 15th, we’ve already been on the road three weeks. If you don’t have a strong mind, your body doesn’t want to get out of bed. Your body doesn’t even want to get out of the van when you pull up to the gas station. The mind is what says, “no, we’re doing this”.

NK: But the body is your animalistic, primal core. Like in the case of addiction. They work together. It’s a system.

RS: You joined the Dais records family this year? How has working under that label been?

NK: You just gave me goosebumps. We had our own label, still do, called Ersatz Audio, which is now in cryogenics, and we’ve been so fortunate to be on so many incredible labels through the years but what I really love about Dais is they have a community of artists we identify with. Everybody’s working for a greater cause. It’s almost not an individual thing. It’s a movement. We don’t sound like 3/4’s of the people on the label but we share an ethos of making difficult music. Not to say that our music’s difficult but it’s definitely not pop culture.

ALM: One of the things that was just so beautiful at our show at Lot 613 was that we invited Gibby Miller (co-owner of Dais) and after the show I said “Hey, just so you know, we really respect your label. If you’ve got any remixes or compilations coming up, we would be so into it…” And he goes “…What? I’m totally down, lets talk next week. I bought every Ersatz Audio record from you guys directly.” All of a sudden, I remembered writing his last name down because mine is Miller and he’s Gibby Miller. It was just so amazing that the label we were eyeing had already been a part of our past. Then Andrew from Drab Majesty walked up to me and he had a Dais pin on his jacket and I said “Nice pin” and he took it off and put it on my jacket and I said “I think something just happened here”.

RS: One of the most formative musical experiences I ever had in Los Angeles was Graeme Flegenheimer’s Berserktown. Now that Graeme has moved to El Club in your hometown of Detroit, what impact has it had on the scene? I get the feel it’s prompted some kind of tiny underground music renaissance?

NK: I think you’re totally right. Graeme has the ability to bring in a lot of bands that other people can’t afford to bring to Detroit and it’s pretty amazing.

ALM: Did you see the airport hanger show we put on?

ALM: What I love of about Graeme is that he thinks outside the box. He did a show last year with Protomartyr on a steam boat on the Detroit river and we agreed to be one of the openers for that show. It’s going to be part of Detroit history, tons of people came out, everybody had a blast. After that, he came to us and said “I know your album’s coming out in September, what do you want to do?” So, we looked at tons of weird locations and ended up renting an airplane hanger from 1932 I think. It was us, Universal Eyes, Boy Harsher, Fluct, DJ John Jammin’ Collins, Zola Jesus DJ’ing and PrismViews. And Graeme did that.

ALM: Definitely Iggy. For me Underground Resistance is the most important Detroit music. It changed me and reinforced who I was. They don’t sell out. They’re electronic and they’re hard punk. The early techno was really important too. It was the same thing as punk. So hard Rob Hood, Jeff Mills, Carl Craig.

NK: That’s the really interesting thing about Detroit, you can have someone like The Gories then have someone like Jeff Mills. I think there’s definitely a certain rawness. I do sometimes feel like we live on an island. It’s an interesting thing to think about in our culture, there was a time when artists created their own sounds as a reaction to their environment but now that we’re all so super connected, what does that mean?