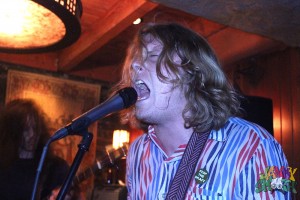 Ty Segall at The Griffin

It was a real treat to attend a secret Ty Segall show this past Monday- you feel privileged to have stepped into some well-guarded party. The show was at The Griffin and I wondered how these other people knew about it? Are they personal friends of the bands?  I could not find any information about the show on social media and I couldn’t help but wonder how long these Mondays at the Griffin are gonna stay a secret.

Last night, The Birth Defects and Ty Segall performed in front of a few happy people.  The last time Segall did a show at The Satellite, I was not fast enough to get a ticket. However, I managed to see him with his band, Fuzz at the Troubadour two weeks ago and now, this show at the Griffin!  It was completely unexpected and a lot of fun. Birth Defects started the show a bit after 10 pm and, as they did when they opened for Fuzz at the Troubadour.  They slaughtered the place, raising a monster at each song with their propulsive, raw and very loud sound.  Their album ‘First 8 Mistakes’ was produced by Ty Segall, which explains the connection, and whatever they put in their hard-rock-punk-hardcore recipe, it is working. These intense guitar assaults, menacing hardcore riffs and beast-like screams were impressive. Frontman Jason Finazzo sounded like a force of nature, with former Bleached Jonathan Safley on bass and Steven Heet on drums gave the right name to raging garage rock. They may have become one of my favorite new bands. Just before Ty Segall’s set, I realized that Mr. Hardcore himself was standing next to me- Henry Rollins loves Ty Segall.   They had a friendly chat before the show and I checked out Rollins’ appreciative head banging and approving smile a few times during the gig. Surrounded by the band, Wand, Segall’s songs performed live sound like chaos with a hard-poppy-core. Everything sounded nastier, faster and heavier than on record, as the whole thing was executed with a real playfulness and some crazy energy.  An enormous sound was built with fuzz and distortion, some crazy and propulsive guitar playing and epic duels, mixed with hair whipping and some serious moves in the crowd, despite the narrowness of the place. He kept calling his band the Rolling Stones and he announced a Bruce Springsteen cover before starting to play Neil Young’s, ‘Ohio’. They may have also done another cover but it was a bit hard to tell what was what, at times. Segall also announced, several times, ‘This is a new song’ and since they were working without a setlist in this dark place, I really couldn’t tell you much more than that.  Anyway, Ty Segall is such a prolific artist that it’s hard to keep up with him and his extensive discography. He seems to have absorbed the entire history of music with his myriad of influences. Ty Segall will and is, saving rock & roll.

Shannon and the Clams: Case of the Monday’s at The Griffin