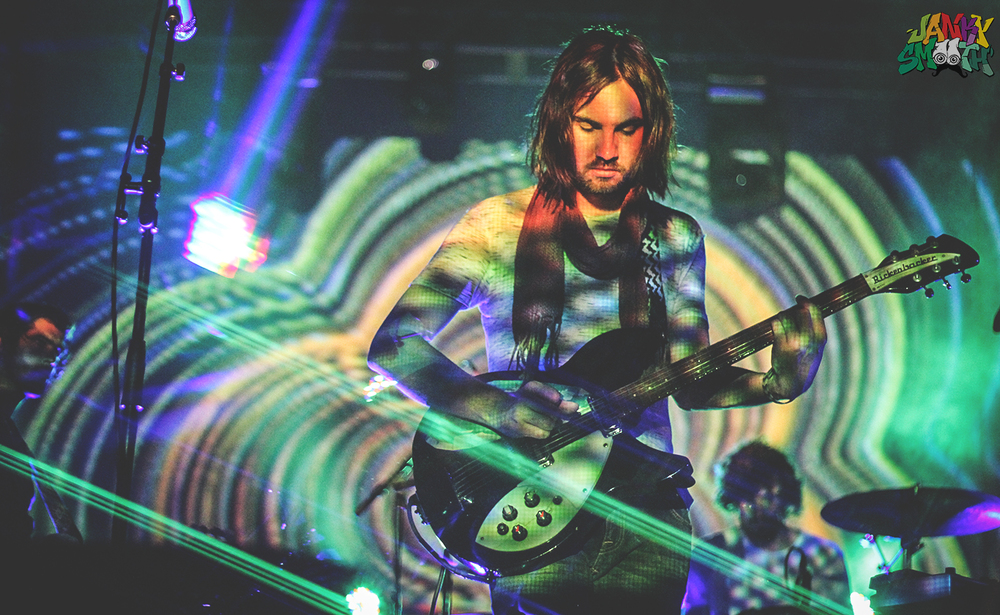 There was tie-dye in the sky Thursday night in Los Angeles. Fluffy clusters of clouds blanketed the sky overhead and in the west, off in the distance, The fire of sunset in the clouds over the Pacific Ocean was the perfect backdrop, as I made my way over to Hollywood Forever Cemetery to see Tame Impala play the first night amongst the dead. I was a bit nervous. Tame Impala has been one of my favorite bands for the better part of a decade but my love for the band has been put to the test with the release of their latest LP, Currents. The over produced album under delivered on the epic and anthemic arrangements I have come to love and expect. While I love the risks that were taken, I’m not in love with the final product. How would these new songs play live and how many songs I love will be bumped from the set list? 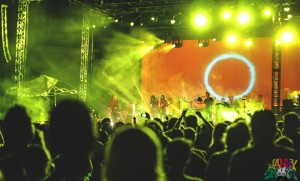 The power of the perfect setting for a concert cannot be overstated. As we walked down the main path of the cemetery, we were surrounded by the concrete and asphalt tombs of Hollywood royalty, such as Valentino, Mickey Rooney and Cecil B. Demille. Stone sarcophagi and marble mausoleums surrounded us and it felt like we were Blade Runner’s hunting replicants in a post apocalyptic Los Angeles. As the sky grew dark, soft blue and green lights illuminated the palm trees and neon purple wrapped around the architectural lines of some of the most prominent structures that were home to the dead. 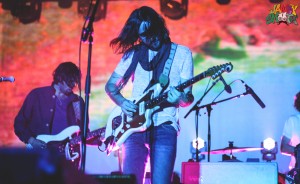 A festival grade stage stood in the corner of a massive field of grass that was void of any grave markers. The lawn, which was in all likelihood, the scene for opulent funerals and start-studded memorials of the past was now an altar of rock and roll. A translucent curtain covered the altar and lights danced across it as the lawn filled up with the living. A line check for one of the guitar amps rang out across the network of speaker monitors that were clustered across the venue and suddenly, the band started playing. The stage remained cloaked for a majority of the instrumental intro and what would become one of the most spectacular visual light shows I had ever seen, began it’s flickering on the translucent material which continued to hide everything about the band, except for their stretching shadows. 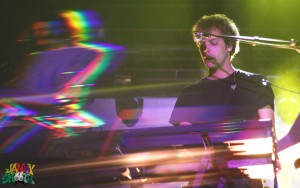 Finally the curtain dropped and the band rolled directly into what is easily my favorite track off the new album, “Let it Happen”– a bold choice to kick off this highly anticipated show with a 7 minute song from their latest release. It quickly answered my question about how those digital sounding drum hits would sound live and the answer was- pretty fucking good. The drum kit mics were fed through filters and effect sends in typical, Tame Impala, audio nerd out fashion. In fact, the sound at this show was like nothing I had ever heard. Monitors were strategically placed throughout the concert area of the cemetery and we were quickly privy that this show featured full surround sound as echo effects from various instruments bounced from tower to tower. After attempting to use my eyes to follow the echoes, I glanced back up to the stage to see swirling colors consume both the band and screen, which served as the back-drop for the evening. 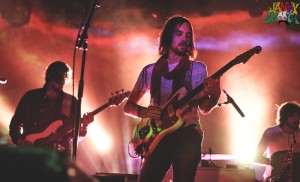 The audience was rather reserved for the entirety of the opening song. They showed signs of life when Tame Impala rolled directly into “Mind Mischief” as the second song of the set list. The guitar tones were warm and fuzzy and it was my first opportunity to geek out on the drumming of Julien Barbagallo- always a highlight of ANY Tame Impala show and he was on fire on Friday night. His fills and crescendo drumming on “Elephant” were notable. The band plowed through a majority of songs off of Lonerism. They didn’t play anything off of InnerSpeaker until the 6th song of the set, “It Is Not Meant To Be”. One of only two disappointments of the evening were only 2 songs off of InnerSpeaker and a low energy audience that notably perturbed Kevin Parker who, on a number of occasions, paused as if he was waiting for something that never came- the classic struggle between band and audience in Los Angeles. I would bet my left testicle that the audience on night 2 was significantly more energetic. It just always seems to play out that way.

The epic tonality of the band was on full display on every song because every song featured an extra helping of jam, spread on each track like toast to give an extra zing of flavor- whether it was just a few bars of riffing and drum hits or the minutes added to “Apocalypse Dreams” to take patrons on an exploration of sonic virtuosity. Apocalypse Dreams was the last song in the main part of the set and it followed Alter Ego to punctuate the main section of this concert in an emphatic exclamation of two of the most dynamic songs in the Tame Impala catalog.

The encores were “Feels Like We Only Go Backwards”, which was not a surprise and “Nothing That Has Happened So Far Has Been Anything We Could Control”, which was, maybe, one of the biggest surprises of the evening. An amazing song off an amazing album but it hit me then that Tame Impala would only be playing two songs off InnerSpeaker and that deflated me a bit. 6 songs off that new album and only two off their debut LP.

I hate to beat up on Currents anymore than I already have. In fact, I can almost guarantee it will win a Grammy. But much like Band of Horses Grammy nominated “Infinite Arms”, it marked the beginning of the end of what I loved about that band and they never released an album I loved ever again. Kevin Parker is sure to become an iconic figure of rock music from this era but I fear that Parker making music for people with discerning tastes is over. It seems like I am one of the only critics who have gone on record voicing my displeasure over Currents but that doesn’t change how incredible Tame Impala is live. It just means that as the years pass, I’ll hear less Tame Impala songs I love live with each record they release. New album notwithstanding, Thursday night at Hollywood Forever Cemetery was a night I will never forget.

Intro
Let It Happen
Mind Mischief
Why Won’t You Make Up Your Mind?
Why Won’t They Talk to Me?
It Is Not Meant to Be
The Moment
Elephant
Be Above It
Eventually
Oscilly
‘Cause I’m a Man
The Less I Know the Better
Alter Ego
Apocalypse Dreams

Encore:
Feels Like We Only Go Backwards
Nothing That Has Happened So Far Has Been Anything We Could Control