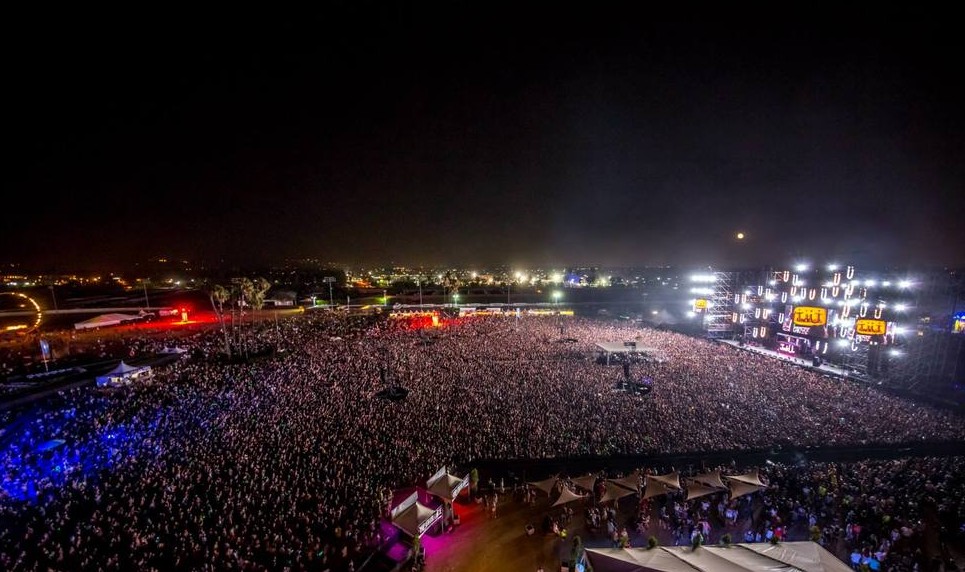 I have been a HARD Presents fan for a minute now.  HARD Haunted Mansion 2011 at the Shrine was my first HARD event. HARD Summer 2012 was my first HARD Summer. Both events were top notch and helped forge my musical tastes as I grew into the LA being I’d one day become. Between then and now, I’ve been a part of about a dozen different HARD promoted shows and festivals. Over the weekend, on Sunday, I came upon the opportunity to head to the Pomona Fairplex to see what HARD Summer 2015 had to offer. As a fan of the brand, I had high hopes – as the lineup seemed eclectic enough in a plateauing ‘rave’ culture. 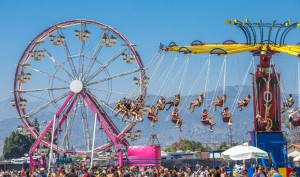 We arrived later in the day, but there were still lines of barely dressed teens at the gate. It was an 18+ event but the security was barely holding the seams together with a very lax bag/ID check – there was definitely a <18 crowd at this event. We got through just fine and headed to meet some friends at the PINK Stage for some Jamie XX. There were 5 stages; 3 indoor and 2 outdoor. Pink, Yellow and 7Up (green) were all in Fairplex hangars – the HARD (main) and HARD-ER stages were both outdoors. Every set we saw was A+ – however, the production was majorly lacking on a  few fronts.

Jamie XX’s drone bass filtered out the rave kids QUICK, and he moved forward in his following friendly set with ease. Playing off his new album and edits of older tracks, partnered with a huge disco ball behind him, the XX counterpart immersed us in a new age dystopian disco. Caribou followed shortly after on the same stage, which had the same effect with turning the ravers away and pulling in the more open minded attendees. They did a fine job – their set was tight and the sound was top notch, but you could tell that Daniel Snaith and the rest of his quintet were exhausted from a rigorous touring schedule. The energy I’d caught from them months prior at Pappy & Harriets was not there, but they still killed it.

After Caribou, I was slapped in the face by major production flaws at HARD Summer 2015. We left the set early to catch a minute of Tiga and What So Not, each playing banner sets in the Purple & 7-Up stages respectively. What So Not was overcrowded and despite the huge AC units spanning the hangar – barely any fresh air to breath. This made our stop in that stage quick, almost as quick at the next stop in the 7-Up stage. I am a big house fan and catching Tiga has been on my ‘to-see’ list for a long time. I was able to have to standard room volume conversation with someone, literally five people back form the stage. For HARD being all about the music, it shouldn’t have sounded like Tiga was playing into a $100 PA you can get from Costco. Jamie XX and Caribou had great sound, but they are both in the middle of huge tours and I’d imagine are bringing along their own techs. The bad sound for the DJ sets we caught should be credited to the festival. It was a big disappointment. We tried the 7-Up stage again, later in the day, for stage headliner Boys Noize – the sound was still lacking and disappointing. The volume/sound issues were the same between every stage (bad levels, no gain), except the HARD-ER stage, which faced the Fairplex racetrack stands so that allowed them to pump the volume. This came into play later in the day and made for some excellent live sets. We didn’t even try at the HARD (main) stage, the crowd was too rowdy and the sound was poor. The entire area was a dusty cloud and a bro-fest. One thing I will give the festival MAJOR credit for – was polarizing the festival to keep different types of music fans in different areas. On the HARD-er stage, we were treated to Die Antwoord, Chromeo and Ratatat (who closed out our day). Gary Richards was smart to put those live acts on the stage he could have the loudest, I know he knew the major music fans giving his festival as shot would be there. While Die Antwoord and Chromeo brought sets you’d expect from them, enticing performance/memorable tracks, Ratatat totally blew us away. I had always passed on them due to crowd issues, too many people around the stage, too many people in the tent – making it unwatchable; but at HARD we were able to WALK to the front of the stage minutes before their set.  That alone should tell you something about the crowd we were a part of – everyone else was catching the Skrillex/Diplo duo Jack Ü on the main stage. Ratatat shred out a greatest hits set, alongside hologram visuals, and I was blown away by the raw talent the Brooklyn natives were shelling out. Their energy between each other and the crowd was so genuine and natural, it was a great way to end the night. Please catch Ratatat if you haven’t before, they make you feel like you’re peeking into a comfortable rehearsal as they absolutely destroy the minds of the crowd (in a good way). The vibes were on point and we left a few min before they ended to beat the traffic.

To wrap up the fest, I will not be going to another HARD Summer at the Pomona Fairplex. It’ll take a lot to get me back out to the festival, in general, but I will still support some of the one-off events they put on throughout the year in LA – because their bookings are solid when they work at places like the Pallaidum or El Rey.. The entire fest was a bit of a shamble but the people we went to see played great sets; which I value more over the ‘experience’ since we were only there for a day of it.