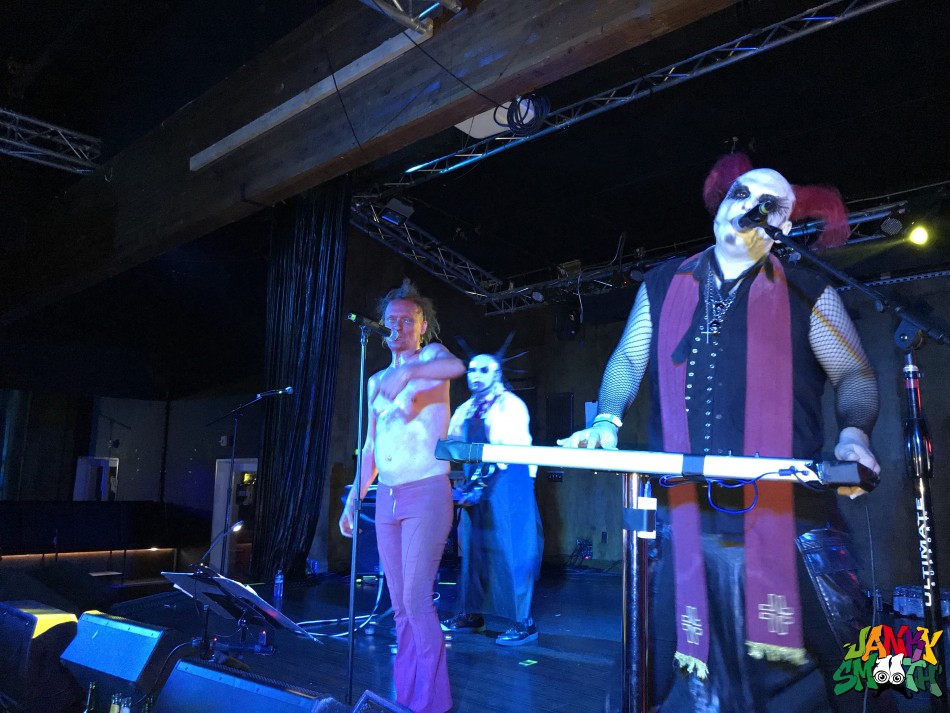 I’ve always been iffy about going to Das Bunker. Industrial music has held a special place in my heart since high school when I used to smoke myself stupid and put on headphones to let Skinny Puppy pervert my vulnerable mind. Later, when it came to light that Skinny Puppy’s music was used to torture inmates in Guantanamo Bay, I had to reassess what damage I had done to my senses. I’ve always loved the music but the industrial scene itself, turned me off. Those industrial pants are fucking ridiculous and the dancing is down right goofy, especially when the only one on the floor is a 50-year-old gamer, sucking in his gut. So, I had my reservations, but with my need to never miss out, I still feel like shit that I couldn’t go to the Das Bunker 20th anniversary show, last year. Now I would kill to see The Legendary Pink Dots. 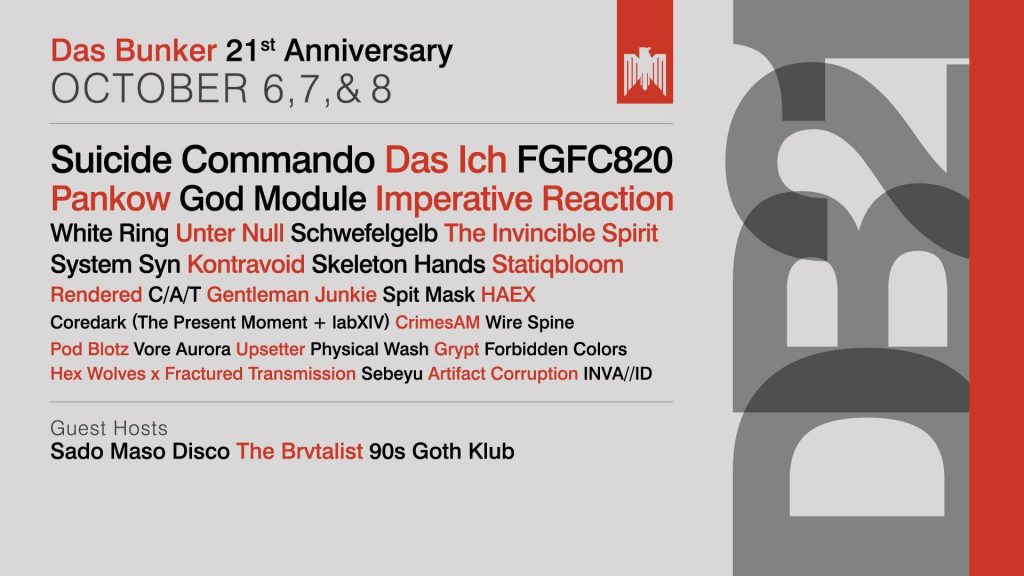 To make up for last year’s absence and check out some insanely hot goth chicks, I committed myself to make it to at least one of the two nights of the 21st anniversary. I missed out on night 1’s festivities, headlined by Suicide Commando to see Obituary at the Teragram but as a metalhead, I feel the need to catalogue the differences between the metal and industrial scenes. Metal dudes are cooler than industrial dudes but industrial chicks are WAY hotter than metal chicks. Seeing as industrial dudes are more intelligent and less shallow than metalheads, they might think I’m an idiot for holding such bottom-feeding opinions, but still, I plead with them to take it as the compliment it probably isn’t. 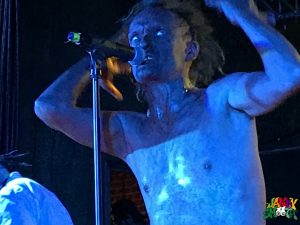 I was one of the early kids at the party and so, realizing the sorry state of my life, I was in the perfect mood to hear something cyber. Every room of Union was utilized, from the teeny-tiny room holding 90’s Goth Klub to the slightly bigger dance DJ room, to the small stage in Jewels’ room and finally the big boy stage up stairs. Mobility always makes a concert feel more adventurous.

related content: Chelsea Wolfe: She-God of Luciferian Witches And Other Soul Harvesters At The Regent 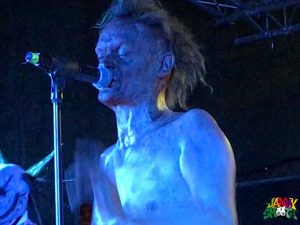 The first act that I paid mind to was INVA//ID (Invallid). He was a one-man industrial wrecking machine, manufacturing heavy dance beats with that crusty Ohgr voice every industrial fan loves. An ugly voice oddly complements beautiful music to make something completely futuristic and alien.

Gentleman Junkie was next, upstairs on the main stage. Their dance beats were riveting with that classic industrial high-drama cadence in their vocals. You see, a lot of these songs are about the end of humanity, so the songs shouldn’t be taken with a grain of salt. Part of you should be deathly afraid while swiveling on your boot heel. During one song, they incorporated middle eastern and middle ages rhythms, and that’s something I love to hear goth or industrial bands do. See Dead Can Dance and Wovenhand.

Down below, Kontravoid was going totally apeshit. He was really the first artist of the night to bring the intensity up a notch. With flashing strobes covering him in either total light or darkness every other second, it was hard not to get completely absorbed into the fast-paced, hard-punching EBM.

Italy’s Pankow were fucking incredible on the main stage. What a real industrial experience should feel like: totally transportive to Europe. With such monstrous power coming out of such a small machine, the duo had everyone buzzing with dark vibrations. Their projections were by the far the best, most thought-provoking, I had every seen accompany an industrial act. The set began with the words “Never trust a white man” projected behind them. One song about fear had a video that toggled between every imaginable phobia from Dipsophobia to Iatrophobia to Rhypophobia. My favorite song of their whole set was their latest release “Blockupy” (block + occupy). With confrontational political satire, Pankow goes above and beyond, to sing lyrics like “I’m only a rapist, I’m only a bigot… I’m just a white ordinary man.” All in all, they were an absolute treat to see and had a certain Berserktown flavor that made me feel wonderfully nostalgic.

The next band to take the main stage, Imperative Reaction, played their first show at Das Bunker 21 years ago. And though I had never heard of the band, they’re actually kind of huge. Which is the funny thing about industrial music, the bands L.A. takes for granted are HUGE in Europe and other parts of the world. They just absorb electronic music more readily than we do. That said, Imperative Reaction made powerful, future-pop that had a more metallic and bombastic flavor than your daddy’s industrial. The band was comprised of Clint Karney on keys, Trevor Friedrich on drums, and Ted Phelps singing. Phelps is filled with piss and vinegar running through his veins, taking command of the stage with total dominance. It truly felt like music for the future. 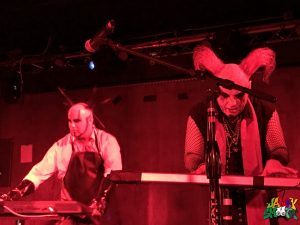 I had first heard of the headliners, Das Ich, last year after seeing a concert poster of theirs and researching the band to get a glimpse of their madness on Youtube. I soon learned that no video can capture what they do live. I was totally set on only staying for fifteen minutes of the set after starting to feel ill and exhausted but then, standing at the very front, the band’s craziness put a permanent smile on my face and I couldn’t budge from my spot until the set was finished.

Das Ich is comprised of Stefan Ackermann and Bruno Kramm and are considered part of something called “New German Death Art“. I thought I had seen everything until this, going to 2-3 shows a week, but this shit reminded me why I get my ass to shows this often.

Having a theater background that gives him mastery of his body, Stefan channels some kind of homeless hell-spawn in his performance. Painted up and dressed in red, he’s not human up there, he’s deity and the nonverbal messages of his movements are very angry, critical, and challenging of God. He casually gestures at the sky, as if he’s talking down directly to God. His eyes dart manically, his limber body wiggles and wrenches like a devil, and even though it’s hard to describe exactly what you’re seeing, you do know for sure, that it IS evil. Electrically evil.

I take back all the shit I said about the scene and every reservation I had about Das Bunker, this night was undisputedly cool. For giving me the chance to see Das Ich, I thank Das Bunker a million times, praising Satan for letting it be born into the world 21 years ago.