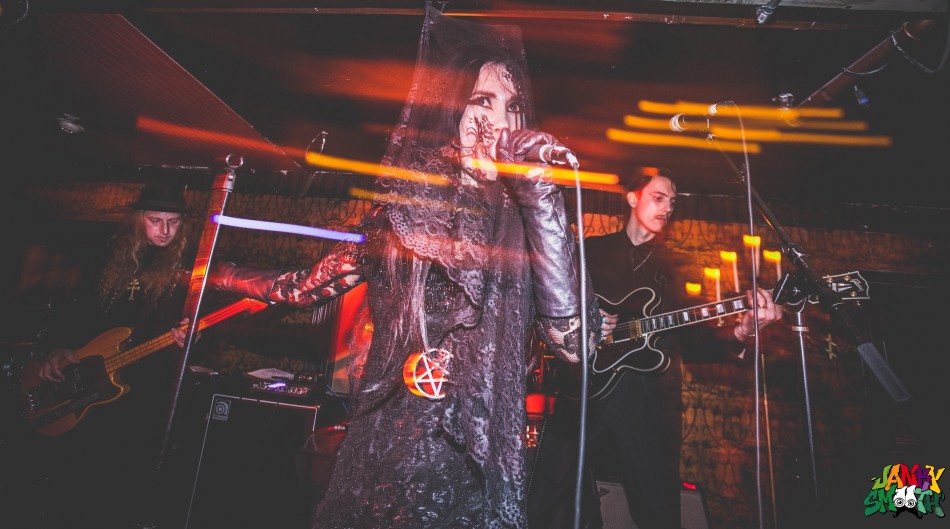 I was a Catholic boy/ Redeemed through pain, not through joy.
Now I’m a Catholic man/ I put my tongue to the rail whenever I can.
Jim Carroll, “Catholic Boy”

Still feeling those post-Halloween blues. There’s nothing worse in adulthood than the end of the most mischievous night of the year, followed by the prospective onslaught of family holidays for the next two months. Particularly when you’ve had a good Samhain, the kind that has you making love to ghosts, and stirs your dead-belly energy to remind you the world isn’t some grey financial dead zone ‘til the grave. Writer Paula Guran once wrote, “The farther we’ve gotten from the magic and mystery of our past, the more we’ve come to need Halloween.”

My Halloween in this foul year of Our Lord, 2017 (fouler than last, but who could’ve seen that) was spent in the speakeasy dungeon of Madam Siam below Hollywood Boulevard—more catacomb labyrinth than cocktail bar—with no cell service, and plenty of great beasts. It was a night honoring hip Satanist guru, Anton LaVey, and the 20th anniversary of his death on October 31, 1997. Thanks to Lethal Amounts (that debauched, counter culture art gallery sandwiched between the Monty Bar and the Teragram Ballroom), the joint’s tentacle walls were littered with never-before-seen photos of LaVey and doomed icon actress Jayne Mansfield, along with other personal effects from the famed Black House of the so-called Black Pope. They were taken by photographer Walter Fischer in the spring of 1967, just days before Mansfield was decapitated in a horrific car accident. LaVey’s life, it seems, was rife with unholy providence; not least in the fact that Susan Atkins (who would later go on to be a core henchwoman of the notorious Manson Family) danced topless in a vampire cape during a LaVey strip club revue in San Francisco dubbed, “Witches Sabbath.”

My night started early. I was backstage in the green room, struggling to slip on my black hooded robe. Indie film director Kansas Bowling was already wine drunk on the couch, and donning her hood, while her attached cape did nothing to cover her naked torso. My beau Liz and I were to assist Twin Temple’s set, during which they would baptize Kansas onstage in blood, skyclad at the altar (i.e. ritually nude), in front of the night’s crowd. She was trying to get a signal, unable to text her bud and music video collaborator, Boyd Rice. Experimental-noise musician, Rice was slated as one of the night’s speakers, and has an ethos in the LaVey underworld all his own. That’s when 90-year-old Kenneth Anger lurched into the room, and we were all to clear out so that he could prepare for his lecture. I quietly wondered if all this too was some unholy providence, that one of us could wind up decapitated days later somewhere on Sunset Boulevard. “I fucking love you,” Kansas told him.

After Twin Temple played their love ballad, “Lucifer, My Love,” Liz and I were summoned to the stage, where we guided Kansas, and disrobed her in front of all the witnesses. Crooner Alexandra James began the Satanic Baptism, in the name of Lilith, first woman of the world, and first wife of Adam who was made not from his rib, but of the very same dirt that Adam himself was created from. She refused to obey sexually, or otherwise, to Adam, God, or any other oppressive rule. She willingly courted the serpent of knowledge. 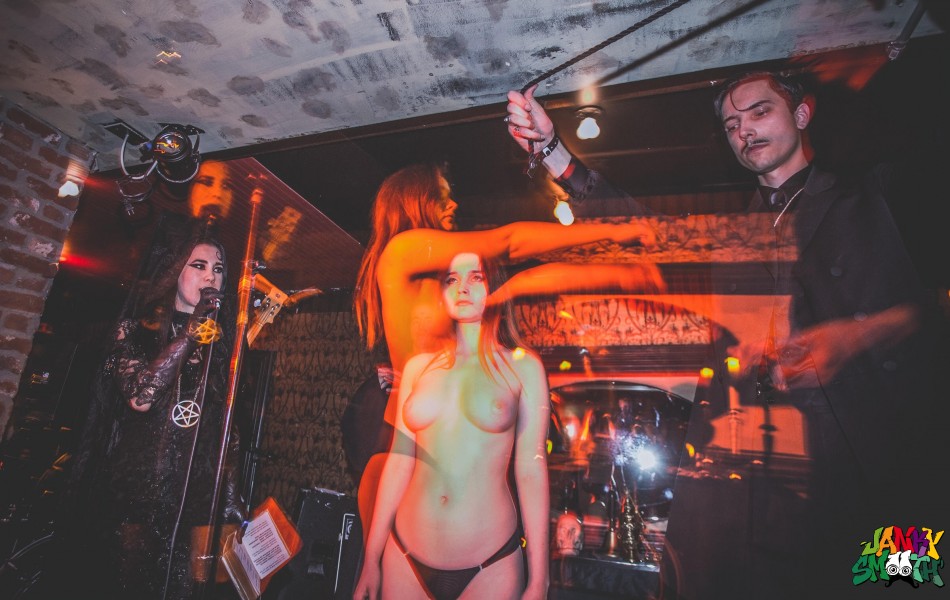 “For thousands of years, the profound sexual, magickal power we hold as women has been feared and violated,” Alexandra preached. “We have been called witches, we have been burned alive, we have been subjugated, abused and silenced. To this day, we see these same crimes committed against us. Though lately, some of these men, like Harvey Weinstein, are finally being held accountable for their crimes. What do you think, shall we burn him at the stake? Or shall drown him and see if he floats?”

After a lengthy dialogue of vows and declarations, Kansas avowed her allegiance to Lilith, with her forehead smeared in blood. The crowd joined in chanting:

Just another night in underground Hollywood.

related content: House of Ho99o9 Halloween at The Roxy

The evening followed with a rather nonchalant chat from Kenneth Anger, who sat in a chair on the small stage in the magic-themed parlor, Black Rabbit Rose, located upstairs that we entered through a bookshelf façade. It was packed wall-to-wall. He spoke about how all his best friends are dead… and that he still speaks to them nonetheless. Sitting in the front row was Boyd Rice, who asked him about (former Manson Family comrade) Bobby Beausoleil, who had scored Anger’s seminal film, Lucifer Rising. Anger responded to the effect of, “Bobby’s still in prison… that’s what happens when you do something like kill someone.” Rice and Karla LaVey, the Black Pope’s eldest daughter, spoke next with a Q&A. By then, we are all far too gone in the packed crowd and booze haze, and I can’t recall anything beyond Rice talking about painting an entire house completely with submarine paint as he dabbed bits of cocaine on his hand and snorted hard.

The event culminated at midnight with a spoken word/musical performance by Steven Leyba, and the flesh-hook body suspension antics of “visceral performer” Jeanelle Mastema. Poetic howls of new world visions and social media demonization and society’s need to evolve, while groupies writhed themselves ecstatically all over Glenn Danzig off in some dark corner.

related content: The Misfits At Riot Fest Chicago 2016: Bats In The Press Tent

It was good to be among subterranean misfits, even if for a night, and not wedged between the incessant static of two (red and blue) competing echo chambers, hellbent on making the world an even more agonizing place. Cut off the data. Indulge in everything carnal. Even if for a night. It was nice—revitalizing—to plunge into some nuance, bad behavior, and good vibes. Even today, The Satanic Temple (est. in 2012 as an antidote to Christian political overreach), and the modern Church of Satan is missing that old rock n roll flair and stylized B-movie kink. As is the case in the new millennium, most things are devoid of any style. The chaos magick and all the dark energy-mystery is lost to these atheists. Cosmology and philosophy are treated as kitschy—if treated at all—as devil horns or ritual theatrics. Cynical as I may be, I’m much less skeptical.

I was raised on Communion, stained-glass stories, and midnight mass. For me there always seemed a thin line between Catholicism and Satanism. I don’t mean a thin line between theism and atheism (though both nonetheless view the universe as mere artifact), I mean it in a more exorcising-your-inner-demons sense. Demons, as in, inner shadows, the only demons there really are, and which most people spend their lives repressing…until one day you’re using a crucifix to jerk off and spewing green vomit all over your loved ones. 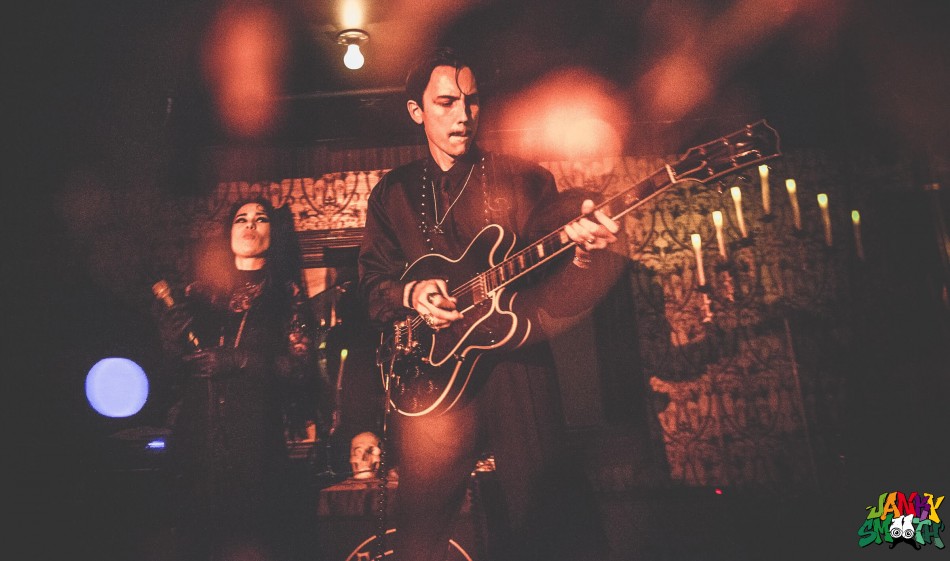 The core tenant to William Friedkin’s The Exorcist (1973), a film loathed by both Puritanical America and Satanists like LaVey, is simple under all its explicit horror: know thine enemy. There’s an ageless proverb in times of war, “If you know neither the enemy nor yourself, you will succumb in every battle.” Knowing is facing, and facing means staring into the mirror. It is when you fail to realize the world is your mirror image, that you begin to destroy it.