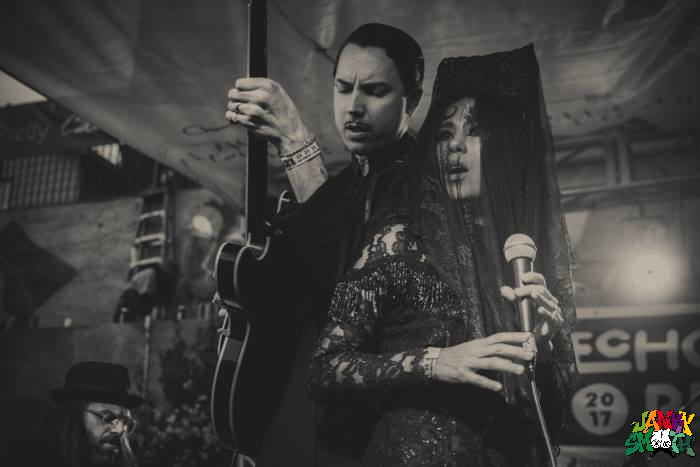 The vast miasma of artists at Echo Park Rising 2017 was an elating reminder of the fact that we’re drowning in a sea of stellar underground rock n’ roll. In today’s L.A. scene, it’s not easy to stand out, though many manage. Luciferian doo-woppers, Twin Temple, is one such act.

In the twilight air of Saturday evening, just days before a historic solar eclipse, the human and spirit worlds brushed each other in a mesmerizing set. Veiled frontwoman Alexandra James and her axman husband Zachary James—swords in hand—wasted no time initiating a proper Satanic baptism to cleanse the soul of humanity. Invoking our old friend, Lucifer: 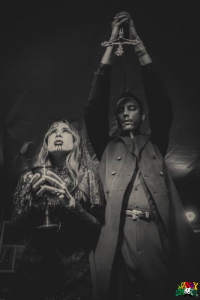 In Nomine Dei Nostri Satanas Luciferi Excelsi
On this alter, we consecrate the chalice representing Lilith’s womb
And containing the blood of Satan
-Swords-
To banish hypocrisy and direct the fire of our unholy will
In the name of Lucifer, ruler of Earth,
I command the forces of darkness to bestow their infernal power upon us.
I bid you rise. Will you all give the sign of the horns.
O hear thy name. Repeat after me: Hail Satan! Hail Satan! Hail Satan! 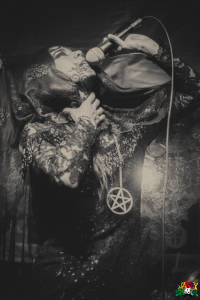 Summoning the archetypal, daimonic forces which bear the light of individuation, and one’s True Will, may seem hokey to a rational 21st century mind, but considering the current climate of militant groupthink, extraordinary problems require extraordinary methods. There’s demonization being cast from “many sides”—as so eloquently put by the Donald—and done so without a hint of self-reflection (least of all from our Commander-in-Chief).

In a recent article I wrote in L.A. Weekly concerning Twin Temple’s ethos, “Squares in the ’50s would’ve lost their minds over the suggestion of Satanic doo-wop, but these days it’s practically a necessity.”

Ignorance and hypocrisy abound in the age of Trump, and in the political ascendance of puritanical Christians, whose predecessors burned heretics at the stake with righteous smirks and good intentions. It’s of course vital to meet neo-nazis face-to-face in the streets, but more crucial is it to strike at the heart of this psychic epidemic. We must never forget the great (perhaps only great) American political tenant of separation of church and state. “This is a Christian country!” is something you’ll hear right-wing diehards cry out in their eternal struggle against their contrived ‘persecution’ (*cough* playing the victim).

Some of you may have already noticed the Twitter shenanigans of the Church of Satan to be the best lampooning of today’s political-religious establishment (sorry Trumpers, your wannabe billionaire boy is now representative of the establishment, particularly in light of him proving himself as just another war whore). Ironically, Protestants have yet to fully grasp the concept of a personal relationship to Jesus Christ.

The KKK considers themselves to be Christian Soldiers. Christians need to take responsibility, not pass it off onto supernatural scapegoats.

White supremacy has nothing to do with Satanism. Satanism is an individualist religion and we reject all forms of collectivism. 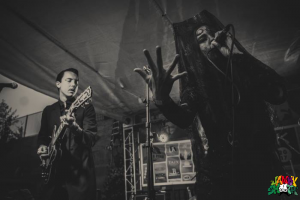 I mentioned individuation, which is, according to Carl Jung, the process by which the personal and collective unconscious are brought into consciousness to reveal one’s whole personality. It is the process of becoming self-actualized.

When L.A. underground filmmaker and curmudgeon mystic, Kenneth Anger, made the seminal Lucifer Rising in 1972, it was the first big film about magick; its plot revolving around Egyptian gods summoning the angel Lucifer to usher in a new occult age—in accordance with the principles of the Ordo Templi Ororientis. The OTO is an occult order founded by the infamous Aleister Crowley, who promoted a New Æon in human thought, culture, and religion. The Æon arises from a single supreme injunction: the Law of Thelema, which is do what thou wilt. 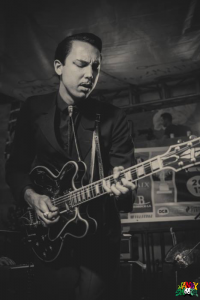 In other words, a new paradigm in which listening to one’s inner voice—one’s Will—rather than herd consciousness takes precedence.

Political revolution doesn’t mean shit unless with it comes a spiritual revolution, otherwise all you’re doing is tending to symptoms instead of the underlying cause.

Music itself no doubt heals mind, body, and soul. But Twin Temple’s public ritual and subsequent set had intent: a wicked prayer for us all to come into accordance with our individual Will, rather than relying on the direction of others. To cultivate an environment of mutual respect and trust.

The voodoo jazz to follow was enough to seal the deal. Alexandra’s confessional love serenades to Satan himself are more a cry of self-adulation, and a reclamation of one’s own experience. If anything, it’s not, as puritanical squares may infer, some archaic worship of a literal boogieman here to corrupt us all. As Jung also said, the Christian mind will always be neurotic because it does not make room for the shadow self, ‘the Devil’ inherent in our psyches. This kind of hubristic repression only leads to the delusive horrors our world is haunted with now: war, hate, division, and violence in the name of God. 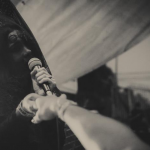 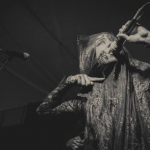 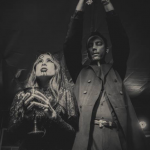 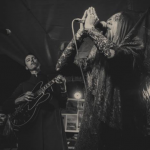 Twin Temple’s sound, by contrast, is one of spiritual communion and romance, exuding inner strength, patience, and grace. Alexandra and Zachary James, sparring off in unholy matrimony, make you believe in romance again the way Gomez and Morticia Addams make you believe in romance: in an ecstatic embrace of our macabre fate, as exemplified by Alexandra’s signature move clutching a skull in front of the audience. In momento mori, as the dictum goes.

It was at the envy of everyone else that at the end of the set, one our Janky own, Lauren McKnight, was chosen from the crowd to be baptized in blood. And may we all be as sanctified and purged of negative outside influence. In the meantime, listening to Twin Temple will do just fine. 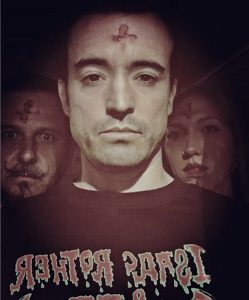 For it is through the more complex musical arrangements of Twin Temple that the archetypal garage rock spewing out of the primordial ooze of artistic inspiration rampant in the City of Angels, that we are able to address the more complex psychological and emotional structures that exist in the mind of the organic sacks that host these thoughts.  For Satan himself was an angel and until (wo)man him/herself acknowledges the darker parts of it’s nature, we are doomed to have the airwaves dominated by self delusional dances and sounds that deny the very nature of our existence.