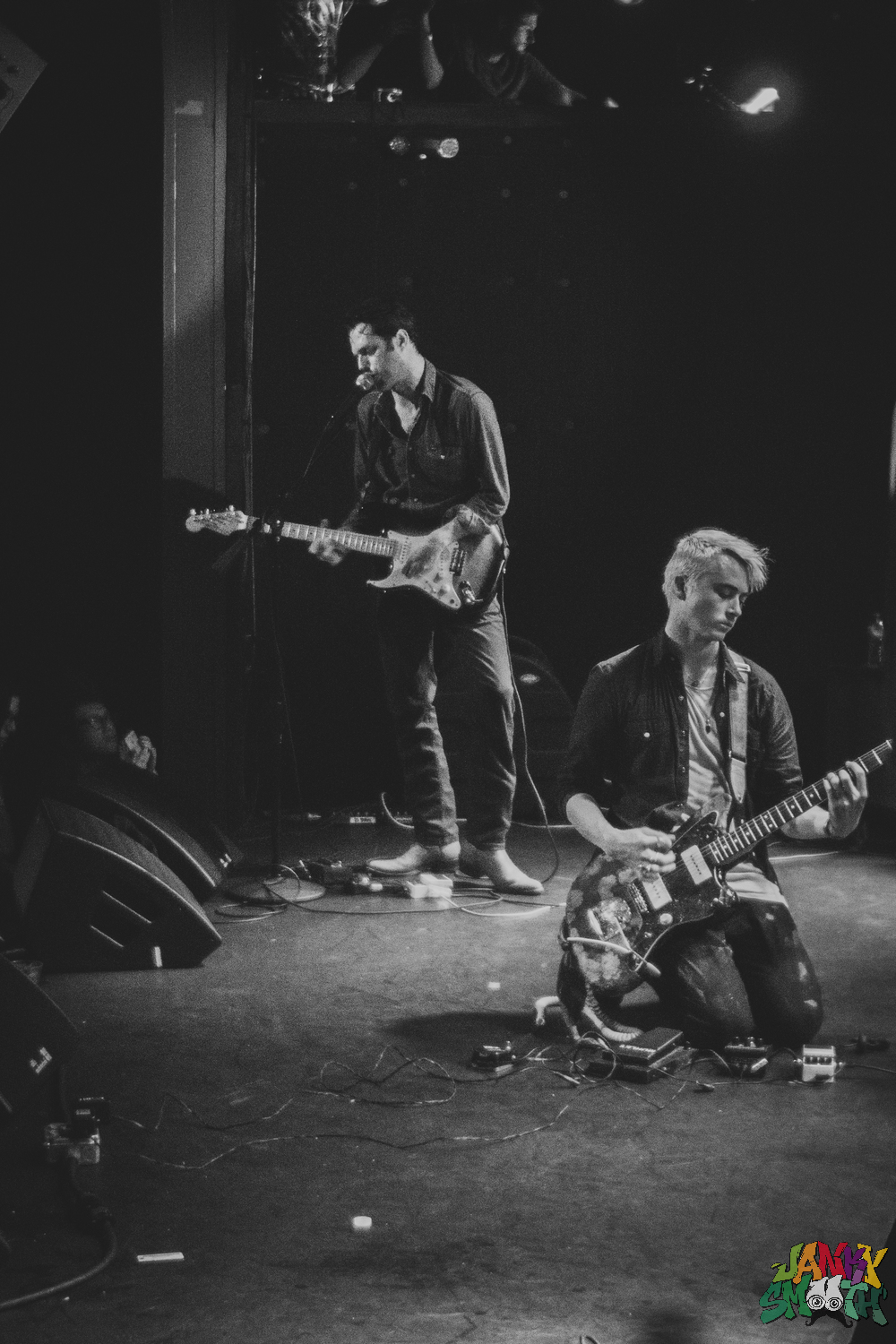 Arriving at the Teragram Ballroom on 7th Street, dodging traffic, skate rats, and the regular stream of Monty Bar freaks, I dipped under the sleek, neon blue marquee, through the main doors, and into the archway of the foyer where Destruction Unit release party event collaborators Critical Resistance had a table amongst all the merch. I was just in time to see the opening acts spew death metal and summon the Devil in guttural tongues.

It was the record release party for Destruction Unit’s long-awaited album of concussive rhythm and psychedelic overdrive Negative Feedback Resistor (Sacred Bones Records). In a word? Shit was lit.

There were lots of freaks and aliens, but not as many as I expected. Or maybe it was just a perception thing, since the Teragram is deceptively big for only having a capacity of 600. There always seems to be tons of room whenever I’m there, while being intimate at the same time. The Teragram is little sister to New York key players The Mercury Lounge and Bowery Ballroom, and got its name from owner Michael Swier’s late wife “Margaret” spelled backward. It’s hardly a planted flag for New York, rather it’s among the few venues challenging those being bought up all over Southern California by promoter giants Live Nation and AEG Live. Along with the recently revived Regent, and despite being off the beaten path, it’s quickly become a favorite. (Though I’d recommend a flask, the $5 PBR’s are as good as it gets.)

A big highlight was running into the boys of Ho99o9. We chatted a bit about how awesome the European crowds they played were, and how there was still nothing like a good, dirty L.A. show. (Sidenote: TheOGM confirmed they have mad love for Janky, because “those fools give mad love to us, every show!” All you need is love, kids.)

In between searing sets from LOCK, Arizmenda, Blazing Eye, and Volahn, the four inverted half-dome lighting fixtures illumined in a dim, pale light that gave off an eerie, spaceship-like ambiance. As it neared time for Destruction Unit’s set, the place began filling up more and more with goths and L.A. punks seeking some organic acid trip, like pupils to a guru.

It was a night that challenged both the physical and nonphysical boundaries of our socio-political world. 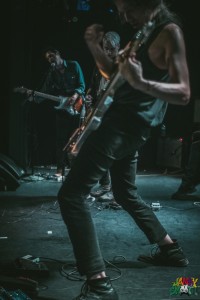 Critical Resistance is a grassroots organization taking on an abolitionist approach to the prison industrial complex (PIC) problem. That is, they don’t seek to ‘improve’ the current police-surveillance-imprisonment system, and its political and industrial ties. After all, the system works exactly how it’s supposed to work—containing, controlling, and killing as solutions to social and economic problems. Instead, the Critical Resistance vision of cultivating strong and healthy communities comes from eliminating the old model altogether, and cultivating self-determined communities that invest in schools, job training centers, youth centers, rehabilitation facilities, and housing instead of more prison beds that private corporations ultimately profit from. The way the prison system has recently (and finally) been scrutinized in the press, and with disturbing figures like California being the #1 state in prison spending—and 49th in education spending—it seems that Critical Resistance and other organizations like Los Angeles No More Jails Coalition (LANMJ) are on the right side of history.

In the spirit of abolition, and blasting down walls to erect new ones, let’s get to Destruction Unit. 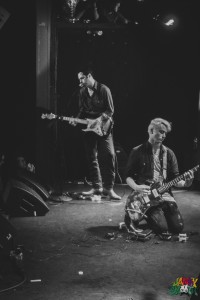 Danny Baraz wrote a most astute review of DUnit’s new album, and the experience of seeing them live. On the Sacred Bones website, the band declares, “This is crazed-psychedelic-freek-noise guerrilla warfare and these are our streets. The pigs of the law can use their system to manipulate and censor our messages. The control creeps can keep their airwaves safe and comfortable. But none of them have been able to make us turn our voices or our guitar amps down.” Suffice to say, I came ready to have my skin, bones and every molecule in my body blown to bits.

Destruction Unit began their assault without so much of a hello. Frontman/shaman Ryan Rousseau’s position on stage immediately exhibited the band practices what it preaches. Standing blissfully immobile, playing far off stage-right, his presence and vocals took the backburner position to the blasting sound waves that were unleashed by the five heavy mystics from Arizona. 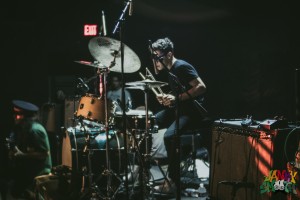 Though the band was his brain child a decade ago, Rousseau’s ego isn’t in it. After all, chopping our egos down with six-stringed battle axes was the whole idea that night. Experimentalists Nick Nappa and Jes Aurelius were doing most of the thrashing and contorting their bodies around the stage in total ragdoll status, as if the sound was driving them. I gotta say, and I have no shame in admitting it, I was man crushing hard on Aurelius. How could you not? He was all mean androgyny, big lips, unruly hair, and out of his mind munching on his effects inputs/receivers? For all I know, it was equipment from the 4th dimension. Sorry, but man buns can’t touch this shit. 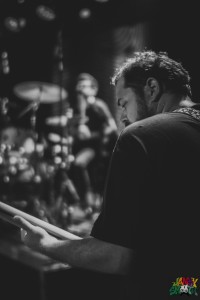 Bassist Rusty Rousseau and drummer Andrew Flores (shades on) kept the sound grounded. Their chaos is more controlled, rooting it all earthbound while the not three, but four guitars blasted off into hyperspace.

It’s a sound alchemical in nature, something that isn’t speaking to our conscious mind, but to our subconscious, or supersensible perceptions with which we’re all intensely (and scientifically) connected. Music’s a mathematical art, and there are certain parameters to abide when attempting to achieve a particular effect, or genre. But to create new equations, new hypotheses, new paradigms, and new rips in the spacetime continuum, bands must let loose the chaos one-by-one, eventually coupling several idiosyncratic parts in spontaneous, harmonic discord. I never got to see Sonic Youth in concert before they disbanded, but I imagine that’s what audiences experienced when they would let their songs stretch out into other planes. DUnit doesn’t put on a “show” or a gimmick. They’re not neon sign psychics, these wizards live in the desert. I’d liken the show more to a series of droning melodies and blasted feedback specters that penetrated and purified the sludgy corridors of our minds; with sudden bursts of darkly-fun, punk rock psychedelia. But not like Tame Impala psychedelic, more like, y’know, Charles Manson psychedelic (shout out to the no-wavers). 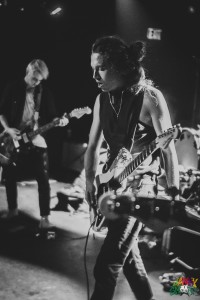 Call it what you want, but it managed to dispel the agro tendencies of hardcore L.A. punks. Slam pits would start and then immediately dissolve into big, gaping black holes like bottomless pits; everybody just standing on the edge of the void waiting for someone, or something, to fill it. It was more out of reverence, like when no one clapped after Lincoln gave the Gettysburg address (‘member that?!) Some things are just too sacred to crudely applaud. And then I also considered where the hesitancy, even fear, was coming from—a place of every structure in our programmed heads being totally eradicated. It solidified the band’s unpredictability factor, and proved the punk genre is more than malleable. Destruction Unit is a psychic wrecking ball in the new American heavy underground coming right for you.

After becoming possessed and writhing in their force fields of sound, they started packing equipment up before the buzzing even stopped. It took everyone a minute to realize it was over, which may have been the point. No hello, and no goodbyes either. No beginning, no end.

My ears were ringing, reminding me it had been months since a show blasted my head like that. Sonic Youth came on over the PA as the lights came up and everyone bled outside. How fitting.

You can listen to and download Negative Feedback Resistor at Adult Swim for some awesome reason. Buy the vinyl at Sacred Bones. Dig in at your own risk.