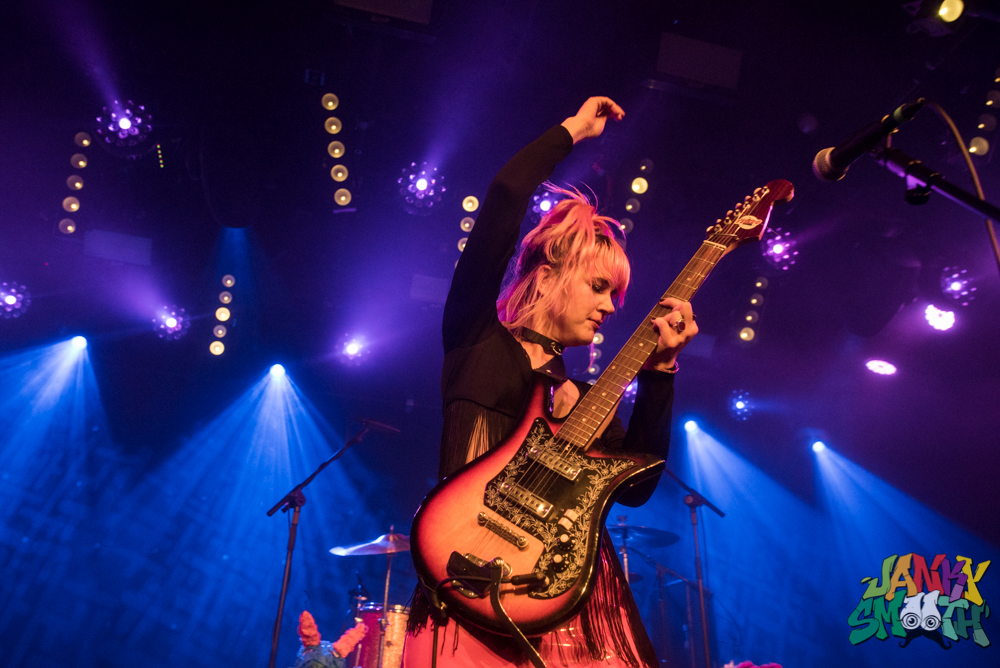 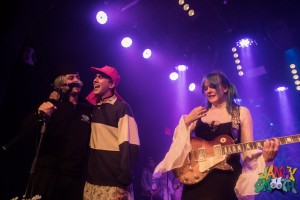 Member of No Parents join Bleached on stage at The Teragram

There are certain taboos in modern day, independent music journalism which you don’t breach, for any reason, lest you be nailed to the cross of insignificance. You don’t speak ill of Ty Segall, John Dwyer or Mac DeMarco, never say anything negative of Low End Theory and never play cards with a guy who’s named after a city. Then again, if classic day journalists from Rolling Stone were able to trash Black Sabbath and Zeppelin and continue to increase their circulation despite saying Jimmy Page was “a very limited producer and a writer of weak, unimaginative songs.” I have very little fear of being judged for “getting it wrong” and most of the time, I’m willing to go out on a limb if I believe in what I’m saying. I think I was the only person who reviewed Tame Impala’s “Currents” that didn’t put Kevin Parker’s musical pee pee in my mouth. And now that I’ve had more time with that album, I stand by every statement, even though 3 or 4 songs on that album have grown on me since the time I reviewed it. That being said, saying that I’ve always thought the band Bleached and their live show fell flat for me almost every time I’ve seen them is not quite on the same magnitude of Robert Christgau stating that “…there are better beats on the damn Jadakiss CD”, About Daft Punk’s seminal release “Discovery”.  I just wouldn’t want to say it too loud at The Smell or The Observatory. I’ve read that Bleached feel they are all about their live show. Well, tonight, I’ve specifically come to see them play them new songs. And I like them new songs. A lot.

Last night, Bleached, No Parents and Feels played the Teragram Ballroom on the fake holiday of Cinco De Mayo. There is no room in town that sounds as good as The Teragram Ballroom. If your band is good live, then you will sound even better at The Teragram. And that was certainly the case for Feels. I’ve written about them so many times now that trying to find new adjectives and imagery to describe them is an exercise in writers block. No Parents at Teragram Ballroom by Taylor Wong

To call No Parents “Pop Punk” does a disservice to the intensity and fury of their sound. The levity of some of the lyrical content contains a lightheartedness not present in your traditional, anarcho and hardcore punk but when you see lead singer Zoe heaving snapchatting fans off the stage, there is a murderous look in his eyes that would not fly in most popular music. Now, with this band, I have always liked the live version of No Parents songs more than their studio counterparts. I think it’s because there is less reverb on the guitars live than there is on their records. And while “reverb soaked” is a pretty typical way to describe the guitar tone of many of the indie bands rising through the ranks right now.  Not to say that bands should mimic any type of prototypical sound but I think it maybe the reason I like No Parents so much more live is there is less reverb in their guitar tone which makes them sound much more precise. Much more ferocious. The song, “Die Hippie Die” was the perfect example of what I’m describing from Thursday night’s show. 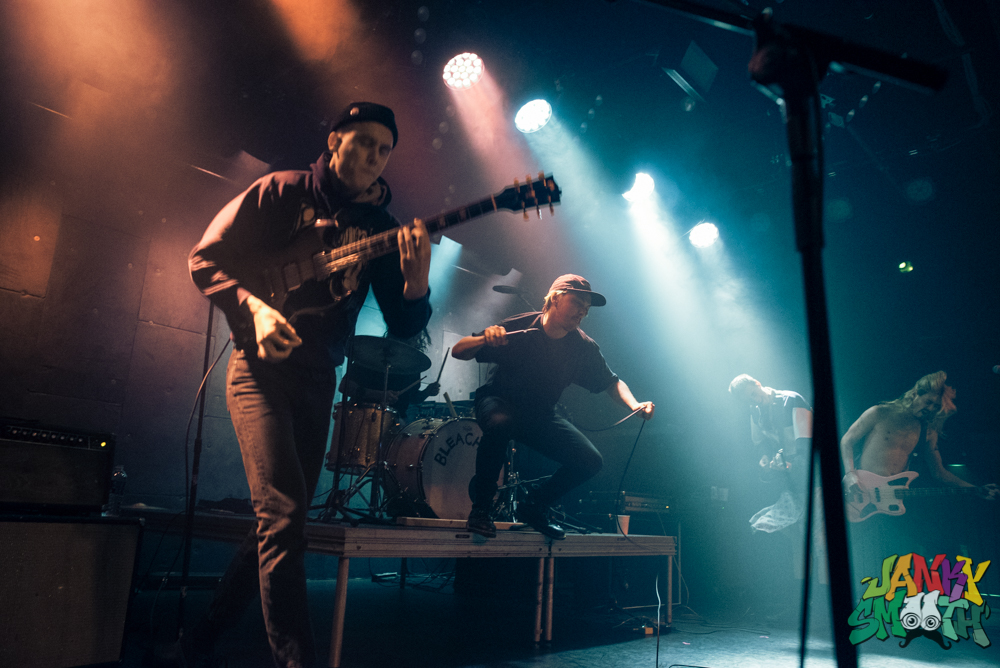 No Parents by Taylor Wong

All throughout the evening, bands gave ode to the 818. The Clavin sisters, All of No Parents and Laena of Feels are proud San Fernando Valley natives, saying with pride from the stage of the Teragram what people used to deny in the surf lineup in the breaks of the Santa Monica Bay. 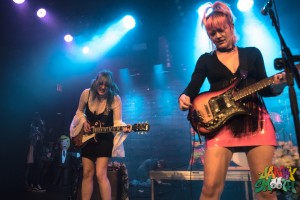 Bleached walked out on stage to Metallica’s “For Whom the Bell Tolls” vibrating the PA at the Teragram Ballroom. It’s like our third eyes could clearly see early Calvin sister childhood jam sessions in some converted, San Fernando Valley garage with carpet on it’s walls and least one mullet in the room. But it seems like Bleached, starting with the band, Mika Miko outgrew those city limits pretty quickly because it feels like they’ve been around for a long time now. I’ve always understood why teens and pre teens were instantly drawn to them with their Go Go’s charm and pure power chord assault. The few times I had seen them live, they didn’t grab me in the chaos of festivals but when the new album came out, the sounds emitting from the speakers seeped into the little voice that sings hooks in my head all day long.

Bleached didn’t wait for the house to turn down the old school thrash metal before the drummer started counting off.   The band ripped into songs off of Welcome the Worms like “Keep on Keepin’ On” and “Sleepwaking”. 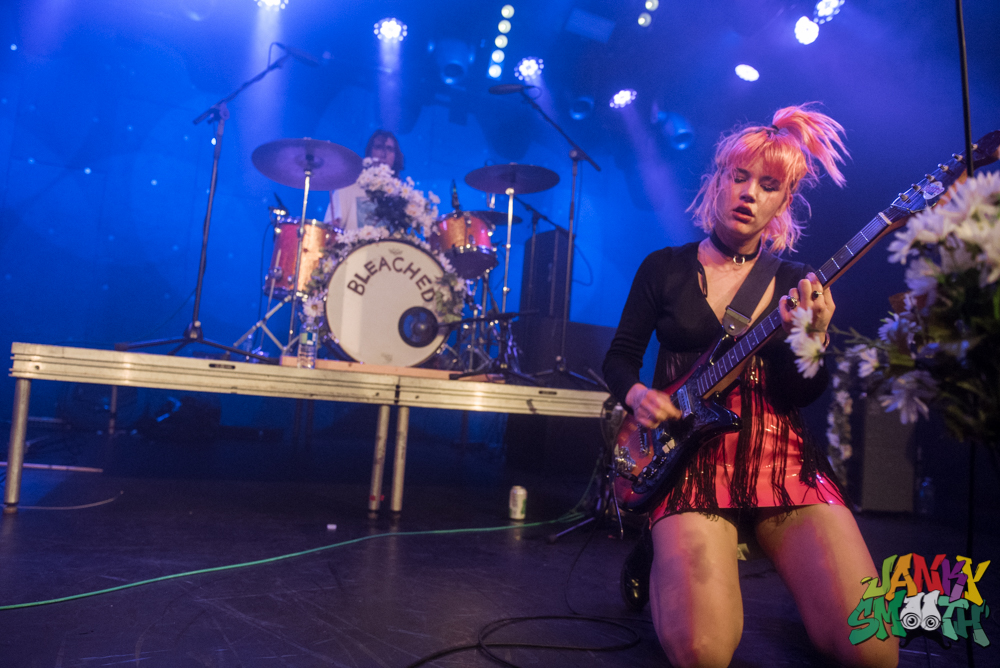 “We’re playing with a bunch of bands from the valley!” yelled Jennifer Clavin with a humble charm, a hot pink mini skirt and more than a hint of Belinda Carlisle, if Belinda Carlisle were ever cool enough to like Metallica’s Ride The Lighting album.

When the banter was over and the music started playing again, I had my first, live “moment” with Bleached when they absolutely NAILED “Wednesday Night Melody”. The rest of the set was tight and filled with a loose atmosphere that led to Zoe Reign coming out on stage and joining Jennifer Clavin on the now staple Bleached cover of The Misfits, “Hybrid Moments”. It was a duet made in a punk rock bubble gum dream of sunset strolls down Ventura Boulevard. Bleached have been on tour with No Parents the past weeks and if we were a tabloid-esque publication, we might talk more about the magnetism between the lead singer of No Parents and the lead singer of Bleached.  Eventually, all of No Parents were on stage jamming with Bleached and the sock hop poppin’. 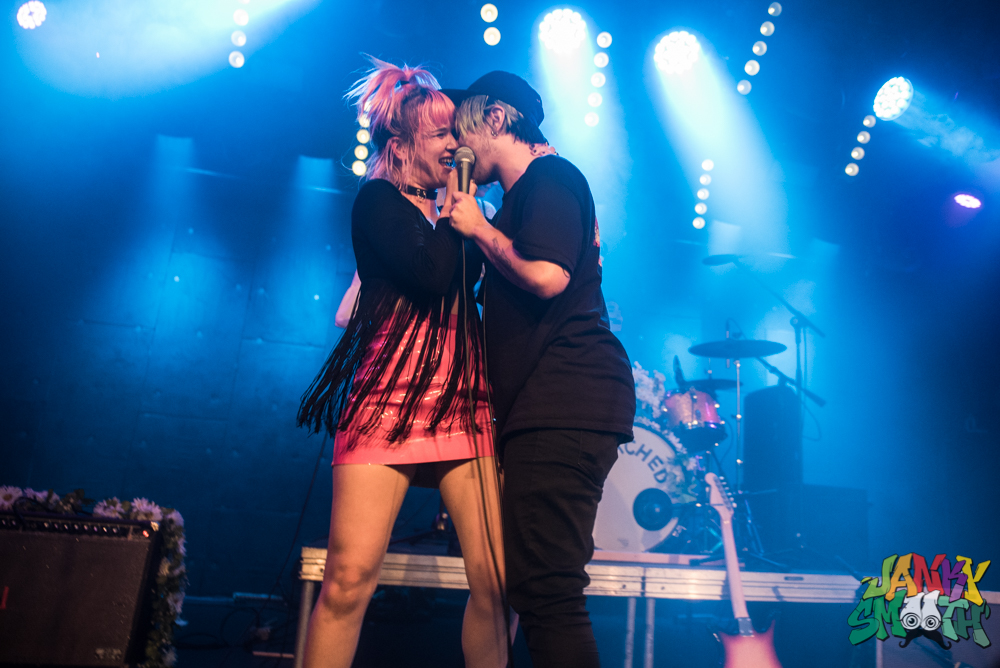 It was a super fun show on a beer holiday that did not require the manufactured occasion as an excuse to get piss drunk and jump around the pit. The San Fernando Valley is as Los Angeles as Hollywood and Beverly Hills to people who grew up here and to watch L.A. born bands like Bleached come into their own is just another killer addition to the many brilliant bands nurtured by this weird ass paradise.