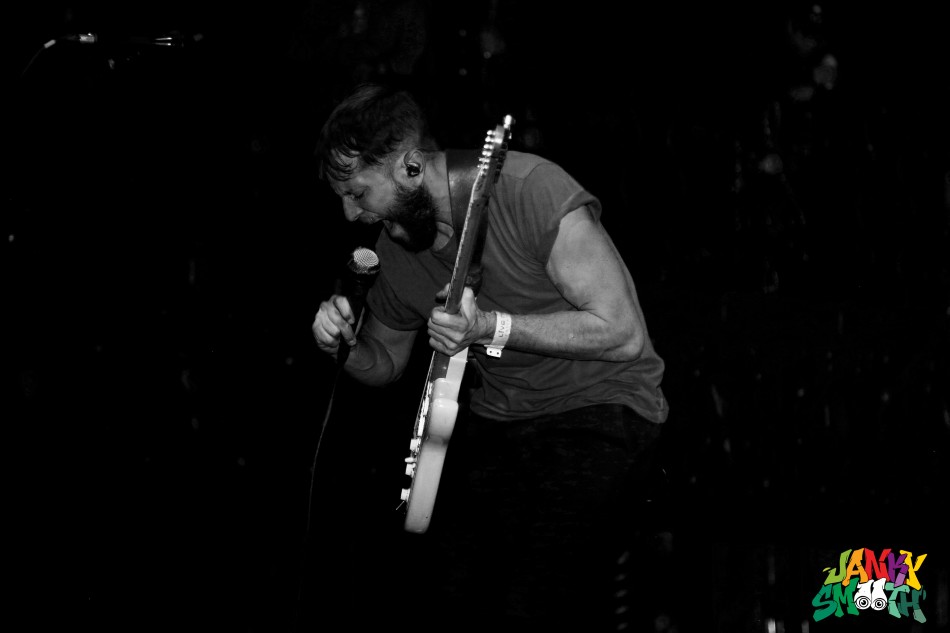 As yet another one of 4,397th “Save the Smell” benefits is in the books and we prepare to present to you the review of all the extraordinary talent that agreed to perform at the cavernous Belasco Theater, the throwback Los Angeles venue that cost more to restore and renovate than even the $1.4 million The Smell custodian, Jim Smith is trying to raise to secure a permanent location for the iconic, All Ages L.A. clubhouse for music. 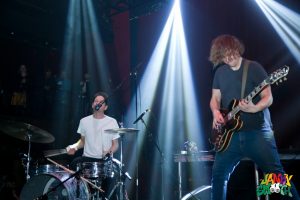 We wanted to remind The Smell cynics that Smith has run the multi generational art incubator for 19 years without any apparent profit motive in sight. So as the hum of jaded hipster whispers asking rhetorical questions about where all the money is going grows louder, it’s important to remember what the Smell has given 4 generations of burgeoning, pre-ID, DIY kids whose parents felt curiously comfortable dropping off at a location that 19 years ago was surrounded by the swarming transient citizen population of the Downtown L.A. hopeless and the homeless.  Some of the most iconic cult music heroes that were born within the very walls that make what the kids of today would refer to as a “safe space”… The Smell.

I’m a cynic by nature myself but I’ve also learned that while it’s IMPOSSIBLE to investigate what’s truly inside someone’s mind and heart, it’s relatively easy to investigate the evidence of their actions. When I asked Jim Smith how much money was raised by having Ty Segall, Best Coast, HEALTH, Bleached and No Age play this latest permanent building benefit and retrospective of perspective on who and what The Smell created, Smith had no hesitation or hedge in telling me it was in the neighborhood of “$21,000”, a lot of money to grumbling haters but a mere blip on the road to a MILLION. 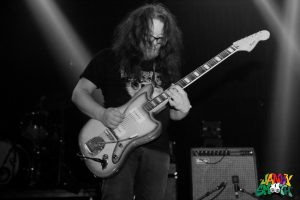 While I’ve already written all I’m going to write on the historical context of the Smell and what it means, not only to nurturing the future demi-gods of independent tunage but to the very cultural significance to GREATER Los Angeles itself, I’ll remind the skeptics that 19 years is MORE than enough time to expose hidden agenda’s and nefarious plots of personal gain.

Most people can’t conceive of how powerful they really are to affect their immediate environment, not to mention the world, at large. So, as your perceived deficiency to manifest your desired reality infects your own thoughts with speculative but in this weird world, justified negativity, others struggle to bring balance to the evidence in the narrative that suggests all is above board. The most conclusive circumstantial and anecdotal proof of pure intent in this mountainous obstacle to keep DIY space alive in the growing corporate chain store environment that has risen from the beaches of Santa Monica, to the rising property values of Highland Park, of all places is- The Smell hasn’t changed much in 19 years.  No moves for liquor licenses, no big renovations, no opulent marquee and no bigger name acts unless it’s an act that got it’s starts there.   Giving Jim and The Smell the benefit of the doubt is the right thing to do if you understand how much he’s sacrificed in dedicating his time to a cause that yields little financial gain. 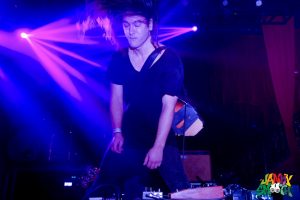 HEALTH- Death Magic at the Belasco

Feeling is just as important as thinking, even though Cable News Stations and Pharmaceutical companies in America discourage both. I’m not one to suggest intuition is to be ignored but intuition without investigation is tabloid fodder and it’s the explanation for why the Kardashians are akin to American royalty in this country.  The reason why the Smell is so important and the reason it’s survived longer than any DIY space in the 169 years since Los Angeles/Califas was officially purchased by the U.S. government IS that sacrifice.  It’s why bands that are at the peak of their powers and popularity such as Best Coast, Ty Segall, HEALTH, Bleached and elder statesmen such as No Age have no hedge when asked if they’d play mere ½ hour sets to help the cause.  Even with the ascending meteoric rise of music man, Ty Segall, he would agree to play second that night at 6:45pm, even though a headliner spot could’ve easily been justified in a city whose adolescent worship is focused on him, at the moment. Alas, we didn’t make it in time for Ty, goddammit.  In lieu of video and photos of the debut of the newly formed, Ty Segall and the Freedom Band at the Belasco, check out this first full performance from the secret show, playing secret songs with a secret release date NOT associated with the self titled album coming out the 27th of this month. 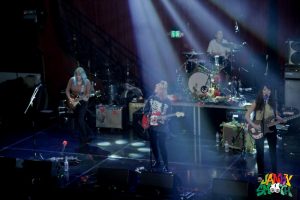 I got to The Belasco in time to see Bleached’s full set and it was one of the best gigs I’ve seen them play.  It was evident that Bleached spent a lot of time on tour in 2016 and the highlight of their set was when they gave homage to The Smell and the history of Bleached by playing a song from the original incarnation of Bleached who, at the time, were called, Mika Miko.

I was actually most excited to see dark vibed dance, electro noise outfit HEALTH who recorded their debut LP inside the confines of the concrete and brick walls of The Smell.  HEALTH played a majority of songs from their latest effort, Death Magic which was perfectly fine with me since I REALLY love that album and the last time I saw them was at FYF in 2015 when technical difficulties cut the set short.  HEALTH is a band I’ve seen many times in wildly varying types of settings including a handful of club shows over the years up and down Southern California with old school mates and collaborators, Crystal Castles.  There are fewer bands born in Los Angeles that I consider more innovative and experimental in electronic music and Death Magic is one of the few records described by critics as “maturing as artists” that I actually agree with. 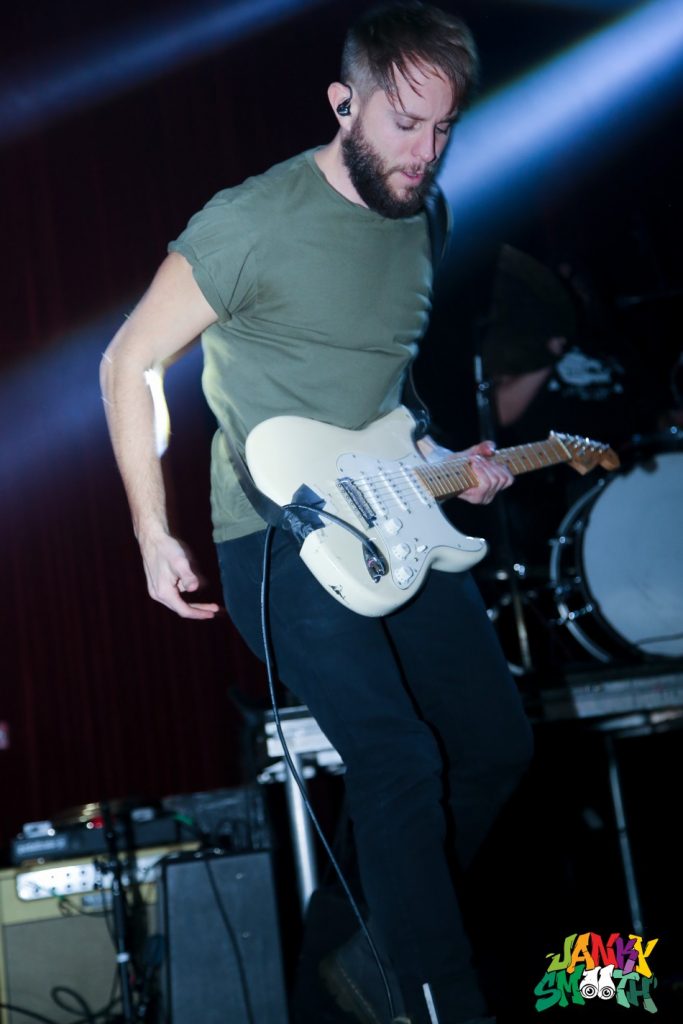 HEALTH at the Belasco Theater

The only other act playing that night that drew as big of a crowd as HEALTH were Best Coast. Bethany, Bobb and Ali  have experienced a huge gain in popularity and respect over the past couple years and it’s all well deserved.  Best Coast played a light hearted set in appreciation for the venue they clearly covet as a big reason for their success. 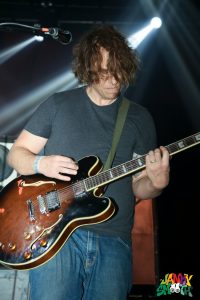 No Age have already played a number of benefits for The Smell since the demolition notice was posted on it’s doors.  I believe they were the first TRUE success story of the Smell.  A search on YouTube would reveal other bands like The Locust playing the Smell before No Age became the cool kids of the scene and eventually, the world.  But it’s clear that they’ll never outgrow or lose sight of what it means to them.  With an artists touch, Randy Randall plays riffs and rhythm guitar with more melody in the chord progressions than many singers have in their vocals.  It’s extraordinary.  The No Age boys played to an audience that slightly thinned out after the Best Coast set ended but those that remained bobbed their necks and banged their heads harder than any other band’s base that night. No Age rocked some new songs that sounded perfect and in this ADD atmosphere and onslaught of endless bands in every genre releasing music every day, No Age have handled the up and down nature of fan favor like pros that know that all they have to do is release a great album to regain our attention.

Missing Ty really sucked at the time because I had no clue I would have another opportunity to see him and the new Freedom Band with Charles Moothart slaying the drums in just a few days.  But the early set time and half hour duration of music allotted to each band that night spoke louder about how bands feel about The Smell than any interview or op-ed could ever reveal.  And that’s all I have to say about that…

Read our exploration of the sordid past in our retrospective on L.A. and it’s history with DIY spaces like the Smell that was written after the LAST benefit for the Smell that Janky Smooth covered at the Teragram Ballroom, you can visit Save the Smell archives.