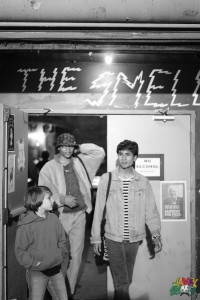 The Smell- All Ages- by Todd Anderson

The Smell, a non-profit, volunteer-driven, all-ages back alley venue is a diamond in downtown’s gentrified rough. In the wake of some electric rainfall, it played host to a bill of heavy rock psychsters whose blown out amplifiers literally have my ears still ringing.

The rare rainfall we get has the ability to dispel the sun’s enchantment, it reveals the hololand that L.A. actually is—reeling in that weird interzone between paradise and dystopia. Or, more simply, the rare rainfall we get makes us feel like Roy Batty at the end of Blade Runner—The moments in our lives are just teeears in the raaain, man! (And yes, only in L.A. can Deckard’s dingy, smoke-filled apartment actually be a Frank Lloyd Wright work of Mayan-inspired art that you can never own, or even rent).

No better way to quell (or magnify?) such fleeting existential funks than by seeing Zig Zags and The Birth Defects shake the walls of this defunct coffee shop, or fitness chain, or whatever stupid shit our crypto-fascist social engineers fancy as bankable retail prospects (the legal world calls ‘em “developers”).

The opening acts were on fucking point. I love when that happens. If you’ve never heard of Rearranged Face or MIND MELD, do yourself the favor of buying a cassette or vinyl, but really just see them live.

Rearranged Face is hard to miss (despite their curious social media absence): quadrangle-style noise punk absurdity with scratchy, interlaced VHS images projected onto a big screen behind them. The singer’s a Karen O type with a Y chromosome, part spaz, part technician. He sings in front of a wired altar of keys, mixers, pedals, and cassette players, sometimes coming out to wail his sermon to the crowd. Mind Meld at The Smell by Todd Anderson

MIND MELD came on with their long, blonde surfer hair and I’m thinking they’re going to be like any other dime-a-dozen, reverb-wet psych act at SXSW, right? Turns out, the singer/guitarist’s bottleneck shredding is nothing to underestimate. With songs like “You’re Not Free” it’s obvious this isn’t just another pop trio crying about an old lover; that’s not to say you can’t dance to it. In fact, at this point, the dark confined space was decently packed with bobbing, laughing teenagers. It’s too bad the vocals were drowned out (a sound problem that would persist for the rest of the night).

In between sets, us older folk (aka Danny and I) went into the alleyway to indulge in smoke and swigs of pocket booze, where singer Jason Finazzo stopped to have a friendly chat in his poncho and smiley whiskey beard. Think big teddy bear joins gringo biker gang. Kim House was spotted on our way back inside, where The Birth Defects plugged in and sparked the crowd into swirling mosh. I hadn’t seen them play The Birth Defects at The Smell

since their debut LP release party with Fuzz at the Troubadour last summer, when the likes of Petey Dammit were in the band. The Defects have since revised their visage, still transforming their sound (we’re very excited about the upcoming album). The pale, shirtless bass player that Finazzo refers to as Phil the Viking, swung his ax around like a monomaniacal lumberjack, probably cut from the same cloth as Vidar—the Norse god of vengeance. It’s a shame Finazzo’s howling vocals were swallowed up in the distorted chaos, but it didn’t take away from their effect on the audience, headbanging drive kept us all hungry for more even as the set ended.

By the time Zig Zags took the floor (there is no stage), everyone was a sweaty, frenzied mess. Dual vocal proclamations between guitarist and bassist rose above the punk driving, and made themselves heard.  They have an odd but incredible mix that are equal parts KISS and canadian prog thrashers, NOMEANSNO. There was no incessant phone glow in the crowd. In fact, if your phone was out, there was a good chance of it getting thrashed. Mostly girls—not even old enough to vote—were the main instigators in the slam pit, acting out of some unspoken, ecstatic awareness that taking on a violent patriarchy involves embracing the violence itself. Let chaos rip long enough and it becomes magic. 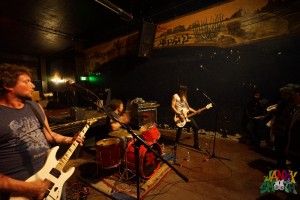 Zig Zags at The Smell

Zig Zags’ set was an endurance run (I lost track of time after about an hour). I stayed on the brim of the pit but its gravity was the equivalent of doing Kirtan chanting for 6 hours straight (I’ve done it). Time became compressed into one big awesome piston stroke and all our toxins and inner demons poured out of us like some punk rock sweat lodge. I wondered if The Smell saw this kind of show on the daily, and if it did, it would satisfy my inkling that it was the closest thing to a post-empire CBGBs that L.A. is going to get. A standout song was “You’ll Never Take Us Alive.” Yeah, I thought, as the clouds cleared up in the dark midnight skies outside (tomorrow’s promise of much much more sun). Fuck yeah.