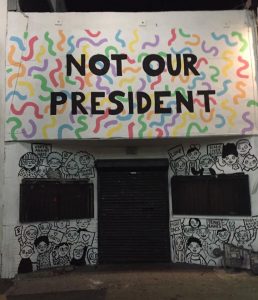 The Smell- Not Our President

There isn’t much in the way of diverse options for those looking to loiter in Downtown L.A. alleyways. Well, unless you’re a crack head or an all ages indie music enthusiast, of course.  You best believe that the alley that nestles the entrance of The Smell is the cleanest alley east of Figueroa, though.  Amidst a turbulent and emotional month for essentially everyone and a year of uncertainty since the demolition notice first darkened it’s doorway, it was the front of the building’s street-facing facade that gave street lurkers and fledgling music journalists the eye candy they were looking for- a fresh coat of paint that was used to paint a mural depicting happy cartoon protesters supporting a litany of issues that weigh heavy on the minds of those that frequent and volunteer at The Smell. Above the door in bold black letters is the rallying cry  “NOT OUR PRESIDENT”.   I believe it’s the first time I’ve seen The Smell with any distinguishable markings on the street side of the building.  A lot of change in the air.

Related Article : The Rally To Save The Smell And The Horrid History Of DIY Venues In L.A. 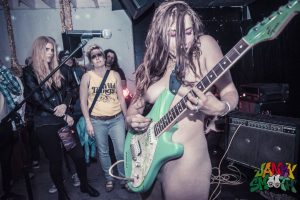 This particular block in the heart of DTLA is particularly buzzing with life on this Thursday night. The all-ages crowd is anxiously awaiting a massive performance by Sloppy Jane that happened to fall on vocalist/instrumentalist Haley Dahl’s birthday. Band merch for Sloppy Jane includes shirts scrawled with the message “Haley Dahl is a mean mean whore.” Dahl seems to revel in the message and take it more as a complement. You may have heard us mention this band before as one of our Bands and Artists to Watch in 2017  or after their explosive performance at Janky Fest last year or our premiere for the weird ass video for “Aunt Rosie’s Garden”  Or maybe, like most people in the world, you’ve never heard of Janky fuckin’ Smooth at all!  In which case…

Sloppy Jane as a collective is an impressive lineup; every member is a multi-instrumentalist thundercloud of raw, unadulterated punk energy that is captivating to both the eyes and the ears. There’s just simply an absence of discomfort or uneasiness and certainly no hesitation to take the repertoire to the next level. Haley Dahl, Sara Cath, Kathleen Adams and Vyvyan make the performance space their own. Vyvyan and Kathleen are additionally members of the group Loko Ono and in cooperation with Sloppy Jane, they recorded an immaculate cover of the late Prince’s song “Darling Nikki” released last April that can be downloaded on the group’s bandcamp page. Dahl’s stage presence is just as much performance art as it is a presentation of musical composition. A small television set atop a crate plays old children’s cartoons and a life-sized stuffed bear lays haphazardly in the foreground of the drumset. As she takes the stage, Dahl strips off her overalls until she’s clad only in two different length sock and a birthday suit. She unabashedly clamors onto the stage and immediately vomits electric blue paint on herself and the first row of spectators, delighting the screaming attendees. “Where did you go, what did you see?” the lyrics beg the audience. Throughout the set, they exchange instruments regularly and contribute to the vocals while Haley engages in all manner of antics. Half of the performance is done from the floor and Haley has no qualms about rolling around on the floor of the pit amidst the moshers, draping her nude, languid body across the stage while intoning both new and old material to the delight of their fans. 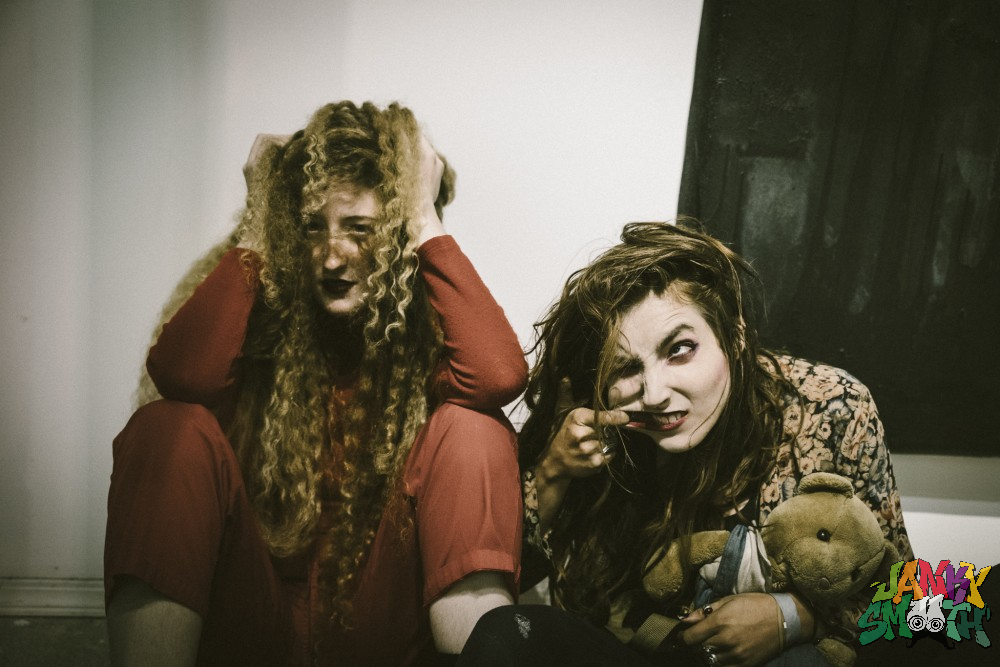 The group just completed their new full-length record with help from Joel Jerome and production is underway which will be the first major release for the band since July of 2015 when their album Sure-Tuff was released on Lolipop Records. When asked about new material in general, Haley simply dropped her head onto the merch table with a resounding THUD and began to wail voraciously. “You can write down that I did that”, she said “because that’s how I feel.” Working with Joel Jerome is something the group seemed enthused about. Joel, who was given the moniker of “Behind-the-scenes Indie King” by L.A. Weekly and has recorded for bands like Cherry Glazzer and Mystic Braves and now runs his own label aptly named Psychedelic Thriftstore Recordings. In the upcoming year, Sloppy Jane will have a lot to look forward to with the completion and release of the full-length album and continuing to perform live. Next up for Sloppy Jane is The Bootleg, where they will be playing their next show on February 15th.

A reminder to help SAVE THE SMELL

Since 1998 this building has served as a staple in the Los Angeles music scene and efforts to save this historic venue from demolition at the hands of developers have given way to the unfortunate realization that The Smell is in a tight spot. Efforts to raise over $1 million to assist the venue in its relocation efforts have been underway for some time now with many local artists playing benefit shows and fundraising events . For 19 years, bands like So Many Wizards, Audacity and No Age have played in this space and volunteers curate this non-profit, alcohol-free venue for music fans of all ages. Every show is $5 and most people are happy to contribute seeing as most people recognize that in order for these types of places to operate, there has to be a heavy backbone of community support. With spaces like this rapidly disappearing as rent prices soar and the importance of art being devalued, this is either a wake-up call or an omen for what may happen within this scene and with independent music as a whole. However, the underground music scene has always been a resilient one and with optimism and pro-activity from those involved in the community, the scene will thrive even in the face of adversity. 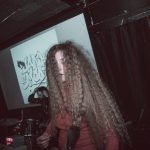 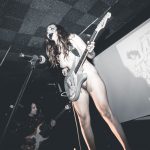 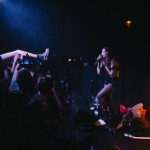 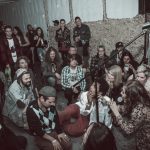