Metz, Retox and Obliterations on the same bill at The Echo is a hardcore lovers dream. It’s a testament to Metz and the confidence they have in their material and live show. Both of the opening bands are capable of headlining their own gigs and potentially shaming headliners into reevaluating their life’s purpose. But the latest Sub Pop Records anti heroes delivered a high energy set which sent fans into an unstoppable frenzy. Their sophomore album, Metz II is a progressive step that delivers more chaos and aggression along with a BIT more commercial appeal- a difficult task, to say the least. 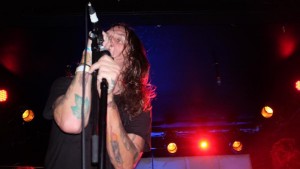 Obliterations at The Echo

It’s been almost a year since I’ve seen Obliterations. Poison Everything was one of my favorite albums of 2014. They’ve been touring almost non stop since that time but there was no fatigue apparent. Frontman, Sam James Velde has the look of madness and ill intent in his eyes when performing. It appeared he took the low energy, opening act audience as a challenge. He continuously leaned over the threshold of the stage, hovering over people and screaming in their face, particularly the audience members who weren’t completely engaged. By the time a pit finally exploded on the floor of the Echo, Velde was right in the middle of it, laying flat on his back at one point, shouting at the sky. “Mind ain’t Right”, at all. 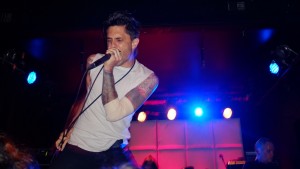 Retox at The Echo

Justin Pearson is one of the most prolific men in hardcore music. Between his Three One G label, front manning for Retox and the recent resurgence of Head Wound City, it seems like he is always on tour across the country. With a little blow back from my review of the Head Wound City show, calling him both “pretty” and “metal” (I still submit that noise and grindcore are direct descendents of metal), I was able to meet Pearson for the first time last night and we had a laugh about that. After his set, he smirked and said, “Not bad for a pretty boy, huh?”. Everytime I see Retox they get better and better. Brian Evans is one of the most impressive drummers I have seen in a long time. In fact, I almost want to name this review “Attack of the motherfuckin drummers” because every man beating on the skins last night had me scratching my head, wondering how the fuck they do that. Pearson, much like Velde, hovers himself over the audience in an entangled orgy of musical aggression- Mic cable draped around his neck like a dead animal. Finally, our benefactors for the evening took the stage. The last time I saw Metz was before Metz II was released at the last Moon Block Party in Pomona. While I wouldn’t put Metz in the same genre as either Retox or Obliterations, they are completely adept in the art of violent rhythms, shrieking guitars and epic riffery. I was prepared for them to play a majority of songs off Metz II but it wasn’t until the 4th song in that they played “Spit You Out”. They opened with “Knife in the Water” and instantly, frontman and guitarist, Alex Edkins was a mass of sweat and spasms. Drummer, Hayden Menzies is a hard hitting, rhythmic savant as Chris Slorach is more than comfortable with him in that pocket. The Echo was packed for their set and fans were losing their fucking minds. Photographers were scrunched into a tiny corner next to the stage because the front of it was a cauldron of angst and physical violence.  By the end of the show, Edkins’ glasses were fogged up like the back seat of a car that just hosted an orgy. 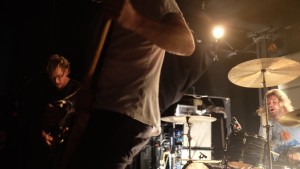 It’s easy to listen to Metz II and state that they are highly reminiscent of early Nirvana but ONLY early Nirvana, particularly off the Bleached album and ONLY songs off of Metz II fit in that category. That is, of course, just my convoluted opinion. Much like Nirvana, people struggled to label and categorize them, which  is the mark of a highly original band. These FYF side-shows are going to spoil me but seeing Metz twice in one week will NOT be anti climatic. Metz are one of the most exciting, newer bands on the scene right now. The power and authenticity of their live show is potent and inspiring and this power trio are still only at the start of their mission to melt faces.