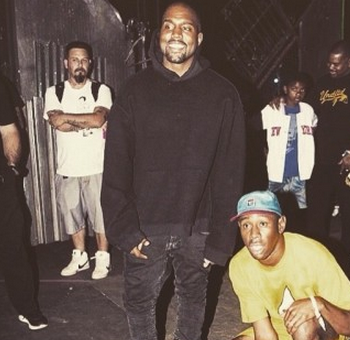 As you may have heard, Frank Ocean is no longer playing FYF. None other than the gawd, Yeezus, has filled the spot. My fervor for the church of Yeezus is well documented. Yet, I feel cheated by this turn of events.

My malevolence is as much a shock to me as to many of my friends, “But you love Kanye,” they say, “Remember when you fell through the roof because you were jumping, singing “Touch The Sky” at that party?” They ask. “OMG, when Kanye came out with the Weeknd at Coachella? You were crying!” They remind.

Do I love and have I done those things? Yes. Very much yes. But it doesn’t change how I feel.

Am I over Kanye West?

I don’t think so. I think it might just have to do with redundancy. A word I never thought would survive on a page discussing Kanye. (The fact that I wrote it and lightening hasn’t turned me to dust reminds me of the first time I texted a friend on the Sabbath)

But, yea, it feels played out.

“Kanye West: Have Mic, Will Headline.”

“Need to add a price surge to your event? Hire Kanye West!”

“It’s hard knowing what people will like, satisfy everyone this summer; hire Kanye.”

Is this what Kanye has become? Who thought he would ever be a fill-in? When did he become the Coca Cola of pop culture? 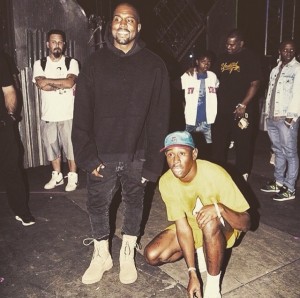 Getting him to cover for Frank Ocean is the safest move FYF could have made. For a festival that, up until a week ago, had one of the most uniquely curated lineups of the summer, it feels like a further descent into Urban Coachella. To say nothing of the fact now, instead of having an ego-cleanser like Frank to balance out Morrissey, we just have a big-head contest for two days.

Maybe I’m being unfair. I’ve been fortunate to catch Kanye 4 times since the Yeezus tour. Not everyone has. If you still haven’t seen Kanye than, fuck yea. It’ll be great.

But honestly, none of his appearances since his mountain climbing, Jesus meeting masterpiece has come close to refreshing the page or resparking the energy. I can’t imagine he has anything in store to make FYF more memorable than this: 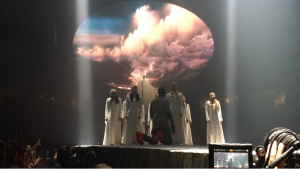 But logistics are tough. As a colleague of mine mentioned, “On 24hr notice there are, like, 5 people in the world that could have filled in for Frank without causing chaos. Besides,” He continued, “It’s better than Drake.”

Than again, there are a slew of great artists in LA that might have made it. Artists with some new stuff out. I mean, what does Kanye really have to play? “All Day” is incredible. Seeing it live is goosebump inducing. But that’s sort of it. Though he has hinted at dropping Swish/So Help Me God/Whatever He’s Calling It This Week for almost 2 years now, there is still nothing. Maybe it’s Kanye’s Detox. We all know how that turned out.

Hey… Speaking of Detox, didn’t Dre, a long time LA staple, just release an enormous soundtrack? He has a pretty storied back catalogue too. Hm…

Y’know, I think Compton had this really great up-n-comer on it. Really killed it. Kendrick Lamar? Did I get that right? He lives in LA too, no? Wonder how the people would have reacted to that switch.

But for all monotony of festival ‘curation’ Kanye will put on a good show; even if it is boilerplate and recycled.

And who knows, maybe he will really do something special. Maybe he’ll drop his whole album! Or new songs! There is a new Kanye-produced Weeknd track that has begun to surface, “Tell All Your Friends.” It sounds like the olde jazz/soul Kanye production that Yeezy has been distanced from lately. It’s also a phenomenal Weeknd track. Say, I wonder how Abel would have been at FYF… The world will never know.