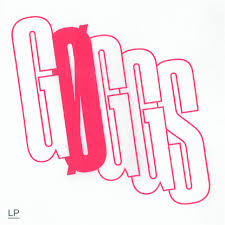 Ty Segall’s new project GØGGS doesn’t feel like a side project. GOGGS is being touted as “Ty’s new Punk Album” by many publicists and suits and probably just relayed simply that way by frontman, Chris Shaw in a non ambiguous and lyrical manner.  And it’s punk.  Not like Bad Brains or Black Flag punk but it’s punk rock like Fugazi and Parquet Courts; It dares you to put a label on what they do.   When you attach the punk moniker to your music, authenticity is the single biggest pre requisite and that comes from the purity of your intentions with your music.  GOGGS innovate in the increasingly nebulous punk rock genre by experimenting with and finding a unique and original guitar and production tone and organizing the bands thoughts into an appropriately confrontational demeanor.

Charles Moothart went vintage effect pedal shopping and created something special.  Sharp guitar tones with jagged, distorted edges and high mid range.  It has an “early catalog Ty Segall” tonal vibe ala Melted and Twins but it’s more abrasive and percussive.  It is the most prominent feature on this album and I say that in a good way.  The bulbous bottom end bass guitar by committee, (Segall, Moothart, Corey Hanson) contrasts the washed out, treble rich drum cymbals and hi hat; which is also becoming a Ty Segall production trademark but the bass tone gives the tracks the proper amount of sludge. I’ll name it scratch and sludge.  It bestows upon the album the kind of charm and the street cred of a scuffed up pair of Chuck Taylor’s.  Chris Shaw with his deep register and taunting cadence dares you to talk shit and get in his face. 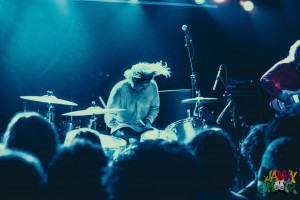 GOGGS have a song called GOGGS on their debut album, GOGGS.  There’s nothing I respect more than a band being unapologetically stoked on themselves and what they’re doing enough to create a theme song.   It’s my favorite track on the album.  It’s got that detuned harmony between both 5 and 6 string instruments that I’m such a fan of, hence my Fugazi and PQ reference.  Track 6, “Assassinate The Doctor” has a similar feel. There are tracks off the GOGGS album that take a more “traditional” punk approach like “Smoke the Wurm” and  “Needle Trade off” that stride and kick it into either double time or half time and those are just as satisfying.  You can tell right in that opening track, “Falling In” that this record wouldn’t be in a traditional 4/4 time signature the entire time. Song 1 felt more like Sabbath sonics with a Kelvin Morris era Discharge vocal. We are thrown completely for a loop on the second to last song, “Final Notice” which sounds like some exceptional, future dystopian nightmare and features back up vocals by VIAL’s Denée Petracek (although it’s hard to tell if one person or two people or a closet full of aliens are singing on this song).  Experimental tracks like Final Notice often fall flat but it never seems to become tedious or dragged out and is one of my favorite tracks on the record.  The album is punctuated with what I take as a metaphor for a Ty Segall supergroup, “Glendale Junkyard”; the last song on GOGGS debut self titled album being released July 1st by In The Red Records.  Can’t wait to see how and with whom it all works live when I see GOGGS for the first time at In The Red Records 25th Anniversary party July 14th, 15th and 16th at the Echo and Plex. 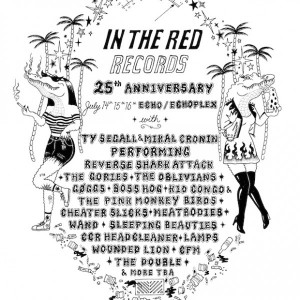 The impressive thing about Ty Segall isn’t the amount of music he’s put out.  I have years of digital, 2″ tape and ADAT audio of absolute crap I’ve recorded.  What’s impressive about Ty is the amount of GOOD music he’s put out. Many glimpses of genius and absolutely nothing he’s released has been a throw away.  ZERO. And as a producer he’s engineered some of my favorite, new bands of this year and last like FEELS and The Birth Defects.  What muse doth bestow it’s glory on such an unassuming fellow?  Because make no mistake. The quality control standard and sheer volume of Ty Segall’s art has 100% to do with an over abundance of inspiration… and maybe adderall.

I am jealous of Ty Segall.  Not because he’s a rockstar on his own terms and an incredible guitarist, drummer and song writer. Very few people get to choose what they want to do over what they should do in their careers but Ty Segall has enough momentum to work on ANYTHING that inspires him in the moment.

You can preorder GOGGS Here