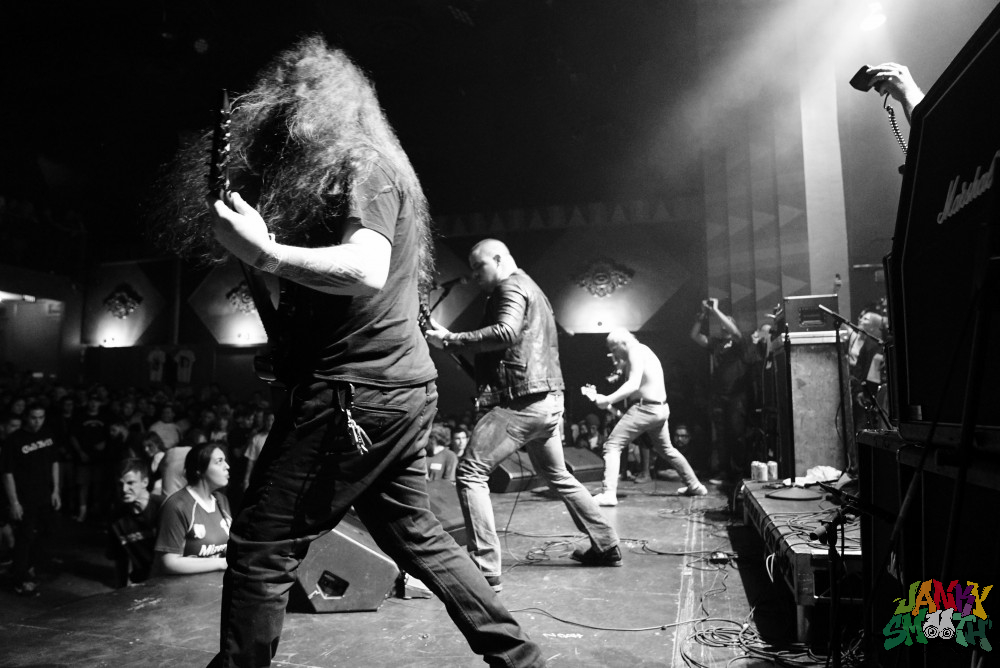 I am not a hardcore kid. I do love plenty of hardcore bands but I’m a metal kid that found his way to punk. So by virtue of that, what I really seek out in music is extremes and as soon as I discovered Sound and Fury, I could tell it was the most extreme 2 day fest Los Angeles offers. 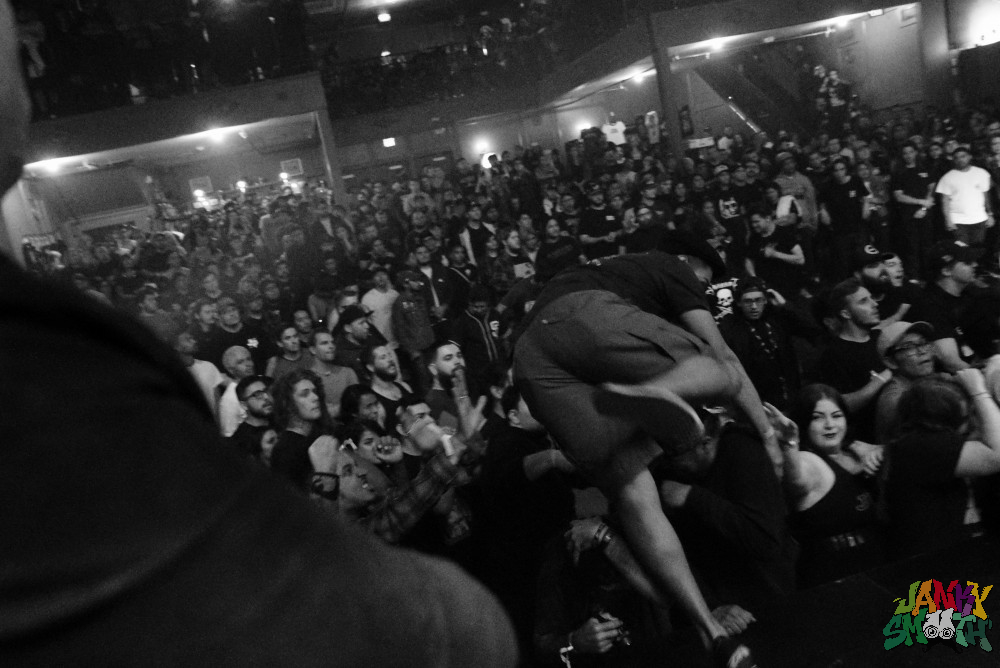 Sound and Fury is a home for the hardcore kids, the truest of which as Nails front man Todd Jones pointed out, come from broken homes. The west coast and east coast have constantly been trading influences since the dawning of punk and as the east coast created hardcore and nurtured it with festivals like Philadelphia’s This is Hardcore, Sound and Fury Fest became the West Coast’s rebuttal. Sound and Fury’s history was all about showcasing rising bands and staying in low key venues around Ventura County for a DIY, homely feel that would foster brutal moments of pure letting go. Now having moved to the Regent Theater as its home base, the festival is bigger than ever with a lineup that crossed every flavor of hardcore punk.

I bought my ticket the moment I saw Ceremony and Nails on the same bill. I had seen both bands last year and was deeply impressed. Ceremony toured with Negative Approach for their L-shaped Man album and did a set that seamlessly ping ponged between hardcore and post punk. Their 2010 hardcore masterpiece Rohnert Park is essential listening to any young hardcore kid with numerous anthems of suburban angst. Above all other accolades, what Ceremony does best is connect and their audience would kill for them. 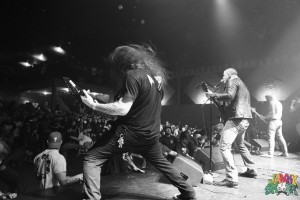 Nails is that band that comes around every 5-10 years that blows you away and makes you wonder “How on Earth could anything be more brutal than this???” I saw them headline at the Echoplex and though they only played about 30 minutes they still completely leveled the place. Their songs are fast, short, and brutal blitzkriegs. After hearing a few songs from their newest album “You Will Never Be One of Us”, coming out Friday, I knew I had to see them again as soon as I could.

These were my motivations in buying a ticket, what happened at the show is my motivation for going every fucking year from now on.

Friday started me off with Downpresser laying that traditional hardcore swagger down thick with dragging breakdowns and guitars. I could see what separates Sound and Fury from other shows instantly. There was a hole in the center of the audience that was biggest space I had ever seen reserved for slamming at an indoor venue. There was slam dancing, punches and kicks flying and spinning in every direction, kamikaze kids using their bodies to spear into the audience. Another thing that makes Sound and Fury better than every other festival is that bands use the same set ups, same drum kit and amps, do a very quick sound check and in ten minutes of one band ending the next is ready to go. It’s true to the hardcore spirit and makes the festival about the music above all the other bull shit.

Next I saw Brace War who had a more metallic edge to their guitar and heavier feel. Then Angel Du$t took the stage and delivered their frantic assault on the audience that got the kids up and onto the stage to surf. Guns Up! tapped right into the packed crowd’s vein and hit the right chords with every song, I was head bobbing to that beautiful hardcore chug while violence ensued all around me.

Night one was a sonic lesson in hardcore. Most of these bands I had never heard of before but many of these kids had been waiting to see some of them for years. The night went on longer than I did with an after show at The Smell. That’s another incredible thing about Sound and Fury, like SXSW, the festival is dispersed throughout the city with multiple after shows on each night and an opener at Union Nightclub the night before.

Day 1 had served me a hearty dose of violence, sweat, and adrenaline but tomorrow I was going to see Full of Hell, Ceremony, Nails, American Nightmare then an after show with black metal power houses Taake for their first ever Los Angeles performance. 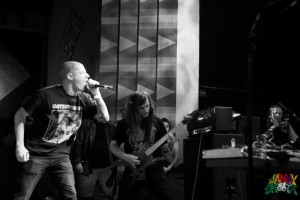 Full of Hell at Sound and Fury by Todd Anderson

I arrived for Day 2 as Forced Order was playing and the audience got down, HARD. Tony Molina was next and they brought a more alt rock edge with their brand of hardcore. Full of Hell then brought their brand of hardcore with elements of grind and death metal for a sonic trip to hell that takes you further down every time they distort their guitars and feed us into a loop of nauseating and guttural noise. The drummer brought the blast beats, the guitarists brought the chug, and the singer growled his vocal chords bloody as their dedicated fans went crazy, many of which were giving overt provocations to violence to the crowd as if to say “This sound’s so brutal that if you’re brave enough to listen, you best be strong enough to take the hits.”

And then Ceremony started setting up and everyone came out of the woodwork to pack onto floor. I was scarfing down a pizza as I waited for them to begin and once I finished they opened their set with a slow, piano driven lullaby where they sang “You have to get through this… get through it all… get through it all.” Then out of nowhere the opening chords to “Kersed” began and the entire place erupted into chaos. Everyone was running every direction and nowhere was safe in this sea of violence. I thought this kind of shit only happened at Slayer shows but no, Ceremony was able to bring that out in us while still maintaining their brand of “sensitivity”. The entire venue knew every song by heart and when they played “I Want to Put This to an End”, a grip of kids got on stage and piled on top of Ross Farrar to sing “I GOT PROBLEMS, I’M A FUCKED UP KID!” At one point the band’s guitarist Anthony Anzaldo called out the audience for misogyny, he said “hardcore is not a boy’s club”. Ceremony proved that they were the Sound and Fury fan favorite, no one else could get us to let loose as hard. Now, the band coined as the angriest band in hardcore, whose music inspires legitimate fear: Nails… fuck yeah. Even before they went on I spoke to fans who told me they were too afraid to go in the pit. Once they set up in front of their Hatred Ad Infinitum backdrop, they began their set and delivered the goods. Playing songs off their new album like “Savage Intolerance” and the hits like “Wide Open Wound”, “God’s Cold Hands”, and closing with “Unsilent Death”. Nails is hardcore punk but with enough grind and thrash that metal and hardcore might fight over them. Nails is definitely hardcore, they’re just so savage that they set a bar for brutality that few in the genre can touch.

Todd Jones gave a few shout outs to bands he liked such as Cromags, particularly their Before the Quarrel album as well as Los Angeles hardcore band Terror. At one point when the pit was looking weak, Jones called it embarrassing, saying that he gets a lot of flak from east coast hardcore kids that swear the west coast doesn’t know how to slam or mosh and I hate to say it but I think they’re right. Not just in hardcore though, I’ve been seeing this awhile now and decided that Los Angeles audiences just don’t bring the party that often. We’re far too self conscious to let loose. For fucks sake, I saw Iggy Pop do a Stooges set on Hollywood blvd and me and like five other people were the only ones dancing.

American Nightmare closed the night, I didn’t know much about them but after listening to an album or two I sorta shrugged them off for being too emo lyrically then seeing them live, they were actually the tightest and most pro act of the night. They were rock stars. Wesley Eisold, the man behind Cold Cave, strutted and sashayed at one moment then ripped it up with pure hardcore energy in the next. Their sound captures that yearning and passion inside your soul like good hardcore should. 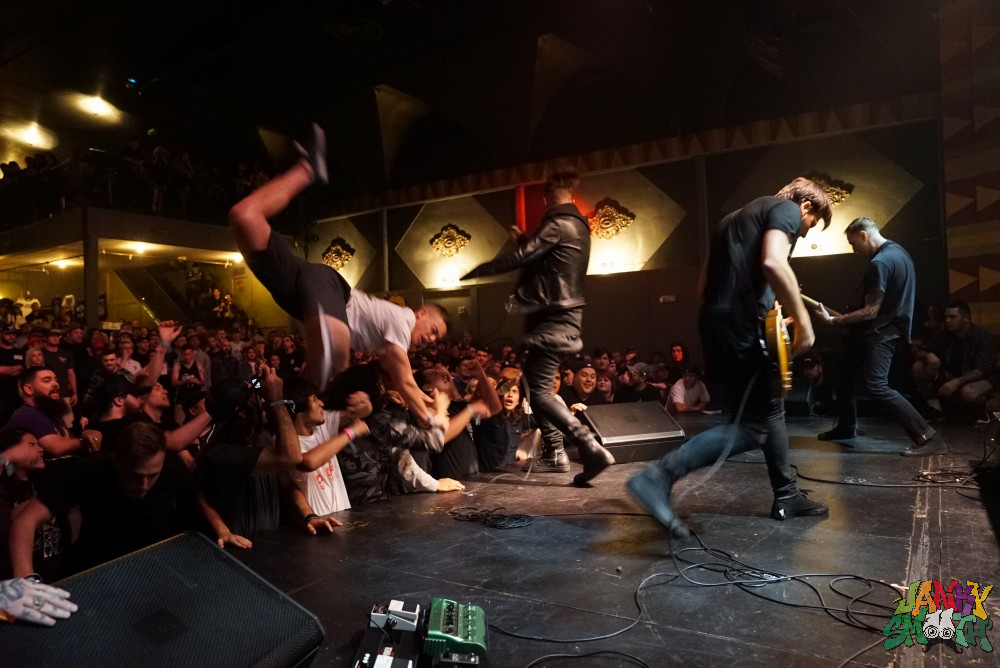 American Nightmare at Sound and Fury

And so Sound and Fury proper was over and off us gnar-dogs went to either of the after shows at the Smell for Freedom or at the Regent for Taake. Seeing Taake was worth swallowing the bitter pill that I had to brutalize my body and mind more this evening. Taake is the creation of Norwegian madman, Hoest. He plays ever instrument to create this frozen, black blooded metal assault on the senses. The first thing I did was buy their T shirt which read TNBM on the back.

Wolvhammer opened the night with their black, death inspired American metal. Their synergy as a band was the epitome of evil and their singer was able to capture his and ours anger and pain through his growling.

Next was Young and in the Way, self described as crust punk meets black metal, these crazy mother fuckers hail from North Carolina and don’t give fuck about anything. They seem pissed off and ready to kill when they hit the stage. I feel like they hate me and I hate them and I love that. Their music is a heavy provocation to nihilism. “Fuck off and Die!” was the singer’s last words before getting off stage with a handle of Jack Daniels.

Smoke machines filled the room with haze and Taake took the stage to conjure pure fucking devastation. Every musician brought all their chops to create this raw, jagged music. Norwegian Black Metal is the rock bottom of the extreme music rabbit hole. The guitars shriek in agony, the drums bleed and cry with every beat, but still Taake keeps distinct hooks in their riffs that feel like you’re a part of Viking or medieval European mythology.

It was now 2:20 and I wanted to take YAITW’s advice and die. My hearing was grossly damaged, I caught ill, and my body was begging for me to surrender. So how else could this musical debasement end? Well, Taake performing a black metal cover of GG Allin’s “Die When You Die” would suffice. WE WENT NUTS and the mosh pit let out its final dying breath.

“My art is a machine gun, my body is the bullets, and the audience is the target.”

Hoest quoted GG and after Sound and Fury 2016 was through, I felt like I was a well shot up target. I can’t fucking wait till next year. My only regret was not seeing Ceremony and Angel Du$t play at Perhspace the next day for a sold out small matinee show, I was fucked up from these two nights but with just a wink of sleep, I would’ve been down to get my ass kicked all over again.