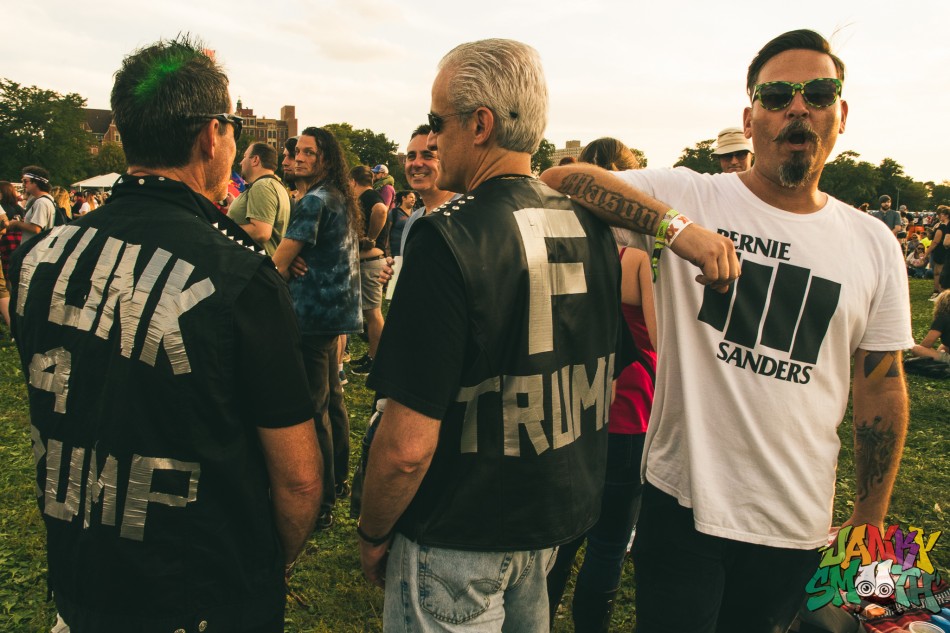 Obama spent the bitter part of 8 years trying to convince us that there weren’t two Americas. Even though he’s a scholar and a student of history, he was optimistic his election was the beginning of the end for what Nixon started- The Southern Strategy. But it’s becoming evident, no matter how much Obama campaigned on the slogan, no one knows better than Hillary and Barack that there indeed are two Americas.

It’s not just that Trump won- It’s how and what he won on.  “Their” obsession with the Gordon Gecko, greed is good archetype and the fact that the “other” America has only ever excused the WASP president for lies and looting and pillaging the earth and making windfall money and grabbing every woman by the pussy- because that office has been filled with a lot of pussy grabbers, until Obama was in it. So without those types of scandals, all there was left to do was discuss birth certificates, brown suited salutes and Michelle’s beautiful exposed arms –Purr

MOST white people in America do not like talking about race- PARTICULARLY  Blackness. We still live in a pretty segregated society even though it’s definitely improved since I was a kid- at least in “My” America.

But Obama was a whole new deal. It was gnarly for the smaller but MUCH more vocal faction of “them”,  the hardcore “Alt Right”- really GNARLY.  Many of “them” believe in a biblical form of breeding, so their rants are probably well embedded into the mind of the burgeoning deplorables- so this ain’t done at all. Because “they” are the other America and they are sick of being shamed and defriended on Facebook for their culture and acknowledging their existence is political suicide. Like when Obama said they “cling to guns and religion” or Hillary called “them” deplorables. Doing so was akin to saying Beetlejuice 3 times and then the ghost of Breitbart appears to execute political exorcisms and all good will for Hillary Clinton’s spirit. That type of rhetoric creates a media firestorm between the two Americas,  much like Romney labeling “us” simply as”the 47% of” takers or his “binder full of women“. He didn’t build that!  Political think tanks built that and that’s how identity politics work and that type of political theater is why we are being pushed further and further apart.

The good ol boys and the subtle, baked into the cake racists that just haven’t spent a lot of time around POC and the general, JewSA crowd couldn’t handle the fear and loathing of all the murder on their television screens and Facebook feeds and the thought of having to talk about blackness all the time. The very  thought of police putting an end to making sure black people stay on their side of the city was terrifying amidst all this justifiable black rage.

And Hillary?  Pppppffffttt. She’s as uppity as it gets!  She almost single handedly WILLED the Bill Clinton presidency and “they” would’ve loved Slick Willy if it weren’t for her. Because only a NeoLib like Bill could’ve gotten away with welfare reform and repealing glass-steagall and even when the “do anything for power” GOP made Lewinsky a thing, he still walked away with sky high approval rates at the end of his two terms.  “My” America didn’t care about Lewinsky. The same way only Bush and Cheney could’ve gotten away with the Patriot Act- by invoking 9/11 and American Exceptionalism to their base.

Billy was as smooth a politicians as ever was. But even he was nothing compared to Obama who BECAME the master- or was it the house negro?  Either way, he had to act as both master and servant. He crushed in his last two years after navigating the “Alt Right” IN the fucking government. But he fucked up the end game, big time.  Now his entire legacy is on the cutting room floor of American revisionist history. 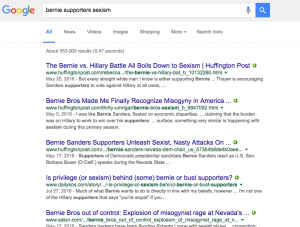 There was an avalanche of populism yet he/”we” still chose Hillary- almost everyone in “my” party did, even with evidence that there was a MAJOR conspiracy against Bernie Sanders that started with a media black out that lasted right up until the Iowa caucases and primaries that were wrought with the same voter disenfranchisement the left complains about from the GOP.  The DNC tried convinced it’s base that Bernie and his supporters were no different than the sexism that was happening on the right- even though it was mostly just folks who gave no fucks about the CNN soap opera and weren’t old enough to remember the vilification of Clinton.  But still, the DNC set the stage for Clinton vs Trump, thinking that the demographics of the identity politics game would win out in the end.  In retrospect this was a big mistake that people who have been wrapped up in this CNN reality show in our government just refused to admit. 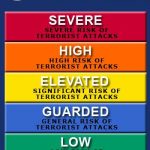 Over the past 6 months in the campaigns for the general election, the TV war of the two Americas played out as the millennials, the biggest voting block in the country, with no attachment of living through the melodrama of “the other America vs the Clinton’s”,only had her record to rely on. A Democrat with an actual voting record who governed in the auspicious times of the post 9/11, growing corporate police state and in a time of color coded terror alerts every fucking week. That and decades of Republican smear campaigns and a stint as Secretary of State (No former Secretary of State has been elected president in 160 years), one of the filthiest cabinet positions in a growing imperialist government (imagine a President Kissinger). Clinton’s record ran against clips and sound bites of appearances on the Howard Stern show and Entertainment Tonight and still, as of yet unreleased tax returns- the only thing that would’ve been comparable to Clinton’s political record for a man who ran on his business acumen. But the base on the Right is far less demanding and apparently LESS fractured than the base on the Left as ALL the pundits predicted that Donald Trump meant the end of the Republican Party… Oops.

Aside from Millennials and analytical thinkers  who seemed impervious to the political soap opera- almost anyone who feels a part of the America I live in wanted to see the woman the other America hated since she had the audacity to have her own office in the west wing have an office in the west wing, once again- only this time as the main shot caller. More than fahking Trump- at least In MY America!

related: Millennials- Is The World Right About You?

But the mob wanted populism and “we” wanted closure. So the soap opera reality show season finale ends with Bill off grabbing pussies with Donnie and Vlad at Epsteins Island and America getting a neon trump sign hanging from it- Brutal.

Now, Trump goes into office being the most powerful president since 1928?  At least that’s what a REAL woman like Ann Coulter tweeted. And our constant hope and internet shaming that we were about to put the last nail in the coffin of the other America MIGHT’VE been a bit premature, as “regular” folks around the world reject globalization and open borders in a post 9/11 war on terror world which mixes the fear of attacks with an open society- Mixed messages.

The “Them” of the world have been convinced that the Boris Johnsons and Donald Trumps care about the little guy and will swim up stream against the unstoppable current of money. The 24 hour news cycle sweeps us away down the river of campaign financiers and the Brits have excused Farage for promising that EU money the UK saved from their Brexit to the National Health Service.  We have still yet to see what Donald Trump will back peddle on, as the only thing that can TRULY fight the corporate licensing of our planet slowly dies- Unity

Now…I can’t stop thinking about how the DNC/Clinton wouldn’t allow Nina Turner to speak at the convention after counting their chickens and being nervous about a primary challenge in a run for a second term that will never come. After the continued demonization of third party candidates, how do we make HER the populist in the DNC after not allowing her to have her own Barack Obama, 2004 DNC convention moment?  This might’ve been the biggest mistake the DNC made in an election that overflowed with DNC missteps.

related: Memoirs of a Bernie Bro 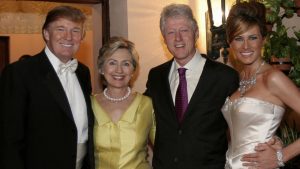 MY America is different than the one that elected Trump but I am NO political partisan.  I was a huge Bernie Sanders supporter and in my opinion, the issues Trump adopted from Bernie’s platform like campaign finance and free trade are paramount in restoring the middle class.  With Donald Trump, it’s tough to tell what was pandering and what, if anything, he intends to follow through on with a Republican congress and Republican senate.  Hell, I’m only just now starting accept that the entire election wasn’t some type of conspiracy to get Clinton elected, as my mind often thinks to MK Ultra more than it does about the systematic abuse of Hillary Clinton (what if Trump was the one that our board of directors wanted to fill those seats on the Supreme Court?.  Sorry)  Maybe the bullying and media bullhorn will be effective in moving these uncompromising trickle down idealists but only time will tell.  But without an olive branch from Trump to MY America, I fear the worst in his promises to restore law and order and “strengthen” libel law but we must move forward together, one way or another.  Who knows, now that his ego has been validated and stroked by America’s decision, maybe he’ll transform back into the New York Democratic Insider he was before he started stoking the fires of a Kenyan birth but I hold out little hope that he isn’t just there to enrich himself and his friends- The modern day legacy of the oval office.

My disdain for the current state of American politics and politicians aside, I never once considered a Trump administration as a real possibillity.  I always made it publicly known that I preferred Clinton over Trump but that I considered the election a formality for Hillary in the dynastic legacy of that office. So in a social media atmposphere in which everyone is looking to blame but no one is willing to look in the mirror, I’d like to tell MY America that I’m sorry and that I forgive you too, brothers and sisters.