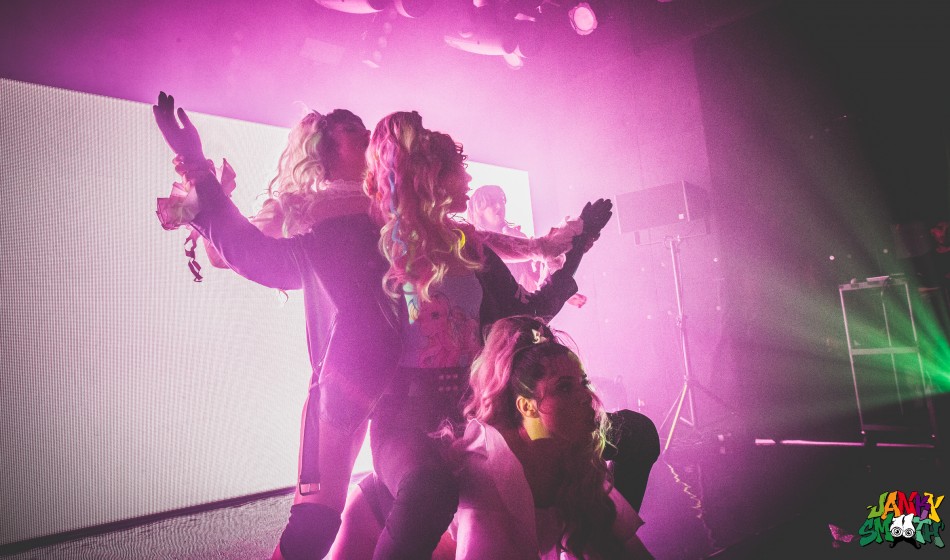 On October 30th, I had the pleasure of seeing SOPHIE make their Los Angeles debut. After rescheduling from playing a smaller venue, the concert was upgraded to the Teragram Ballroom in Los Angeles. Hosted by Red Bull Music Academy, the concert did not disappoint as it was filled with experimental songs interlaced with political and self-loving messages in the form of electronic dance music. 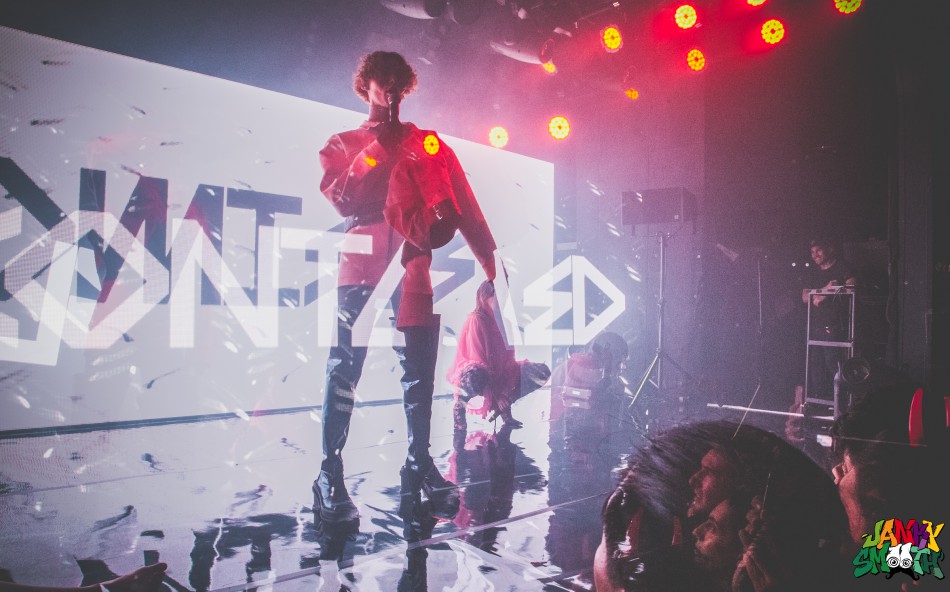 related content: Cloak And Dagger Fest The Heart Of Los Angeles Bled From Dusk Till Dawn 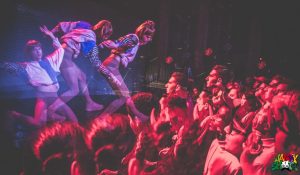 The opening act, Bully Fae, is a solo artist hailing from Los Angeles. Bully Fae’s set was full of energy, including what felt like choreographed dances to the minimalistic trap beats as they spat words angrily into the microphone. The audience was completely captivated by what was being said on stage as Bully Fae shared personal stories about struggling with illness, yet learning to love and take care of themselves through that difficult process, then the audience broke out of the respectful silence to a massive applause. Songs included “Self – Evidence Intervention”, “Fuckery Bitch”, and the empowering “Defy A Thing To Be”. Bully Fae was completely vulnerable on stage with their emotions ranging from soft whispers to loud screams as they did interpretive jazz dances to these very personal songs, which was very entrancing and uplifting to watch and experience. 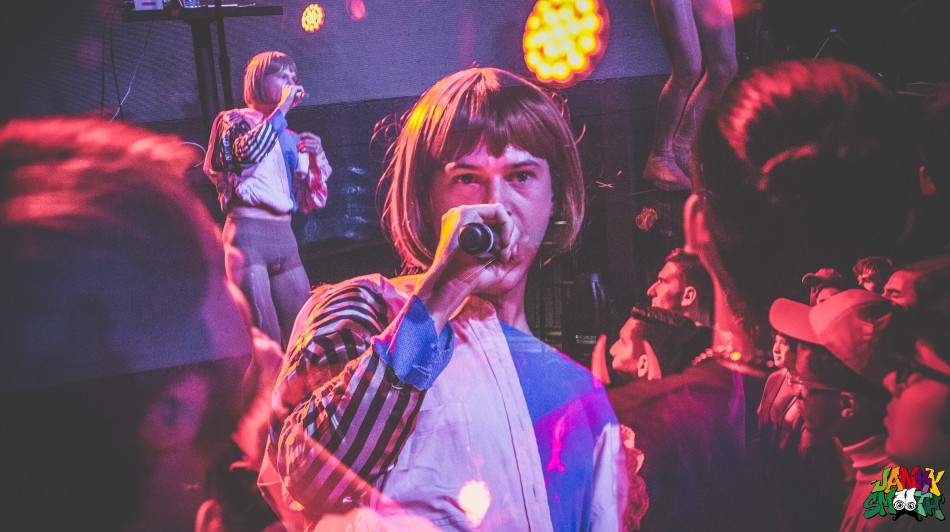 Before the show began, some PC Music stars were lingering throughout the crowd, including QT of the PC Music Youtube smash “Hey QT” who was hanging out with SOPHIE’s mother, both who I had the pleasure of meeting. Also in the crowd was pop star Charli XCX, who collaborated with SOPHIE on many of her songs including the “Vroom Vroom” EP and “Roll With Me” on her latest mixtape “Number 1 Angel”. 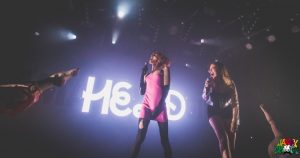 As the show began, the stage was completely blacked out with the sounds of high pitched buzzing. Quick flashes of white light on the giant LED screen backdrop would flare off, with synth sounds coordinating to these blinding flashes of light. I had to shield my eyes as the audience screamed with excitement, building with more and more anticipation as the flashes sped up. QT, standing in front of me, was watching the light show with sunglasses on, so she was obviously prepared! Colorful images of Coke cans, lips, glitter, and glitchy aesthetics stretched across the screen as strobe lights went off. Suddenly, in the darkness, an inflatable raft appeared on stage and SOPHIE engulfed themselves into it, singing and being seemingly swallowed into it until it deflated by the end of the song.

The set mostly filled with all new songs, many of which featured a female singer howling powerful notes. Two female dancers sexually empowered themselves with their dance moves, expressing beauty with sexuality as their bodies intertwined while SOPHIE strutted around the stage, singing into their microphone. One of the first songs in the set featured the lyrics, “my face is the real shop front”, representing plastic surgery within pop culture as images of perfect lips and eyes were displayed on the LED screen. Featuring similar production styles as their earlier work, the new songs were not disappointing and left the audience jumping around, even forming a small mosh pit as the two dancers did a stage dive and crowd surfed over the ecstatic audience. Other new songs featured an upbeat song which they sang “material girls, material boys”, as well as a down tempo slow ballad featuring the female vocalist as she sang emotional lyrics in front of a grey ocean backdrop, making it seem as if the audience was watching them from underwater.

A laser light show shot streams of green and blue lights to the back of the room, making the audience turn around and face the back in order to see the full experience. SOPHIE triggered sounds on their pad which matched up to the lasers, making a fascinating light show which lasted under ten minutes. Following this, a shortened remix of their hit “HARD” bumped through the speakers, causing the audience to shout along with the lyrics, “PVC, I get so hard, platform shoes kick so hard”. SOPHIE ended the set with their latest single, “It’s Okay To Cry”, a tear-jerking ballad of pop mysticism filled with twinkling synths that sounds as if the listener is falling into a night-core dream of floating in space, surrounded by purple and pink clouds. Similar to the visuals of the music video released two weeks prior to the show, the end of the concert featured the same cloudy aesthetic, ending in a thunderstorm of lightning and rain as the music intensified. SOPHIE’s black PVC gloves were dripping with water and they would hold them up to their face, representing the tears they have cried which inspired this heartbreaking down-tempo tune. 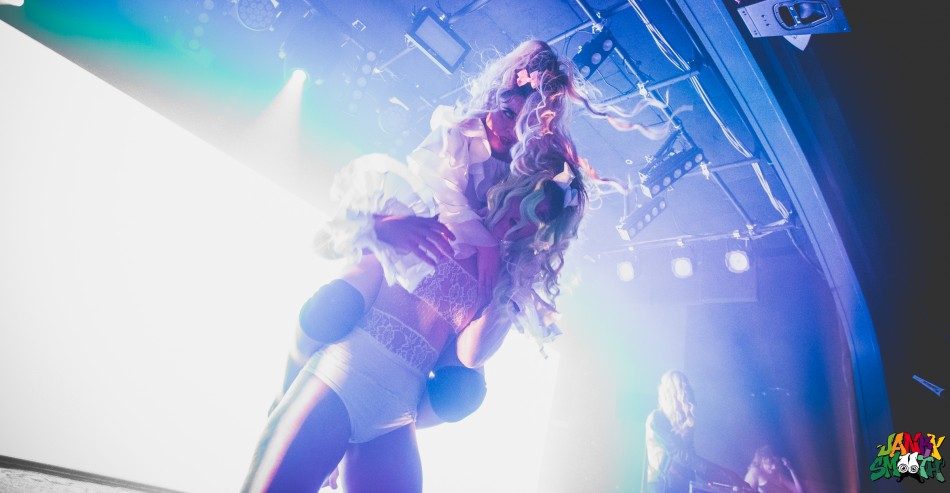