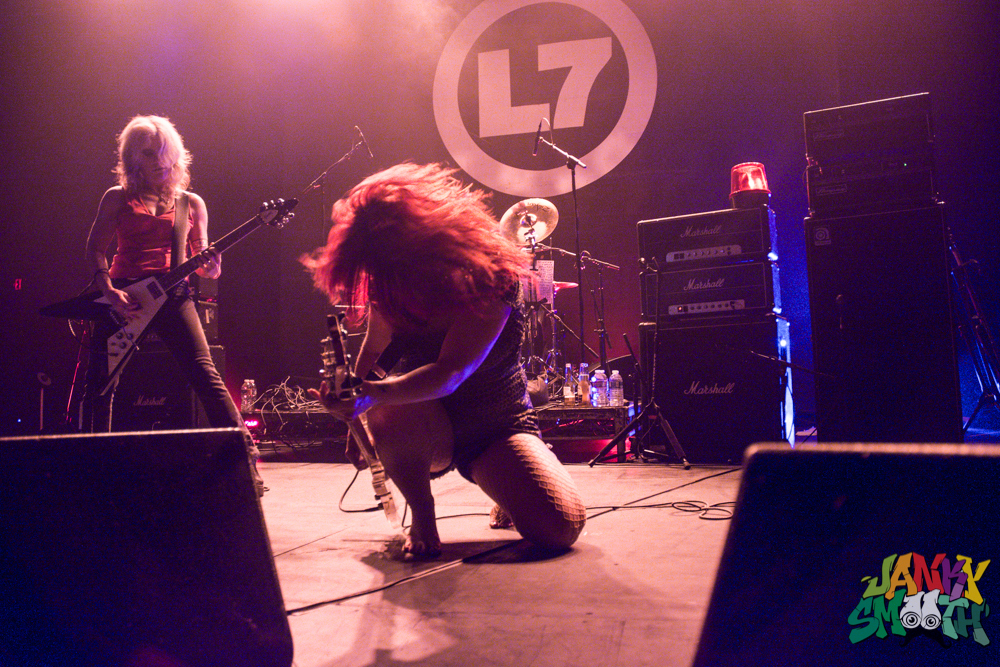 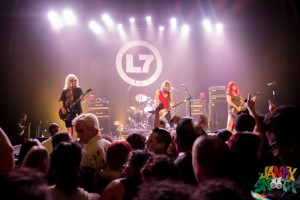 L7 at The Fonda Theatre

I stepped off the plane from Mexico, into an Uber, dropped my suitcases at home and drove directly to The Fonda Theatre in Hollywood to catch night 2 of L7 playing Los Angeles after their first European tour in almost 20 years. I have gone into countless tirades in the past about why I prefer any night but night 1 of multiple date stands by popular bands in Los Angeles but this time, my preference had everything to do with the opening band, Skating Polly. 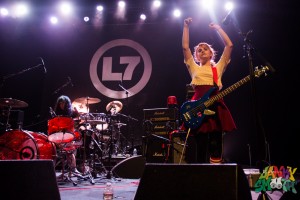 Skating Polly opening for L7 at The Fonda

The first time I saw Skating Polly play a show was in January of this year when they opened for legendary Los Angeles band, The Flesh Eaters. I know the real thing when I see it and since then, I have become mildly obsessed with their 3 records; and I’m not the only one. Every iconic punker that sees them live seems to want to be a part of building their legend, including the producer of their second album called “Lost Wonderfuls”, Exene Cervenka. On Friday night, Skating Polly added L7 to the list of legendary bands that they have helped support in concert and seeing Rodney Bingenheimer sporting a Skating Polly tee that night was less of a surprise than it should’ve been. 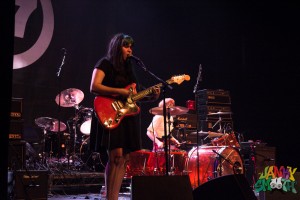 Skating Polly opening for L7 with Peyton singing at The Fonda

When discovering a new band, I always find a mix between being struck by originality and a dash of something familiar. It’s no wonder Riot Grrrl parallels are drawn when discussing Skating Polly and it’s no accident that bands like Babes in Toyland and L7 want the young ladies opening their shows. Even though Kelli Mayo and Peyton Bighorse weren’t even born yet when the classic L7 lineup brokeup 18 years ago, songs like “Ugly” summon the same type of fury and empowerment which insisted on “Girls to the Front”, so many years ago. They call their brand of music, Ugly Pop.  Skating Polly charged through their set that started with a room, sparsely filled with bodies, to a packed house upon completion of their time on stage. No matter which sister is at the front singing her songs, the authenticity is overwhelming. Peyton seems to be the much stronger drummer of the two so when Kelli picks up her 3 string bassitar and bellows her melodies and lyrics into the microphone, it’s hard not to be swept away, whether you’re an adolescent girl or a man in his late 30’s with a bit of salt and pepper in his hair.  Impressive would be an understatement when trying to find a word appropriate enough to relay the achievement of having 3 records under your belt before you’re even old enough to vote.  It should be interesting to see how their music evolves over the course of the next few years. 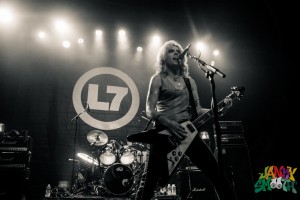 Now, in hindsight, we know why last month’s secret show at the Echo was indeed a warm-up. Last night at the Fonda Theater, the second of L7’s Los Angeles shows, Dee Plakas, Suzi Gardner, Donita Sparks, and Jennifer Finch came out pissing hellfire. It was the setlist and show we wanted all along, with a few rounds of ridiculous banter packed in their pistols for good measure. After an ear-piercing intro by the legendary Donny Popejoy, the girls danced and took the stage to Kool and the Gang’s “Hollywood Swingers” and we all knew we were in for a treat. Donita’s enticing pirate smile quickly turned into a sneer as they ripped, face-first into “Deathwish” off of 1990’s Smell the Magic– Let the headbanging commence. Suzi got us next- cateye sunglasses and tongue-in-cheek banter in tow, with 1994’s single off Hungry for Stink, “Andres”. Sing along after sing along, by the time we got into the 6th song, “Fuel My Fire”, the pit was in full driving force and I could feel Dee’s drums and Finch’s bass vibrating my thighs- a testament to the power of L7. Blessed be. The set was broken up by adorable babble from a barefoot Finch, strange ponderings by Gardner, a plea from Donita for a fan as she almost passed out during “Diet Pill” (another highlight) and Dee smashing into her drums to start the next song. 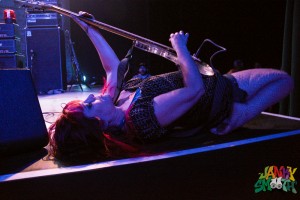 L7 truly embody their Los Angeles roots, equal parts danger and humor, with a side of fuck you too. It is a marvel to see the band, 18 years after their last tour together, and they are thrashing harder than ever- as visually proven by Donita’s cut biceps and Finch’s relentless headbanging. By the time they broke into “Shove”, the entire crowd was whipping their wet hair around, ears ringing, and soon into crowd favorite, “Shitlist”. I doubt anyone had a shred of vocal chords left, save for Donita who roared through every last note.

A truly epic show, they clearly blew the minds and eardrums of friends, fans and music aficionados (noted musician Howie Pyro and legendary DJ Rodney Bingenheimer to name a few) alike. It really was everything we could’ve dreamt of-sweat drenched, no bullshit, LOUD as fuck, rock n roll. Hail to our L.A. queens.