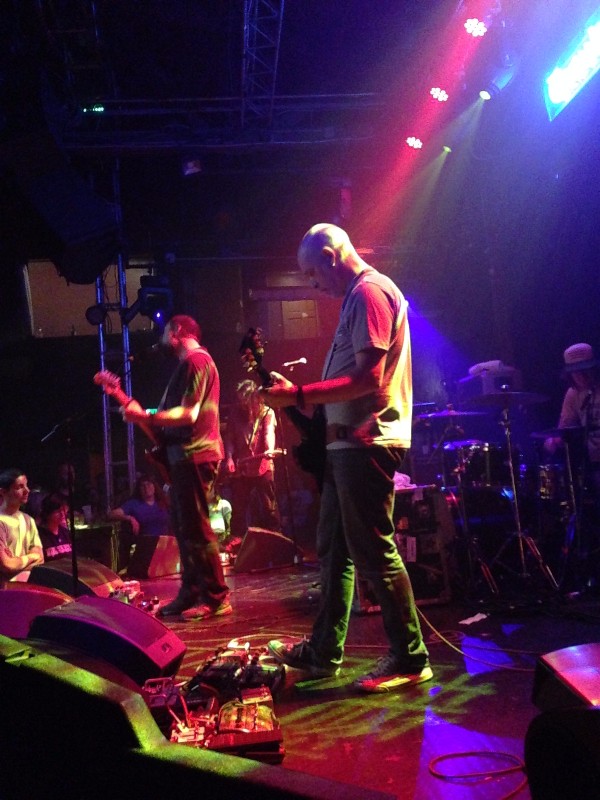 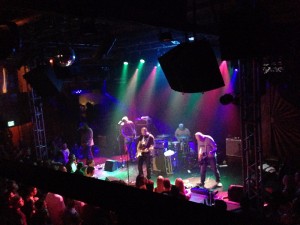 Very seldom do bands remain popular after 23 years of producing music, let alone go on tour and sell out shows. This however, has not been the case for Built to Spill – a band that has been releasing consistently impressive albums since 1993. Over the years, musical maestro, Doug Martsche (singer and guitarist) has experimented with various album concepts, sounds, and even band members, yet has remained undeniably relevant since day one. To this you might reply with something like, “Rolling Stones” but we are talking about an indie band, not a worldwide musical phenomenon that are a household name. After a six-year hiatus, Built to Spill released a new album “Untethered Moon” this past April. With their recent release, the Idaho natives announced a world tour. Yes, a band that premiered their first album when I was only three years old, has been selling out shows on a world tour; and I was fortunate enough to be among one of the attendees.

Slam Dunk, who were partially responsible in inspiring “Untethered Moon,” graced us with their presence before Built To Spill took the stage. As I peered over the balcony above, I noticed a sea of bopping heads flood the floor as Slam Dunk began. I was certain that with their [Slam Dunk] enthusiastic and harmonious vocals combined with brisk guitar riffs, a pit of some sort would ensue. To my surprise, despite witnessing a highly energetic performance, the audience remained relatively reserved. This type of behavior, in combination with the high energy music seemed unfamiliar in comparison to many other shows I have recently attended. This was the first point in which I realized I was in for a night that would be different from the string of L.A. scene shows I’ve been reviewing lately. Not only did Slam Dunk hook it up with a cover of The Cranberries’, “Dreams,” but they also executed a performance that was effervescent and notably tight. Their jaunty performance definitely set the precedent for a night of phenomenal talent.

Still and attentive, the eager audience stood in anticipation during Built to Spill’s sound check. It was evident that these were dedicated fans. I found it strange being in a room that did not smell of BO (I swear I even smelt nag champa at some point) without the familiar faces I had become tiresomely accustomed to lately – a huge change of pace from the fun but all too familiar. 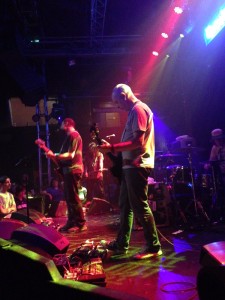 Only three songs in and they played what I would argue is their greatest song, “Carry The Zero”. Martsche’s vocals caused goose bumps up and down my arms and as I looked around I noticed a majority of the room had closed their eyes (whilst Uncle Jimmy played the air drums). Being in this environment was incredibly cathartic. Everyone was captivated by the sound and entered an almost meditative state. It was as if I was watching some sort of healing process, like a group of people performing bikram yoga, except bikram yoga sucks, and watching Built to Spill live does not. With the hypnotic guitar riffs, it was as though the music transcended space and time. At no point did my interest wane or wander; even when the same melody droned on for an extended period of time.
Their set featured songs from multiple decades, including “Distopean Dream Girl” from their 1994 album, “There’s Nothing Wrong With Love” to “Traces” from their 2006 “You in Reverse” album.  Obviously, one of their most recent releases such as “Some Other Song” also made an appearance. There was minimal dialogue during their set as they transitioned from one song to another as gracefully as green leaves to yellow in Autumn. A Gibson Sg and a Fender Strat harmoniously combined and created a dynamic variety of vibrant guitar arrangements. By blending eccentric guitars riffs and noteworthy vocals, Built to Spill delivered a performance that was definitively better live than on a recording – a rarity for bands that have been around as long as they have. As they ended their prodigious set, the audience carried on with applause, not wanting it to end quite yet.

Martsche, being the epically talented, yet amiable human that he is, decided to make an appearance after the show. Instantly, loyal fans gravitated towards him like a seagull after a french fry on the beach. Standing aside, I began a conversation with one devoted fan that described [Built to Spill] as having a “cult following”. She went on to admit she had purchased tickets to all three of the shows they were playing in LA and this was a common thread amongst their “true” fans.

After being terribly exhausted, Martsche took the time to talk to me for a bit and began the conversation with, “Is there anything I can get you to eat, drink or smoke?” After politely declining, I got to explore the Built To Spill legacy.

PV: Was it surprising that, after all of these years, you still have a very dedicated following?

Martsche: Oh yeah absolutely. I just want to be up there acting like a kid having fun, doing what I love. We never really thought about the fact that we’d sell out shows.

PV: You guys seem to have a “cult” following. I spoke to some people who have tickets to all of your shows in LA. Apparently someone is even following you around the west coast, who came down from your last show in Berkeley.

Martsche: It’s weird because this is just fun for us. It’s not like we really expected any of this to come of it. I guess I never really thought of us as a band that has a particular following.

(As if he is completely unaware to their popularity)

PV: You released your first album in 1993, did you think that in 2015 you would not only still be producing music, but would be on a world tour?

Martsche: I mean we started off just making music because it was what we loved to do. We never really had any intent on where it would go. It’s amazing because I can still act like the kid I was when we released our first album. I feel like what we just released (Untethered Moon) is very much a reflection of that. We are just up here playing music that we really fucking like.

PV: It’s almost like it’s just an extended jam session when you play.

Martsche: Oh totally. It’s all just good fun, and it’s really amazing that people like what we do.

PV: You guys have been releasing albums for a very long time now. How much has evolved from say, day one to now?

Martsche: It was really horrible working on certain albums because I was constantly worried about if my voice was in pitch. It took away from the whole idea of making music we really loved. It was more about the technicalities and how good we projected ourselves to be. It became less about the passion. I really believe that this last album has been the attempt to get back to that – to just having fun and acting like a kid again.

PV: I mean in today’s society, would you say there are too many bands in this industry with the wrong intent then? In an extremely competitive field, many bands seem to be terribly concerned with technicalities.

Martsche: Absolutely. People just want to make money off of whatever product they think will succeed. It’s about having fun and producing something you really believe in. It should always be enjoyable.

PV: Would you say you’re pretty much living out your dream then? You know, making music you believe in, and succeeding whilst doing so.

Martsche: I guess I never really looked at it that way, but now that you mention it, I guess we are.

PV: I mean yeah, you guys are playing sold out shows, and still have a VERY dedicated following.

Martsche: When you say it like that, then yes, we are definitely living out the dream in the fact that we are playing music we believe in, and we are making a living off of it. I never really saw any of this coming and I’m just really thankful to be where we are.

PV: That said, are there plans to release new material in the future?

Not only are Built to Spill seasoned veterans and masters of their craft, they are also really nice dudes…like really nice. It brings me an even greater pleasure to their music. I am undoubtedly certain that anything they release in the future will be worth investigating; they’ve been in the game for this long for a reason.