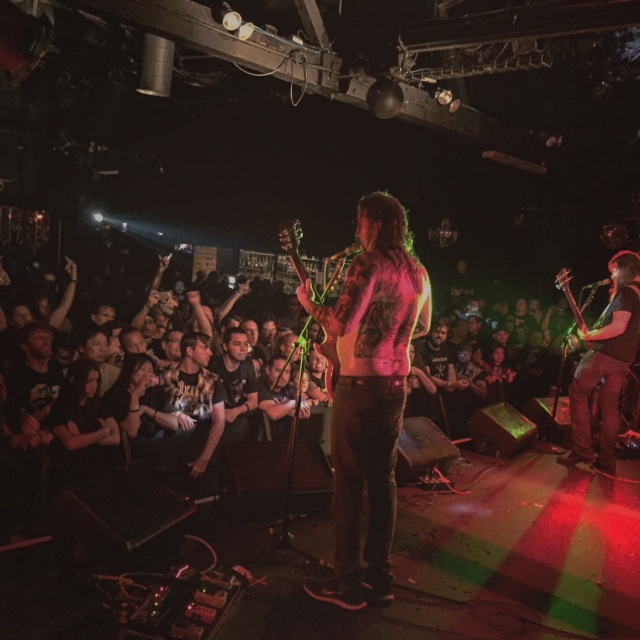 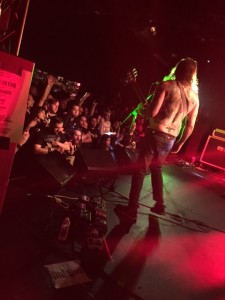 With a massive swell of approval around the release of their 7th studio album, Luminiferous in June, High on Fire was booked by FYF Presents at The Echoplex this past Friday. It was the second stop on a headlining tour that stretches through to the end of August- Pallbearer, Lucifer and Venomous Maximus joined them.

I was torn between this show and Stiff Little Fingers playing the last ever punk show at The House of Blues on the Sunset Strip. Ultimately, I never really liked the House of Blues and it’s corporate vibes and bad parking. Since I saw Stiff Little Fingers a couple times at the end of 2014, I decided I would go see a sick Metal lineup at an independent venue that has it’s finger on the pulse of music. Bye Bye, House of Blues. Don’t let the door hit you on your way out. 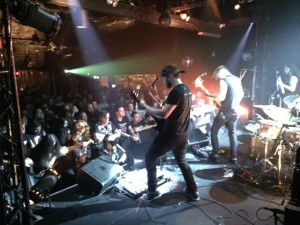 I made it into the Echoplex with enough time to order a drink before Pallbearer took the stage. The venue was completely sold out. There were metal heads as far as the eye could see. I cruised by the merch booth, which was moved to a space in the back of the club that was capable of hosting the overflowing boxes of t shirts that were indicative that this tour was just getting under way. I scanned High on Fire’s selection and thought to myself, “Is there any type of music that has better merch/t shirt design than metal?”  Continuing in the tradition of Pushead, I stood and looked at the amazing t shirt designs of ALL the bands playing that night. And just like that, I was ready for some metal.

Listening to Pallbearer’s music is like wading through waist high swamp land– but in a good way. Distorted riffs synched to half time drum beats make you feel what it must be like running the last 100 yd stretch of a marathon- and then being burned by hellfire when you cross the finish line. Brett Campbell’s vocals sound like a less dynamic, U.S., southern born Ozzy Osbourne. They slogged through their set and really set the tone for High on Fire. 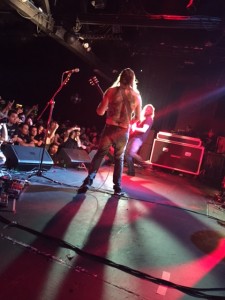 The rare, metal power trio of Matt Pike, Jeff Matz and Des Kensel took the stage to a throng of cheering and hand made devil horns. Seldom have I been this excited to see a band perform songs off a new album when the band is 7 albums in to their career – but it was honestly what I wanted to hear the most. Luminiferous is the second High on Fire album in a row produced by Converge guitarist Kurt Ballou and it’s clearly a winning combination. High on Fire opened with “The Black Plot”, the opening track off Luminiferous. The band wasted no time in transitioning directly into “Speedwolf” off the album, “Death is This Communion”. This was the point, early in the show that my jaw started dropping every time Des Kensel played a fill. Dude is no joke. Not like those Death Metal drummers who trigger blast beats from a sampler. Sacrilege!

Doom Metal, Death Metal, Black Metal, Sludge, Stoner Metal, Viking Metal, Celtic Metal, Grindcore, Industrial Metal, Metal Core, Speed Metal, Thrash and Power Metal– As a teenager who learned how to play guitar with Slayer and Metallica tablature books, I can hardly keep up anymore. I wrote a review about Head Wound City and the bands on Three One G and the evolution of metal and Justin Pearson took exception to being lumped into the Metal category, while I would argue that the influence is indisputable.

With all the sub-genre’s of Metal, there should be one called Honest Metal. High on Fire would be the kings of Honest Metal. The riffs that Matt Pike writes and plays are both classic and innovative and the band is tight. REAL tight. In the end, all these bands and sub genre’s are influenced by a handful of innovators- Black Sabbath, Diamondhead, Judas Priest, Iron Maiden and Slayer. High on Fire recall their fellow, West Coast, thrash metal predecessors such as early Metallica and Exodus. Of all the bands that make up the new wave of metal, (2000- now) In Flames, Mastodon, At The Gates, Opeth, Children of Bodom and so many others that there are too many to list. High on Fire and their father band, Sleep, are in the vain of Metal that I can still connect with.

The Black Plot
Speedwolf
Rumors of War
Carcosa
The Sunless Years
Cometh Down Hessian
Madness of an Architect
The Dark Side of the Compass
10,000 Years
Slave the Hive
Fertile Green
Snakes for the Divine