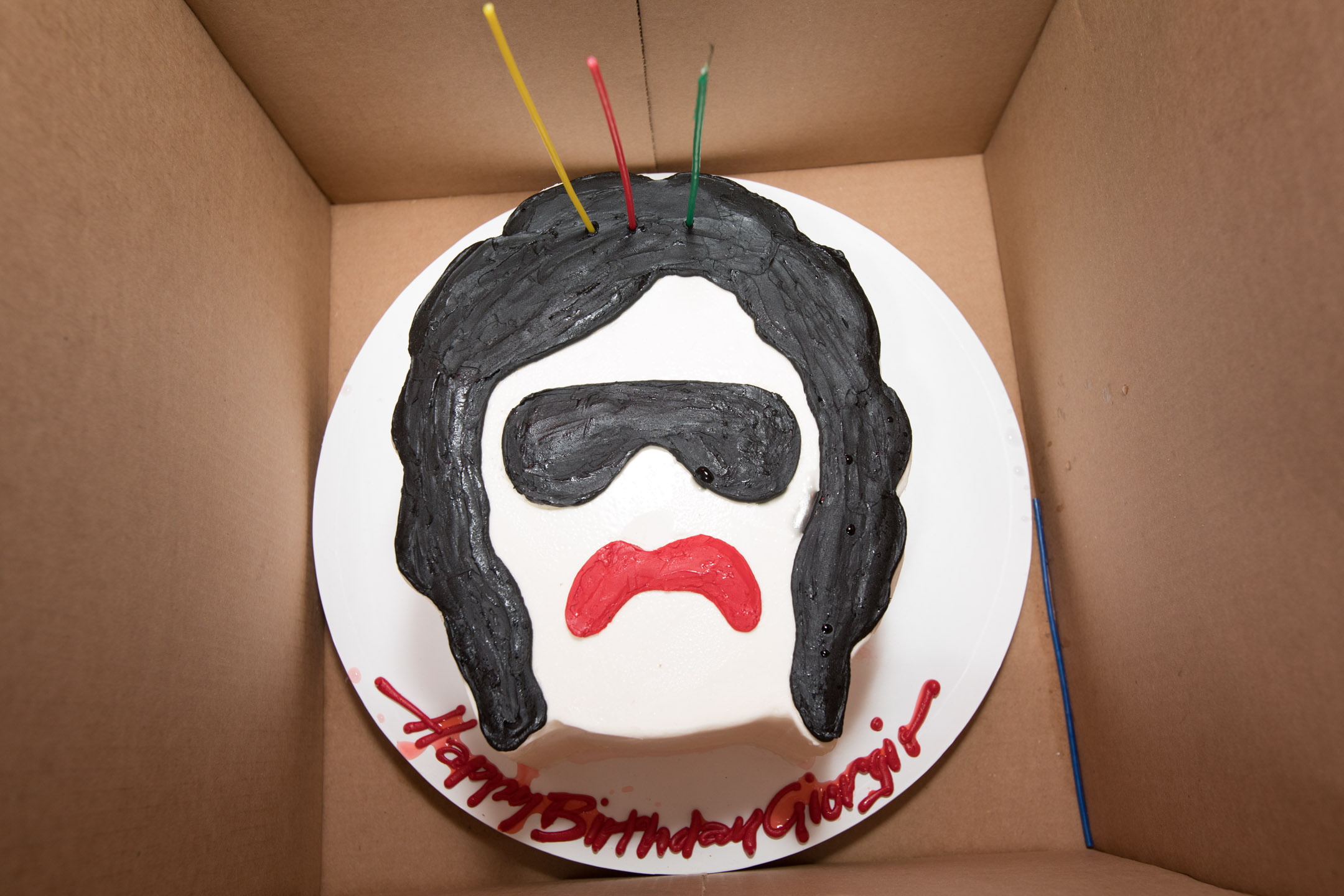 Lately, I’ve been thinking a lot about who we become as we grow older. For all the hype the vitality of youth gets in our society, the shedding of the layers of bullshit that age affords people of all ranks is equally liberating and deserves its time in the sun as more than an ad for adult diapers or awful late-career DeNiro movie (I’m looking at you Dirty Grandpa).

In many ways, this sentiment got its day at Giorgio’s Birthday Celebration at The Globe Thursday before last, with a fascinatingly disparate group of musicians who’re tied together by the knowledge that life is short, so you might as well be yourself. Kicking things off was the token millennial band of the night, Portland-based YACHT. As much as an admitted antipathy I’ve had for their music in the past, they managed to make a believer out of me when it finally clicked early on that the intermittently shitty indie-pop that I thought they were peddling is actually a rather clever satire on bands that are so focused on being “cool,” that they wind up dehumanizing themselves and those around them in the process, all to beats that harken back to everything from classic dub to fascinatingly unique takes on electro-clash. 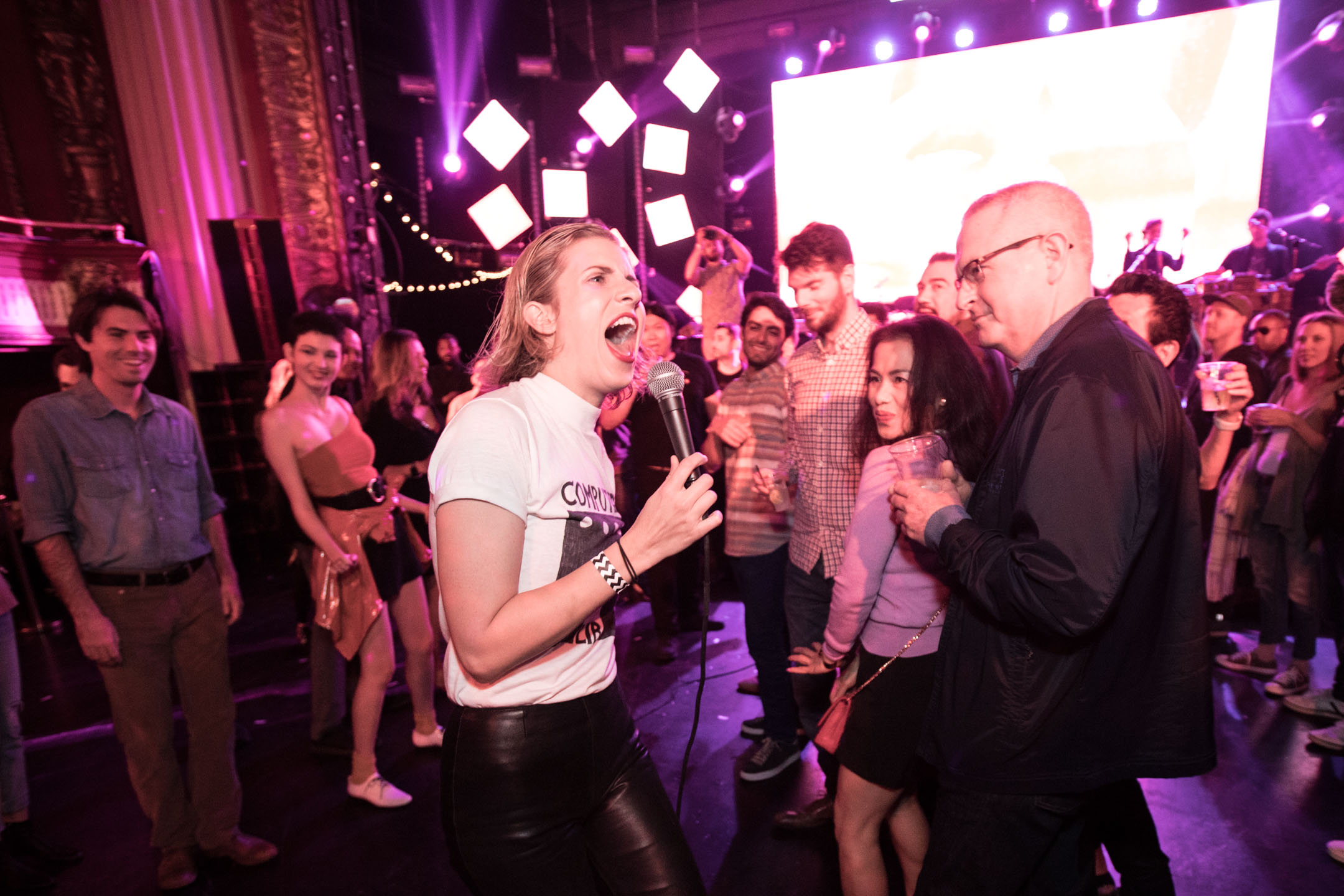 related content: Album Review: Yacht – I Thought The Future Would Be Cooler

With the room filling up and the crowd getting more eclectic by the minute (think a banquet hall that simultaneously booked a Mexican wedding, a corporate retreat, and a drag ball on the same night), Belgian DJ Aeroplane began to prime everyone for the night ahead with disco spins ranging from the classic Gino Socio to the under-appreciated pre-1999 material of Prince.

After what seemed to be an extended changeover, one of the night’s headliners made his grand entrance: the legendary Roy Ayers. While certainly feeling the years that he’s been performing, he didn’t disappoint, evoking the same spirit of jazz which has made his presence transcend age, genre, and cultural boundaries for decades. However, if there was one fault with his set, I would say that it had to do with the very crowd he was performing to. 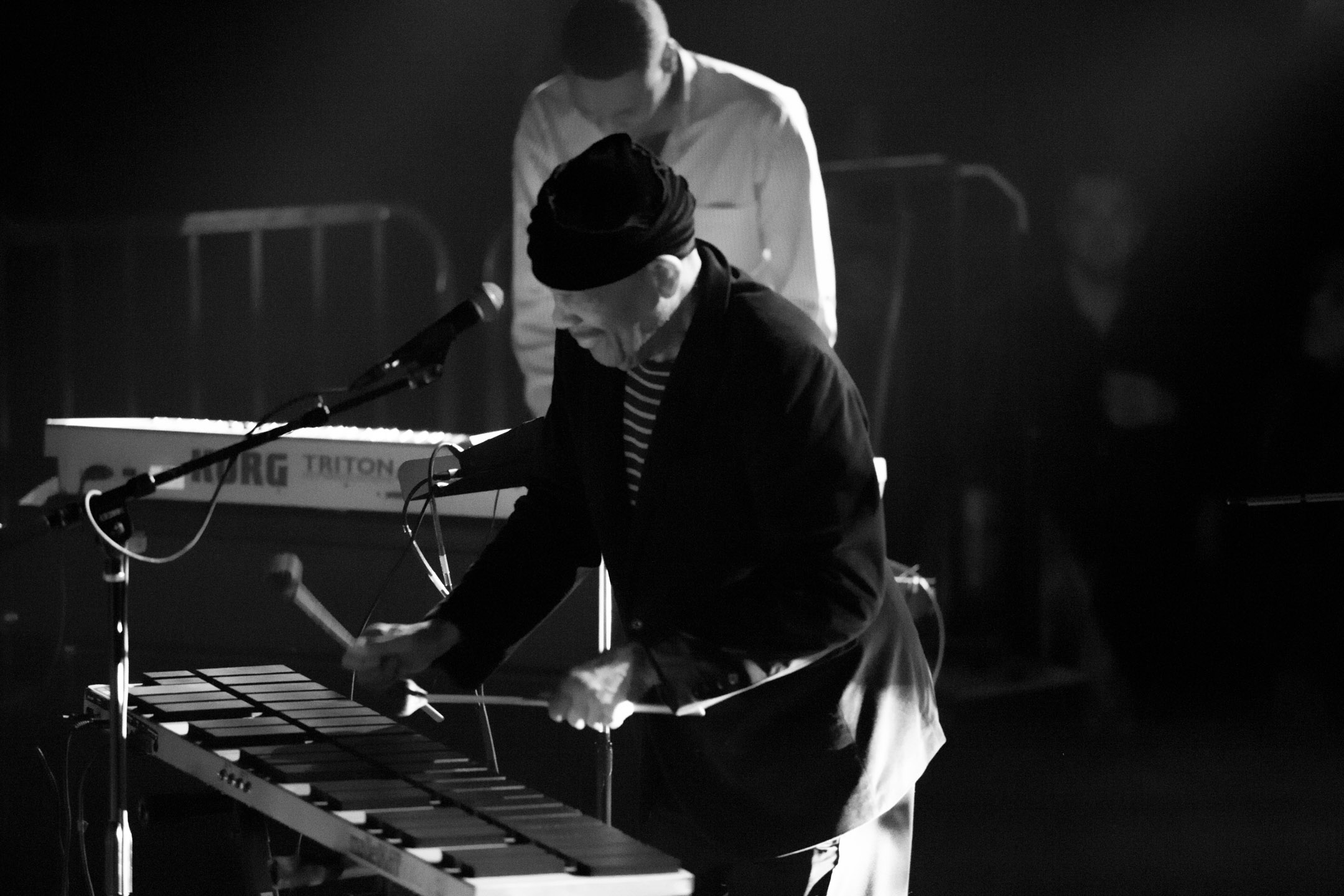 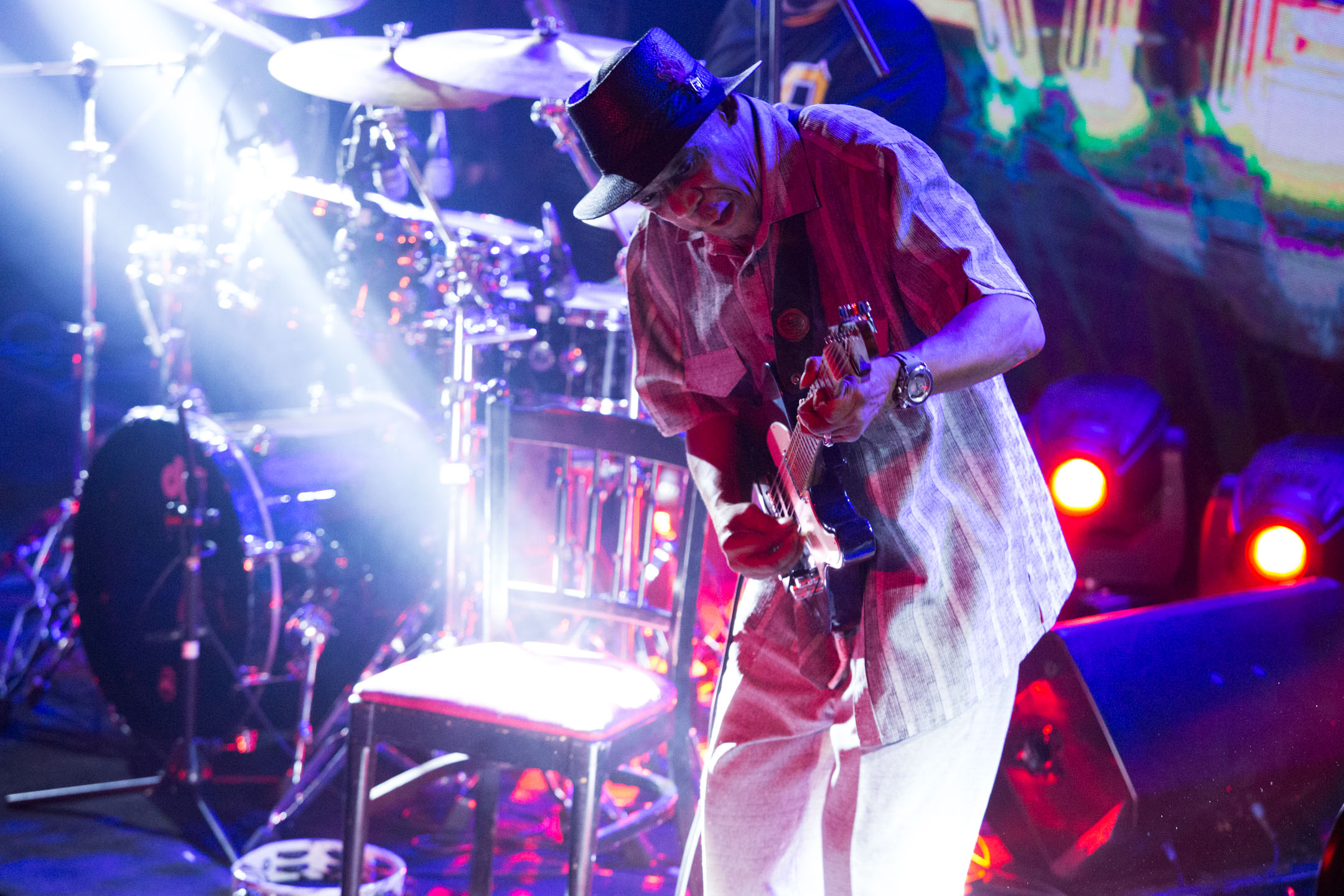 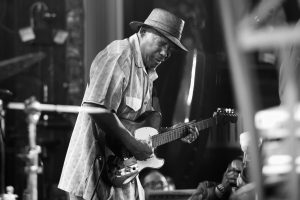 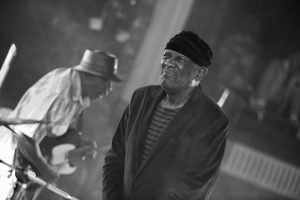 related content: Krautrock Nite With Malcolm Mooney Of Can At Echoplex: To Outer Space And Down To Earth

After his set began to transition towards a number of extended solos for all side musicians in his band, a good portion of the crowd tuned out and talked amongst themselves, possibly confused that the party vibe they came for took a turn into an extended jam session amongst veteran performers, but also ignoring just how incredible what was happening before them really was. Like true professionals though, Ayers and his band kept up the energy almost in spite of this and left the stage knowing that regardless of how a crowd may be, they ultimately still own their place in the history books.

As much swagger as Ayers exhibited walking off the stage though, it was dwarfed in comparison to when the night’s guest of honor, Giorgio Moroder, finally made his entrance a touch after midnight. Walking onto the stage with a grin wider than a football field and an accent that rests squarely between majestic and self-parody, you could tell that this was a performer for whom everything has been icing on the cake. However, would you really expect anything else for someone who’s on par with Meryl Streep and Daniel Day-Lewis for Oscars, did the impossible by successfully re-scoring Fritz Lang’s Metropolis, and received an extended tribute from Daft Punk on their latest album? 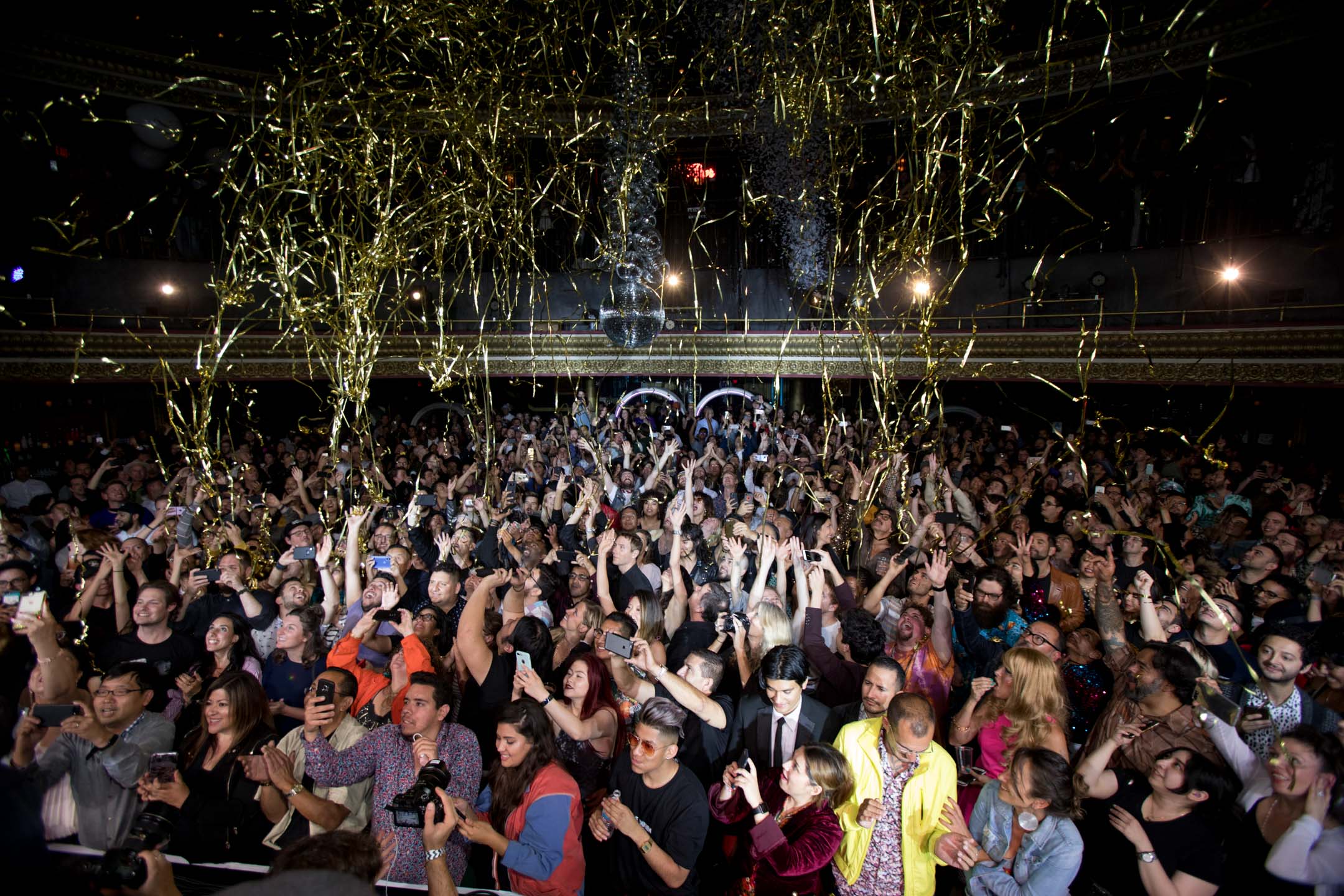 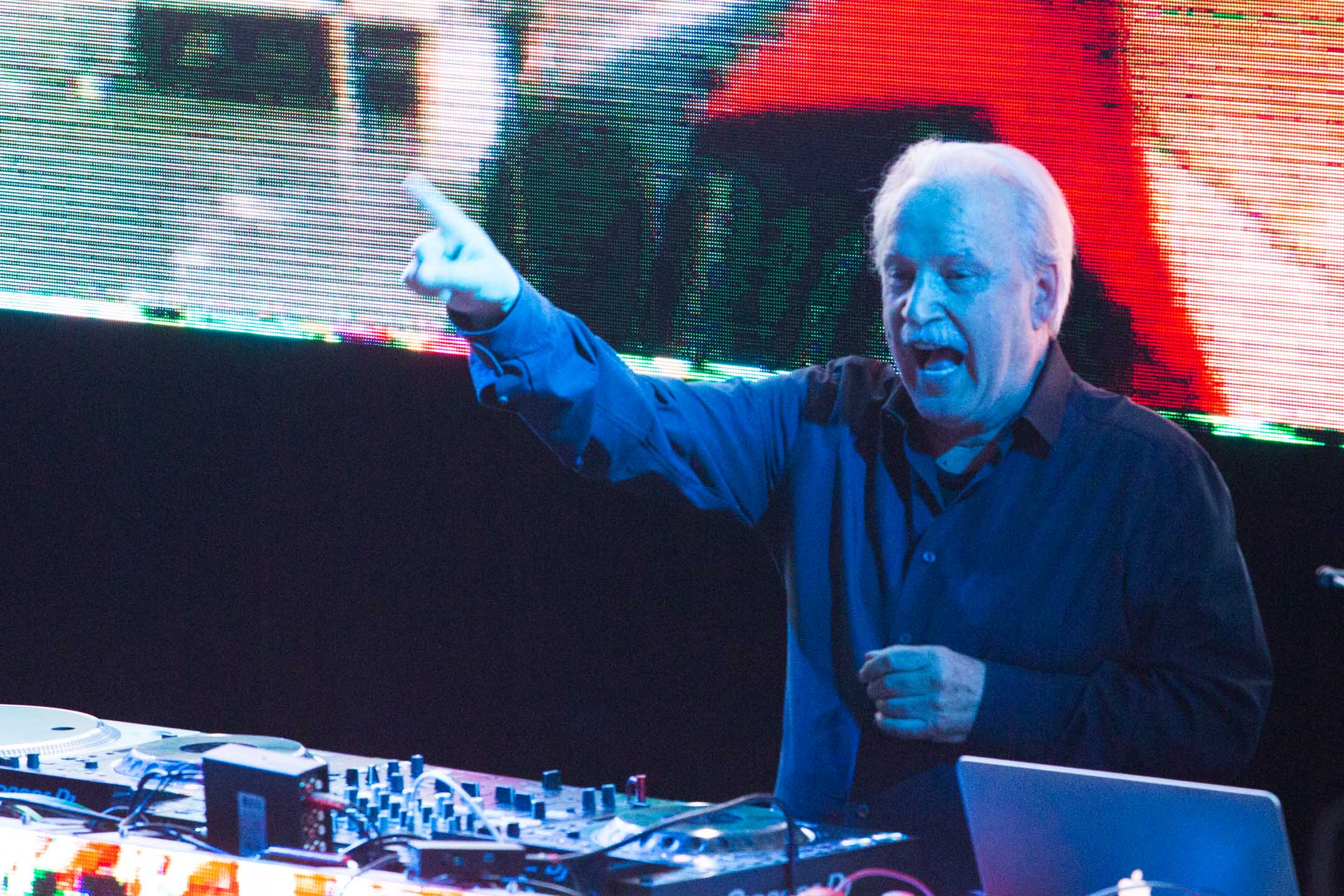 After a few kind words to the crowd and impromptu singing of “Happy Birthday,” he moved immediately into his set, with a hearty helping of Donna Summer punctuated interestingly enough by a good amount of his newer material with Kylie Minogue and Britney Spears among others, while still carving out ample time for his incredible body of soundtrack work.

However, with many of his big hits out of the way, he did something which I honestly didn’t expect, but likely should have: he started mixing current hits which he had no involvement in, including extended tributes to Avicii, Rihanna, and Disclosure among others. While this alienated a good portion of the crowd’s older bloc, and honestly myself, for a period, I came to realize that he and Roy Ayers had the same attitude on display, albeit with different approaches and to a significantly more energized crowd.

Having created the musical foundation upon which most of the hits he was interpolating are built upon, it was not as much that Moroder was attempting to be young and cool, but that we have finally caught up to where he’s been for the last five decades. In many ways, to see someone at his age and caliber embrace the present not as an enemy, but rather as a new friend with similar interests is inspiring and the reason why his music has lasted and continues to last in the hearts of all those willing to let it all go and dance it out, even if only for a few minutes. 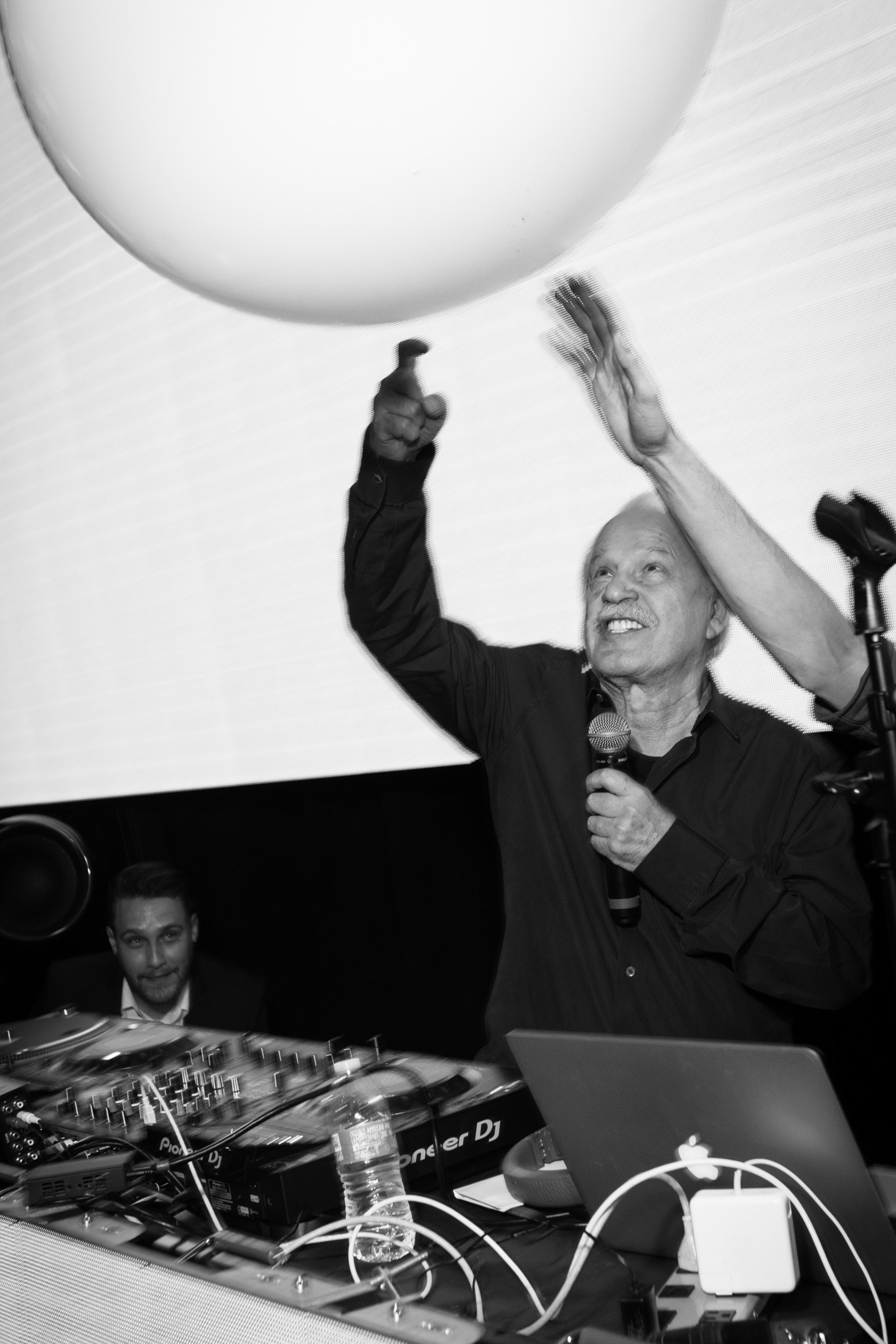