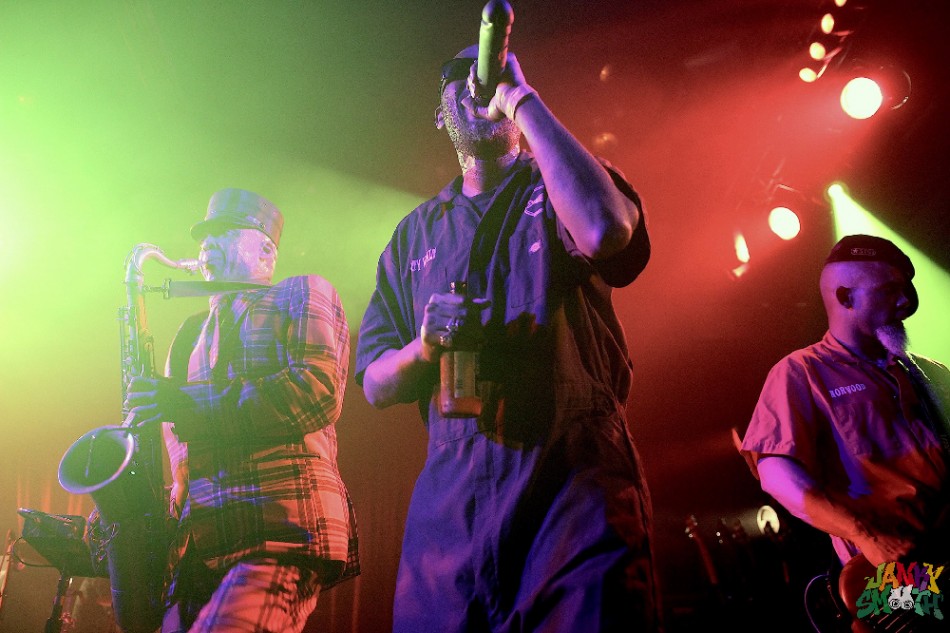 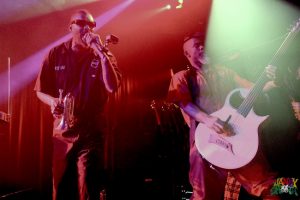 Saturday night at the Echoplex started off with the Uber driver dropping us off in front of The Echo, where we waited outside for 2 minutes before we realized it was the wrong place. So we run across the street down some filthy stairs around a corner and now we are at what appeared to be a back parking lot. A simple barricade across the front of the drive-way and a few security staff in black shirts greet us and conduct a cursory cavity search and inspection of our immediate threat level. My friend has her trusted ass-pocket flask, (empty by now) confiscated with the promise it will be returned at the end of the night. We are ushered passed a mountain of trash bags and assorted garbage piled high along the side of the building. Just another by-product of the glamour and the glitz of Los Angeles nightlife and moments away from yet another Fishbone show under my belt. 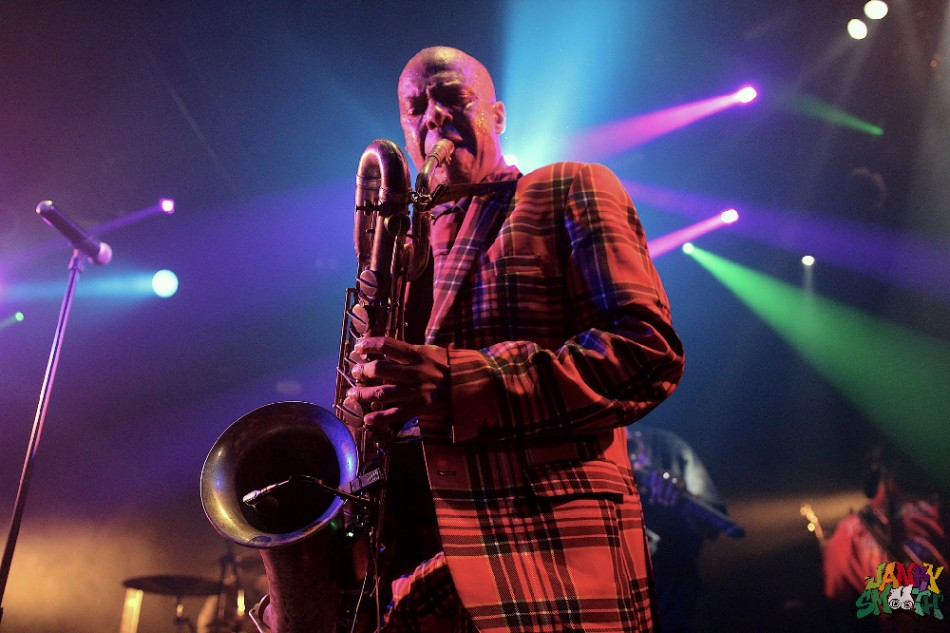 Once inside, the show was already in full swing with the latest offering from drummer Stephen Perkins (Janes Addiction/Porno for Pyros) entitled Tabitha– a powerhouse trio consisting of Perkins and the Okai Sisters (originally from Tokyo) on Guitar and Bass. They pulled no punches with their musical delivery and were well received by the expanding crowd. From what I saw, the set was comprised of all instrumental numbers.

Off to the patio to drink, smoke and mingle with my fellow Fishbone Soldiers before it was time for the main course.

Performing all of the 1996 LP Chim Chim’s Badass Revenge (15 tracks in total), plus many of their classic numbers interwoven throughout the night, Fishbone once again proved that they can cover more musical ground in one song than most acts are lucky to survey in their entire career. 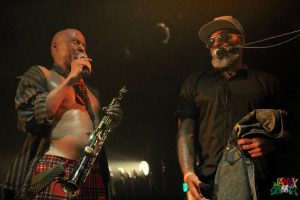 Before the band even took the stage, the presence of a DW Drum kit set up sideways should have been a major clue that this was going to be a special night, as this could only mean one thing to anyone that is a fan of the original line-up, the return of Philip “Fish” Fisher on drums. Fisher, brother of Norwood Fisher (bass/vocals), left the band back in ’98 and has been sorely missed.

As the members of the band took the stage and were situating themselves accordingly, Angelo Moore (lead vocals, saxophone and theremin) gave a brief invocation of positivity before they leapt into a heartfelt rendition of “Unyielding Conditioning”- An upbeat, feel-good number from the 1993 LP “Give A Monkey a Brain…” The 7-man line-up barely fit on the modest stage, but seemed in no way hindered by the tight squeeze. 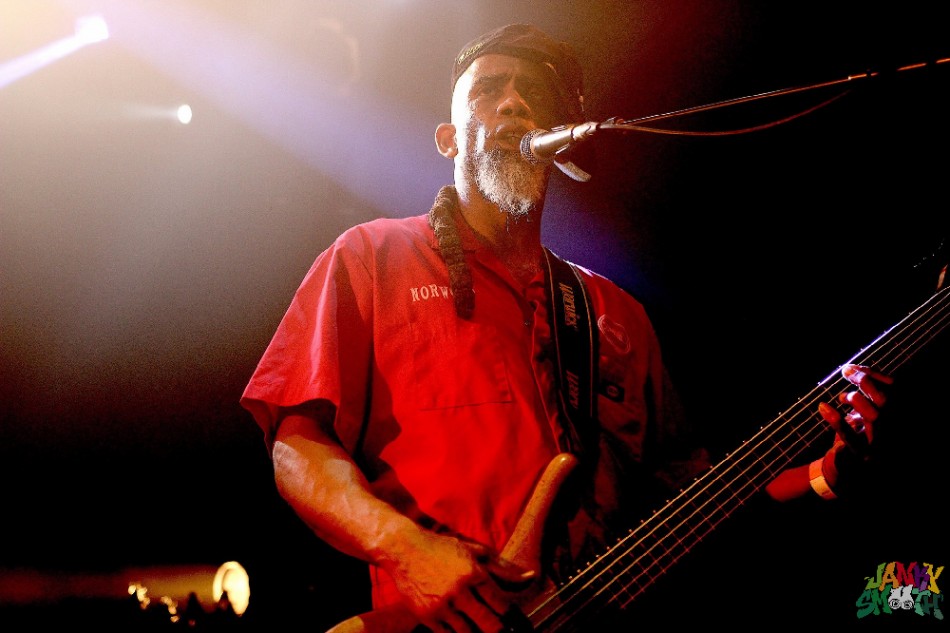 The band then proceeded to rocket through a handful of classic Fishbone gems, “Cholly” and “Knock It” both from the 1986 LP “In Your Face”, seemed to possess a determination in the groove that has been absent for many years. The Curtis Mayfield classic “Freddie’s Dead” has become a Fishbone standard ever since it was the opening number off of their sophomore release, 1986’s Truth and Soul and  even though they have probably played it every other night for the past 30 years, it was delivered with an urgency and passion that can’t be faked. It is safe to say that at this point that song has the glorious stink of Fishbone permanently stamped on it.
Then Norwood (@woodywoodstraw) addressed the crowd in his gravelly voice ….. 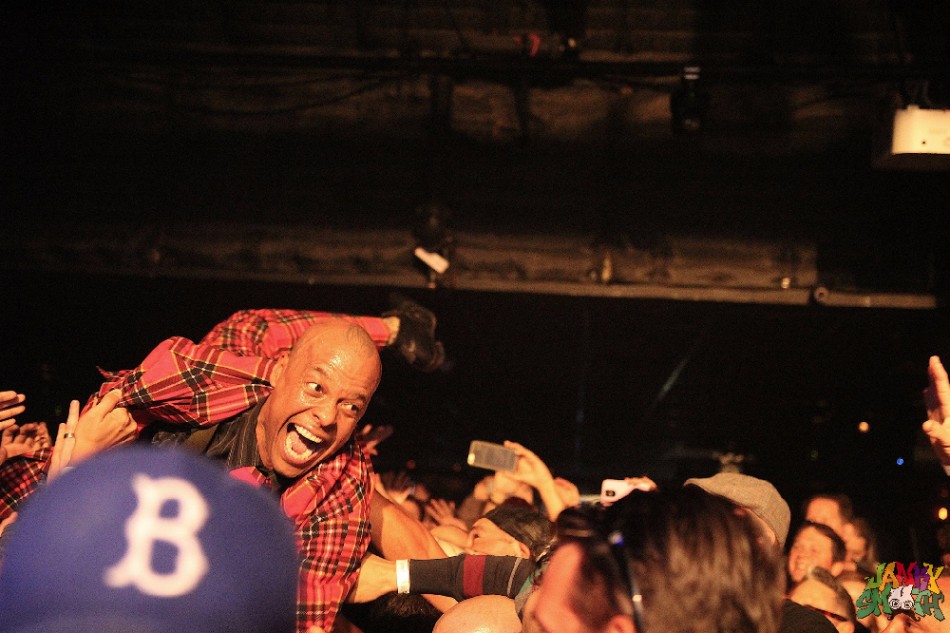 This was fair warning to the Fishbone Soldiers in the crowd that things were about to get nutty in the mosh pit. One of the bands heaviest numbers, the concussion-causing “Swim” is a pure slab of grinding, almost grungelike, heavy metal that immediately whips the crowd into a type of frenzy that is half whirling dervish and half conniption fit. 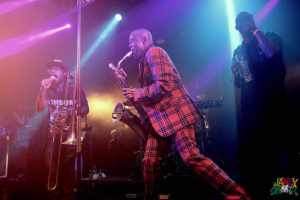 It is at this point things the show was really about to begin… Angelo stage dove, crowd surfed over my head and then crowd crashed on top of a few lucky attendees before being resurrected and re-delivered to the stage. I simply don’t think he is as light as he used to be.

As they plowed through the meat and potatoes of Chim Chim’s with songs like the romping “Beergut”, “Alcoholic”, “Love-Hate”, and the sexy-funky-nasty “Sourpuss” it was plain to see that they were not only feelin’ it, but they were having the time of their lives.

Even Walter “Dirty Walt” Kibby (vocals /trumpet) and Angelo appeared to share a few laughs on stage. These are two very different kind of people that have shared lead vocals in the band since they were teenagers. And they don’t always get along.

When a band has existed as an actively recording and touring act for any length of time they are expected to have some sordid history, a few skeletons in the road case. FISHBONE has an Epic saga more akin to an organized crime family than a rock band. 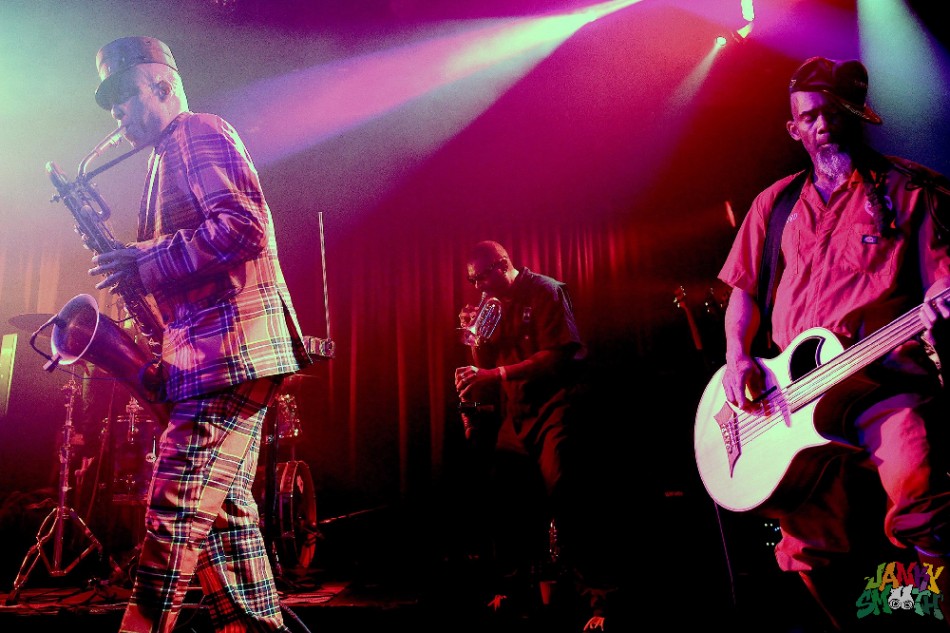 {For further details on this I highly recommend the award-winning documentary “Everyday Sunshine, the story of Fishbone”} 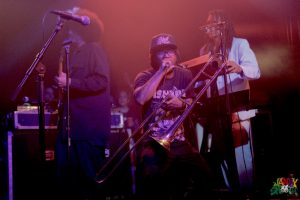 Ensconced within his keyboard rig like a soldier in a foxhole, the latest member to the group, Paul Hampton (formerly of The Skeletones) is a perfect fit. Not too overbearing, yet not at all indispensable. Although he is well over 6 feet tall, Hampton at times was completely eclipsed by the beach ball-like afro of Guitarist Rocky George. Bouncing in between the two of them all night was Trombonist, vocalist, utility player and hype man, “Flyin” Jay Armant. “Flyin” Jay is named so due to his propensity to propel from the stage into the crowd at the most opportune moments. His jockey-type stature and completely fearless attitude make him the ultimate crowd surfer. Since joining Fishbone in 2010, Flyin’ Jay has steadily won over the hearts of Fishbone soldiers with his spot on brass technique, powerful background vocals, and unabashed love for smoking blunts on Instagram.

Special guest Fernando Pullum’s performance of the outro trumpet riff on “Sunless Saturday” didn’t go off as smooth as planned, so they simply played the end again and let him riff for a few bars. It was truly awesome. Fernando is an immensely talented horn player, and a former mentor and teacher of “Flyin” Jay. 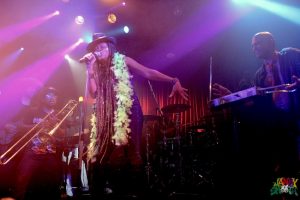 For the encore another special guest Joi Gilliam brought the sauce with a pair of Betty Davis cover tunes that made the whole thing seem very, Parliment/Funkadelic. ( never a bad thing)

As they launched into to the frat-house classic “Party at Ground Zero” I wondered how on earth they are still doing this after all these years. God Bless Fishbone.

By the end of the night the crowd was spent and the band, once again stood triumphant and in case you were wondering, when we left, we got the ass-pocket flask back, just as promised- a perfect night… 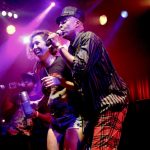 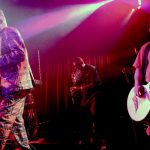 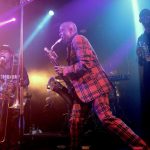 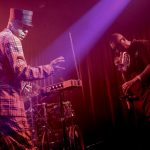 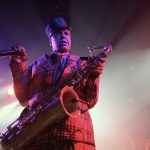 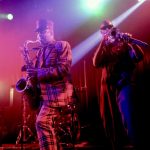 … and more proof that Fishbone is the greatest live band of all time.