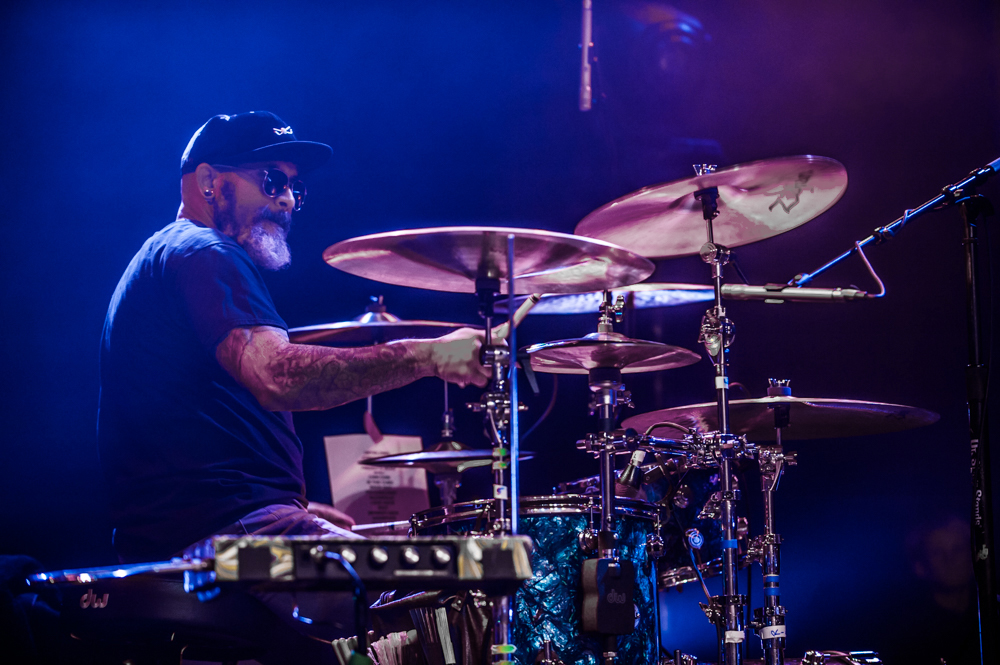 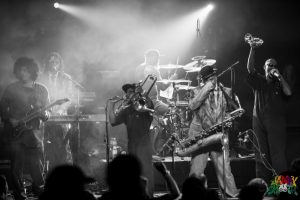 2016 was coming to a close and I was finally getting a chance to check out a show at The Observatory in Santa Ana.  As curious as I was, who the hell would get me to drive all the way down to Santa Ana from LA on a Monday evening? The Legendary FISHBONE, that’s who! Sprinkle on top of that, the fact that one of LA’s finest musicians, Philip “FISH” Fisher would be on the Fishbone drum kit this night, and I was instantly more than game to brawl with Monday rush hour traffic to go and see the band’s Original Members Return, as they have for the past few years, one by one. 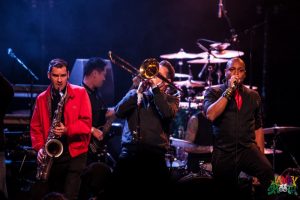 First up on the bill were STARPOOL, an OC Ska/Rock band that definitely has some punch.  The band kicked out a nice blend of Ska/Reggae, Rock and World Beat and was fronted by a strong singer in one, Alan Meade. I was impressed by their tight sound, confidence and a set list filled with great songs. The crowd was very receptive to them but being a quality band was the key to the crowd’s enthusiasm as much as OC based Starpool having a home field advantage at The Observatory. The horn section knew how to blow and the rhythm section locked in and kept that danceable groove going. They were a great opener for the headliners, Fishbone. Playing with such legends obviously fueled their desire to rock the club and they did so, formidably. They are sure to emerge as one of the area’s better live bands to see. 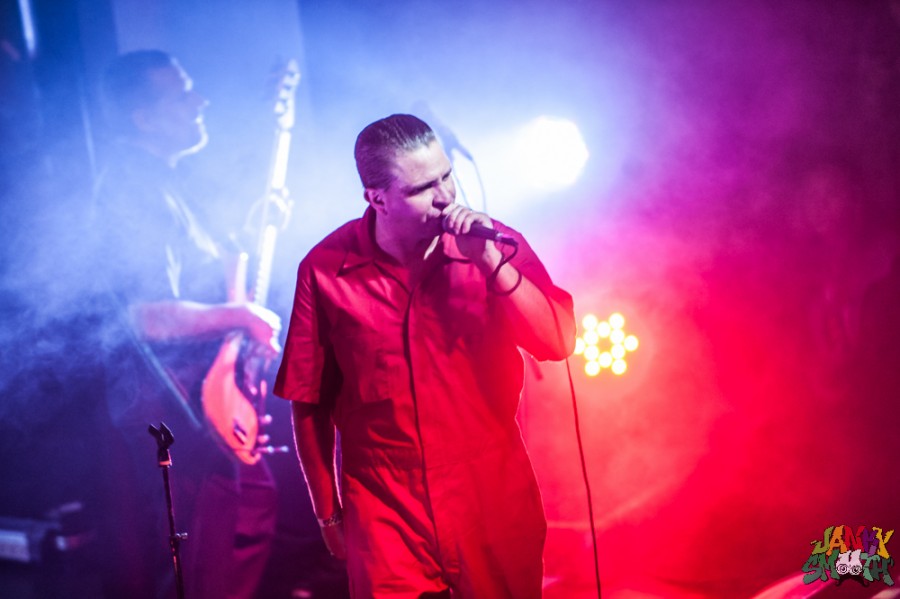 The Aggrolites by Jessica Moncrief 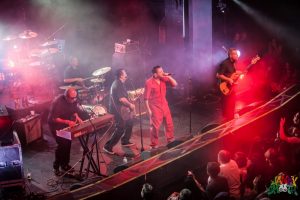 The Aggrolites at the Observatory

Now who doesn’t know THE AGGROLITES? Having been around for nearly 15 years, this band absolutely knows what to do with a house full of eager fans. What has set the band apart from the pack for so long is their ability to sound like authentic Reggae/Ska.  They sound completely different than other same-genre bands because there’s proper SPACE in their music. Anyone who is a fan of reggae music feels it immediately when the Aggrolites perform.That space has got to be there in order for the music to breathe.

The Aggrolites did more than make the music breath, they killed the Observatory crowd with an unbeatable groove, then performed CPR on them to get them to breathe again…but breathe right this time.  Once their audience had that experience with them, they all came back to life, having seen the light. The band calls their sound, “Dirty Reggae” probably because there’s none of the filtering of their sound for pop audiences. They gave the raw stuff, and achieved sounding like the real deal from note #1. Vocalist, Jesse Wagner used his rough tone to both soothe and call the audience to action. The guy knew how to work a room, standing on the edge of the stage and commanding concert goers to sing and respond to the band’s mesmerizing show. As the rhythm section played a groove that most bands could never touch, keyboardist Roger Rivas, framed the vocals with aggressive, yet supporting grooves and flourishes, locking-in the band’s signature sound. It’s nearly impossible to fight off the magic the band conjures as their’s is a sound you don’t get to hear often- unless you live in Jamaica. These cats could get props if they played in Kingston! 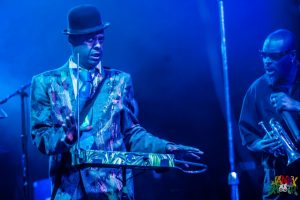 At last, we got to see the band of the night.  FISHBONE took to the stage and brought with them the best treat of the holiday season – PHILIP “FISH” FISHER on the drum kit! It had been some 18 years since he last sat at the Fishbone drummer’s throne and the crowd was electric in anticipation. Triumphantly, he began powering the band he co-founded with ANGELO MOORE (Lead Vocals, Sax, Theremin), NORWOOD FISHER (Bass, Vocals), & WALT “DIRTY WALT” KIBBY (Trumpet, Vocals). This was the closest to a true, “original-member reunion” long-time fans had ever witnessed and when you round out the band with such stellar “new” members as Rocky George (Gutiar – exSuicidal Tendencies), Paul Hampton (Keys, Vocals -Skeletones) & “Flyin” Jay Armant (Trombone, Vocals), you realize that this band was born a super-group.  Fishbone inspired it’s fans to frenzy by playing so many classic Fishbone songs. They immediately launched into favorites like “Unyielding Conditioning,” “Pray to the Junkiemaker,” ‘Lemon Merengue,” & “Freddy’s Dead!”  They let the audience know that is would be a show propelled with familiar sounds that would span the band’s career. 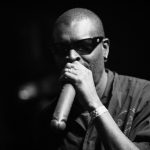 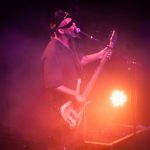 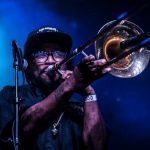 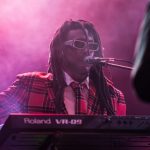 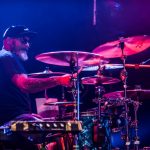 This night, the great thing was that the rare, energetic connection between drummer and singer that established the band as one of the all-time best, was served up hot and fresh and funky.  For my money, there’s no better frontman than Angelo Moore.  And to hear his singing in tandem with Fish’s percussive bombast was rapturous!  The smiles and sweat on the faces of crowd members showed their approval and the band rocked in the morning hours.  And what’s more, Fishbone wrapped up the set by bringing out vocalist Chezere Brathwaite to help the band cap the night with the Fishbone classic, “Lyin’ Ass Bitch!” Most of us were introduced to the band by this song and the show’s closer, “Party at Ground Zero,” the anthem for all who raised a middle-finger salute to the Cold War anxiety of the 80’s. 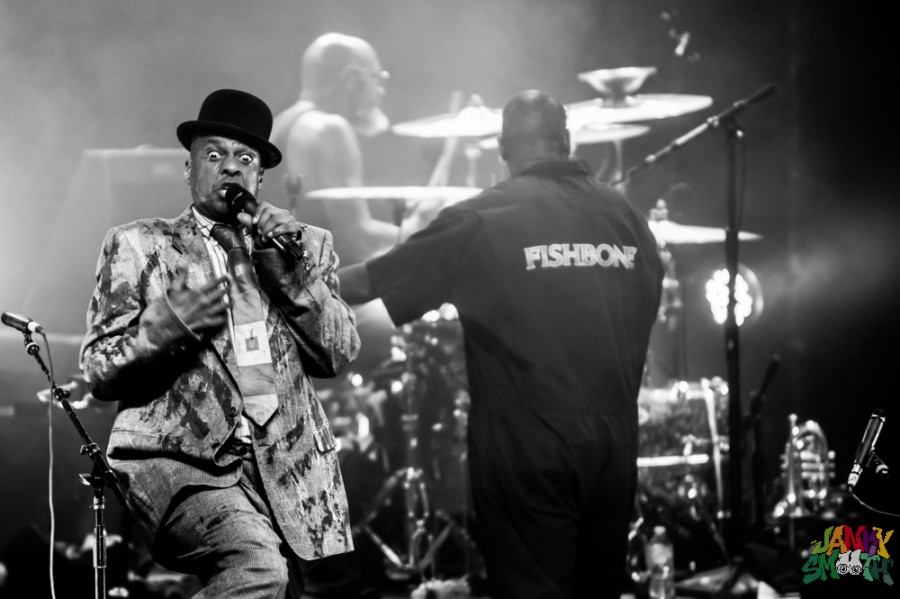 When it was all over, I stood among the exhausted crowd, floating towards the exits, looking down only to participate in the punk-rock lottery (which sometimes yields prizes left by ferocious pits or hard dancing). Other than that, I left with my head held high, knowing I just witnessed a show for the ages.