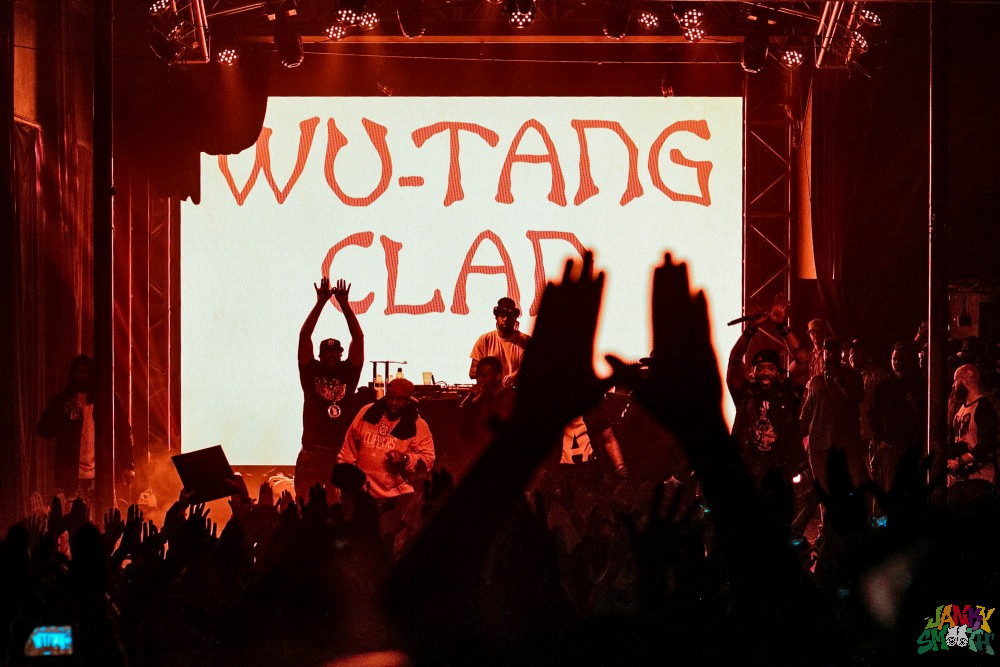 The Evolution of Wu-Tang Clan and Orange County As I walked up to the Observatory, it hit me that Orange County wasn’t the suburban utopia it’s fair skinned pilgrim settlers envisioned when they fled the cities so many moons ago.  I can’t remember the last time I had seen such a diverse group of people at a show in Orange County- if you’ve ever been to a show at The Galaxy then you know what I’m talking about.  First step into the venue and the room was already near capacity.  Fat-Lip of The Pharcyde was spinning 90’s throw-back jams while people were already starting to bunch up. The anticipation level for Wu-Tang Clan to take the stage was at full boiling point by the end of the DJ set, with people chanting, “Wu-Tang Clan Ain’t Nuthin’ ta Fuck Wit” at high decibel.

I decided to ditch the side stage before the band came on, and left to view the set from the upper balcony, joined by my close friend Donny– Wu-Tang, like the drugs they rap about, is always better shared than alone. The show opened by having individual members enter the stage one by one and teasing verses of much of their solo careers. When the beat dropped to the opening track to GZA’s “Liquid Swords”, it brought everyone in the house together.  The recently minted as platinum album is the only Wu-Tang related solo album in nearly twenty years to receive this honor and probably achieved that status for being the standout, seminal solo Wu spinoff that stood the test of time, specifically for the millennial generation.

It was amazing to see the entire group backing each other up, even on the songs they weren’t featured on. Their cuts are older than a large portion of their audience and were all immediately recognized by the first couple bars by the entire pit at the club, while proudly gettin’ their lean on and partaking in rapping with the band under clouds of  schmoke.

Technology has changed so much in the twenty five year career of the Wu, which was apparent by the quality of music videos that adorned the backdrop of the stage throughout the performance. The videos shot over the band’s entire career show an aging crew but not in a sad bastard way but embracing their years as gains of wisdom, not a passage of time. What’s most impressive about this, however, is how their original album still resonates so strongly with generation after generation.  The verses not only retain their strength but have improved with time. RZA standing out front and center for the majority of the performance,insures the origin of the term M.C. is never lost on newer generations of rap fans, still bringing meaning to the term, Master of Ceremonies. Method Man at The Observatory by Jessica Moncrief When Wu-Tang started playing “Bring Da Ruckus” track 1 off of 1993’s Enter the Wu: The 36 Chambers, the faces in the crowd stood waiting for Method Man to finally grace the spotlight. When he arrived for his part on“Wu-Tang Clan Ain’t Nuthin’ ta Fuck Wit” , he stood front & center, dancing on the speakers and reaching out into the crowd. RZA stood proudly behind spraying all who crossed his path bottles of water and grinning with a full-fledged smile. Twenty years after their follow up album, Wu- Tang Forever, was released, and they still receive the same, if not more admiration from the people they share their craft with. Perhaps Forever was a premonition to the band’s longevity and resonance with a younger audience. It has certainly been referred to as a rite of passage for the majority of my generation.

Young Dirty Bastard and the Legacy of Ol’ Dirty

All 9 living members were present though performances were not shared equally. Throughout the nearly 90 minute set, the singles and hits were played, and it was obvious that the band was not using this show as an opportunity to promote anything else, just give the audience a chance to experience their most revered material. The evening included several special guests, the most surprising being the YDB, “Young Dirty Bastard”, who RZA introduced, and revealed was Ol’ Dirty Bastard’s firstborn. RZA also briefly paused the set, gaining the audience’s full attention before presenting YDB with his first public offer to release a proper album, with RZA himself offering to produce. If this will come to fruition, it will be one of the most unique collaborations in the history of hip-hop, and a true sign that Young Dirty has the potential to follow in his father’s footsteps, though those are very big shoes to fill. Still, his performances of “Got your Money” and “Shimmy Shimmy Ya” were well received, and he does move and mimic his father with extreme accuracy. Other highlights of the evening’s set were classics such as, “Shame on a N*gga” and “M.E.T.H.O.D. Man” which both boast some of the band’s most popular verses and still remain two of my favorite performances in Method Man’s arsenal. He also treated the audience to a rare rendition of “Da Rockwilder”, again assisted by the full team, showing that despite whatever solo success certain members have had, they are all still willing to support. Raekwon and Inspectah Deck each shined on C.R.E.A.M. one of the band’s final performances of the evening, in addition to Ghostface’s verse on “Gravel Pit”.

C.R.E.A.M. from Wu-tang performance in Downtown L.A. at the club formerly known as Nokia

Lifted by The Group But Still Shine as Individuals As a final farewell, RZA stood out front and had each member of the group demonstrate their a capella’s, asking the audience to film this on their phones because it had never happened since the band was starting out, and might not happen again. What followed was a twelve minute showcase of individualized free-styling and beat-less rhymes, while each member shined on their own individual chance with the spotlight on stage. This solidified the evening’s performance as something those there will never forget.

I can say with full certainty that I have never seen the Observatory, nor the Galaxy this full in over ten years of attending shows, and have never seen an audience so loud and energetic, get so hyped AND respectfully quiet in the right moments while maintaining their interest in the performer on stage. Overall it was one of the best event’s I have seen in Orange County in the three years I’ve been back, and has helped to restore my faith in hip-hop shows at the Observatory, right up there with Token’s performance on the Hopsin Tour this past Winter. Let’s hope they can continue to keep bringing the ruckus through 2017.