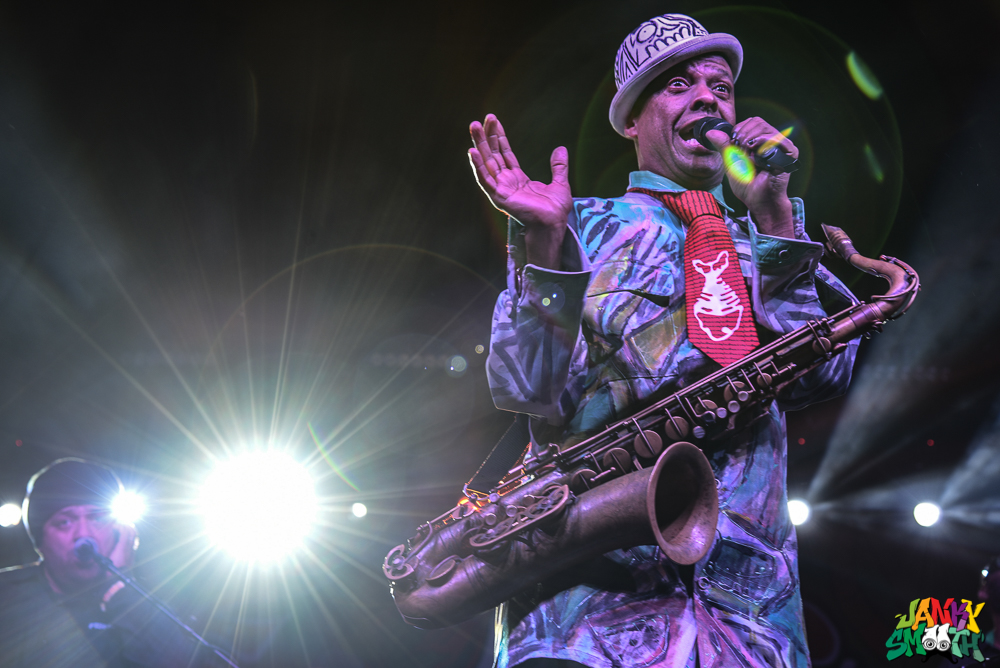 The fourth year since its inception, One Love Cali Reggae festival is held annually at the historic Queen Mary of Long Beach. Boasting its luscious landscape of the city skyline with a view of palm trees, the Queen creates the perfectly chill atmosphere and vibe rain or shine – and we had plenty of both. This reggae fest was a treat being so close to home with powerful headliners featured throughout the weekend on two stages including legends and power hitters in the reggae circuit including artists likeRebelution, Slightly Stoopid, Stick Figure, and Yellowman. Parking was surprisingly painless and easy, and the shuttles to and from the festival were quick. Vendors were plenty, including an Organic Truck with their fried avocado and vegan dishes, a Swisher Sweet booth, and MMJ dispensaries including Long Beach’s local One Love. LBPD was definitely present, but everyone seemed to be having fun and their presence didn’t prevent the crowd from responding to the positive energy, music, and ganja love. Iya Terra performed on the SMKFLWR stage on Friday, they ordered the audience “Let me hear you scream as loud as you can right now,” before they went into “By Your Side”, which melted into their own version of a very stony ‘Breathe’ by Pink Floyd. Landon McNamara who also played on the same stage had everyone in the crowd singing along in his set. The standout of the evening  on the SMKFLWR stage was by Trevor Hall, an ISOMATA (Idyllwild School of Music & The Arts) colleague who began his set with “Green Mountain State”, incorporating heavy percussion and guitar strumming along with a voice that moves you and is one that you never forget. I was truly enamored by the fellow musicianship he and his bandmates shared, a unity that the audience reciprocated back to them with love and adoration. While heading back to the main stage to catch Tribal Seeds, I met Artie Bedford, an accountant from nearby Riverside county who told me this was his 2nd year in a row attending One Love. “I love the atmosphere here,” he tells me. “It’s always such a great time, you always meet such great people.”

The Koi stage included Stick Figure who opened their set with Above the Storm. Rebelution closed out the night on the Koi stage opening their set with “DeStress” and everyone was dancing and having a good time. After a couple songs by Rebelution, I caught The Delirians on the SMKFLWR stage closing the night.

Matisyahu was an artist performing on the Koi stage Saturday. His deep bass lines were hard to miss. Fortunate Youth and SOJA were also headliners of the Koi stage, along with The Dirty Heads, however, it was the SMKFLWR stage that stole the night with standout performances by Lee Scratch Perry and Yellowman who is known for his youthful energy and catchy lyrics. He introduced his daughter Kareema onstage and aseds how the crowd is doing, to which a roar of applause is heard. They performed a couple songs together including “Nobody Move/ Nobody Get Hurt” and after the show I caught up with Kareema who wanted to share a few words. ”One Love encompasses why we love Cali so much.,” she begins. “The love is always real!”I ask her if there’s any new material in the works for us fans of Yellowman and she adds “Daddy’s got a new album coming out, on the family label.  Some surprises are in the pipeline of that release“ she shared with me. I ventured back to the Koi stage for Slightly Stoopid, they were outstanding, their label producer Jon Phillips of Silverback Records was hanging out in the photo pit which I thought was pretty cool. These guys are always so down to Earth. Some of the coolest human beings I’ve ever met. Pato Banton delivered a stand out performance followed by Fishbone. Lead singer/saxophonist, Angelo Moore, came right into the audience, shaking hands and singing up close for his fans. These guys are just all around bad ass and full of fun! Fishbone always puts on a great show. My camera was outfitted with a waterproof bag for the last day of One Love, and the rain came pouring down as I entered the festival. Walking straight over to the Koi stage to catch Common Kings,I saw wood chips quickly filling the grounds that were placed over puddles and slippery mud, yet the photo pit of the Koi stage remained a safety hazard the entire evening.  The vibe was great though. Atmosphere was something from another planet, I am convinced, and it was all about the atmosphere, rain or shine. These guys were the headliners, and they performed brilliantly with force. Back at the SMKFLWR stage Kyle Smith delivered a strong set, and B Foundation followed. As I walked back to the main stage, the sweet symphonic sounds of A Clockwork Orange blasted through the speakers, and shortly after Sublime with Rome opened with “Wrong Way.”  After a couple songs, I headed back to the SMKFLWR stage for the final performance of the weekend with Fiji, the Bob Marley of the islands. Original music with passion and grace. The crowd loved it.