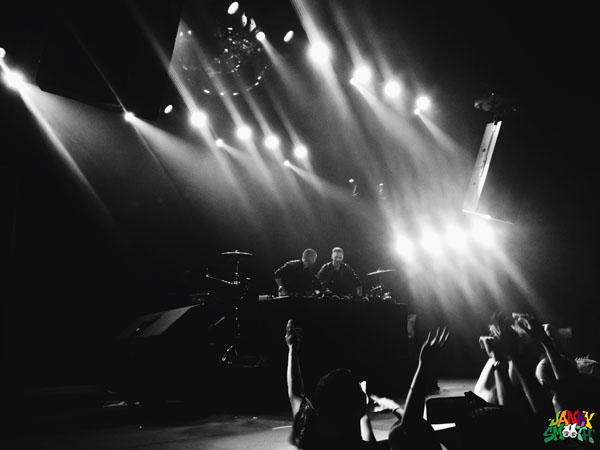 If you caught Galantis at any point this year, you’re one of the lucky ones.  I say this because they’re going from small clubs to the main stage at festivals – and fast. This Swedish duo is refreshingly far from a House Mafia and there is no stopping their momentum right now.. The happy spin they put on heavy house music can do no wrong and has been featured in sets by everyone from Diplo to Pete Tong. Christian Karlsson (of Miike Snow) and Linus Eklöw (aka Style of Eye), who make up Galantis, punched some serious life into everyone attending at The Mayan last night.

We arrived at The Mayan as Germany’s Booka Shade was wrapping their set. Steady house music with live elements, never a bad way to set the mood. After a short intermission to swap out the live setups, the anxious crowd was buzzing with energy. The #seafoxNATION (their fanbase) was alive and well – most of the crowd donned the paper Seafox (their brilliantly branded mascot) masks that Galantis had brought with them to gift to their fans. The headliners met the stage as an enthusiastic crowd welcomed them.

The opening track was a clear acapella of their track ‘Smile’ – which the entire crowd seemed to know the words to. One of the signature Galantis sounds combines male and female vocals, right on top of each other, and it’s impossible to not sing along. They adjusted the sounds with an array of analog equipment and got the beat started on their dual upright drum kits. The anthem broke into the full mix and the room erupted in energy.

They galloped through a solid repertoire of their fresh self-titled EP, which everyone loved, but met some tracks with smart selections from other artists. They sampled the timeless “Animal” by Miike Snow, captivated everyone with Fatboy Slim’s “Praise You”, and hit home with their mix of Alex Metric’s “Heart Weighs A Ton”, among other current electronic staples. The set never lost energy and everyone in attendance was genuinely happy to be there. It should be noted that they packed out the Mayan after a weekend back-to-back festival appearances, too! They were well received at Life Is Beautiful in Las Vegas, as well as HARD Day Of The Dead in Pomona during Halloween weekend.

DJ’s that catch on this fast do it for a reason – their music is rock solid. Not only has their music been featured in sets worldwide, it has also been remixed by some of the best (Tiesto, Kaskade, Brillz and many others). It initially seemed a bit redundant, but they played out remixes of original songs they’d previously played in the set. At first the crowd was confused, but as soon as a differently tailored drop to one of their originals would set in, the room would keep moving as furiously as before. During the Kaskade remix of their newest single “Runaway (U & I)” – the American progressive house legend himself appeared on stage to support his friends. Galantis and Kaskade led the crowd as they shouted, screamed and sung along to the the chorus. The energy was electric and it seemed the entire room smiled together. The set was seamless and everyone left with a grin. It left you longing for more, but not in a bad way like some DJ performances go – they didn’t just flip an off switch, they said goodbye and helped everyone fade back into reality with a brief encore featuring their single “You”.

It’s not often that I get genuinely excited for a DJ act in Los Angeles, they happen every night out here. But I had looked forward to this show since it’s announcement and they most definitely met the hype. I know these guys are only going to go up and up in their careers and I can’t wait to hear what they put out next. Check out the #SeafoxNation in action as soon as you can.