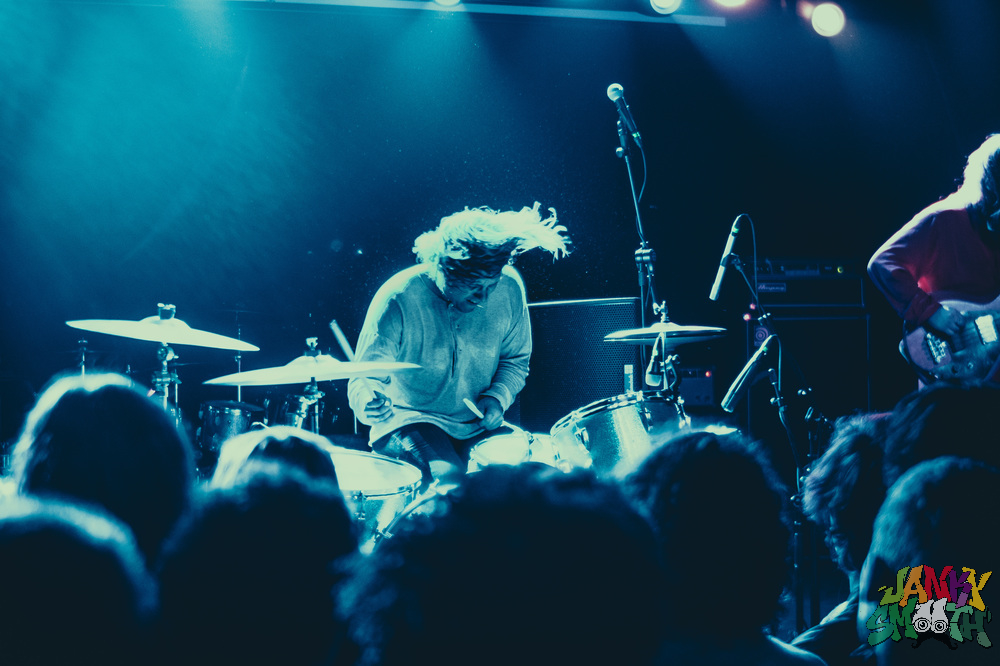 Moments before John Dwyer and Thee Oh Sees took the stage at The Teragram Ballroom for the Holiday Homeless Charity Event, L.A. Kitchen chief, Robert Egger exclaimed, “If you have something bad to say about L.A. then Fuck You!” This sentence was the punctuation to the announcement of how much money was raised by the two day benefit show that was organized by west coast tour booking behemoth, Panache Booking, in conjunction with Thee Oh Sees. It’s almost as if Egger was making a public reply to a private conversation with someone involved with the show. Seeing as both Segall and Dwyer are Bay Area transplants, it wouldn’t surprise me. No one is harder on Los Angeles than NorCal hipsters. After all, outsiders and Johnny Come Lately’s aren’t allowed to criticize our complex city and all it’s nuance and eccentricities. Only those who are born and raised in the city of dream chasing and head fucking can legitimately disseminate it’s many strengths and weaknesses. Most attendees didn’t give a shit about the plotlines anyway. They were just happy to see Ty Segall’s band, Fuzz and up and comers Wand on the bill alongside Dwyer and his king of indie bands, Thee Oh Sees. Throughout Thee Oh Sees set, John Dwyer took numerous pauses featuring uncomfortable silences in the space where youthful exuberance usually resides. I have been accused of reading too much into things in the past but seemed to be a response to Egger’s remarks when Dwyer would look incredulously at the audience after only a mild smattering of applause and whooping, quietly drawing from a water bottle and occasionally tuning a guitar string that was banged out of tune by wild strumming. Fuzz at The Teragram Ballroom shot by Johnny Ramos

It seemed though, that a majority of attendees at the Holiday Homeless Charity Event came to see Ty Segall side project turned band of the year, Fuzz. We covered Fuzz shows twice this year but for whatever reason, I was unable to attend personally. I fell in love with their album Fuzz II but incredibly, this was going to be my first time seeing them live. After the show, I stood there dazed, vowing never to miss them play a gig in town again. With all his talents, drumming might be Segall’s greatest one. Meatbodies front man and Fuzz bassist, Chad Ubovich channeled Geezer Butler with his fat bass tone, flying hair and most importantly, locked in, low end littering of notes that fit perfectly on, in between and all around the rhythms being stylistically hammered out by Segall. Lead guitarist, Charles Moothart and his triumphant tone tickled out guitar licks from the neck of his axe. Altogether, Fuzz delivered one of the most face melting performances that I have seen all year. The Sabbath sound is undeniable but yet, more technical.

The band Wand was the first opener. Air tight, heavy, melodic, groovy, relevant and original. Lead singer, Cory Hanson has a unique and powerful voice and Wand’s album Golem deservedly made most indie music publications’ top 10 lists. We expect big things from this band in the future.

The Holiday Homeless Charity event was a trifecta of contemporary rock music. Call it psych, stoner, hard rock or any derivative thereof with one constant- Rock and fucking roll. Michelle Cable over at Panache Booking is a highly respected and prolific collaborator in the indie music scene that is recognized as such all around the country and really, the world. She redrew the maps that bands use to tour the country and helped put this once fledgling music scene into the mainstream consciousness. It is fitting that this event she planned out with Dwyer was one of the last great shows to attend before the end of the year.  It was a punctuation on what the future holds and a statement that rock and roll can still change the world for the better.

No Barrier Between Thee Oh Sees and Audience at Human Resources