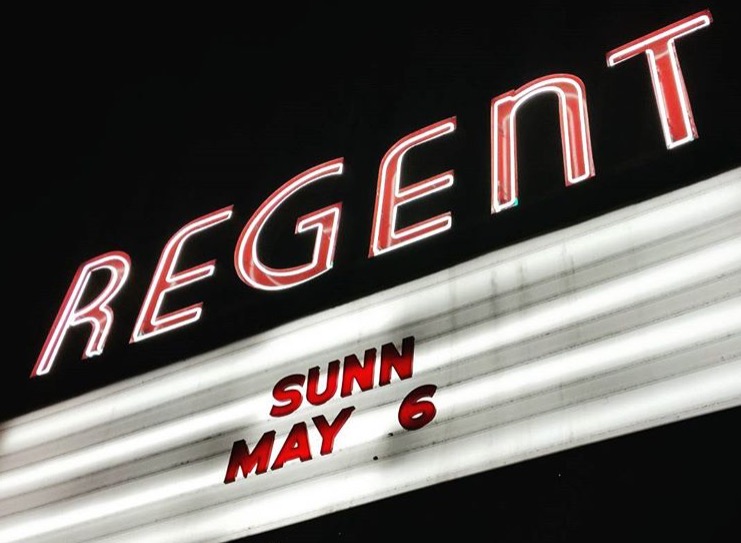 What is the loudest band in rock? Manowar earned the title in the Guinness book of world records but before that there was a consensus among rockers that Ministry was king of the hill. AC/DC’s own Brian Johnson is in danger of going deaf. My Bloody Valentine played so loud at Coachella 2014 that it drowned out Public Enemy’s set even at P.E.’s stage. Godflesh’s Justin Broderick said in an interview that they once played at 8000 watts making one audience member go deaf and a couple of women orgasm. Every band I just mentioned would have a tribute in volume’s Valhalla but Seattle’s avante garde Sunn o))) would be playing over the loud speakers.

I heard a lot about Sunn O))) before I ever listened to their music. Mostly “Dude, you got to see these guys live!”, I heard their concerts described as immersive musical experiences where audiences are surrounded by so much fog that you can’t see your own hand in front of your face.

Listening to their latest release Kannon, I feel like the band is trying to capture the darkest tones of nature or maybe translate gravity into music. I hear riffs that seem strummed by the hand of an angry god and vocal growls that predate language. This is the seventh circle of hell’s elevator music.

It was supposed to rain this night and though it didn’t, the bands inside the Regent that night channeled rolling thunder.

Hissing opened with their three piece doom and death metal barrage that was composed of riffs that feel like quicksand and minimalist death metal growls. Big Brave was next, another three piece with doom metal riffs, plenty of feedback, minimalist war drumming, and clean, bluesy vocals.

The kind of audience Sunn O))) attracted were metal heads of the black metal and stoner metal varieties as well as gnarly mother fuckers who were scenes onto themselves, those who the outsiders have rejected. I looked over the crowd and beheld a sea of black clothes and bobbing heads.

As Sunn O))) was preparing to go on stage the fog machines started filling the room with a thick haze that hid the stage. The house lights would paint the entire room and saturate the fog to the point that it felt like you were inside a post modern painting of a single color. Then every time the color changed it was like the Regent transported us into another “zone”.

Four members of the band dressed in cult robes appeared on stage, two guitarists and two guys on synths. They appeared like vague impressions of people behind the wall of fog. Their assault on our ear drums was so heavy that the sound didn’t just carry weight but also heat. It made my clothes vibrate against my skin. Twenty minutes into the music, the wall of fog broke as vocalist Stephen O’ Malley took the microphone. His singing consisted of groans, growls, shrills, and shrieks.

The show felt like a Pythagorean cult ritual in ancient Greece and like any ritual, the show had a structure. Rather than having a set of songs it was one long invocation with no pause from start to finish. It made me think about how our internal rhythms feel out what sound comes next when we hear a concert of songs we’re familiar with but when you can’t predict the music, you just submit yourself to it and suspend all expectation.

At one point O’Malley left the stage to let his band mates continue serving up their heaping glass of droning death jambrosia and when he returned he was no longer in a cult robe but in some kind of knight costume with jagged metallic shards all over that would reflect beams of light and a spiked sun helm on his head. This was a metaphor for transformation from worshipper to god, the god of the dying sun or of black holes. With every crazy movie I’ve ever seen, I had no image to compare this costume to. It felt totally original. O’Malley danced around until falling to his knees, crushed by the sound of his band and like a collapsing black hole, all music ceased and the band finished to a deafening applause. I walked out hearing people commiserate that the show was “Just TOO loud”. I was satisfied knowing I won’t ever see anything like that again until the next time the Sunn O))) rises in L.A. I know it was true art because I still can’t stop trying to figure it out.