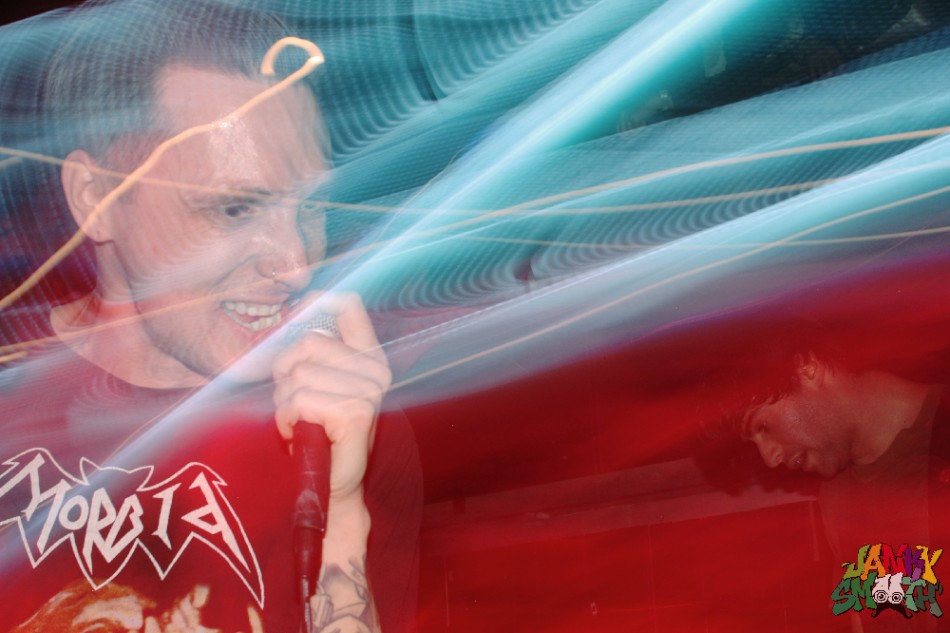 Tucked away amongst a row of small businesses and street vendors, the massive, multiple roomed venue called UNION is actually pretty easy to miss if you’re not looking for it. Even the marquee is unassuming amidst the flashing lights of the Pico-Union storefronts along the boulevard. Bright neon signs indicate that the Jewel Room awaits just past the side entrance and patio, still wet from the last few days of rain- a more perfectly planned setting for Black Marble and UNIFORM seemed impossible to imagine.

Janky Smooth listed UNIFORM as a top 25 band to watch in 2017 so I believe it was the reason my request to cover this show was approved but I was most excited to cover Black Marble, a band that couldn’t sound ANY more different than UNIFORM.  This should be interesting! 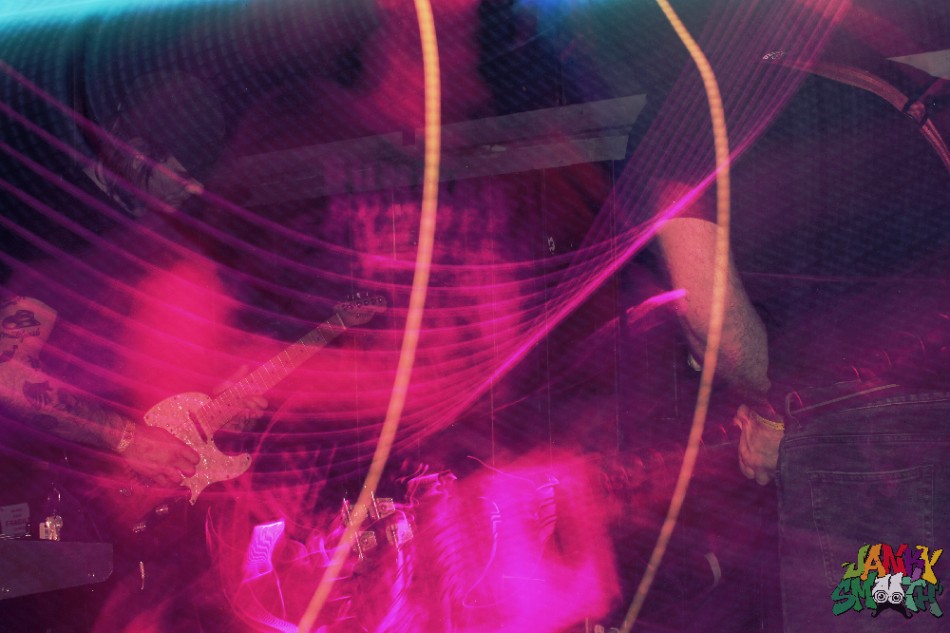 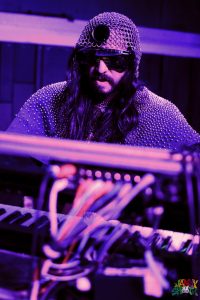 Inside UNION, the stage is illuminated in light teal as the first act takes the stage. Anzano is a one-man act consisting of heavily distorted vocals, pre-recorded or triggered synth tracks and a giant flying-V shaped guitar that goes relatively ignored, save for a few sparse riffs. To compensate for the seeming limited musicality, Anzano is dressed in a sequin cape, chain mail cap with wrap-around glasses and a collection of heavy amulets around his neck. He fiddles with the knobs on the soundboard and mumbles indiscernible lyrics into the microphone before abruptly ending the first song to reveal the audience talking loudly over his set. After about five minutes of humming audience sounds while Anzano tinkered with his sound equipment, the second song started as abruptly as the first had finished. With the exception of a few chords and riffs, Anzano let the guitar dangle uselessly around his neck for most of the performance. With too much repetition and not enough musical contribution from the artist himself, this first performance felt more like a DJ set than anything else. 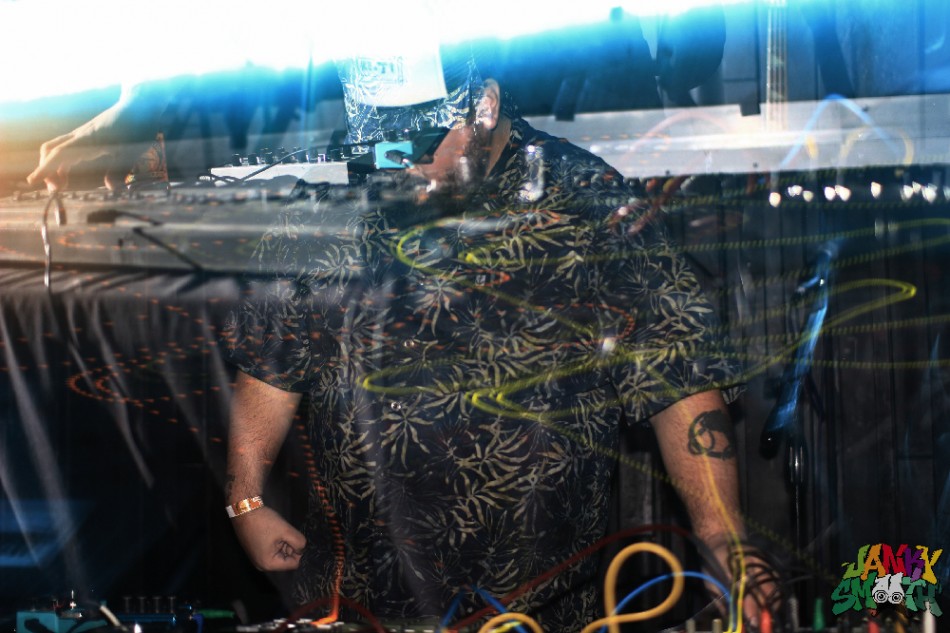 For my money, the genre known as Noise doesn’t always translate well into live performance, but noise artist Hive Mind played a set that almost convinced me otherwise. The name of the genre is self-explanatory and the standard components of musical composition and is punctuated by disjointed sounds with no lyrics, rhythm or distinguishable melody in exchange for exploration into musical experimentation.  Hive Mind utilizes a metallic-sounding style with clanking and banging sounds occasionally perforating the silky but vacuous bass. The sounds would convene to form a discerning rhythm before falling out of sync again, leaving the listeners again lost in abstract sounds. In terms of a noise performance, Hive Mind is well on the tolerable end of the spectrum. His style is interesting and it seems like there is a deeper underlying message to what he creates on his soundboard. 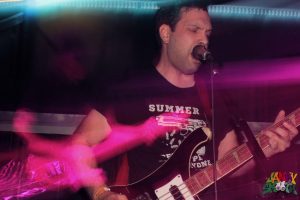 Black Marble is a notable example of how 80’s new wave, goth and synth pop have survived the test of time. It isn’t surprising that a significant number of attendees are wearing Joy Division shirts, as the style of Black Marble pays homage to early pioneers such as Ian Curtis. Their stage presence at UNION was almost dream-like as they were bathed in purple light against that teal backdrop. Frontman Chris Stewart invokes a melancholic intimacy between himself and the audience and in return receives admiration from the audience. Despite Stewart gesturing to the soundbooth to elevate the vocal levels, his voice was swallowed by the instrumentals for the first part of the set. Black Marble gives an emotional performance, playing some familiar songs as well as many from the 2016 release, It’s Immaterial. The duo creates an enormous sound for how limited their setup seems to be and delivers a dynamic and heartfelt performance. 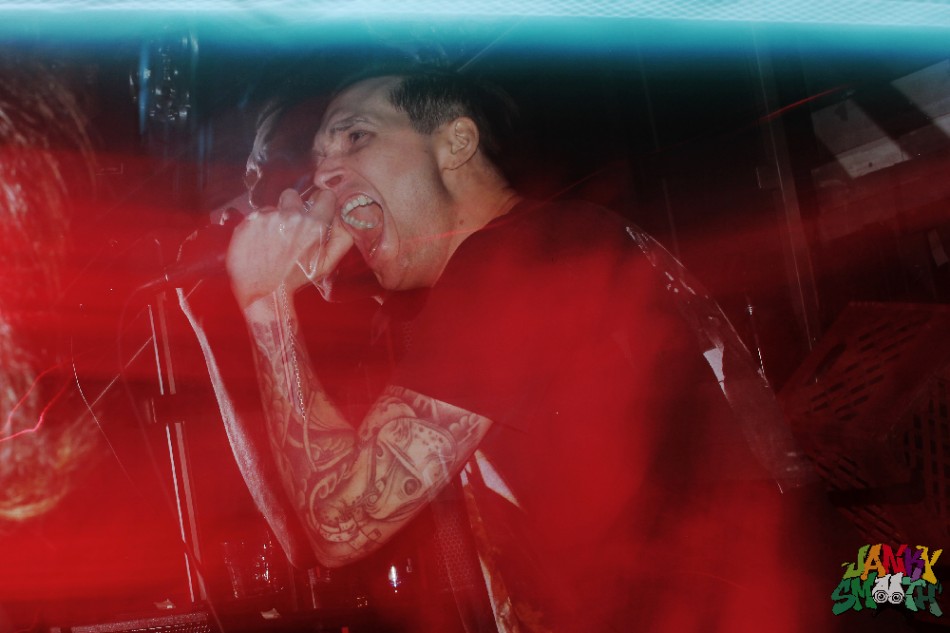 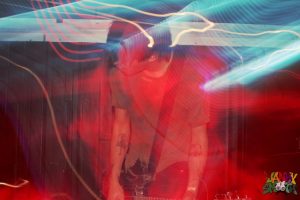 Raucous and unruly, UNIFORM is a rock duo from New York and one of Janky’s favorite labels, Sacred Bones. The mixer onstage is incased in a black traveling trunk atop a stand. They play noisy hardcore music with an industrial vibe, relying heavily on the on stage mixing board and the clear plastic electric guitar Ben Greenberg shreds from the back corner of the stage. Vocalist Michael Berdan screams over the double-bass percussion track and accompaniment. Given the style and sound, the performance feels like it was intended as a trio but choose to go without a drummer. The venue itself barely allows for stage diving but Berdan dove onto the outstretched arms of the thinning crowd and an audience member took the mic from his hands to finish the song as Berdan was carried above the heads of a few spectators.  Their sound is pure anguish and rage, raw with vocals buried just underneath the high mids of the guitar tone and rhythm of the programmed drums.  Although UNIFORM delivers an intense performance, the style was so vastly different from that of the other artists on the bill and it felt like they went completely under-appreciated by the Black Marble crowd. 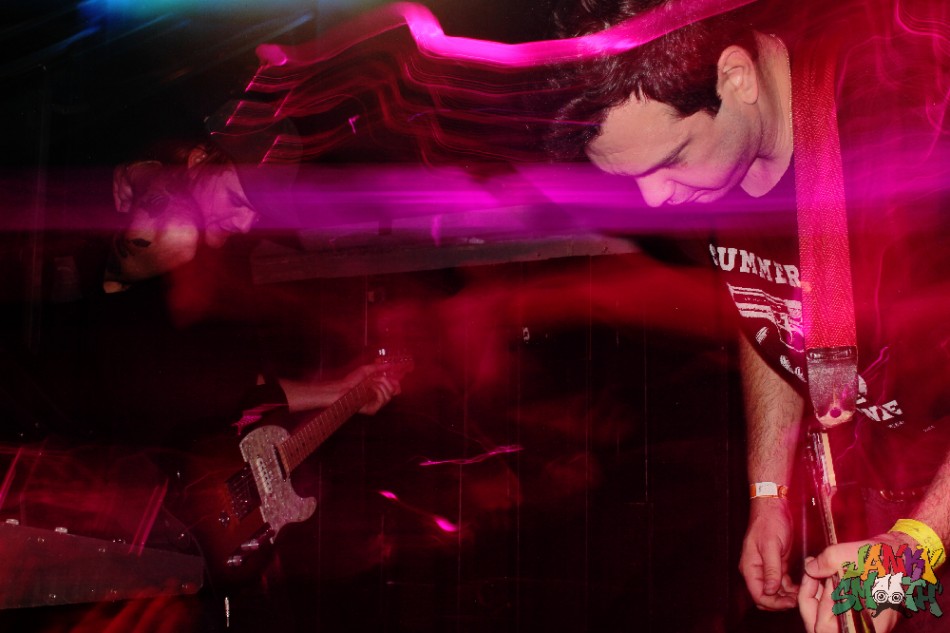 There was little cohesiveness between the genres booked for this specific event but that isn’t abnormal at all with the way genre has become like gender in America amongst musical progressives. It was evident that certain audiences came for certain acts but had little to no interest in the other artists which yielded sparse crowds.  The four acts were all vastly different styles and thus the audience seemed divided and many were inclined to leave the stage area during acts they didn’t come to see. Nonetheless, the evening concluded with the audience buzzing excitedly in a “mission accomplished” for the bookers at Union who seem to be onto something with this nebulous lack of dogma or allegiance to anything but acts that have a great individual style of music, independent of genre. 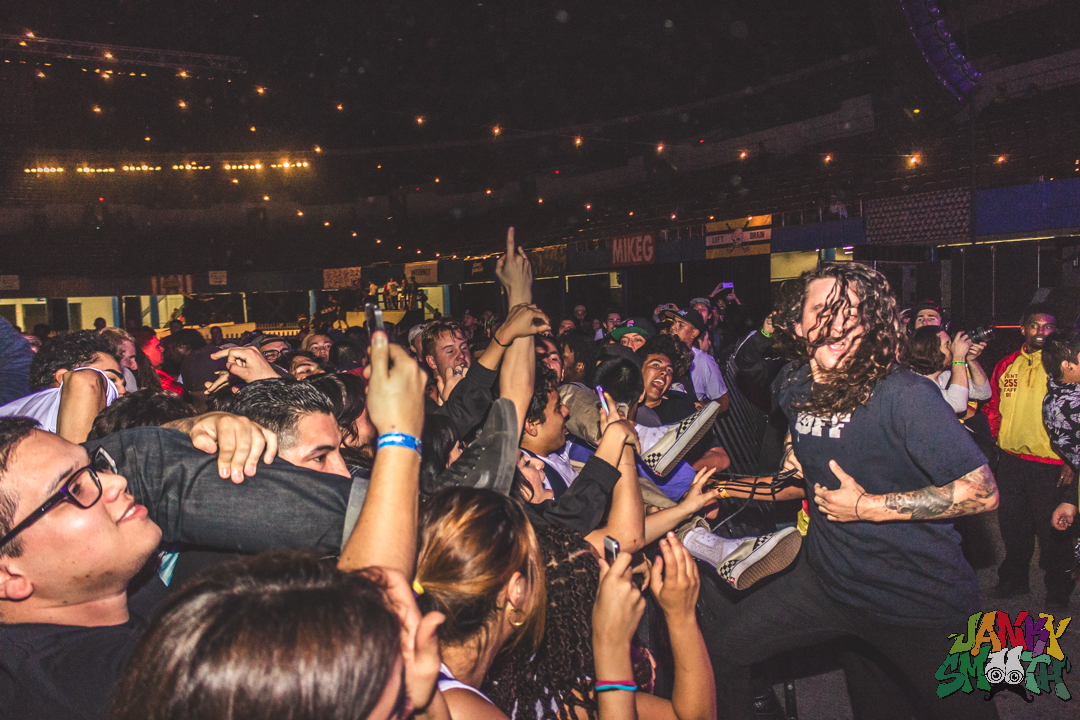 Bands like Trash Talk have perfected the creation of mongrel-esque lineups that mix hardcore with underground rap, a theme that has been present since the band’s inception and rise with Odd Future Records.  And it goes both ways if you’ve ever gone to the Camp Flog Gnaw festival, the festival moniker of Odd Future visionary, Tyler, the Creator.

UNION hosted Nature World Night Out this past Saturday, February 25th.  It was a successful example of the mongrelization of genres that no longer requires kids to pledge allegiance to a style of music, forsaking all others and doing away with that oldest curse of being branded “not punk enough”, the now retired scarlet letter of young fanboys of pop music past..

related content: A Free Show w/ Lil B, Trash Talk and Ho99o9… What Could Go Wrong?