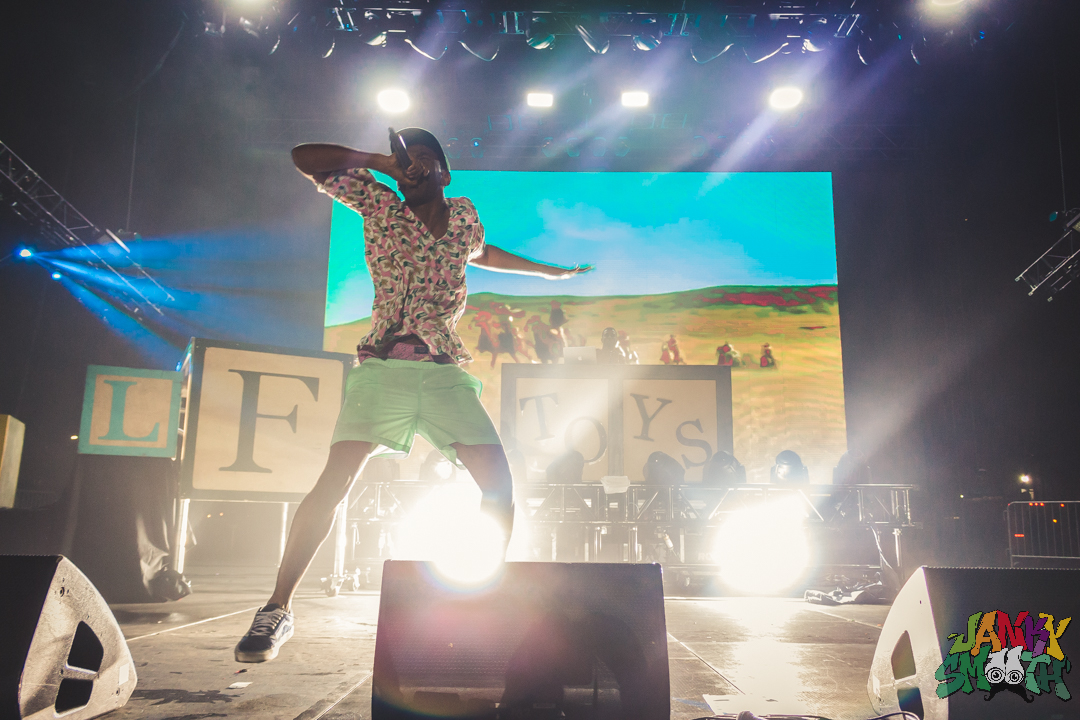 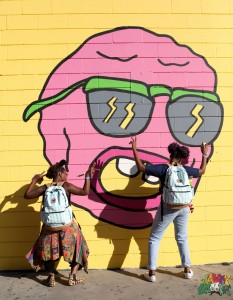 As I entered Exposition Park for the next annual installment of Camp Flog Gnaw, I was consumed by visions of khaki’s and polo shirts. Many attendees resembled prep school students more than the stereotypical image of hip hop fans. There was very little evidence of “hip hop past” and it’s baggy clothing, ironed creases and crisp snap backs. Rapper, producer and entrepreneur Tyler, The Creator continues to create the entire Camp Flog Gnaw world in his own image, with a tireless output and an ever evolving sound and aesthetic, fans are buying in; big time. But to say that it’s “all about the music” would be disingenuous. If the contemporary artists’ financial success were solely based on their music then Tyler wouldn’t be such a standout powerhouse (being the best isn’t enough). With streaming music services and P2P sites making album sales almost irrelevant, acts like Tyler, the Creator and indie bands like The Growlers with their “Beach Goth” festivals are at the forefront of building the new music industry. No, even with artists like Snoop, Atmosphere and Living Legends on the bill, this festival was not about the past. This festival was not about the future. This festival wasn’t even about an “odd future”, (to the dismay of Hodgy Beats). It’s about the here and now and Tyler is cashing in. 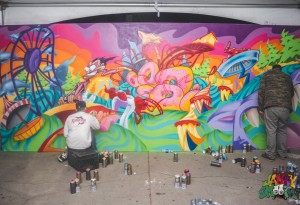 Bombing Walls at The Sports Arena by Illena Cardenas

Camp Flog Gnaw is not just a party or a carnival or a concert. Camp Flog Gnaw is a fucking money printing machine. To say it’s highly impressive that an independent minded artist like Tyler and his team have managed to make the leap from a bunch of kids in a home studio to legit businessmen contracting to lease out Exposition Park and the Sports Arena would be an understatement. The most extraordinary aspect of Tyler The Creator’s business minded approach is that building his brand hasn’t censored his controversial nature. He hasn’t made the mistake that many beloved independent artists have made which is refining himself into something that is easily digestible to the masses while alienating his most hardcore fans. But in the rise to success, you are bound to alienate some folks (and governments like the UK and Austrailia who have banned Tyler over lyrics from his Bastard album), and it seems like Tyler’s success has led to a huge rift developing between himself and many members of his OG squad- OFWGKTA. During the Odd Future set at Camp Flog Gnaw which featured a fractured version of the original group, Hodgy Beats threatened to kick the stage managers ass after the show, then he put Tyler on blast in front of the festival crowd about how fame has changed him and later continued beefing on Twitter and Instagram. Tyler hit back during his set and now it seems we have a full fledged hip hop beef developing right in front of our very eyes. I don’t know Tyler. I don’t know Hodgy. But it DOES seem a bit fucked that you can publicly throw so much shade at someone that orchestrated your success. Because with Golf Media, Camp Flog Gnaw and most importantly, the continued rise in popularity of his music, Tyler, The Creator and his vision are undoubtedly the reason for the meteoric rise of anyone associated with Odd Future. I have no clue how gracefully Tyler is handling his success. The general image Tyler portrays of “shit talker” must make it hard to work with him but it’s kind of a bitch move to play the show, put the money in your pocket and call him out in the middle of a set that Tyler paid you to play.

There were A LOT of highlights throughout Saturday’s Camp Flog Gnaw. Long Beach’s own, Vince Staples was a last minute addition to the bill and as he took the stage, the crowd was kind of light. By the last song, “Blue Suede”, the audience was full, frothy and bouncing and it was one of the main highlights of the daylight hours. 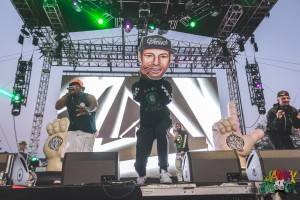 90’s underground hip hop powerhouse, Living Legends had one of my favorite sets of the day which included a surprise, not so surprising cameo by Murs, who left the group in 2012. Somehow, myself and a bunch of other folks, probably directly connected to the group, ended up on the stage with Living Legends with a cardboard cutout of Aesop covering my face for the first song.

Sandwiched between and during both the Living Legends and Danny Brown set was YG. Since both myself and photographer, Oscar Diaz were super hyped to see Danny Brown, we missed YG. Almost every artist from Tyler to Lee Spielman from hardcore band, Trash Talk mentioned how dope YG’s set was. Fuck. But Danny Brown was well worth it. It was hella vibey to have Danny Brown playing inside the sports arena while skaters laid it down on the street course that was built on the floor of the arena for Camp Flog Gnaw. Lit. 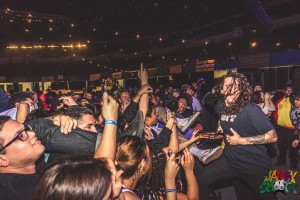 Speaking of Trash Talk, Lee Spielman was in prime form, as always, teaching kids who love to “mosh” what a circle pit is. The floor of the “Gnaw” stage, located inside the confines of the L.A. Sports arena, exploded into a swirling, human mass of young aggression. Spielman was on stage for a total of 30 seconds, spending most of his time near the barricade, shoving his face and the mic into the faces of fans who were uncomfortably shoved up against the wall that separates the fans from the stage. He continuously kept urging fans to jump the wall to come up on stage and stage dive while he was in the face of security, asking them to kick rocks on numerous occasions because they were not needed or wanted there. As usual, photographers in the photo pit were at risk of bodily harm and damage to their camera. Janky photographer, Oscar Diaz, who was shooting the show with a hand that was broken only a few days earlier, was one of the victims of Spielman and his complete disregard of bodily injury. As a fan, I love that shit. Oscar wasn’t stoked, “Fuck that guy”. I love that a real, hardcore thrash band is a part of the Wolf Gang and that hip hop heads can get down to Willow Smith and Trash Talk in the same day.  By the middle of the set, Spielman ended up over the barrier, on the floor, sitting all the fans on the floor of the sports arena down like a master of Simon Says before giving the cue for all to explode to their feet at the pinnacle of the song.  It was intense.

I left Trash Talk a bit early to go catch Domo, Hodgy, Left Brain and Mike G do their OFWGKTA thang. Most of the set fell a bit flat and there was low energy from the stage until Hodgy went on his rant calling the Odd Future captain a fraud as Tyler watched from the side of the stage, with his set on the main stage not long after that moment. It was fucking weird. Hodgy must have been high as fuck to go there at that particular moment. Even though Domo broke off something proper, the highlight of the set was the drama and tension Hodgy Beats created. I bounced early to check out Atmosphere on the mainstage. 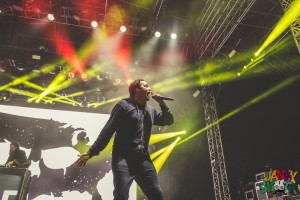 Another memorable moment at Camp Flog Gnaw 2015 was Atmosphere’s set. I love the respect that Slug continues to enjoy amongst hip hop heads and it’s well deserved. I bowed my head and closed my eyes during “Guns and Cigarettes” as the audience was well versed enough to recite the lyrics back at the well respected, hip hop icon before Tyler and crew took the stage next.

Tyler dropped a pound of blood on stage at Camp Flog Gnaw 2015. There wasn’t a performer that day that came with more energy than the man who put this show together. He played a good mix of old tracks and new and spit so hard that he blew out his voice, half way through the set. That didn’t stop him from pressing on and pushing out sounds from his strained vocal chords. He made mention of shade that Hodgy Beats threw at him during the makeshift, Odd Future set earlier in the evening. 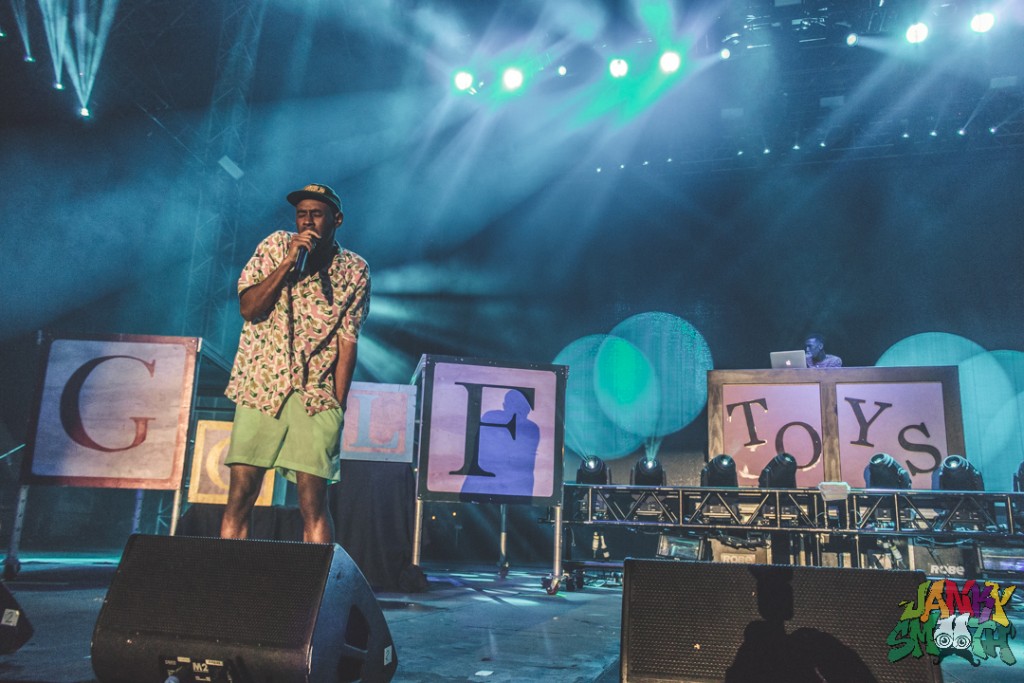 “Niggas got me fucked up. I put too many niggas on. I helped too many of my motherfucking friends out. And niggas gonna come foul? And you know who the fuck I’m talking about, nigga. And yes, it’s getting real. I love you though.”

Hodgy continued his shit talk on Twitter and IG up until yesterday until it was announced that the two had made up, shortly after all the drama. It shows incredible maturity by Tyler to let it go, even though through his public persona, maturity doesn’t seem to be his most highlighted trait.

Tyler brought Schoolboy Q out during “The Brown Stains of Darkeese Latifah Part 6-12 (Remix)”. At the end of the song, Tyler thanked SQ and expressed his love for his “chubby friend” and finished his set like a G. I was half hoping to see Earl of Franky O come out but deep down inside, I knew that wasn’t going to happen. 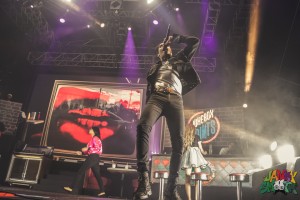 Then it was on to A$AP Rocky on another stage. In the handful of times I’ve seen him live, it was hit or miss on the level of energy Rocky brought to his show. At Camp Flog Gnaw, I think he knew he needed to bring the heat and he did. French Montana and Diddy came out for guest spots during his set and the audience hung on every word and lyric that were delivered like he meant it.

Finally, it was time for the biggest mainstream draw at the festival- Snoop and the Dogg Pound. It was good to see Snoop come out on time since the last couple times I’ve seen him, he’s been at least 20 minutes late. Snoop broke off a proper set but I had already checked out. I was drunk and tired and ready to go home before he took the stage but I couldn’t go out like that and I fought through to the finish.

Unfortunately, In the here and now of the business of music, it is important to create your “brand”. With the large appetite for touring bands across the world, it’s easier than ever to make money by making original music. Making A LOT of money is just as difficult as it’s ever been, though. Tyler has created a brand that is both controversial but accepted amongst his fans, a young demographic that typically shuns any type of racism, sexism or homophobia and gives Tyler a pass on his lyrics that other comedians, artists and musicians don’t get. After attending Camp Flog Gnaw this past weekend, I’m always happy to be reminded about how much good, new music is out there for us all. There will always be good, new music. No matter what the middle aged, middle wage, ex scenester says about things being different then when he was a kid. I hear it all the time from people over 30, “Hip hop ain’t what it used to be”. Aside from the fashion, I don’t think hip hop has changed that much and all you have to do to find it is have an open mind and an internet connection. It’s there that you can check out Soundclouds, Band Camps and don’t forget to download the Golf Media app.