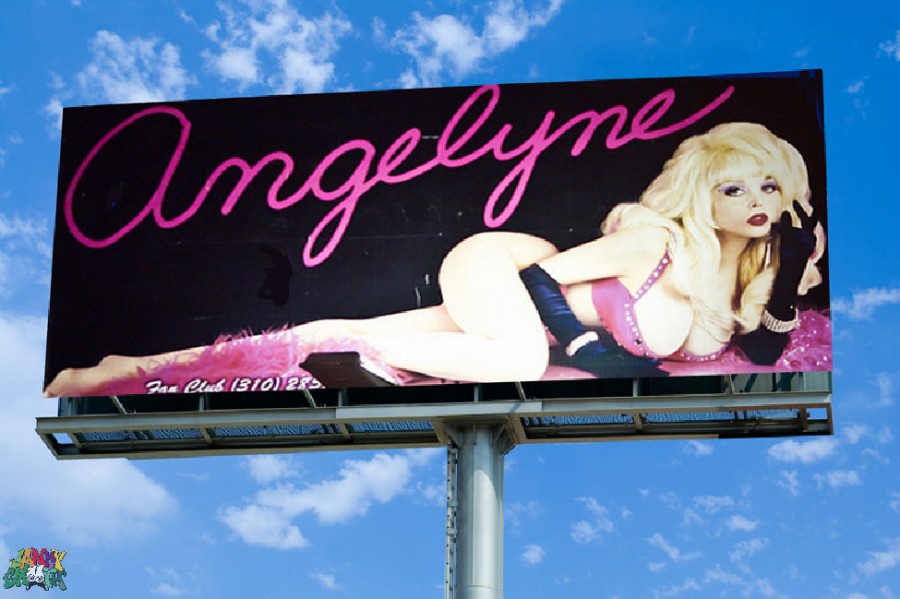 One great thing about living in Southern California is that seemingly everyone you meet is here with specific creative goals in mind- that experience MAY be magnified if you yourself have your own dreams of creative success or recognition since, obviously there are MILLIONS of people who live here that are just living their lives everyday just like any other city in the world.  All things being equal, you may randomly end up befriending a transplant swedish waitress, only to find out she’s actually a screenwriter or even end up becoming friends with a famous local on any given day or night of the week.  It’s part of the LA charm that I have come to love so much. I recently met billboard queen, Angelyne through a friend when I was invited to join them for dinner at El Coyote. Like many, she was instantly recognizable to me, even though I didn’t know much about her. But after meeting her, I was compelled to find out as much as I could.

Over the course of the last month or so I have been able to get to know her more though our conversations.

What I have learned has given me a greater understanding of the phenomenon that’s called, Angelyne… 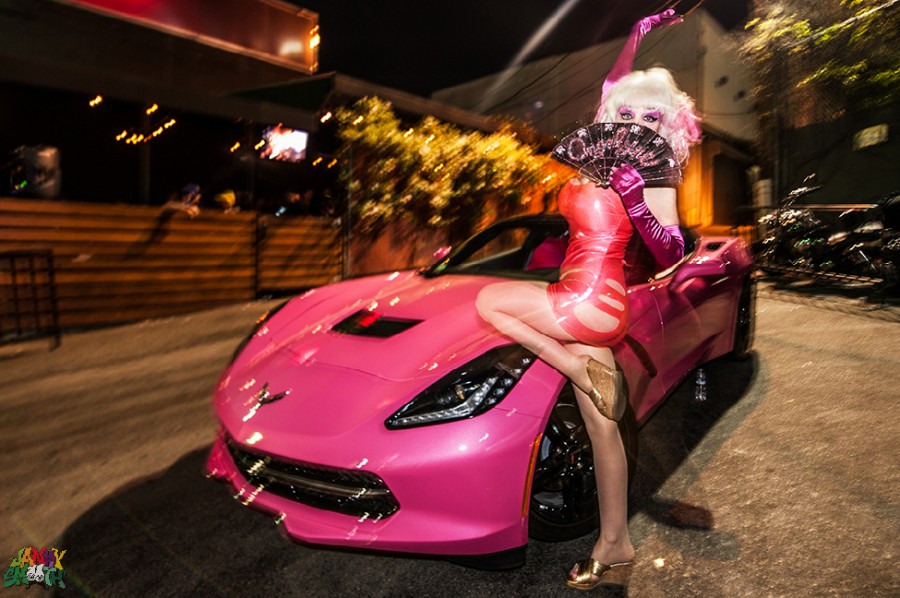 Angelyne at Sex Cells- The Echoplex

Whether you live in Los Angeles or abroad, chances are that Angelyne’s image has made its way into your psyche. For over 25 years, her billboards were synonymous with LA’s star powered culture. At one point, this wild and mysterious LA ideogram had a run of both random or pre-meditated appearances in so many movies and T.V shows that you couldn’t prove a movie was truly shot in LA if there wasn’t a cameo from Angelyne herself, or shots that featured her billboards in the background.

You might think Angelyne is merely a sexy, Barbie-esque babe posing on a bright pink corvette but she is so much more than that.  She is the symbol of a dream that has incited a pilgrimage from millions all over the world who seek fame, fortune or even just  inspiration in this great city we call home- and Angelyne sought out all those things.

Angelyne took vocal lessons as a child, and while she had an operatic voice, this little “Rock N Roll Rebel” wasn’t interested in singing opera. 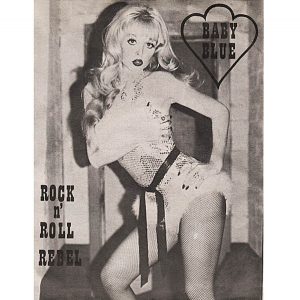 Upon moving to LA, Angelyne met Jordan Michaels. Michaels instantly recognized the star power she commanded between her looks and unique vocal style. The band, Black And Blue was formed then renamed Baby Blue shortly after it’s inception and songs like “Rock N Roll Rebel” and “Fantasy Man” were born and released as an EP in 1978.  Her sexy kewpie doll voice paired with raw punk riffs spawned a uniquely glamorous yet gritty punk sound.

Baby Blue was a perfect embodiment of punk in this era, however, Angelyne brought an element to the group that set them apart as a unique entity all their own.

Angelyne proceeded to pursue a solo career into the 80’s and found sisterly love and respect amongst the ranks of other female musical greats such as Nina Hagen. Songs like “Kiss Me LA” and “My List” showcase the sexual nature of her femininity and the way she embraces her ability to garner men’s attention through their loins. 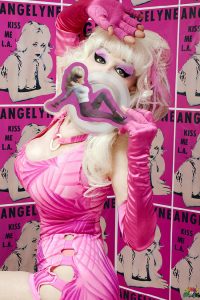 Angelyne’s larger than life image was originally used to promote her first band, but the billboard took on a life of its own because In 1983, these signs were erected all over LA. Nobody really knew what Angelyne did and her billboards remained a mystery for the most part, featuring only her image, name, and telephone number-  but the billboards seemed to be everywhere you looked.

Her plan worked, and she was launched into stardom as an unapologetic female sex icon. She quickly became the most recognized face in Hollywood, prompting countless appearances on television and in cinema, music videos, etc. Angelyne might have been the first person who became famous for being famous.  In 2015 she lamented in the Hollywood Reporter on phenomena like that of the Kardashians and Hiltons as being “boring” and “gauche” celebrity culture and noting part of her persona was built on the ability to “dole myself out carefully…” because “I don’t want people to overload.”  And this is evidenced by an impulse of hiding her face in public that has become an almost religious routine.

A fun fact, not to be glazed over- Angelyne garnered 2,533 votes as an independent candidate in the 2003 California gubernatorial recall election that elevated The Governator to top legislator in his political directorial debut in his role as chief executive of the Golden State. 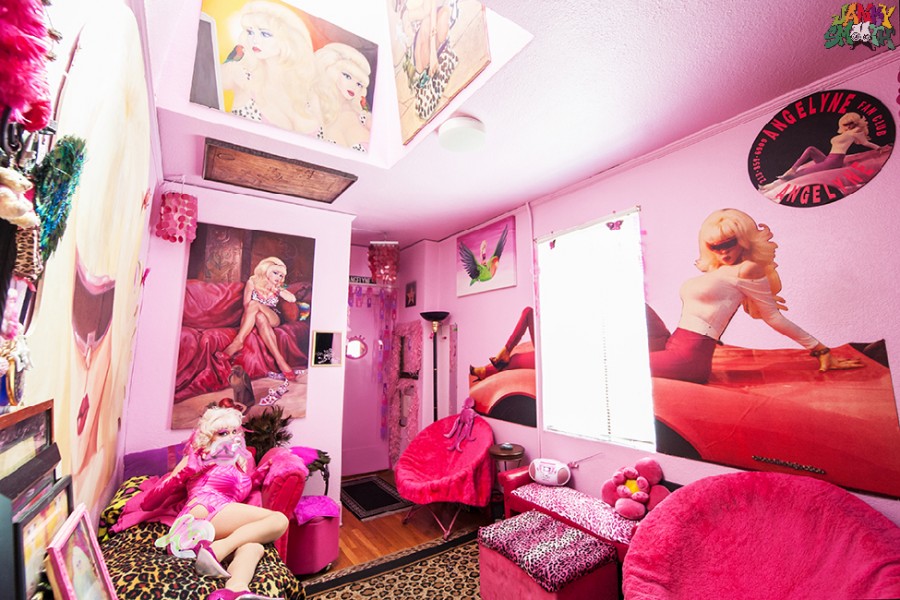 Beyond all that, Angelyne is an unadulterated pop culture queen that inspires others to be superstars in their own right.  Her empire consists of corvette pop-ups, music, billboards, painting, modeling, and food art.  Personally, it’s Angelyne’s aural lexicon is really what speaks to me the most. 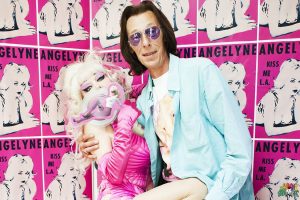 Like all icons, she has mini legions of those that are enamored and even dedicated to the image she has built from nothing and non moreso than Scott Hennig. Scott’s name appears in so many publications and various other formats that discuss the legacy of Angelyne as her “manager”, with the quotation marks present in almost every instance in which his name is mentioned.  He is the president of her fan club, literally and he has been there with her for many years now- official capacity or not.

Angelyne recently teamed up with Henrik Poulsen and NDN Records to produce her new (as she would describe it), “too hot for TV, bordering on X-rated” single titled “Heart.”

Her single was set to be released this month June 2016, according to multiple online sources but she confirmed for me that the new date is September- even though discogs shows “Heart” as already having been released.  I was fortunate enough to get a private listening. After hearing it, I am impressed at the way Angelyne manages to release good music that is relevant to what is current, without falling into any specific category or trend. “Heart” has the same sexy vixen attitude with a new, progressive heavy indie vibe.

In addition to recording new material, Angelyne has also low key released a super limited edition picture disc of her classic hit, “Kiss Me LA.”  The B-side includes a never before heard, spoken promo teaser titled, “Bubble Bath,” recorded at Big Arm Recordings. Without spoiling it, here’s a hint: it’s awesome and exactly what you might imagine given the title.

Angelyne’s “Kiss Me LA” picture disc is only available for purchase through Angelyne herself.  So if you’re a fan of Angelyne then it might be kind of cool to email her directly to order this special edition of a classic: [email protected]

It’s been 7 years since we’ve seen our beloved Angelyne billboards.

Fans are constantly asking her, “When will your billboards be back up?” her answer is simply, “You want them up, let’s put them up!” If you would like to make Los Angeles neon again, support here on IndieGoGo

Angelyne is close to having the first billboard re-erected.

As far as Los Angeles and being cemented into the short attention span and long list of L.A. icons, Angelyne no longer needs her billboards- her image is dialed in, she has already found the fame that she set out for and she knows exactly who she is.

The billboards are bigger than any one person, inextricably intertwined into the psyche of anyone that grew up in Los Angeles or spent significant amounts of time in this city and is over the age of 35. When I think of the resurrection of this fixture of the L.A. landscape, I think that something familiar in the ever changing and gentrifying frenzy that seems to be taking place in every major American city would do a lot to re-brand the city and the growing numbers of chain stores and restaurants that are strangling Los Angeles with a sanitized and monotonous mutiny of culture.

The goal here seems to be to use her image to elevate the city’s consciousness as a whole and send inspiration to the people of Los Angeles to be the walking pieces of art that are.

Over the years LA has undoubtedly become less of a magical place. The glitz, glamour and personality of what made LA culture so special is being lost to soul-less corporate cash machines. As such, the nostalgia of Angelyne’s billboards refuses to remain a remnant of LA’s glitzy past.

According to the enigmatic and unassuming diva herself, in order to pass on her spiritual inspiration to other people, Angelyne felt a drive to become famous. With that lofty goal achieved, she explained that her fame and the love for her fans fill a void in Angelyne’s heart that was left empty by the loss of her parents at a young age.

When I asked Angelyne if she had any messages for the Janky Smooth audience, she replied “If you are reading this now, then you are bringing good luck to me and to yourself!”