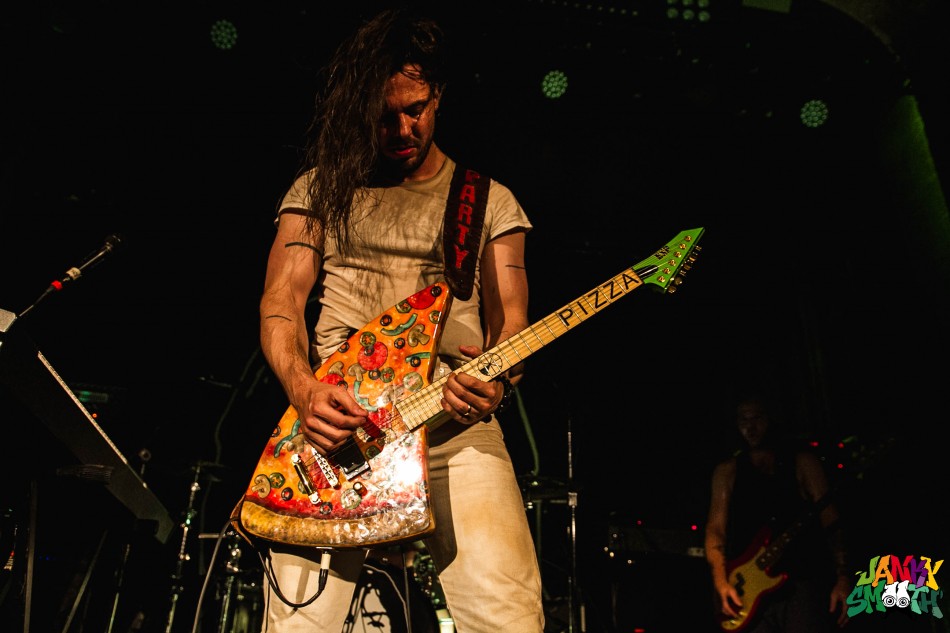 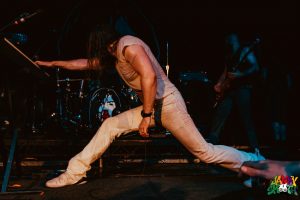 How can anyone not like Andrew WK? No matter what kind of music you’re into, if you go to his show, you will be moved to move, dance, shout, jump, and of course, party. That’s what AWK is a master of, getting everyone in a room on his side no matter who they are, why they’re there, or where they come from. If you’re not a fan, just give Andrew 5 minutes of your time and I’m sure you’ll see the light. 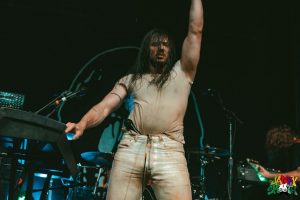 Like most people my age, I discovered Andrew WK from his collaboration with the Jackass crew, where the single “We Want Fun” was debuted with the original Jackass movie all the way back in 2002. Fifteen years later, the lasting power and stamina of Andrew WK’s chops and career are truly uncanny. His nose has been bleeding for twenty years and still, he shows no signs of aging or slowing down.

Mind over matter and music of mind, that is the answer. He practices the “party philosophy” in order to reach “party consciousness”. 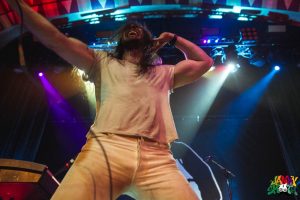 Andrew WK takes a minimalist approach to his iconic image (and probably his life too), wearing the same dirty white jeans and white shirt for his whole career. Getting an inside scoop on his rider from some homies at Spaceland, the guy doesn’t ask for much backstage either. No booze, no fancy food, nothing special. He arrives at the show sober and prepared to invoke joy in his audience then begins the show aptly on time.

At one point of his set, he preached a tenant of the party philosophy. That all strife and hardship in life are just tests… tests to see how hard you can party. Clearly, nothing plagues Andrew WK’s mind like so many other artists that don’t just sing about positive subjects and it shows, just look at his face, he hasn’t aged a day.

Stepping into the Regent, Jay Z and Rodrigo y Gabriela were playing over the loud speakers at party volume. I looked over at the merch table and saw every shirt and poster had the same famous headshot of AWK with blood gushing out of his nose. 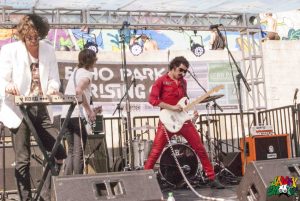 Josh Landau’s second band, Easy, began the night and set the tone for a night of real rock and roll flavor. It almost seems as though The Shrine has taken a total backseat to Easy as far LA shows go, which differs simply in the less metallic and motorheady feel of Easy. That’s no jab though, Easy still rocks my socks off. Josh shreds so hard he could carry any group. So powerful was their performance that I couldn’t help but think these guys might be the last hope of pure rock and roll. I also took notice of Don Nguyen on the bass, wondering what kind of chops the pro skater had. He definitely killed it with the rest of the band, climaxing during the band’s closer, a cover of The Stooges “I Wanna Be Your Dog“. Josh shredded hard on the guitar during the song, going down to the audience to play and winning the hearts of many new fans.

Next was the San Fernando Valley’s own, Prima Donna, a band that has toured the world with Greenday, in fact the band’s singer Kevin Preston is in Billy Joe Armstrong’s side-project Foxboro Hot Tubs. Every valley rocker has to know these guys by now. Like Easy, they were a pure rock and roll force with keyboards brining an original flavor of glam and haunted garage into the mix. The band’s image and sound veers near the rockabilly genre but doesn’t quite dive into the waters. The band’s swagger cannot be denied but still, as a punk with a need for speed and aggression, it couldn’t keep my attention. Rock and roll about chicks has never quite interested me as much as rock about violence, anger, death, politics, and social decay… I guess I just got to find a girl as twisted as me. 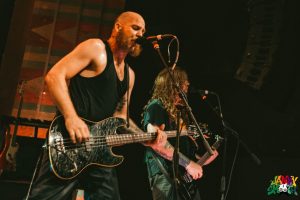 Andrew WK started playing classical piano at the age of 4 and after conquering the world of classical music in academia he played in bands spanning genres such as punk, metal, and even noise. So, to come out the other side of all those styles as an all American party rocker is not the outcome I would’ve expected. Seeing him on stage head banging and singing and slamming his fingers on his keyboard while his band of three guitarists, bassist, keyboardist, and drummer jammed out, was like seeing a crazy hybrid of Cheap Trick, Grand Funk Railroad, Butthole Surfers, and even a pinch of Weird Al Yankovic. The Weird Al part comes in with Andrew’s total command and understanding of stage presence and movement as a means of delivering satire and comedy. The music is great but he knows he shouldn’t be taken totally serious. 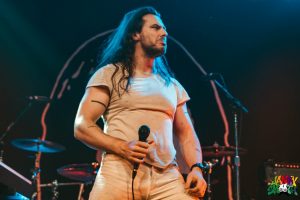 The bigger hits like “She is Beautiful“, “We Want Fun” and his closer “Party Hard” packed an insane amount of punch, making the audience go completely ape-shit, crowd surfing and getting on stage to grab at Andrew, play his keyboard, then return to the sea of partying masses. Every song is an anthem when you adopt the party philosophy, people knew all the words and felt that certain rhythm that makes you stand at attention.

The two most special moment of the concert were first when he took out his pizza guitar to solo into “She is Beautiful” then during the encore where at the fourth and final song, Andrew counted down with the audience all the way from 100, making the Regent reach a fever pitch by the time the countdown reached 10, then finally at 1, the band went into “Party Hard” and everyone went completely nuts. Overall, I don’t think I’ve seen the Regent get so wrapped up in jubilance as it it did with Andrew WK every song was like an event to these rabid fans and at no point during the show did the weight of reality’s crushing despair touch anyone’s mind.

There may not be the most complexity and nuance and meaning behind Andrew WK’s songs but with all the bull shit we all have to deal with on a daily basis, one has to take the time to see the deeper meaning behind the act of letting go and giving yourself up to a good time. When we return to the real world where the party does actually end and happiness only comes in doses then part of you has to envy Andrew WK’s party consciousness. Perhaps if you too can adhere to the party philosophy then maybe for you, like Andrew, the party will never end. 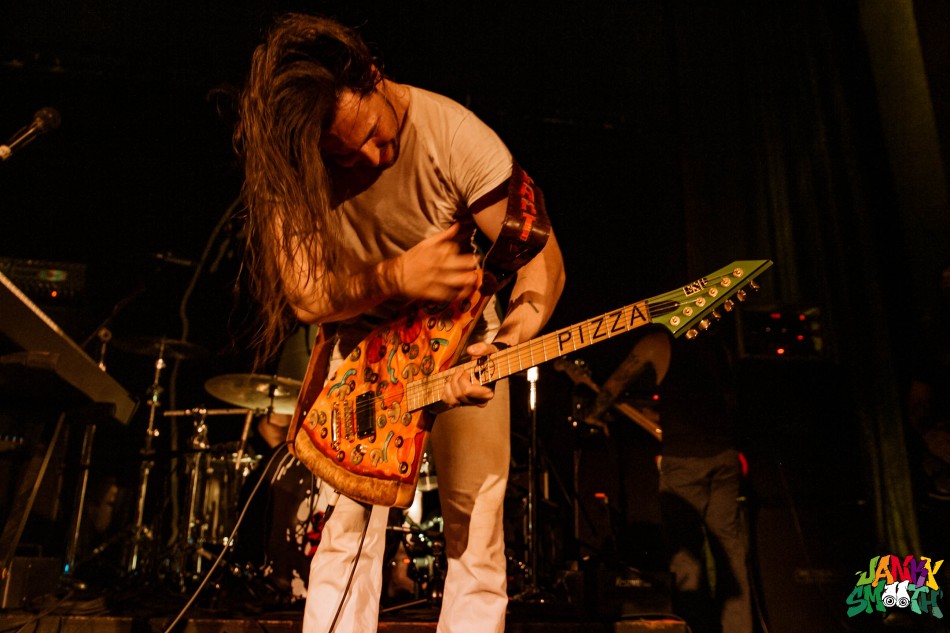