Wednesday night was standing-room only at The Griffin in Los Feliz, an unusual bar scene for a weeknight but a flyer posted to @grifinbarla on instagram yielded heavy traffic for the venue early in the night for yet another, little publicized Ty Segall, “secret show.”

(check out the video of the unreleased song “We Know?” set to be released at the end of the year)

According to the guys working the door, people got there as early at 6:30 to ensure entry. Although regarded as a secret, it’s safe to say social media circulation does a lot for show publicity even on short notice. As this becomes increasingly common, music fans are well-advised to show up early to gigs like this unless you wanna be the sad late arrival begging your friends via text to help get you past the line. From the entry way, you couldn’t see any of the four walls of the low-lit venue. It was next to impossible to work the room for lack of passing space, the bar was stacked three deep at each well and forget about trying to smoke a cigarette because the patio was laden with so much secondhand smoke you felt the preliminary effects of carbon monoxide poisoning. The inside was arguably close to tropical in climate due to the pervasive body heat rising off the crowd, a welcome change from the damp and dreary January gloom outside. A medieval castle vibe to the venue provided great acoustics, but did not afford the appropriate lighting for the multitude of photographers and videographers gathered anxiously at the hearth of the performance space. A flat floor space yielded to a game of King Of The Hill, people clamoring to find any type of elevated surface to peep the performers. 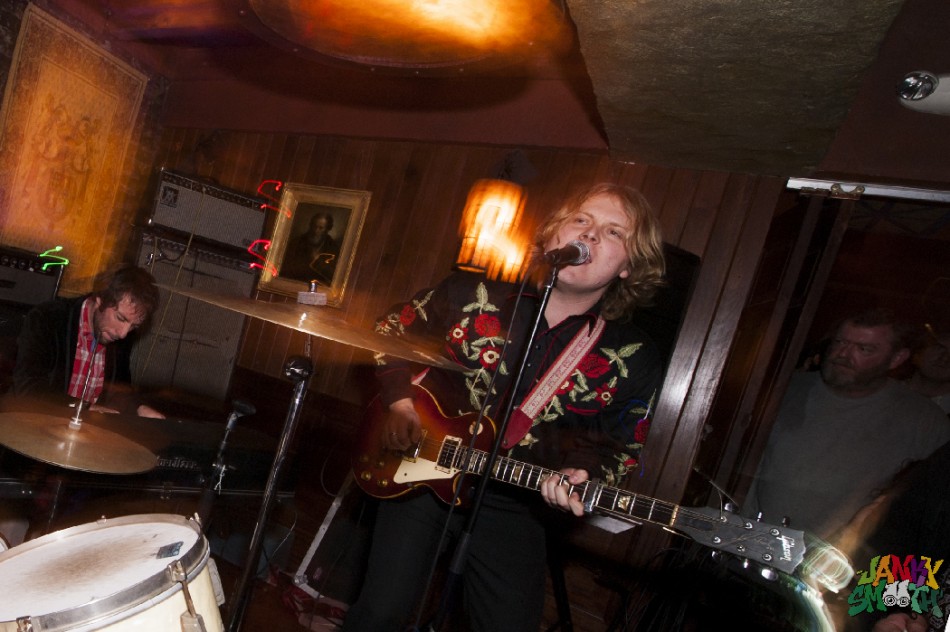 The Birth Defects opened the show for the evening, demanding the audience’s attention with a brand of technical hardcore punk. Shirtless and clad only in skin-tight stars-and-striped jeans, Bassist Phillip Neilson gives an appropriately spastic performance with passionate bass lines that linger to a dissonance that complement the sheer power of frontman Jason Finazzo’s arrangements and vocals. Finazzo is also manager of The Griffin in Los Feliz.

Contrary to the band’s punk moniker, their style is honed, disciplined and easy to listen to and their blistering performance doesn’t wane in quality from the opening number to the close.  Finazzo’s vocals are abrasive and in your face and make for an intensely captivating live sound. The Birth Defects bring a well-manicured but more authentic punk vibe than other bands in the scene that throw the “P-word” around with their publicists.  These guys can truly shred and in doing so, they are living up to their name: Potentially harmful to those in-utero but ecstatically enjoyable for the rest of us in the post-fetal stage. Check out First 8 Mistakes out on Ghost Ramp which was actually produced by Ty Segall himself, before their new album drops sometime this year.  Because based on what we heard on Wednesday night, it promises to be even more hardcore than their debut effort which started out as a “super group”, of sorts and has shed the likes of Petey Dammit in exchange for hungry, true believers such as madman drummer, Anthony Drinkwater and The Birth Defects latest addition of a 2nd guitarist. Ty Segall Fans at The Griffin

Before the openers left the stage, the doors to the venue were closed. It wasn’t hard to tell that capacity ad been reached if not breached at some point well before 10:00pm. Unfortunately for those waiting outside the venue, a strict “no ins-and-outs” policy was implemented to protect those who did arrive early and to mitigate confusion.  People were standing on every available surface; chairs, booths and tabletops to be able to see the nook at the front where Ty Segall would take the stage. Finally, Ty Segall and the Freedom Band entered and the buzzing crowd nodded along with the opening number in awed admiration. Ty Segall and the Freedom Band first look at The Griffin Ty Segall and the Freedom Band at The Griffin

Ty’s musical career spanning almost a decade on the underground radar and even some mainstream crossover has birthed a multitude of musical babies, all of which are burped and swaddled in his live performance. It is elucidated to the audience that Ty loves what he does and performance is a live manifestation of the art that he creates.  Heavy, hollow guitar sounds and precise percussion from bandmate Charles Moothart blend psych rock sounds with traditional garage rock vibes.

Over the screams of the Segall and Emmett Kelly guitars, Moothart played the drums like a civil servant typing at a keyboard but with a sincere smile spread across his face the whole time. He seemed effortless in his ability, almost meticulous. An obviously well-practiced musician, as were the other mostly familiar members that made up The Freedom Band, such as Mugger guitarist, Emmett Kelly and frequent Ty Segall collaborator and comrade, Mikal Cronin and Ben Boye on the Wurlitzer. The combination of the instrumentalism, elated vocals and limited transitions between songs created an immersive musical experience that hinted at the very pronounced Southern Californian musical origins and inspirations. This set was special; Ty announced that the setlist was primarily brand new material. “Half of these songs aren’t coming out for another year!” he shouted to the crowd’s immense pleasure, a comment greeted enthusiastically by his fans. Privately, when I asked Ty about the projects he has in the works, he nodded and smiled mysteriously, “Oh, there’s ALWAYS new music.”  Still, older songs like “Sleeper” found a place among new material along with new arrangements.  The song “Ghost” off the 2012 release Twins reverberated through the room as an extended instrumental jam, leaving the audience rapt for the remainder of the show. His newer songs showcased during the set are familiar in composition but still showcase a newer style, blending Ty’s traditional style with what sounds like a newly acquired, super heavy adaptation of  a “prog rock” influence.  A heavy presence of the Wurlitzer organ, coupled with longer instrumentation and wider sound variation, didn’t stray too far from the garage rock sound Ty is known for but more than hinted that the album after the upcoming, self titled Ty Segall album that will be out on January 27th, will push the boundaries of Garage Rock and into Prog Rock. 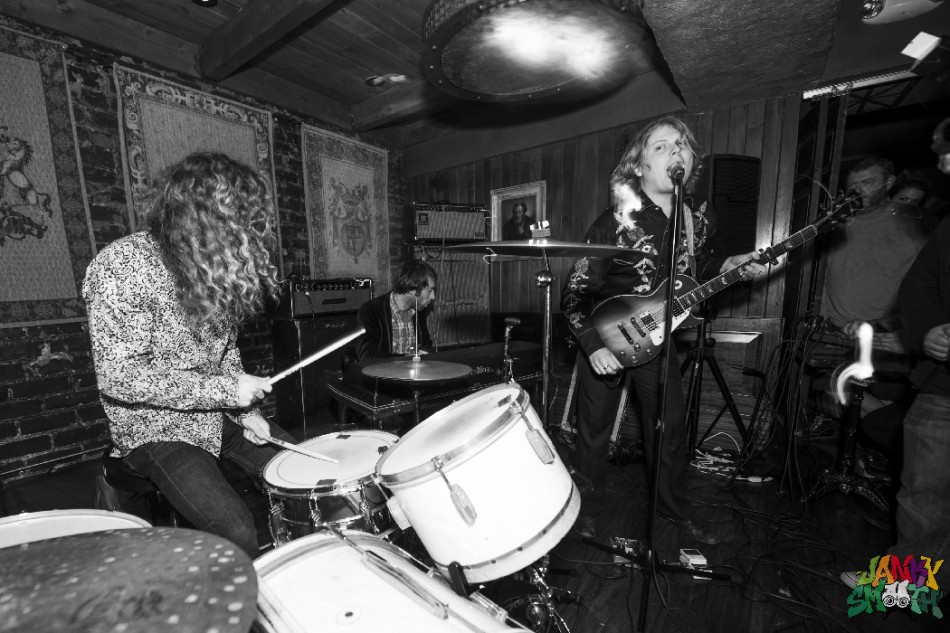 As a performer, Ty commands attention. He isn’t particularly outlandish in affectation, but he commands respect by giving it. What is striking about Ty is his gratitude, which comes across sincerely both on and off the stage. He initially began his set by expressing his appreciation for everyone involved, introducing his band members and periodically thanking those in attendance, thanking the openers and thanking the venue profusely throughout the set. For such an accomplished musician, he is remarkably genuine and humble. He gives a hell of a performance and is grateful for the opportunity to do so. When I asked him after the show if he was impressed by the attendance, he just looked around at those lingering around the  venue. “Well, word gets around. You know how it is.” He is unabashedly himself; an artist basking in the warmth of a successful juggernaut of a passion project who enthusiastically shares a piece of himself in everything that he does. As the multi-talented artist that he is, I think we can expect a lot of exciting new material from Ty in 2017 and beyond. Ty’s parting words to me were “Hey, thanks for being interested!” so shall mine be to you. Ty Segall and the Freedom Band will be at Belly Up Tavern in Solana Beach on January 27th.