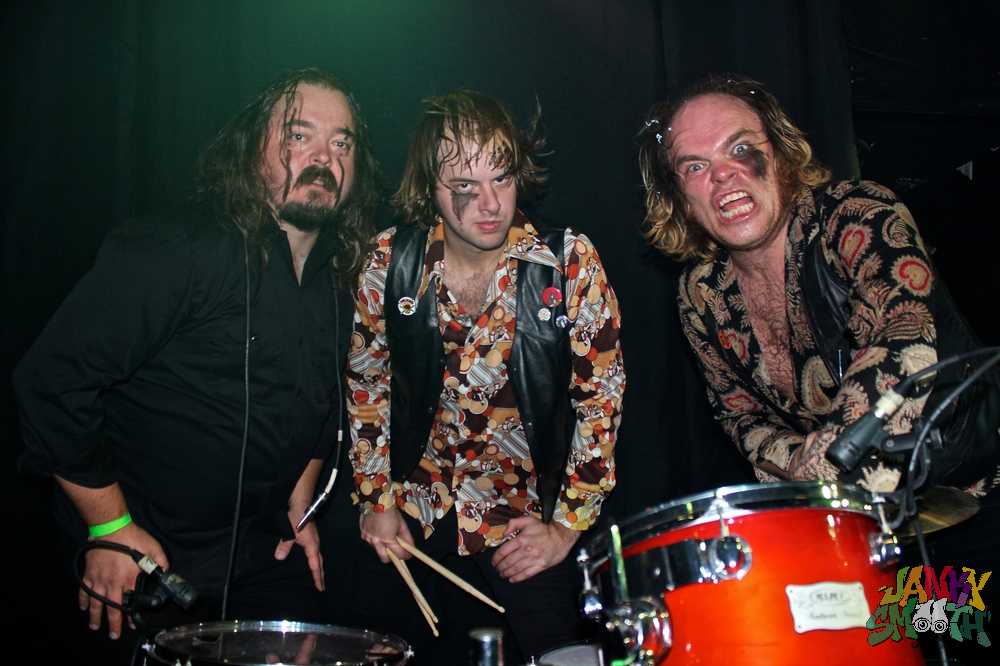 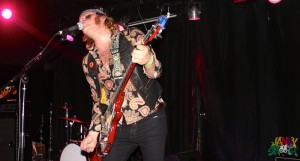 Timmy’s Organism at The Satellite

So I end up in the land of the hipster, the trickster, and the club going fiend Friday Nov the 6th –  Where did this adventure take me do you ask? The good old Satellite, a longtime LA hotspot that has been hosting killer acts across many genres for many years now. On this fine evening, my next assignment was to be a band by the name of Timmy’s Organism– A three piece hard rocking machine, full of earth shattering fuzz guitars, growling bass tones, and superb, technically heavy drums. If you dig on explosive bands that deliver with authority then Timmy’s Organism would’ve been the perfect stop for an exciting start to a weekend. If not, then I don’t know what to prescribe to you, my friends.

Timmy Vulgar at The Satellite

I arrive ready to take on the night armed with a camera, a set of hungry ears, and a close friend to help me battle the evening with an endless and unstoppable tank of energy (thanks Katie). I stepped into the Satellite right at the beginning of the Timmy’s Organism set and prepared myself for the gorgeous noise that was to come. The vibe reminded me of the old punk shows from my days at the Natural Fudge Cafe – grimy, raw, and nervously filled with excitement.  It seemed quite clear who the crowd was there to see, and even clearer they were gonna get a kickass fucking show.  The trio, Timmy Vulgar, Jeff Giant, and Blake Hill walked out looking like a mix’n’match set of 70’s vintage rock dolls- the kind you’re sure to get a lot of mileage out of.  Timmy’s Organism walked onto the stage and executed the first song “Get Up, Get Down” flawlessly.  The rock soldiers really leaned into the second song “Heartless Heathen” and got things moving pretty quickly. It didn’t take very long for these cats to warm things up. The guitar and bass shook into the walls of the small club making the place feel as if it were made of paper. This force, along with the speed and accuracy of the drummer only added to the energy that was building in the room. The stage mannerism of guitarist and singer Timmy Vulgar was more like stage combat rather than stage presence. He flung his body this way and that with one goal and one goal only – to rock the fuck out.  His movements created an excitement in the air that had the crowd wanting to participate in any way possible. I looked over at my friend at one point and could feel the inspiration she was channeling directly from the music.  Vulgar transferred his talent from guitar to vocals with ease, while able to execute on his monstrous stage presence- the sign of a true front man. Bass player, Jeff Giant stood his ground holding down the rhythms with absolute clarity and roughness.  Jeff’s bass tone was incredible.  With every thud of the bass guitar, I felt my chest rumble and my jaw shutter.  One of the many songs throughout the Timmy’s Organism set that stood out to me was the tune “Back in the Dungeon”. The intro started with a slicing and furious fuzz guitar that Vulgar bent into strange undertones and huge harmonics. When the drums and bass kicked in, they added the healthy helping of meat and potatoes that made the song perfect.  The kind of track that pushes into your mid section and makes you want to run around like an idiot.  Just before the chorus, 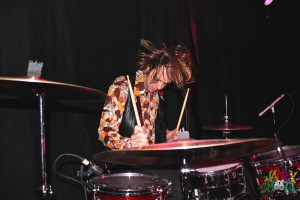 the song exploded with drummer Blake Hill shoving the drums into a killer double time beat that introduced the chorus.  All throughout the night I found myself highly impressed with Hill’s drumming.  His ability to smack down as heavy as he was yet keep the dynamics intact was notable.  I could see Back in the Dungeon becoming a proper anthem for all to sing and scream to.  If it had the crowd at the Satellite all hot and bothered, I’m sure an audience on a much larger scale would only make it that much more epic. The evening rolled on and the tunes only got heavier, craftier, and more clever.  My night almost came to a standstill during the song “Drunken Man” – when an actual drunken man decided to strong arm me with his big ass shoulder. With the music playing in the background, the people dancing, and the lights flickering – it felt like the soundtrack for the moment. I wasn’t about to let some jackass’s drunken transgressions ruin my night, no sir. Instead, I felt my blood boiling and the sound of the music give me courage enough to make a stand.  So I shoved him hard Timmy’s Organism getting lit at The Satellite

and I reset his attitude back into the proper focus of the evening.  The band finished their set with the songs “Bouncing Boobies” and “Wounded White Dove”, both well written and well dressed tunes. Just before the end of the set, I became really stoked to see singer Timmy Vulgar equipping his guitar with what seemed to be fireworks.  Quickly, I learned this was exactly what he was doing.  During one of the final songs, you could see the flames and sparks of the firework shooting out from the top of Vulgar’s guitar. The audience stood in amazement, preparing for a mishap or freak accident that thankfully, never came.  Instead, we all got another awesome memory to take home with us at the end of the show. All through the night I was fueled by the band’s energy and excitement, making every moment at the Satellite on Friday night one that was well worth the go around.  I’ve played the stage at this club in my gigging years and know first hand how tough it is to get your own, personal sound out of this room. Timmy’s Organism navigated this hurdle with what seemed like little effort. Each band member sounded as if they were separated by their own special dark magic, while at the same time, coming together to create a monster sound that helped each song mold into an effective blend of power and technique. Many bands making their way to the spotlight lack what this band has so much of – charisma, a great sound, and aggression. If I were to guess where this band would be in the near future I’d say probably up on some of the bigger festival stages. My hat is off to Timmy’s Organism and I recommend them to anyone looking for something fresh and sacred. Become part of the wave, listen and learn, and feel as they smash their way into your soul.