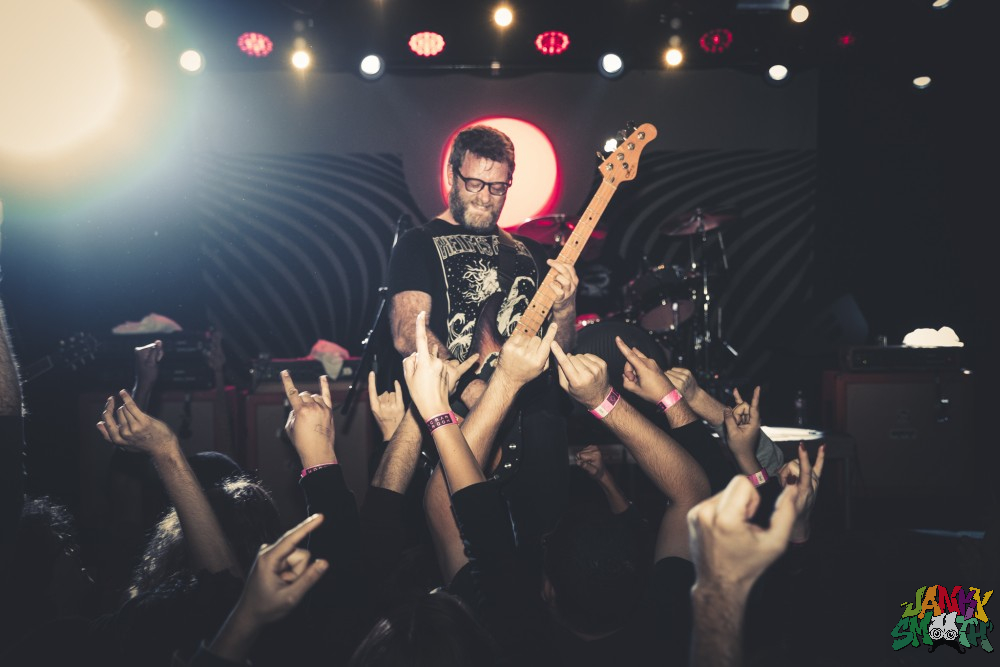 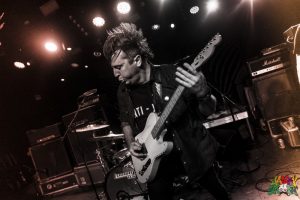 I went to see Red Fang at The Teragram Ballroom a couple of Sunday’s ago and all I can say is… Dayum! Red Fang, along with Torche and Whores lit up the best sounding venue in town like a Xmas tree. Both by inciting attendees to engage each others arms and elbows in a way that I’ve never seen at the young but formidable Teragram Ballroom and also, dialing in the sound to a miraculous display of live audio that was unprecedented to my ear holes. Every note, fret harmonic, hi hat hit and distorted gumbo of string rakes and 1/16th notes and drum rolls building to a fever pitch- a build up of sonic rhythms synonymous with that crash, chord, combo of controlled catastrophe that defines the end of every great rock song. That thing. 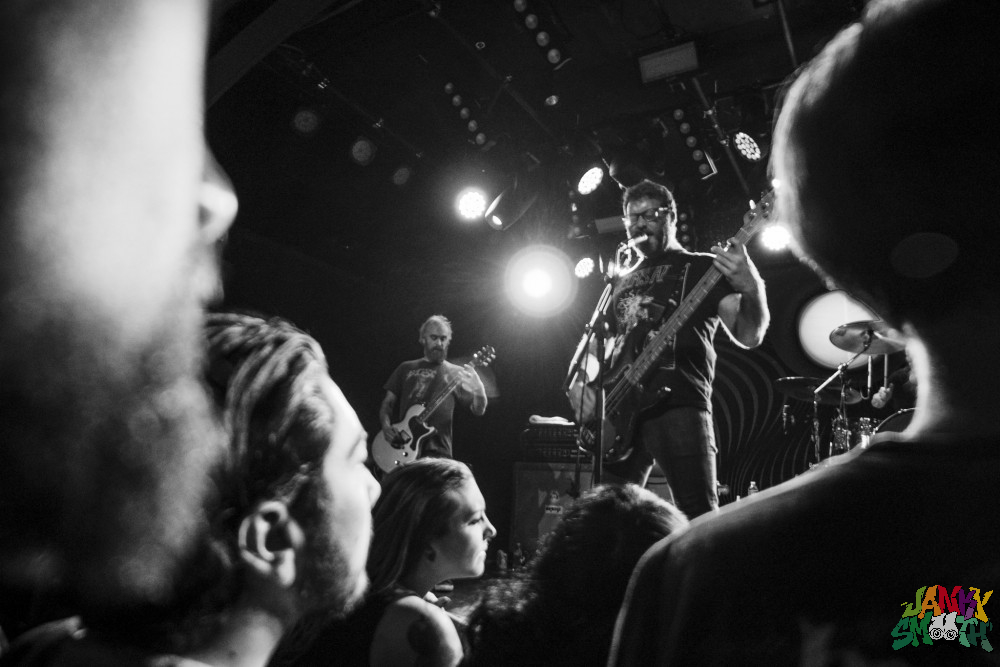 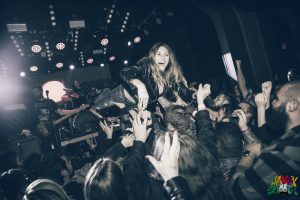 That thing was as clear and defined to the naked ear as the most finely produced studio album I’ve ever heard. Clearer, in fact. I mean, without making this review about the sound at The Teragram Ballroom, it not only needs to be said but it needs to be over exaggerated, so as to relay just how perfect that room sounds. And… since I had yet to hear any really heavy bands there, it took hearing some metal to state definitively that there is no better sounding room in Los Angeles to see live music. Period. Red Fang and Whores aren’t metal, you say? Well, fuck you too because I already had this argument with people when I reviewed the Head Wound City show at The Echoplex and guess what- I win.  Metal heads are the only clique of bands and fans that deny being what they are.  That’s how “uncool” the word metal has become.  But you and I know what that means…

There seems to be a rising tide to get back to basics in metal. No triggered beats, no gimmicks. No NuMetal. PLEASE.  Because even the word itself, “Nu Metal” begs to burned at the stake.

No.  Just straight forward, heavy as fuck rock music that induces the banging of heads. In my opinion, bands like Red Fang and others on the bill at The Teragram Ballroom on Sunday such as veterans, Torche and up and comers, Whores, are paddling into a wave that is about to break on the NuMusic industry and white wash all the poppy bubble punk bands and the now aged cheddar of the LAST new guard in metal.  Right into a rising tide that carries with it guitar solos, 7 minute songs and super ugly dudes. No fear of looking uncool for the already uncool and isn’t that where the future of “cool” always starts?

Once this current psych/garage/punk rock revival is properly and thoroughly exploited by publicists and managers, packaged and branded by the new guard of people looking to make their business in the arts, the kids will start looking for that untouched, untampered and pure of motive music and art that hasn’t been completely sucked dry by premature licensing deals.  Plus, there must be an evolution in levels of feelings like- frustration, determination and particularly, rage.  Sad bastards make shitty revolutionaries. While I wouldn’t call a well-established band like Red Fang untouched, they are the perfect ambassadors, casting a wide net of rock and metal… oh, sorry… “Stoner Rock”, to appeal to both those who want a more melodic vocal in the contributions of bassist, Aaron Beam or an angrier, more intense vocal from lead guitarist, Bryan Giles. With a production team that engineered albums for Korn and Slipknot, Only Ghosts doesn’t have that low budget feel (whether by design or actually having a low budget) that is synonymous with a burgeoning new sound or revival but the smile that cracked on Bryan and Aaron’s face was priceless as the most alpha pit I’ve ever seen at the Teragram got cranked up to 11 when the band broke out into the song Flies. They were smiles of men who knew their impressive longevity in an industry lost in the abyss would be extended into the icon zone of rock- 10 years and beyond.  Stoner rock may not have the word metal in it’s label but when you listen to Red Fang, it’s not hard to see “Heavy Metal Parking Lot” in your mind’s eye or hear Fairies Wear Boots in your My-Fi. 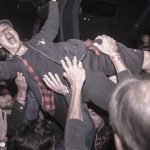 Swimming at The Teragram 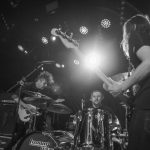 The Best of Bad Intentions 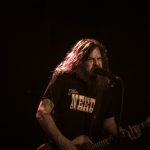 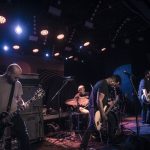 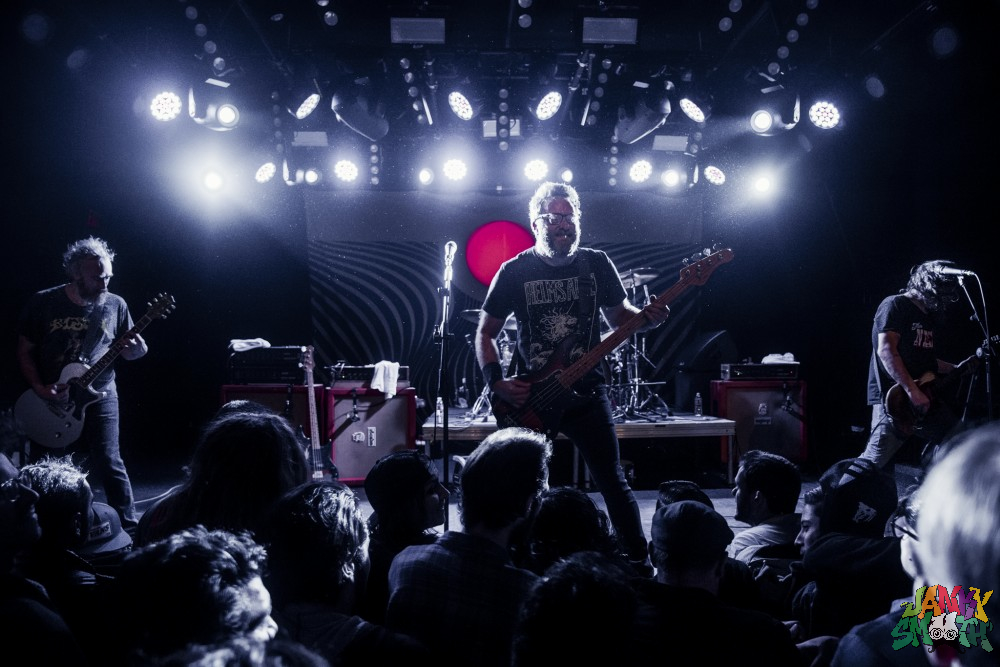 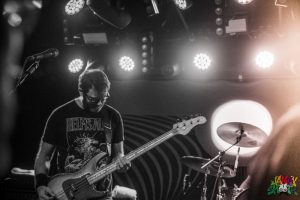 Amidst the mosh pit melee, I barely made out Beam saying something about Oregon becoming L.A. north or Northern Southern California or some bullshit but tonight wasn’t the night the typical limp dick, resting bitch face indie L.A. scenesters standing with their arms folded, so Beam was rebuked by the crowd in a forceful but affectionate way, of course.

The rise of Red Fang gives me a hope for guitar driven music driving back to a more technical cycle that’s celebrated by head banging and the type of thrash metal that led me to pick up the guitar seriously for the first time when I was 14.

Opening band Whores REALLY brought the heat with the amazing material on the new album, Gold and a rageful energy from frontman/guitarist, Christian Lembach- dude seemed a bit unhinged and I like that. The room was ¾ filled by the time they ended their set and they gained many new fans that night- including me. 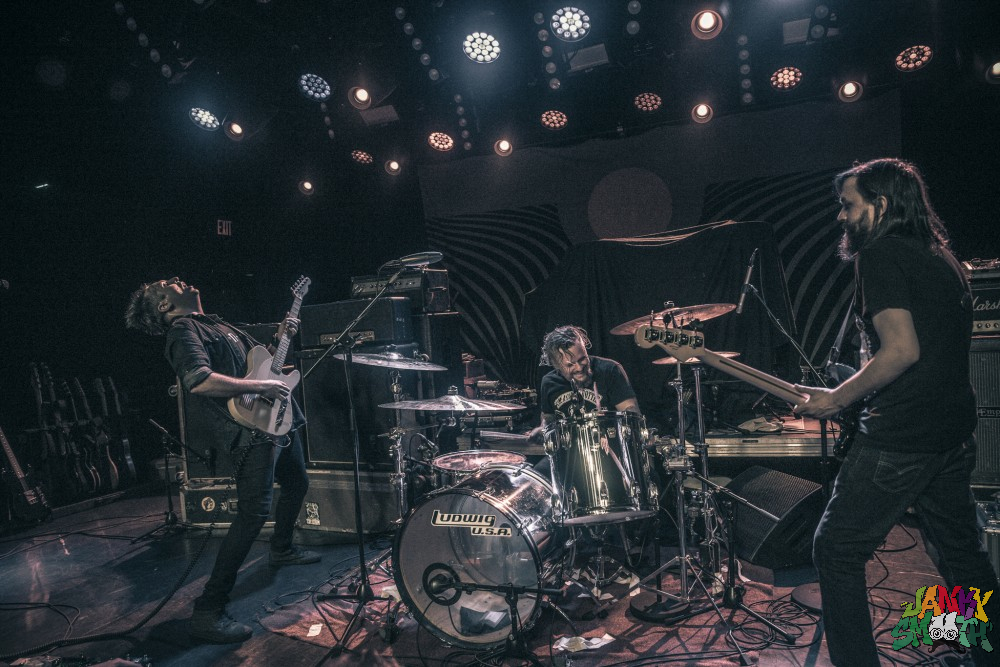 I never got into Torche- mainly because of the way the band rebukes the origins of the sound that made them popular and the sweet, melodic vocals of Steve Brooks but I really dug their live set. I get not wanting to be defined by a sound and rejecting the pressure of fan expectations but as Brooks mentions in this interview, he gives all metal props to the 80’s and 90’s exclusively but rather than evangelize the right era, he chooses to bristle.  Maybe I’m reading too much into it all.  That’s been known to happen but the sound at The Teragram was at it’s most vibrational and penetrating during Torche.  Truly one of the best sounding metal shows I’ve ever heard engineered. 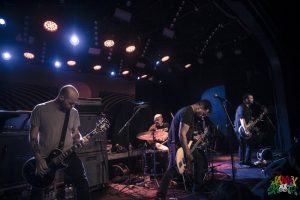 With newer bands like The Shrine making headway both in the evolution of cyclical music and virtuosity restored to the craft, I can’t help but think that this is about to pop off here in L.A.

With such a big emphasis on garage and psych at the moment, the Ty Segalls and the John Dwyers of the underground independent music scene of planet Earth have made the guitar solo and being a gear and tone nerd cool again. Yes, there are bands such as Fuzz, Uncle Acid (Uncle Acid at FYF), Weedeater and the post mortem canonization of bands like Sleep that have kept doom, sludge and stoner rock at the very forefront of heavy music for the discerning, non-European music fan, (Metal only gets bigger in Europe, year after year).

Even though Red Fang has most definitely fit into the stoner rock sub genre of metal, bands like Red Fang and The Shrine have pumped up the BPM’s enough to help inspire an exodus out of the sludge and doom metal wheelhouse. I mean something must’ve inspired Metallica enough to make music that doesn’t suck anymore and it certainly wasn’t the anticipation of new releases from the likes of Drowning Pool or Korn.

The roots of metal and every sub genre that spawned from it from doom to death, noise to Through The Never, it all evolved from just a few sounds- Black Sabbath being at the beginning of it all. Doom, sludge, metalcore, thrash, speed, black metal, death metal, noise and stoner rock- all bastard cousins of metal. And even though it’s watered down prep school cousin NuMetal ushered in the collapse of the music industry, bands like Red Fang and Torche have continued to flex their beefy riffs without much incentive to do so, as others tried to squeeze the last bit of juice out of the lemon that was the old guard of music industry major labels.  And while I’m thankful that the brooding banging was kept alive in America by the bushel of doom and sludge bands that have kept the interest of Americans, I’m ready to pump it up a notch and I’ve been listening to Rust in Peace nonstop since the Red Fang show at The Teragram Ballroom.