The Blank Tapes in London shot by Sheva Kafai

It’s been quite a journey being in London. There are 8,539,000 people living here, yet it is one of the loneliest cities I have ever been to. Upon discovering that The Blank Tapes were coming to town, I was exuberant with joy knowing I would finally get the chance to see some familiar faces. It was a Tuesday evening and they were playing at a venue, The Shacklewell Arms, which is conveniently just down the street from where I currently reside. I couldn’t count the minutes fast enough for when I’d be able to see them. Their show started at 9:45pm and at approximately 9:00pm, I heard American accents emerging from my kitchen. A tall, shaggy blonde haired dude walked up to me and got half way through an introduction before he realized, he in fact, definitely knew me. Oh Mr. Matt Adams was just living up to his stoner persona. Ironically, my housemate was invited to fill in on the drums mid-way through the blank tapes tour, and they had made already made arrangements for the band to stay at ours. It was a pleasant surprise seeing Adams walk through the door of my place and it only furthered my excitement in seeing them perform.

Once entering the venue, I was confused as to where exactly the band was. I wasn’t sure if I was in a live music venue at all. I found myself in a pub, surrounded by English people who were eagerly outlining a wooden topped bar, awaiting their beloved pint. Because I was with people who had been there before they led me through a few double doors past an old pool table; from there I could see people leaking into the halls from what was clearly the room in which The Blank Tapes were performing. Typically for me, being five foot four at live gigs translates to me not being able to physically see the bands perform, however, that wasn’t the case in this instance. I used my size to my advantage and squirmed my way to the front of the stage. Ironically, I was greeted with the lyrics “I don’t know what to do, I miss the fuck out of you. I said hey my LA baby”. Beautifully backing up Adams was Veronica Bianqui. In her falsetto she sang “I said hey LA baby” while pointing directly at me. I had been craving that sort of familiarity for about three months now and I couldn’t wait until after the show – I’d finally be able to party with MY friends again! 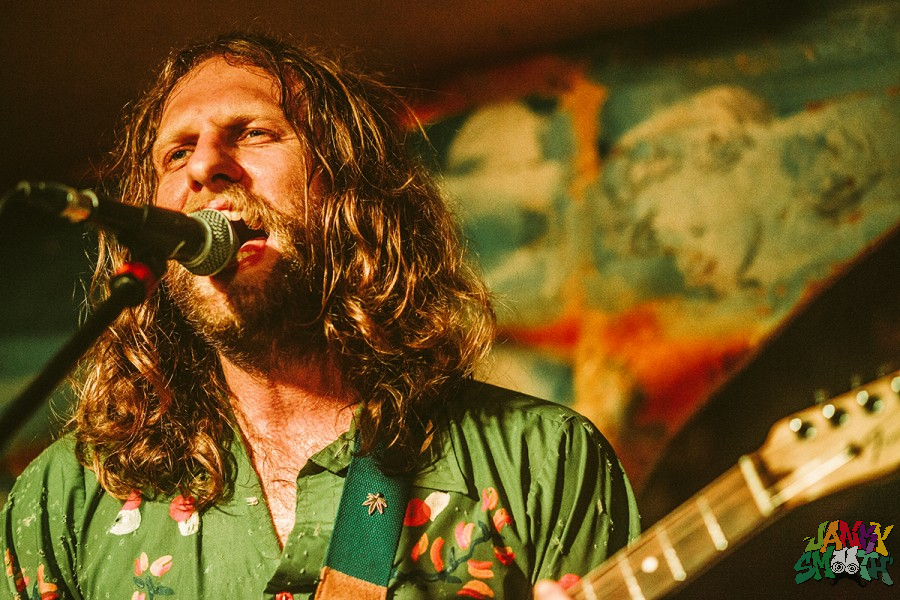 Matt Adams of The Blank Tapes shot by Sheva Kafai

The band definitely lived up to the Californian stereotype I so often get associated with out here. Adams stood center with his long hair and bell-bottoms, as Bianqui to his right sported a sixties dress and shook the tambourine with the kind of dance moves and animation that looked straight out of a Ronettes music video. The tantalizing guitar riffs sent the audience into a state of hypnosis, truly embracing the 60s vibe that The Blank Tapes so ebulliently give out. Adams has produced a sub-genre of his own, that straddles between psych-rock and doo-wop. The instrumentation is complex and hermetic, yet backed with falsetto and rather simplistic lyricism. Whatever genre you’d call it, the English were bloody loving it!  Heads swayed back and forth, and at one point, I was genuinely concerned an 18 year old may have taken too much acid, given her vivacious dance moves. Substances or not, the Blank Tapes took the audience to that place. It was as if they transcended with us into a room filled with nag champa and lava lamps. Living up to the quintessential, Californian hippy vibes, Adams ended the set with “so uh, does anyone around here smoke weed?” 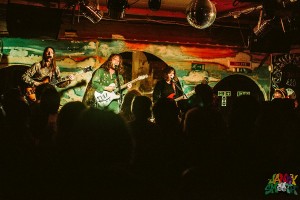 The rest of the night sort of became a blur. Because there are such close ties to those in the music industry in Los Angeles and those in the same industry in London, we somehow ended up with a group of 20 something mobbing onto a double decker bus. We took up the entire top deck, and in London, bringing booze on public transport is not only legal, but almost encouraged. Being amongst a group that is normally seas apart, but also very intertwined, made for the most beautiful mix of debauchery. We all ended up at some bar that seemed to exclusively be reserved for us and our shenanigans. The purple walls were adorned with disco balls and televisions playing old music videos. In the middle of the room was a pool table, where we Americans got owned. It wasn’t until about 6am that we found ourselves all slowly making our way home.

In a hungover state the next morning, we immediately went out for breakfast. However what was breakfast for us, was most certainly lunch for the more decent, contributing members of society. Bangers and mash for breakfast it was!  Because the Blank Tapes had so much ground to cover in Europe, we had to rush through our meals, in order to make it to their next UK destination. While walking back, poor photographer Sheeva was crossing the road and got ran over. Luckily it wasn’t by a spice girls bus, but it by a cyclist going full speed. She was alright and it sort of made for a shocking, but funny story. I’m not entirely sure what The Blank Tapes thought about London, but I sure as hell know London thought highly of them.

I had a chance to chat with Matt Adams on the record about what the future hold for The Blank Tapes and himself.

Paige: What was your favorite place to visit whilst on your UK tour?

Paige: In terms of band members, I know you sort of just tour with whoever is available to play. Did you have anyone in particular you had in mind to bring a long on this tour?

Matt Adams: Yeah it was basically the people that I brought, except initially I wanted a different drummer to come along. There’s a guy who plays a lot on my records.

Matt Adams: yeah he’s got another band he plays in called sugar candy mountain and they were on tour at the same time.

Paige: Was the whole tour pretty much brought on because of your ojos rojos release?

Matt Adams: Yeah I mean it was sort of supposed to be a tour promoting the record, but as things go, everyone kind of lagged with it. Technically the record doesn’t come out ‪until Friday now. But it was supposed to come out before the tour. Even though I had copies of the vinyl on the tour. The whole promotional thing got delayed quite a bit.

Paige: Is it called rojos ojos because you’re always stoned? It translates to red eyes.

Matt Adams: I mean yeah. It doesn’t necessarily have to do with ME always being stoned. But yeah it’s about being stoned.

Paige: Yeah back in 2014 you released ?too stoned in Europe? Album. Can we expect a 2016 similar release based on this tour?

Matt Adams: That one was just like basically just a tour little special. There as a small label in Greece that wanted to release a cassette so I had an album that came out called ?geo dome piece? And a song on there is called ?way too stoned? So I just used it as a bonus release and took four other songs and put it on there. It was a little special EP for the tour. Even though it’s online, it was never initially meant to be an album. But no no intentions on doing another one.

Paige: So you’re in Stockholm on your way home now? What’re you looking forward to the most?

Matt Adams: It’s been about five weeks and I’m just really looking forward to being back in California. It’s my home base so I just feel good when I get back there. I have a lot of musical work to get back to.

Paige: What kind of stuff do you have planned?

Matt Adams: I have a little California tour booked for next month. So we’re doing that and then really I’m just trying to finish up a lot of other recordings I have. This ojos rojos record is the new record but it’s not really new to me anymore at this point because we recorded it three years ago I think. Sometimes it’s just the way these things happen. I have another album that’s basically done.

Paige: When can we expect a release for that one?

Matt Adams: The next official release, I might have a little EP in between then, but the next album probably won’t come out for I’m guessing a year. Hopefully sooner.

Paige: Ok so I have a wild card question for ya.

Paige: If you were a breakfast food, what would you be?

Paige: That’s the most Californian response I’ve ever heard.

Matt Adams: I mean yeah, I could have that every day.

Paige: Ok well enjoy all the tacos and bacon covered hot dogs for me every day please.