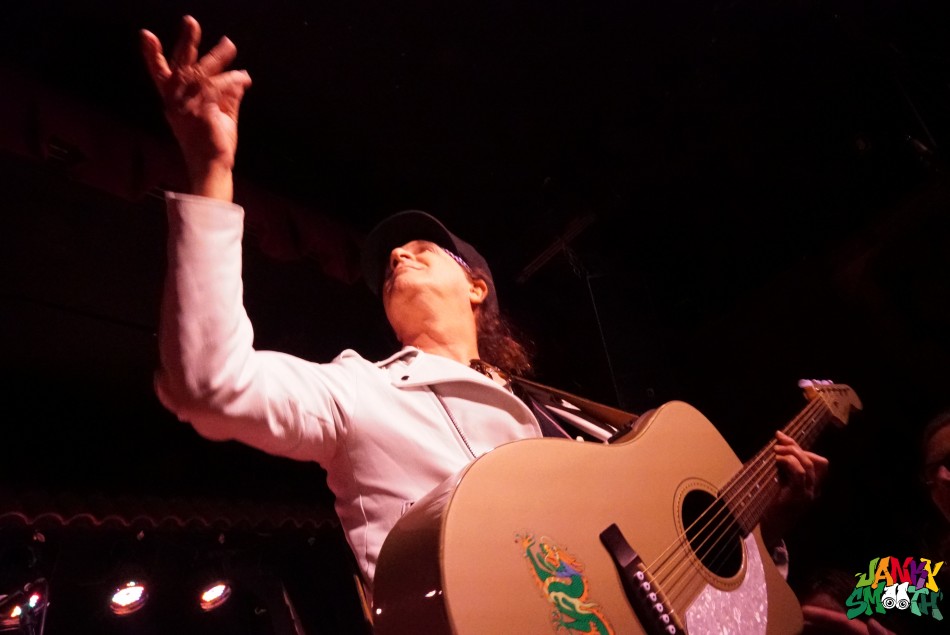 You read that title right. Every last one of us, from the most hideous to the most creeporial (or is the word creepatory?) got laid that night. This was just an event like no other, between the cool, rock and glam songs Sylvain Sylvain was licking out to the unmistakable camaraderie inspired by any Lethal Amounts shindig, getting laid gets easy.

Part of the reason is that Lethal Amounts brought back their Pure Trash night which used to be a staple every week at Monty bar and ever since its absence, I’ve had a lot more trouble chasing tail. Now that it’s back though, lock up your daughters… fuck it, your sons too. Sylvain went on a bit late, strutting on stage after midnight but that left a few hours of great hanging to transpire at the ol’ El Cid with plenty of palomas and beers being passed around. I was actually just as entertained by the groups of people talking and being natural with each other as I was for the show and that’s not a slight against the performance. Some weird dude was randomly playing this hilarious bird whistle ocarina that cracked me up every time.

You just want to put your head down and your heels on at a Sylvain Sylvain show. He played New York Dolls classics, old rock and roll covers, solo songs, and even a few songs by his first band The Pox. Heavily engaging the audience to sing and clap, it was one of the most fun and genuine shows I’ve ever been to. Sylvain’s presence and personality attract fun wherever he goes and you’re sure to know that any place that has a hard time dealing with the man must be full of stiffs. The stage banter was just as good as the music, for instance Sylvain told us a story of the original lineup of The New York Dolls, including Johnny Thunders, all going to a Bo Diddley concert to hear a song they covered by him called “Pills”. Then when they got inside the venue and situated themselves near the front of the crowd, they all started chanting for the song, “Pills! Pills! Pills!” Bo had forgotten he even had a song called “Pills” and thought the kids were on drugs or selling drugs and got them all kicked out of the show. Another hilarious bit of banter came when Sylvain discussed living in Nashville and how much he hated it. He made such a great case against ever visiting the city that it made the whole music scene down there seem like a snore. Some of the best musical moments of the show were his performances of “Frankenstein” by the New York Dolls, “14th Street Beat” a solo song, and a poignant cover of the Velvet Underground and Nico’s “Femme Fatale” which was amazing because we never ever get to hear Velvet songs live anymore now that Lou Reid’s dead, whether by him or by tribute, so this was a tiny joy for us all.

Lethal amounts did it again, putting on another event with legendary talent and legendary vibes. I wonder if in 20-30 years, they’ll remember how we partied by the words written about the scene. You never know, people might talk about us someday the way they talk about Iggy and Lou and The Dolls and Ramones and Debbie Harry and Andy Warhol and all those beautiful crazies in New York in those stillborn 70s.