The greatest experience one could have at a concert is that moment of total release when the band taps into that one elusive hook that grabs you, doesn’t let you go, and makes you travel inner and outer space while standing in one spot.  Seeing the legendary stoner metal band, Sleep at The Fonda Theater allowed me to fondly remember that electric feeling when I saw Mastodon at Coachella and lost myself to the song “Quintessence”, who’s chorus goes “Let it go! Let it go! LET IT GO!“  That letting go is a spiritual experience, the same transformative, depersonalizing process one might have at a Mega Church. For a moment, one becomes the universe entire and that whole universe only exists to rock out.

Sleep is thematically a stoner metal band with doom metal licks, so why do I feel like their sound taps directly into the marrow of religiosity? Why does a band that sings about fantasy themes and marijuana name their album Jerusalem? Why at the end of that concert did I feel somehow enlightened or spiritually full? I didn’t know when I bought my ticket to their show with The Melvins and I don’t know now as I write this article’s first paragraph. I just know that I won’t stop writing until I come up with a reason that satisfies me. Sorry if that takes me longer than it should. 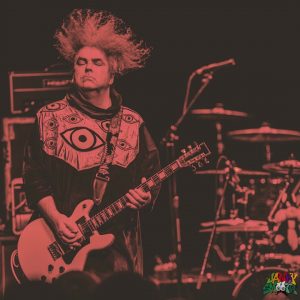 To me (the) Melvins, though sludge, represent the purity of rock and roll. Buzz Osbourne has produced so many records and toured for so long without getting the recognition he deserves that I think seeing his band live is a requirement if you want to call yourself a rocker. He rocked out of stage wearing a robe covered in eyes, as if now he has transcended from a grunge veteran into a sage. He banged his head to the sludgy, drudging rhythms he was blasting out and his grey fuzz-fro crested back and forth with him. Their set sounded like the musical version of playing in the mud as a kid. You can see the beauty in being covered in mud. Thus, within the sludge one can make out the nuances of jazz and blues and still feel a connection to the basics of rock in moments like when they covered the Beatles, “I Want to Hold Your Hand”. They were heavy and brutal but slow, drawn out, and kinda quirky. It was like metal lounge music or something. I think the MC5 would’ve sounded like The Melvins if Detroit made as much coffee as they did cars in the 70s.

Based on a set like this, you can see that the band wasn’t just trying to entertain but break new ground for themselves.

And now, collectively, all of us in the sold-out Fonda Theater were getting ready for bed. Huddled there, tucked into each other. With weed to uplift us and booze to drift us back down, we gazed around at the room and really took it in. In front of us was a plush green curtain, dark and felty. One could get lost in that hue forever. Around us, the walls of the Fonda were painted with Hieronymous Bosch’s version of hell. Inferno on every side, demons and abominations bearing witness to the same show, Sleep’s introduction was drawn out with audio of the Moon Landing’s Transmission playing over the loud speakers.

After tripping us out for twenty minutes, the curtains finally rose up to release the band onto us. They began with “Dragonaut” and my eyes immediately fixed themselves upon Matt Pike, who’s mesmerizing and virtuosic presence are central to band’s power. Beer belly, tattoos, and all, the stoned Pike plucks at and bounces his fingertips off his strings to somehow manifest magic. Likewise, Al Cisneros’ bass slapping was a revelation and Jason Roeder slammed his drums into dream dust. All this creates not a wall of sound, but a towering, colossal monolith of it. The band is like a black light poster come to life, with riffs that contain hyper-glowing Phosphors.

I hadn’t smoked pot for over a year but when one fateful joint surfed its way through the crowd toward me, I felt morally obligated to partake. Not only were my fears of a bad time crushed but I experienced nothing short of pure delight. So, was it the drugs that connected me to a higher being or a higher state of being, in that concert? Was it all just a fast-food religious experience or was the music the key to unlocking the golden corridors of my mind and heart?

I will argue that it was the music. Of all the acts I’ve seen and created worlds of symbolism for, only Sleep made me feel like if their music was played in the old city of Jerusalem, that it could somehow rattle the bones buried beneath the limestone awake. It’s as if Matt Pike plays with some kind of sacred geometry when he plots out the shapes his hands make with the guitar. Or is it that sacred arithmetic called Gematria? Where perhaps the numerals represented by the notes he plays also represent a Hebrew letter that when added up reveal the true and secret name of G-d that the ancient priests used to summon him. If humans interpret sound to have more emotional meaning than words, then it is Sleep’s sound that is conveying the secret to the universe that words cannot. (Also see Pythagoreans)

You know how some metal bands like to say “HEY!… HEY!…” with every beat to pump up the audience at a concert? Well, Sleep’s version of that would be “yud HEY! vov HEY!”

They played the songs the fans came there to see but they played them using their improvisational style as if leaving their music up to fate.

Sleep’s sound bears a resemblance to the sacred because just like the way they make us lose ourselves and connect with a higher plane, they themselves are connected to it. They live there. They’ve built a home there. Where and what exactly is that place, you ask?

If you’re a fan of psych rock there’s a road. If you’re a fan of stoner rock, there’s a road. If you’re a fan of doom metal, stoner metal, or just plain ol’ Black Sabbath heavy metal or whatever you’d call Blue Cheer; there are roads. These roads start in different places but at some point, they converge and when they do, they lead up to the foot of a holy mountain where a hermit is said to live. That hermit is Sleep. And when they started climbing that mountain when they were just a hardcore band called Asbestosdeath. They reached the holy mountain’s peak and climbed Jacob’s Ladder on the Stairway to Heaven. Now that hermit rarely returns to the city below his mountain and only to remind people of everything they forget living in the city.

By the end of their set, our eardrums had died and went to heaven and the paints which depicted Bosch’s version of hell had melted off the Fonda’s walls to reveal the pure blank paradise underlying everything.

It was pure revelation.