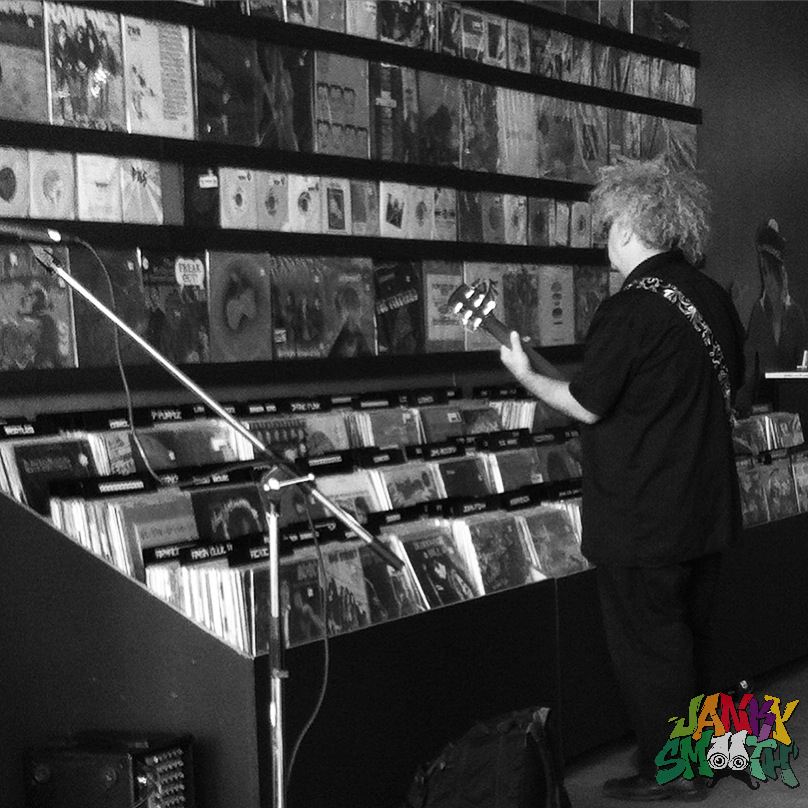 A free Melvins show at Permanent Records, I was in! A great mentor of mine once told me you can always tell who the best artists are because no one shows up at their gallery receptions. That art world metaphor seemed non-translatable today because 2 hours before the Melvins performance at Permanent Records, there were already 25 people outside in line. In fact, about an hour before the doors opened there was a queue down the block and into the Post Office parking lot. It looked like those who didn’t opt to “get there early” wouldn’t be getting in at all.

The Melvins are that band who should have disappeared a long time ago- Disintegrated, vanished. Their amps are so damn loud they, at the very least, should have at some point been vaporized. I can’t think of a band that has played more concerts, gone through as many lineup changes, become huge, been dropped out a window, suffered the downside of drug addiction and yet, been able to keep things in perspective, move beyond it, keep making music, not broken up and still came out of it all laughing. And…if you go to a Melvins concert be prepared to laugh cause these guys are hilarious. They are also an enigma. Not simply because they are one of the few bands who have genuinely created their own music style (spawning a whole post-Melvins generation of bands like Karp, EyeHateGod, Jucifer and Isis), but more because this band, which began way back in 1983, just hasn’t really slowed down.

The concert was hot and packed. It smelled like body odor, or maybe that was just me? Another sign you are somewhere special- all those bodies sandwiched together sweating and everyone was still smiling. In any other situation and for any other reason it would be miserable, but we all wanted to be right where we were. I even made room for someone to squeeze in a little bit closer to the stage. There were so many people waiting to get in that the Melvins had decided to start early and play two sets.

Buzz had just come off his solo acoustic tour (100 concerts all by himself), then right into a Melvins tour (another 24 concerts) and straight into today. It was an acoustic guitar, but gritty and amplified, and a full drum set, but with an upside down snare with no bottom shell for a bass drum. It was the core Melvins, as they have been since 1984, sans bass player: Dale and Buzz doing it as a two piece. Interestingly I did catch Kevin Rumantis (former Melvins, Cows bassist) standing outside, looking in through the window. Having no bass player didn’t really take away from the surprising fullness and workability of the guitar and drums alone. Once again, they pulled it off.

The show began with a track from Buzz’s 2014 solo album “This Machine Kills Artists” and then straight into a 30 minute set of Melvins songs. Some recognizable, others more obscure, but all with an acoustic guitar, no loud amps today. One of the sweeter moments was when Dale’s elementary school age son requested “Great Balls of Fire” and the band obliged by breaking into the Jerry Lee Lewis hit. That’s right, all of Dale’s kids were there, right up front. The crowd seemed pretty pleased.

What’s most incredible about this band, 32 years on, is that they seem to still be having so much fun. I mean really having fun and just doing it because they love music. Watching the Melvins play live is like watching the Melvins rehearse in their practice space. There is a total lack of self-consciousness, they play like they’re not being watched. They’re just dudes rocking their songs, no different (except that they tell a lot of jokes on stage) from what and how they were doing it 3 decades ago. Take away the Sunn Amps and speaker cabinets, the oversized bass drum and the ultralow end bass player, and you are still left with a lot of enthusiasm. It was comical and at the same time inspiring watching Buzz sweat and riff power chords on a Blueridge acoustic guitar. It was even, dare I say, somehow more innocent, like what you would have expected to see at the formation of the Melvins not towards the end. No ego, no bullshit, Buzz and Dale both doing what they were born to do: make music and all the while keeping it very real and hilarious.