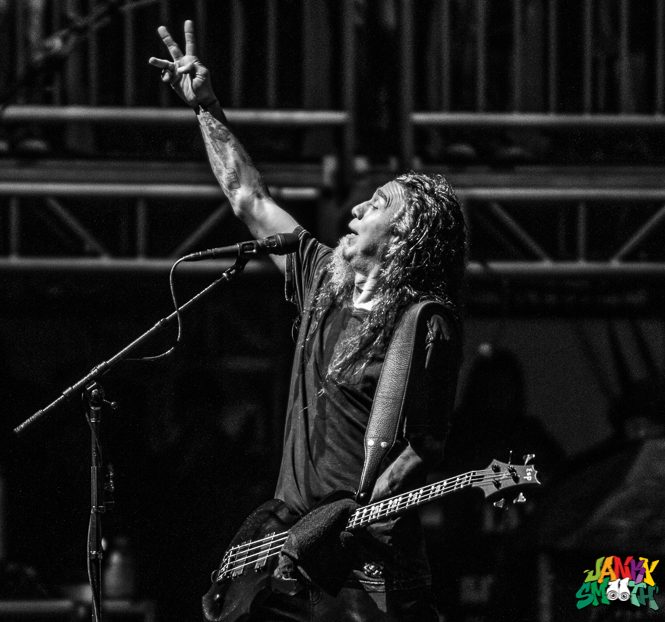 Seeing Slayer from the front of the crowd is the most violent live music experience you can gamble your life on. And I’m not exaggerating, the risk is real, tangible. Most music bloggers covering this show didn’t choose to stand where I stood, inching forward with the crowd with some kind of unconscious death wish; probably because most music bloggers have more to lose. To sum up what a Slayer show that close to the band is like, I’ll make a World War II reference like the band does on the song “Angel of Death”, their closer of the night.

The front row of a Slayer concert feels like being crammed into a train on its way to a death camp, only a band is playing.

Everyone is squeezed so tightly into each other that they can’t move. There’s no step you can take back, forward, to the right or left, that could give your body any relief. You’re lucky if you can move your arms. Then suddenly, you’re violently pushed in every direction, colliding with the bodies beside you and falling into them but not falling over, if you’re lucky and God forbid you do, because those that fell were inevitably trampled. I could feel some people falling over directly behind me, they grabbed onto my denim jacket for dear life trying to pull themselves back up while simultaneously pulling me down with them. I chose to be callous and self serving at this moment, not letting them drag me into hell with them. And there was something disgustingly human about this, that a concert put me in the position to have to choose between saving myself and others, where saving my self was the rational choice to make.

related content: Morbid Angel at The Regent: A Lesson In Death 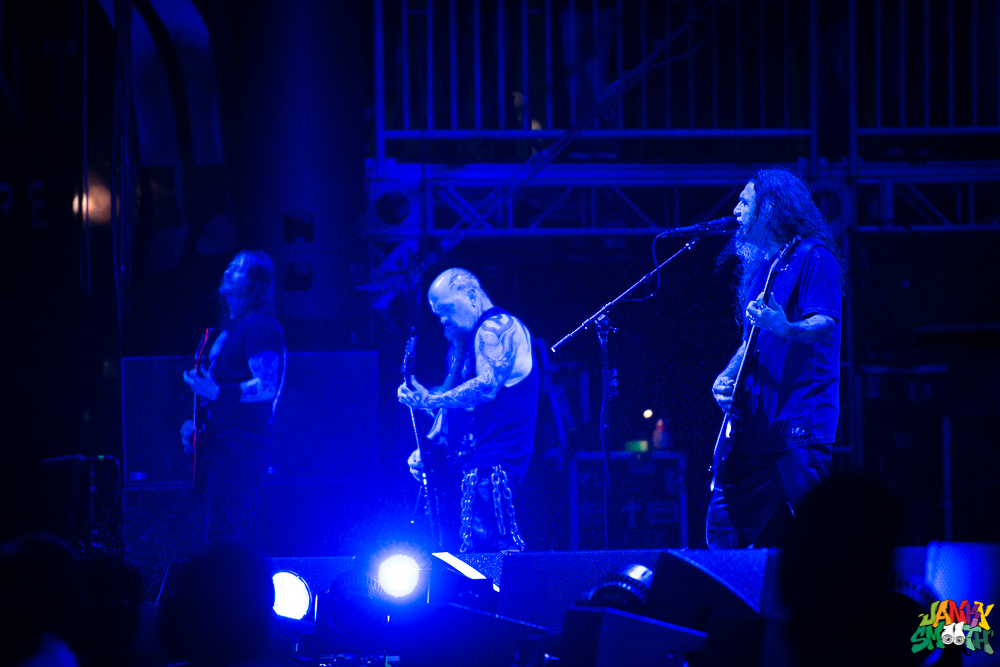 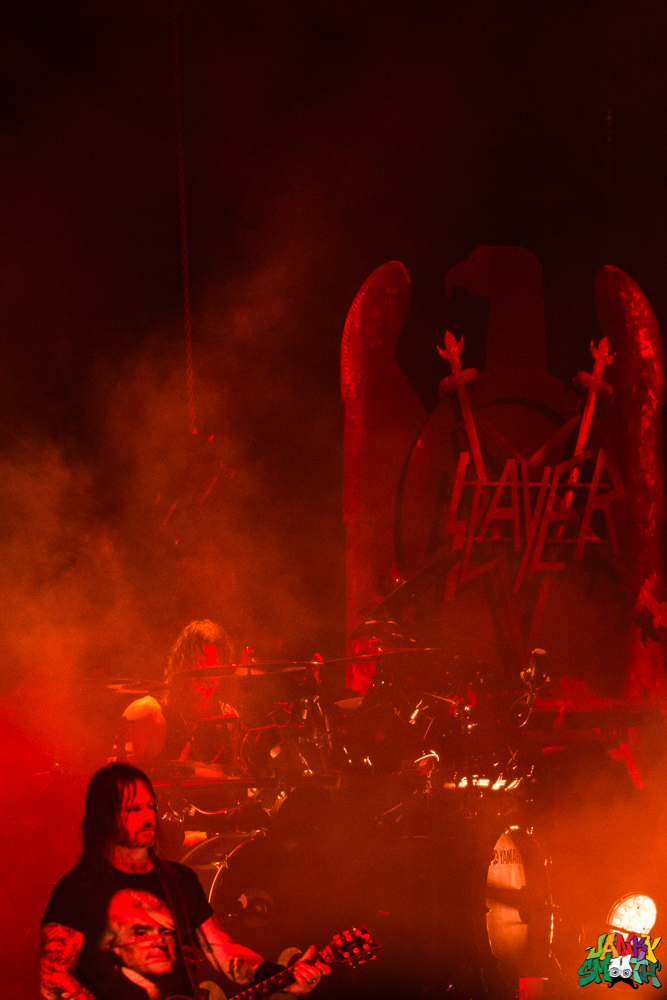 I’d see the fallen fans lying on the ground with their eyes looking up at the sky, exhausted and hopeless. People tried to pull them back up but their efforts were thwarted by further pushing from the rudderless crowd, like drowning men getting hit by waves every time they tried to reach the surface. I looked at the faces of those that were down and could imagine their mothers screaming their names and pleading for dear life that they get back up. Then as we all stood in circles around these gaps in the pit where the fallen were left to lay, more people would fall on top of them, crushing them. Sometimes, crowd-surfers would aimlessly land on top of them from at least six feet above and grind their bones into the soil upon impact.

During “Dead Skin Mask”; one of my favorite songs by the band, about serial killer Ed Gein, who fashioned clothing out of the flesh of victims that he’d sew together after fucking their corpses; I saw a good friend right beside me in the pit, one that I didn’t know was attending the show until seeing him. We hugged each other firmly as if reveling in the happenstance of friendship existing in a wretched hell as foul as this one. We were like brothers in arms reuniting in a fox-hole. He then asked me if I could help lift him up to crowd-surf to the front and out of the foray. I explained I was going back, through the masses to do the same and his response was “the only way out is up.” I fucked up and only ended up choking him in my attempt to get him to safety. 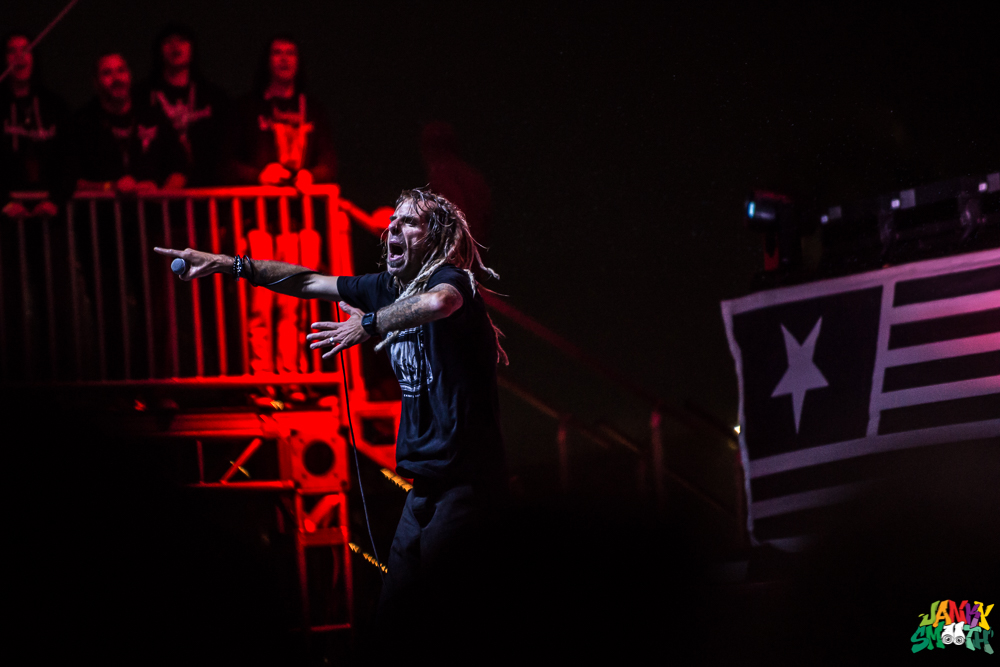 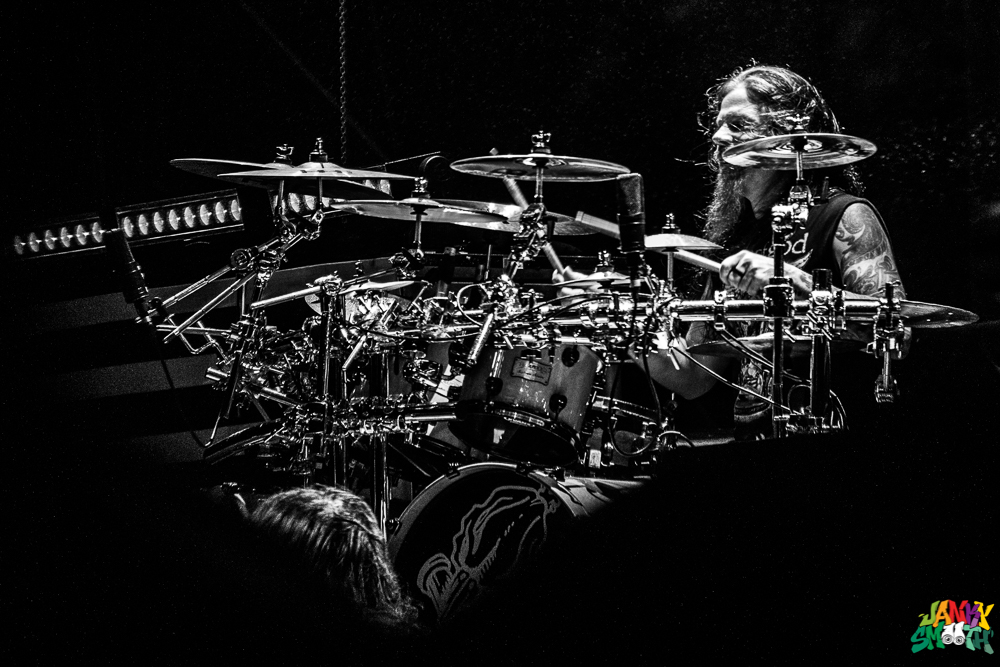 Chris Adler of Lamb Of God 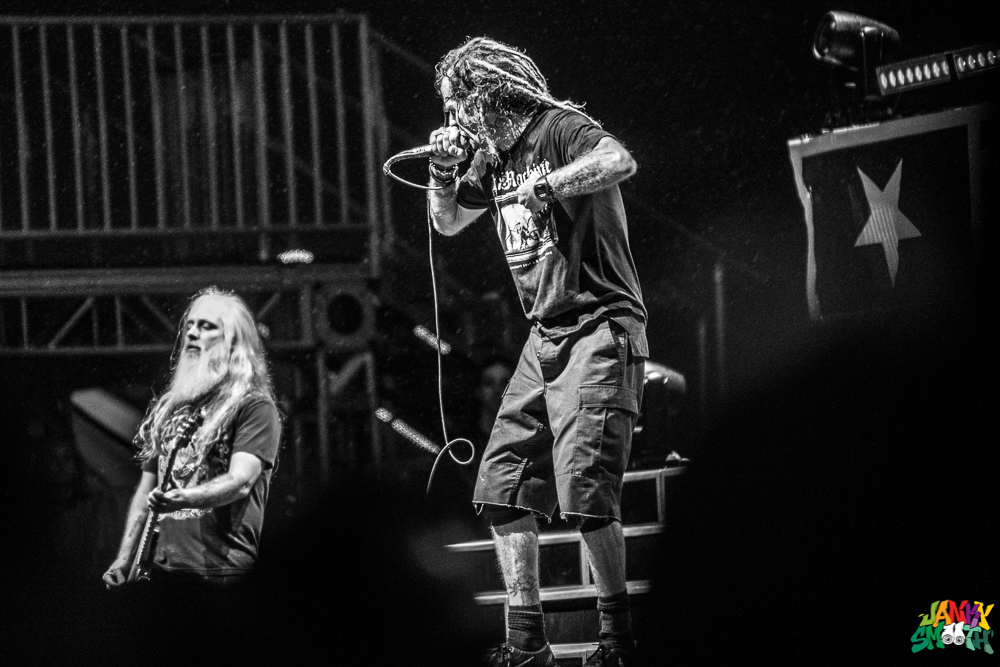 I was able to escape the “sea of violence” much like the survivor of a shipwreck. I was covered in sweat and actual piss from a full water bottle someone had thrown that exploded all over me and a few others. That’s right, I’m not ashamed to admit it. My face, my lips, even my phone got covered in a stranger’s warm piss and I still worry that it came out of some herpetic cock and now a virus is lying dormant inside me waiting to ruin my life. 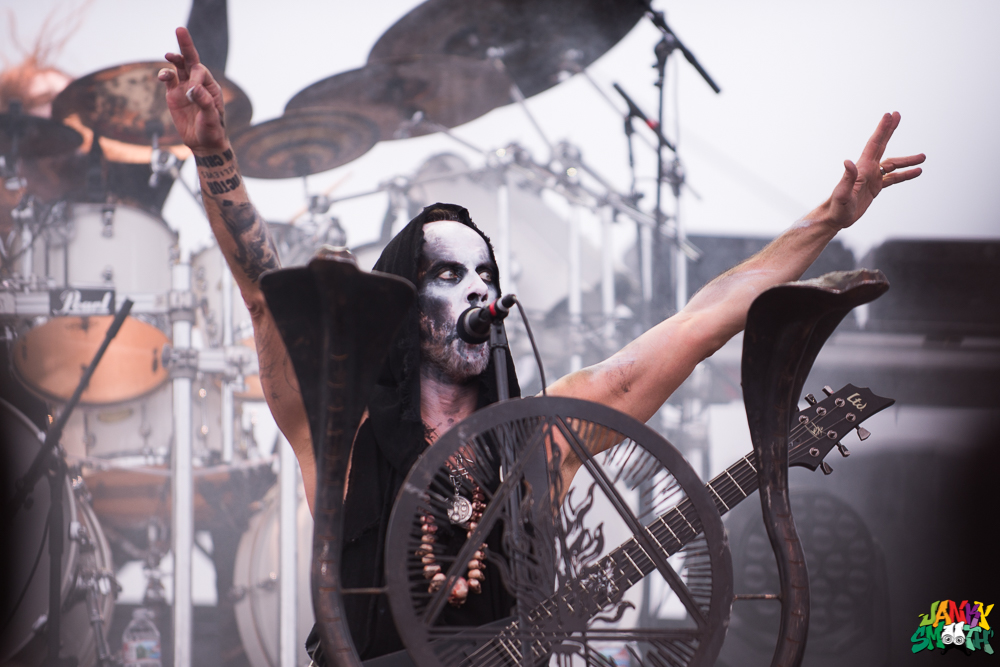 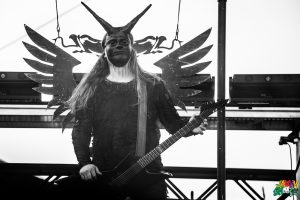 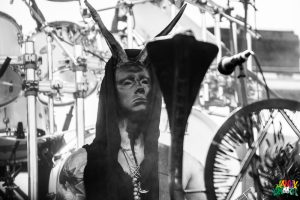 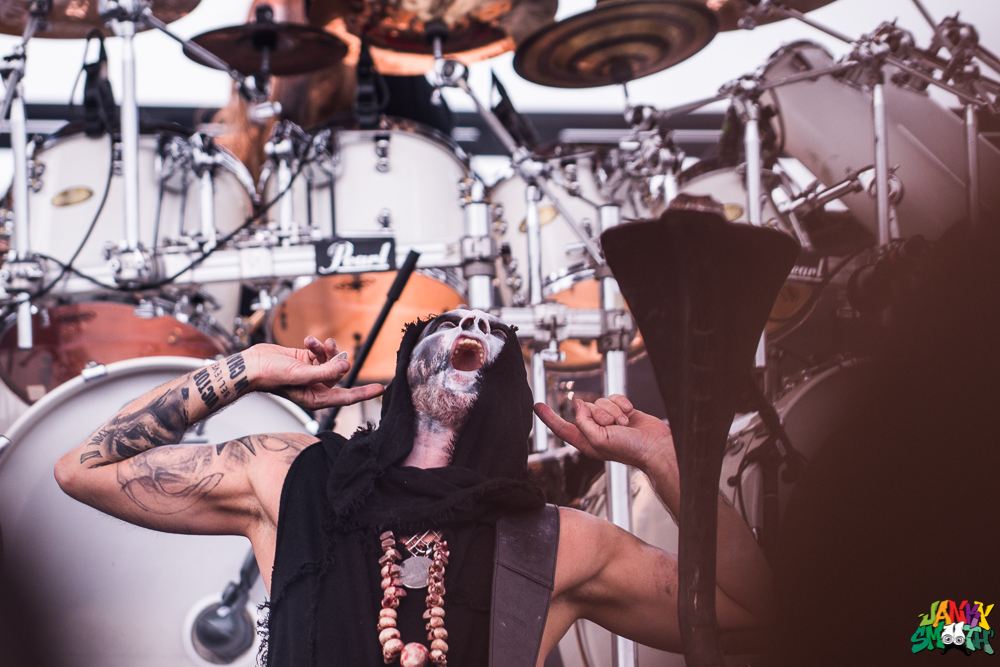 I stood back, hoping to find a drink to quench my thirst but at that point all the vendors were closed. I just had to suffer through this state I had put myself in and by this point the concert felt like the dizzying, lucid debasing feeling someone must have after getting their fingernails pulled out.

All that said, I thoroughly enjoyed the show.

I’ve been wearing Slayer shirts since I was in middle school. I still remember watching “Live Intrusion” on VHS and marveling at how insane the show looked. My first time seeing the band was at an Unholy Alliance show in Long Beach with Mastodon, Lamb of God, and Children of Bodom. This same “sea of violence” phenomenon happened there and I fell and sprained both wrists then my elbow. The next time I saw them was at The Big 4 in Coachella Valley where Jeff Hanneman played with the band for the last time. For some die hard metal heads, this was actually the last Slayer show but I respect Tom Araya and Kerry King too much to share that sentiment.

related content: Dusk At Midnight: Converge At The Regent

Paul Bostaph and Gary Holt were on fire with their playing, as were Kerry and Tom. Some of the songs that really shined in their set were “Repentless” (their opener), “Disciple”, “Mandatory Suicide”, “War Ensemble”, “Black Magic”, “Seasons In The Abyss”, “Postmortem”, “Dittohead”, “Dead Skin Mask”, “Hell Awaits”, “South of Heaven”, “Raining Blood”, “Chemical Warfare”, and “Angel of Death”. That’s all the songs on their set but four. Songs like “Hate Worldwide”, “Payback”, “Jihad”, and “When The Stillness Comes” are enjoyable but for Slayer’s last tour there were others we had all wished to hear, setlist staples from different eras of the band like “The Antichrist”, “Killing Fields”, “213”, “At Dawn They Sleep”, “Criminally Insane”, “Silent Scream”, etc…. 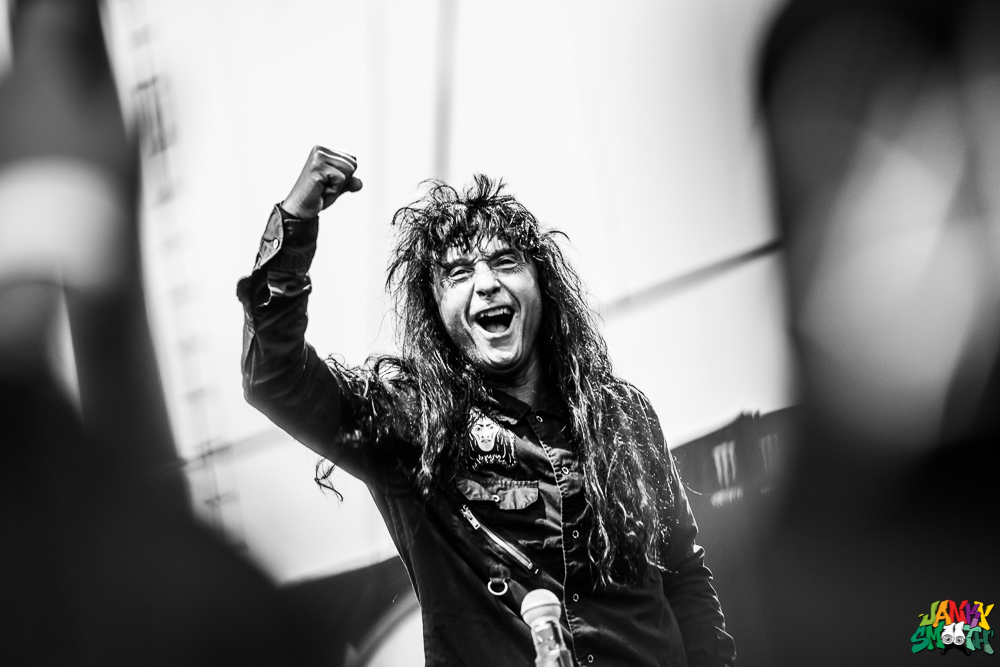 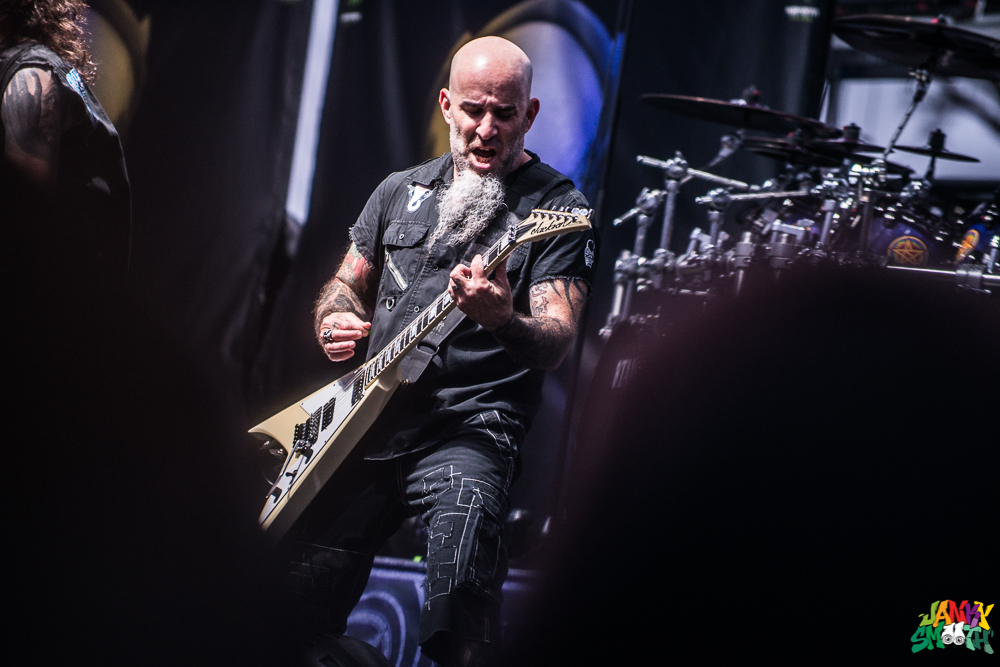 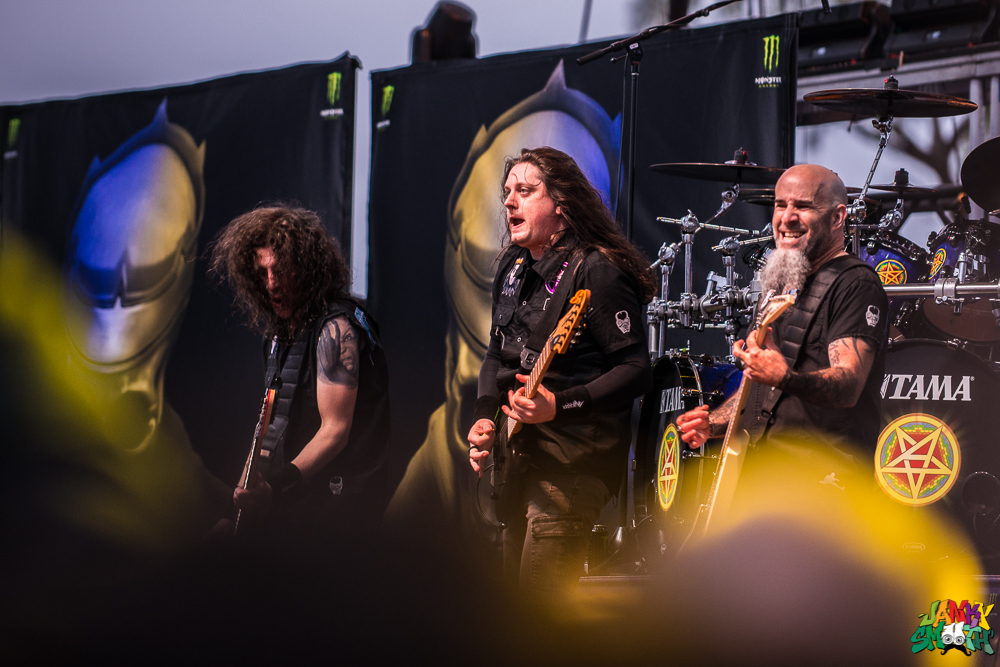 After the concert had finished, Tom Araya was alone on stage to thank us and got a little choked up looking out at the crowd of Californians. Our state had created the band back when they were called “Dragonslayer” and molded them into what is for my money, the greatest metal band of all time. Better than Metallica and as far as what I listen to regularly, better than Sabbath. Slayer inspired every extreme metal genre by being the first to use such graphic lyrics. Also, I think part of the function of metal is recreate evil in your music and that’s what Slayer’s always consistently done, is make a soundtrack for some imaginary ride through hell itself.

It was incredible to see a chapter in metal music be closed forever. I had to let a piece of me get taken away to really get the full experience.

I could go on about all the other bands that played that day. They were all amazing. I could talk about how Testament brought the most intense headbanging classic thrash or how Behemoth made the day feel like night with cinematic and satanic black metal that had plenty of groove to it. Nergal was especially mesmerizing with magic in every movement as Behemoth’s lead singer. Anthrax was incredible as usual, playing all their fan-favorite songs even though I wish they’d bring back “I’m The Man”. Lastly, mostly everyone thought Lamb of God was amazing while I thought they were just okay. I don’t know how people can think they’re better than Anthrax but I guess plenty did. 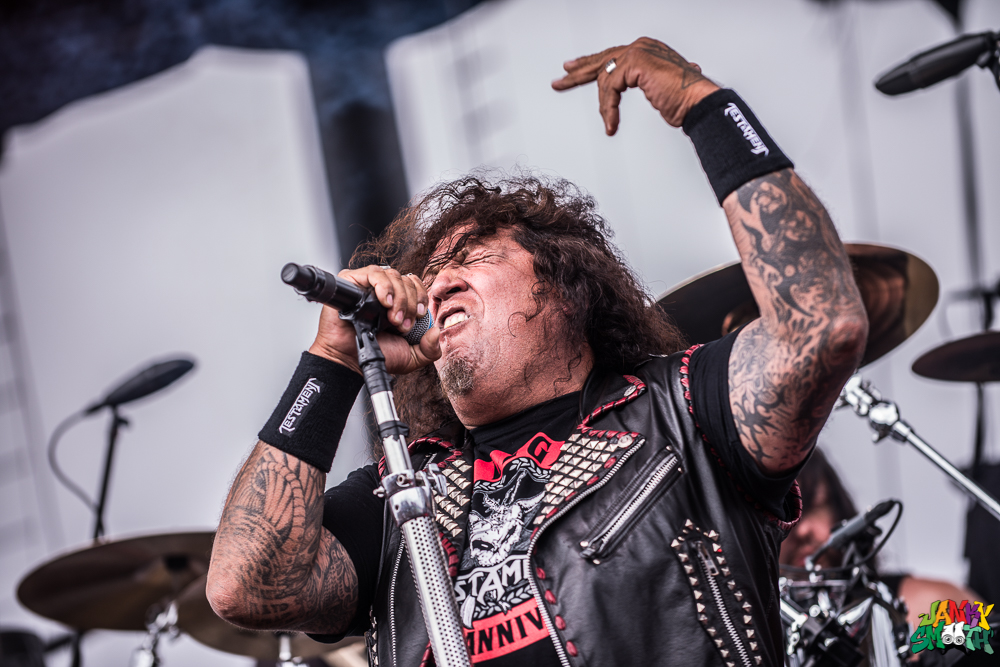 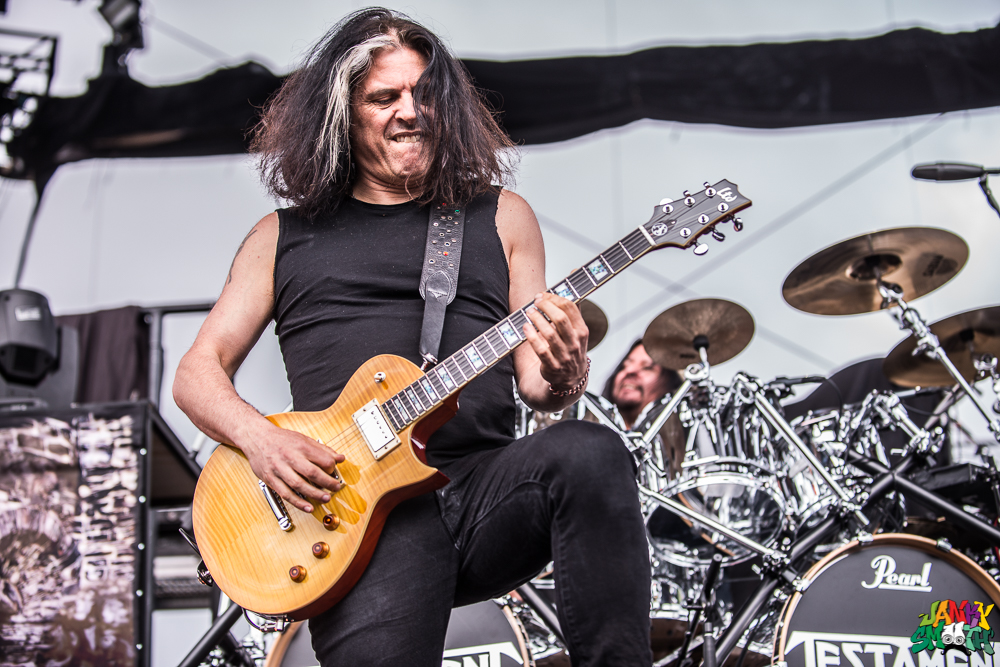 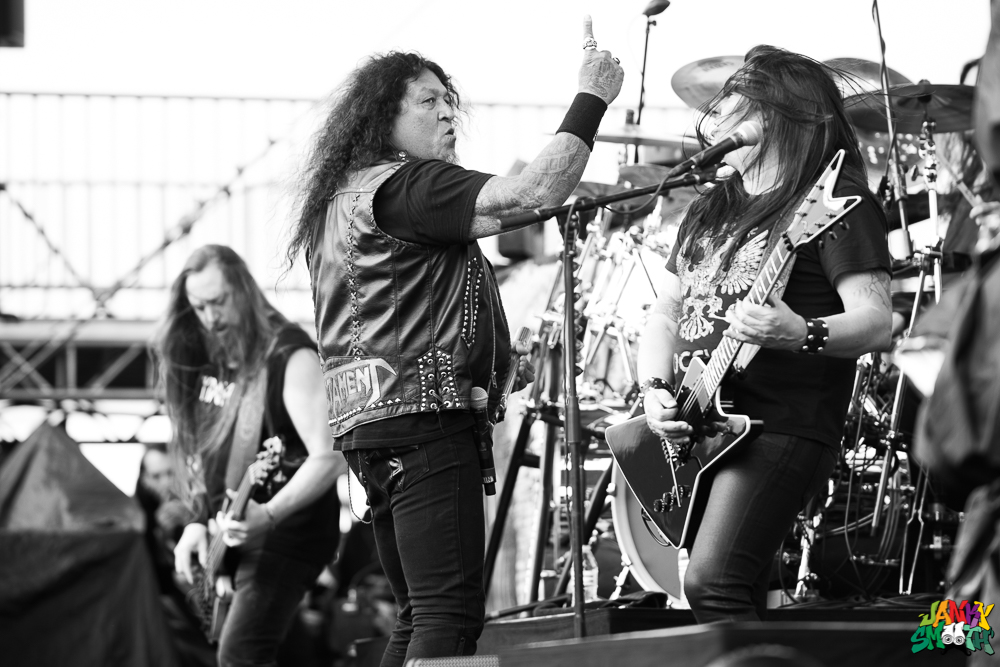 And just so I don’t end on that note: