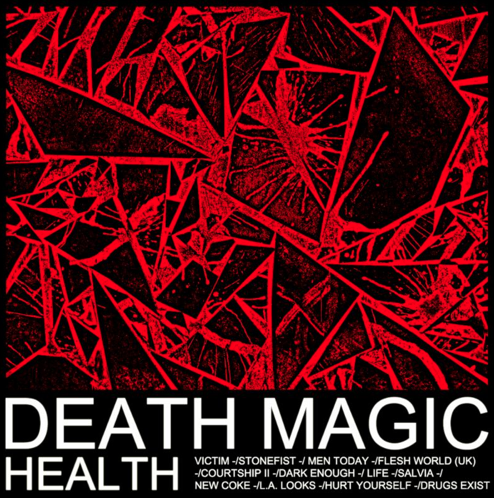 Los Angeles’s own, HEALTH and their new album, Death Magic released by Loma Vista on August 7th might very well be my top record of 2015, thus far. Even with a more polished, less noise influenced battery of songs, HEALTH manage to keep that dark edge that mixes beauty with taboo concepts of the human condition and is delivered to fans in their familiar package of abstract messaging.

There seems to be a formula developing in the nebulous vacuum that was once the music industry. It’s really not all that different than what existed previously. The previewing of new singles in the months leading up to an album release isn’t an original concept. There is just a greater volume of them, which has allowed fans to hear more of an album before it’s official release. That is, if there isn’t a strategy to “leak” the album. There was a very calculated build up to the release of Death Magic and a real attempt to control the message of music critics, which is a departure from the typical, laissez faire vibe of HEALTH. Death Magic successfully manages to cut the chord in the eternal association between HEALTH and Crystal Castles, not just because CC has ceased to exist in it’s most beloved incarnation but because HEALTH has the potential to go beyond the popularity of CC with the material contained within Death Magic.

On April 24th, the band and it’s “people” dropped the video for “New Coke” which insisted that “Life is Good”. The video contained elements that were very pleasing to hardcore fans of HEALTH including cameo’s by Alice Glass and Pictureplane, super slo mo shots of Jupiter and Jake vomiting in a public restroom and an offering to anyone- “If you need to talk” which included John’s cell number. It was his real number, as confirmed through the comment section by giggling fans on YouTube. It reiterated a previous command from the band that comes off both cynical and hopeful- “You Will Love Each Other”.

The track “Stonefist” launches with a grinding, almost industrial sound that gives way to a very melodic, new wave/dark wave verse. It strikes an amazing balance between fist pumping and swaying. A video for the song was released yesterday, Aug 13th and as usual, features some NSFW concepts and imagery. In this case, a plastic surgery theme along with the chorus, “Love’s Not In Our Hearts”.

It’s not that Death Magic is all that different from previous HEALTH albums. They just focus more on certain aspects of melody and structure than in previous releases. That being said, there are still a handful of tracks like “Courtship II”, (a sequel to Courtship off their self titled debut and Courtship Dating, as remixed by Crystal Castles) that tap into the rhythmic, syncopated chaos and noise that are synonymous with HEALTH.

Death Magic shines from front to back with two of my favorite tracks coming on the back end of the album. Both “L.A. Looks” and “Drugs Excist” feature hypnotic sound design and rhythm and might be the tracks I’ve played most consistently.

HEALTH also remains to be a “can’t miss” live act.  I almost forgot how goood they were since they failed to play a hometown show for almost 3 years. After seeing them play 2 out of 3 consecutive nights at their residency at The Echo, I was reminded that an electronic based band that is as good as HEALTH is live is extremely hard to find.

Music is mood. The mood starts with human emotion. Human emotion leads to artistic inspiration. Artistic inspiration leads to art. Art connects to people and taps into their joy and suffering which completes the mood cycle between the consumer of art and the artist. Successful art makes it’s perceiver feel the way the artist felt when creating it. The way HEALTH builds mood is nothing short of artistic genius. It taps into a goth-like depression that is as desperate as it is hopeful. I would be remiss to not mention the contribution of the entire band as a unit but Jupiter’s sound design and his talent as a producer has reached the next level on this album and along with Jake Duzik’s vocals, they are able to create brooding dance moves out of dissonant notes and unrelenting beats and rhythm.