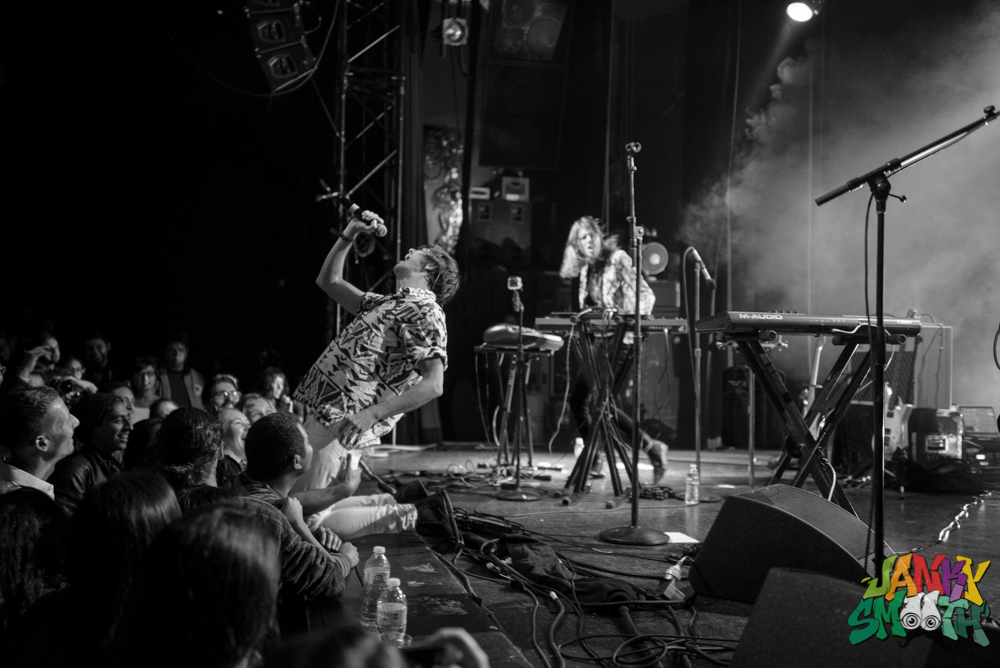 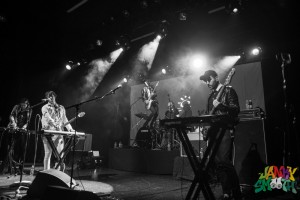 It was a Wednesday evening and after a day of uni, interviewing a band, and transcribing that interview, the last thing I wanted to do was go to an overly positive, hyperactive pop show. Exhaustion and trepidation aside, I decided to head to the El Rey Theater to see Melbourne-based four piece, Miami Horror play alongside Slow Hands and Queen Magic. With the promise of Red Bull + vodkas compliments of Taylor Wong, and the knowledge that Australians like to have a good time, I figured what was the worst that could happen? Answer: I could walk into an (almost) empty venue and lose all motivation for wanting to be there.

The beautiful El Rey theater had minimal stragglers roaming about and a few individuals even occupied the idea of sitting on the dance floor. In all fairness, we did show up before the first act went on, and very seldom do opening acts get the love they deserve, but still, the vast emptiness of the room set the precedent for what I thought was going to be an extremely dull evening. 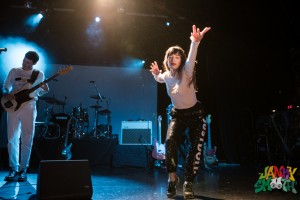 Queen Magic (also Melbourne based), who strikingly reminded me of Freddy Mercury (it may have just been the stache and the all white get up) was first to take the stage. His sound was simplistic, yet impressive, with resonance of synth and a bass line. His baby-making music infused with RnB vocals was very similar to the likes of How to Dress Well. Big ups to Queen Magic for diminishing the pessimist in me that was so abundantly active that evening. 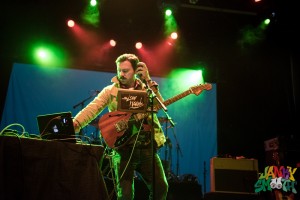 Next up was Slow Hands, and what an appropriate name! Slow Hands is the sort of music that could easily serve as chill out tunes amongst friends, and seemed inappropriate as an opening act for an ebullient band such as Miami Horror. The perennial synth got lost in the ether of the room and would have been better suited in a strobe lit vicinity at the end of a music festival where all the kids who took too much acid flock to. At this point, I made my way to the lounge upstairs and had a long chat with a lovely, gay bartender. admittedly, Slow Hands was the perfect back track for an in-depth conversation between two strangers exchanging drunken stories about how much boys suck (just kidding. Kind of). After what was seemingly an infinite amount of time, Miami Horror finally took to the stage. 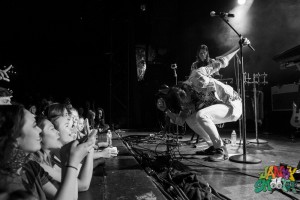 The quartet opened with the simplistic and shoe gaze-y introduction of “American Dream”, which had diminished all of my pre-conceived notions of them being just another sugar pop, electro band. And then it happened, 45 seconds in I heard the synth increase and I thought to myself FUCK. In an instant, the tempo had abruptly escalated, and vocalist Aaron Shanahan was bouncing in circles to the beat of the tune. It was like my overly enthusiastic Aunt Kathy trying to give me relationship advice after a breakup, it was that friend who suggested the Overpass when you’re just trying to Netflix and chill… simply put – it was not what I was ready for. 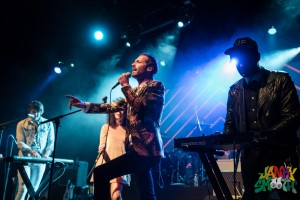 The moment in which two drunk Australians directly behind me chanted “Aussie aussie aussie” a possessed “Oi oi oi” inadvertently came out of me in reply. I had no choice but to give in. Nostalgia was occurring in full force upon hearing the Australian accents and the upbeat tunes that I’ve abandoned for years. Songs like “Wild Motion” instantaneously conjured the memories of being on road trips with friends. While psychedelic songs such as “Illuminated”, from their 2010 album, brought me back to lying on my bedroom floor with a bottle of wine and too many thoughts. Though they display diversity in their music, they are still best known for their discernible disco-funk, nu-wave sound that I experienced first hand, is difficult to hate. Their music is like ordering a tuna sandwich at the deli – its so damn good, but nobody really wants to admit it. Their tracks “Cellophane” and “Love Like Mine” were enhanced when a petite girl with a powerful voice, by the name of Gavin Turek accompanied the band. Adorned in a velvet dress and boots, with an oversized, impressively natural afro, her ephemeral vocals heightened the funky vibe that was already in existence. The energy in the room was heightened when Shanahan decided to jump into the crowd. Standing in the front row in observance of the musicians on the stage, I felt someone push me to the side, only to realize it was Shanahan making his way back up. The personable experience of active crowd engagement, made me appreciate their live performance that much more. As all four members boisterously moved behind their instruments, I noticed the crowd had become just as animated. As balancing acts between amps occurred onstage, the audience cut rugs on the dance floor. There was an impressive fluidity about their transitions into songs, not allowing any lackadaisical moments. 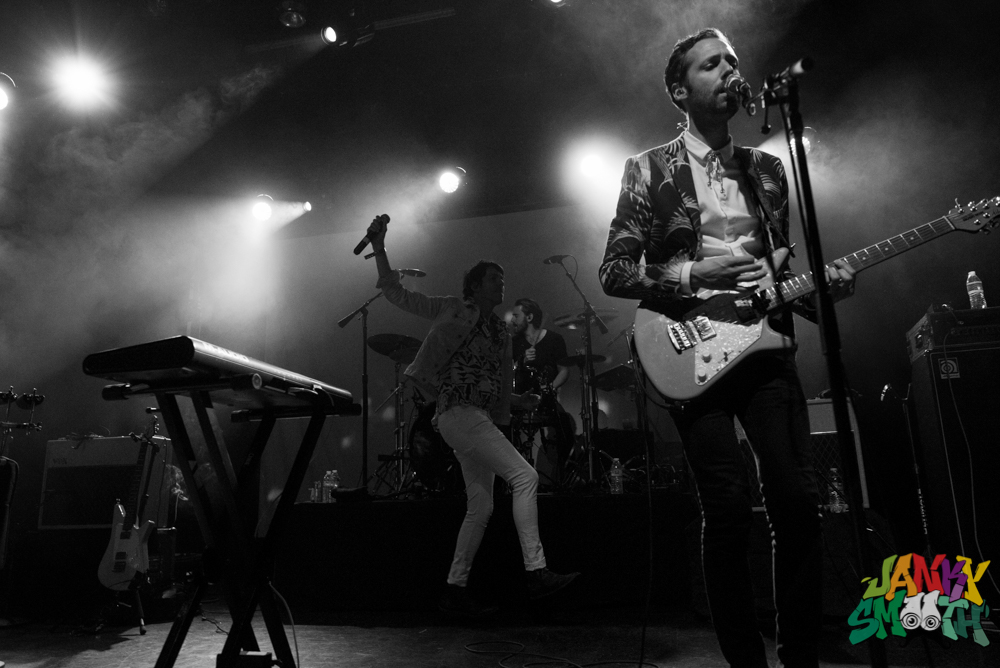 Their music is nothing less than feel good vibes, synonymous with hot days by the pool, which is why their lengthy one hour, 15 songs, 2015 album release was so timely in being released with the northern hemisphere’s Summer. Though their music is undoubtedly the product of miscellaneously blended influences, they do still sound rather mainstream- their track “Sometimes” featured in Grand Theft Auto V and I’m certain one of their songs has been blasted through the speakers of an Urban Outfitters, at some point. Even if their sugar pop, dance infused music isn’t punk enough for you (me), surely after attending one of their high-energy shows, even the coolest of kids could become a Miami Horror convert. I would know, I’m speaking from experience (that’s not to suggest that I’m one of the coolest kids). I definitely felt myself resisting the urge to admit I actually enjoyed the type of music I once heard spinning at places like club Moscow circa 2010; but even the greatest cynic would find a new appreciation for Miami Horror after seeing one of their live performances.