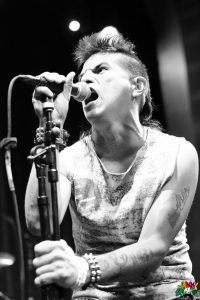 Anarchism and Anti-Fascism seem to have found a new seat, front and far-left-of-center, in the public forum. That seat is occupied by the political movement that has adopted those principals in the fight against Donald Trump known as ANTIFA. Their highly publicized clashes with the far-right might be what’s making news these days but if you know their ideology, one has to see its parallels with Crust Punk. The value system professed by many of ANTIFA’s members are rooted in the deconstruction of the “male dominator system” that is the basis of civilization as we know it. Monogamy, capitalism, binary gender, racial hierarchy, monotheism (especially in the Christ variety), and more, traditions most baby anarchists are born into, are all part of the “male dominator system”. Breaking away from the values you are born into is often a violent experience and what’s left of you after the fact, might just be a person damaged enough to become a crust punk. If you accept your crusthood, the proper thing to do is drop out (of life), never shower, and hop on the next train going nowhere. So what’s the difference between ANTIFA and crust punk culture? On the surface, it’s really just the label, the clothing, and politics over music. ANTIFA members wear black bandanas and hoods, while Crust Punks wear battle jackets covered in spikes, embroidered patches, and keep their hair dreaded and well-oiled with patchouli. You better believe that the audience that came through to Doom‘s sold out and rare August 23rd Regent Theater appearance, will be chucking molotov’s right beside ANTIFA when the shit finally hits the fan.

If you want to see a Crust show, good luck finding anything that’s not in an East L.A. backyard. That’s why, the moment I stepped into the Regent in the middle of Apocalypse‘s opening set, a smile grew across my face from ear to ear. I was at a real crust show… finally.

Strewn over the stage wall was a poster that read in Crass-anarcho font: “Human Race Not Arms Race. Out Lives Not Bombs.” Peace never sounded so punishing, as Apocalypse played crusty, aggressive punk riffs over thundering drums and bass, with vocals that shredded through the music like a serrated knife, sounding like Max Cavalera‘s Sepultura days. 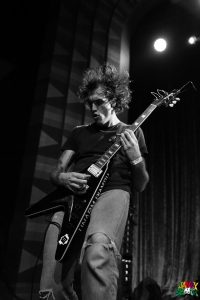 Blazing Eye was next, a band Danny B has been championing for a bit, and I can see why. Standing right before the stage, I was pleased to learn the band employs the talents of none other than hardcore jack-of-all-trades, Sam Bosson on guitar. And the guitar is one of the most pronounced and idiosyncratic elements of the band. It’s not exactly crusty but it sure ain’t clean, distorted isn’t the right word either, it sounds mutilated… twisted. The singer, Austin Delgadillo‘s intensity cannot be overstated, he stamps and skanks the stage in black biker boots and induces you to the brink of lawlessness. Blazing Eye is the new wave of L.A. punk rock in the tradition of bands like Final Conflict or The Germs. And that’s what the scene needs, more smelly punk bands with liberty spikes and bullet belts, not punks that look and sound like hipsters. 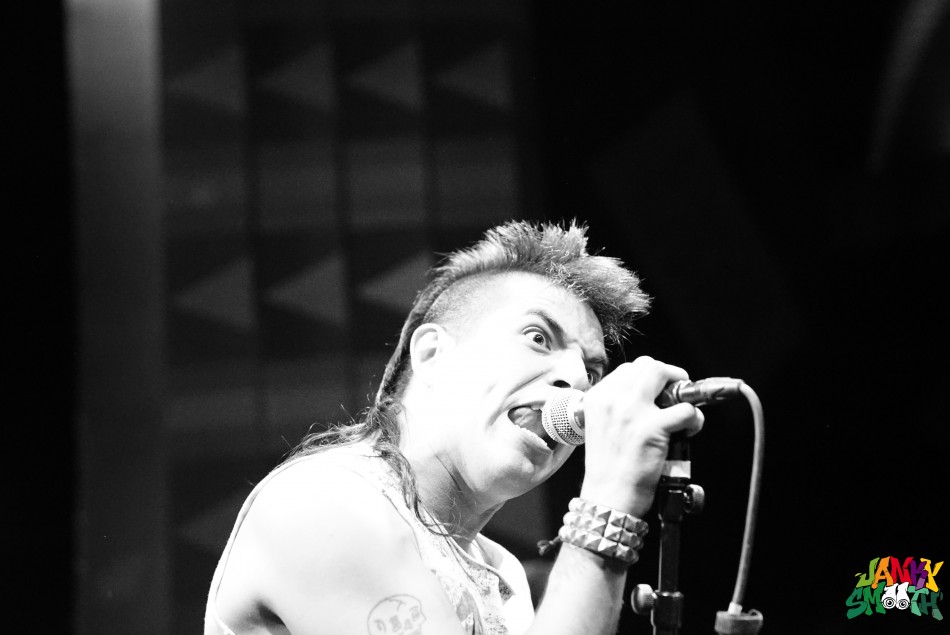 When I said big crust shows in L.A. are rare, the reason for that is because few bands in the genre can really draw and sell tickets for a major venue in this town. Of the three major bands in the genre, Amebix, Nausea (NYC), and Doom; Doom is the only band to remain playing. And to celebrate their 30 dirty years of playing crust, they decided to tour the states.

The band was introduced on stage with the Crass song/monologue Asylum, the lyrics to which make for one of the most blasphemous poems you can ever read:

I am no feeble Christ, not me.
He hangs in glib delight upon his cross, above my body.
Christ forgive…. Forgive?
I vomit for you Jesu. Shit forgive.
Down now from your cross.
Down now from your papal heights,
from that churlish suicide, petulant child.
Down from those pious heights, royal flag bearer, goat, billy.
I vomit for you. Forgive? Shit he forgives!
He hangs in crucified delight nailed to the extend of his vision,
his cross, his manhood, violence, guilt, sin.
He would nail my body upon his cross,
suicide visionary, death reveller, rake, rapist, life-fucker,
Jesu, earthmover, Christus, gravedigger.
You dug the pits of Auschwitz, the soil of Treblinka is your guilt,
your sin, master, master of gore, enigma.
You carry the standard of your oppression. Enola is your gaiety.
The bodies of Hiroshima are your delight …the nails are your only trinity,
hold them in your corpsey gracelessness, the image I have had to suffer.
The cross is the virgin body of womenhood that you defile.
You nail yourself to your own sin.
Lamearse Jesus calls me sister, there are no words for my contempt,
every woman is a cross in is filthy theology, in his arrogant delight.
He turns his back upon me in his fear, he dare not face me.
Fear-fucker. Share nothing you Christ, sterile, impotent, fuck-love prophet of death.
You are the ultimate pornography, in your cuntfear, cockfear, manfear, womanfear,
unfair, warfare, warfare, warfare, warfare, warfare, warfare, warfare, warfare.
Jesus died for his own sins, not mine.

I talk about Crass a lot in these articles… maybe too much, but I can’t tell you how good it felt to be at a concert where that band is as revered to the scene as they are to me.

Birmingham’s Doom came on stage and gave me a whole new definition of crust. Denis Boardman’s vocals were guttural growls that sounded just as crusty as Brian Talbot’s crunching guitars. Stick’s military style drumming and Scoot’s bounce-ridden bass gave their traditionally punk structured tunes an untraditional, extreme twang that could bring together fans of every genre from black metal to classic punk. Their was stage dives and moshing galore, at one point the audience crowd-surfed a trashcan that bludgeoned two people in the head. This was the most punk looking audience of any show I’ve been to this year. I saw one guy sporting an Anal Cunt tattoo on his arm and suddenly, I felt really good about all the choices I’ve made in my life. 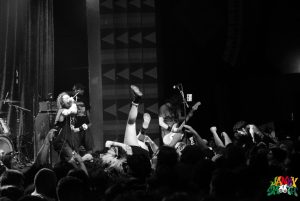 One textbook anarcho moment occurred when Denis asked the crowd “who smokes?” and pantomimed smoking a cigarette. His reply to the audience’s mixed answers was then “SMOKING’S FOR FUCKING NAZIS!” So Trump supporters, progressives, and smokers… nazis, nazis, nazis, GOT IT! One of the cool things about Doom is that you can wear a Doom shirt with a swastika on it and everyone’ll know you’re not a nazi. Another cool moment was when the band played one of their greatest hits “Police Bastard” and introduced it with “Fuck the police, coming straight from the underground!”

I can’t tell you how cool this experience was for me… it was like when in Good Will Hunting Robin Williams rants about how Will knows everything about the Renaissance but didn’t know anything real, like the smell of the Sistine Chapel… so, then if Will were to actually visit the Sistine Chapel, that’s how seeing Doom was for me. I knew plenty about crust from being a music nerd but until I saw Doom, I realized I knew nothing and that my real education was only beginning. 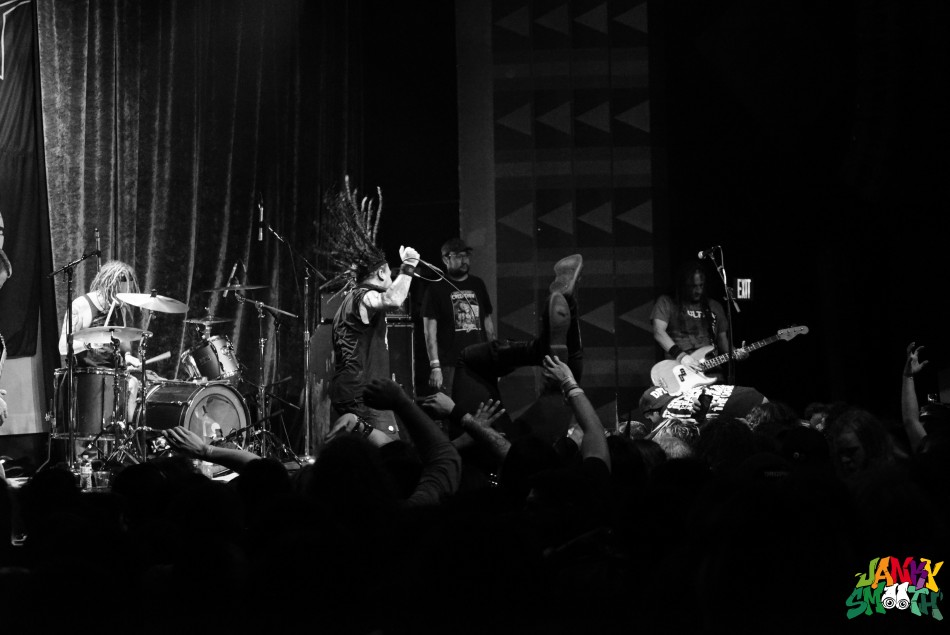