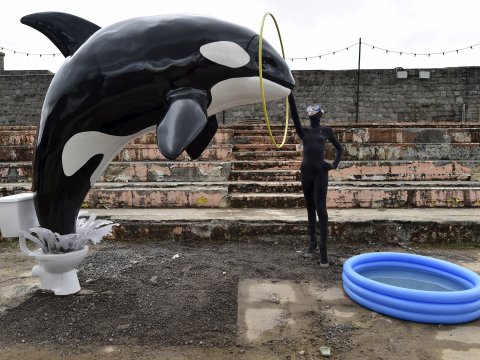 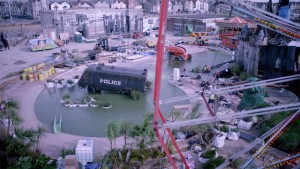 Whether we’re working retail or stumbling out of bed to make it to class (or both), it’s obvious that summer’s over.

Some of us are bummed out, longing for those poolside tunes (and drinks), and pensively reminiscing about our summer hook-ups as we drive down the boulevard blasting either the cover of “Boys Of Summer” by The Ataris or Lana Del Rey’s “Summertime Sadness” out the windows.

While others of us may still be swearing and spitting at this goddamn fucking heat (and if you’re like me, you’re ravenously ushering in an early autumn with midnight magic spells in black-hooded cloaks, early morning rain dances in the nude, and animal sacrifices using the neighbor’s pets—you know the one, always barks at dawn in between trash pickups).

Whichever side of the spectrum we’re on, we can all get a kick out of the ‘commercial’ for Banksy’s Dismaland in Somerset, England; along with a last (and rather gothic) taste of summer in this foul year of our lord—Two-Thousand & Fifteen.

In the spirit of Dismaland’s dystopic commentary on our modern, and nightmarishly globalized mega-culture of oil spills, the refugee crisis, domestic abuse, abusive banking institutions, ramped up police states, or the psychopathic business model of the paparazzi, we’ll also get the chance to reflect on all the socio-political horrors that drifted by in the undercurrent of our BBQs, house parties, and beach trips.

Dismaland instantly made me think of 2013’s Escape from Tomorrow. Director Randy Moore’s guerilla tactics of shooting an entire film in the Disney World theme park is not unlike Banksy’s usual modus operandi. Banksy shot a scene in one of the parks for Exit Through the Gift Shop with collaborator-in-crime Mr. Brainwash, and they were even detained before leaving. Moore was quoted in the L.A. Times as saying:

Those of us who grew up in California know the hells & highs of going to Disneyland with our family. And hey, who are we kidding? Since we still constantly go with our friends and beaus well into adulthood—and even hold season passes we have no business paying for—we’re obviously still taken by the sadomasochistic glee that goes along with everything about being a Disneyland regular. (The #ManBunsofDisneyland posts are definitely new editions to the theme park experience.)

I personally know the entire park like I know the back end of a Dodge Challenger. I also, like many of us, know about Disney’s underbelly; whether it’s subliminal sex organs on classic cartoon movie posters, the not-so-subtle anti-Semitic sentiments, or Ryan Gosling’s revelation on Conan that the park unleashes an army of cats onto its rodent population during afterhours.

So, what is it that keeps us coming back over and over and over again? Is it that dichotomy at play? Would we love Disneyland if its intrigue merely stopped at the surface, with nothing hiding behind Mickey’s smiling face? Or does its thorny legacy—comprised of all shades of good and evil—frustrate our logical adult brain, and pique our suppressed, childlike curiosity? It’s as if we’re all trying to subconsciously locate the rip in Disney’s hardline curtain of magical perfectionism (the Nazis dug perfection too). We somehow sense the underbelly, even if we can’t see, smell, taste, hear, or touch it.

Banksy and his collaboration with over 50 artists have effectively slashed the curtain for us, and are only charging Brits £3 a ticket for a glimpse into the other side of the looking glass. Perhaps, though, what we’re really looking at, or even for, is ourselves—and what we’re complicit to. Don’t worry, I’m not about to soapbox anything, the art speaks for itself.

But even though it’s in Englad, we’re definitely feeling it here on the West Coast—the outer edge of the Free World. I wish we Californians could experience Dismaland IRL. I think we’d be, after all, its best customers. Hell, Banksy could even expand and put in a multilevel parking garage, charge $17 per car, and most of us would get season passes.