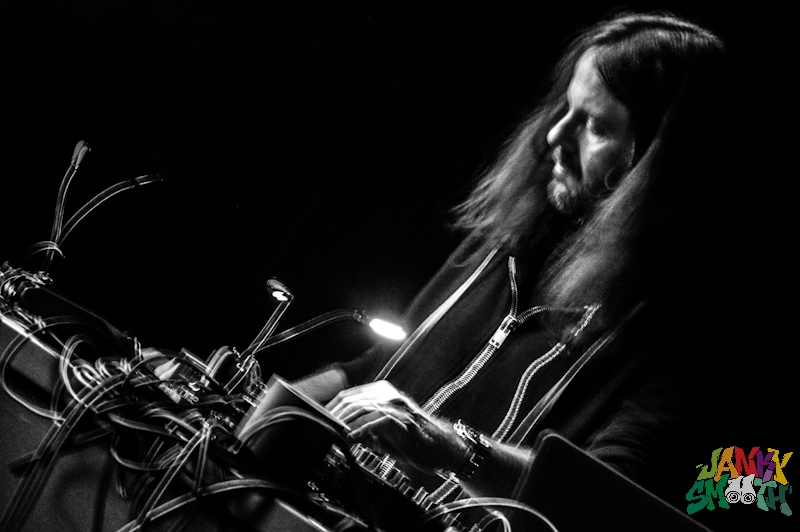 Noise shows might just become my favorite kind of shows. You have to go sparingly to keep the experience special but when you do attend, these sonic experiments have the ability to melt your consciousness into a putty then sculpt it however the artist sees fit, using only sound as their utensils.

This is what I anticipated from Alessandro Cortini‘s Lodge Room show. A set that felt somewhat ambient, somewhat harsh, with sounds that would make the room vibrate with heaviness but also make the soul hum with lushness. I received every range of feeling on this night, from both what I brought to the music and what the music delivered to me.  The one quality this music exhibited that I found most compelling was its etherial nature. Goth music’s gravitation toward the angelic and heavenly is a curiosity of sorts. You’d think people dressing in black all the time would want something less affirming of the divine, but as it so happens, sorrow might grant you a closer relationship to grace. The night began with Olive Kimoto stirring the souls in the holy Lodge Room with animated electronics and vocals like the mythological siren. Drawing in the soul for an out of body experience, vibrant colors would warm, cool, buzz, and surge during her set and gave everyone the feeling of psilocybin spores floating through the air. This is a voice that belongs in movie soundtracks. Byron Westbrook delivered exactly what I was hoping for from the night. I want to see a bunch of electronics on a table with wires poking out that you can insert and unplug to conjure and manipulate sounds you would never hear at a concert otherwise. Byron’s set incorperated much more rhythm than you’d usually hear at noise or ambient shows, with a healthy dose of world music as inspiration. Hot off the heels of his latest album, VOLUME MASSIMO, Italian multi-instrumentalist, noise artist, and Nine Inch Nails alumni, Alessandro Cortini booked the perfect venue to foster his live show. As every electronic note stretched, so would your soul. The music would make you feel giant at times, small at others. All the while, you’d be watching art-house cinema of interpretive dance and geometric shapes play on screen. These films would supply non-verbal messaging that spoke just as clearly as Alessandro’s music. Sometimes you don’t need lyrics to say exactly what’s in your heart and what Alessandro had to say about human connection through his sound and visuals felt spot on. It’s amazing how when in the hands of such a talented artist, electronics can make you experience the vastness of your own humanity. In this sense, Alessandro’s music acted as a reflection of our own consciousness.