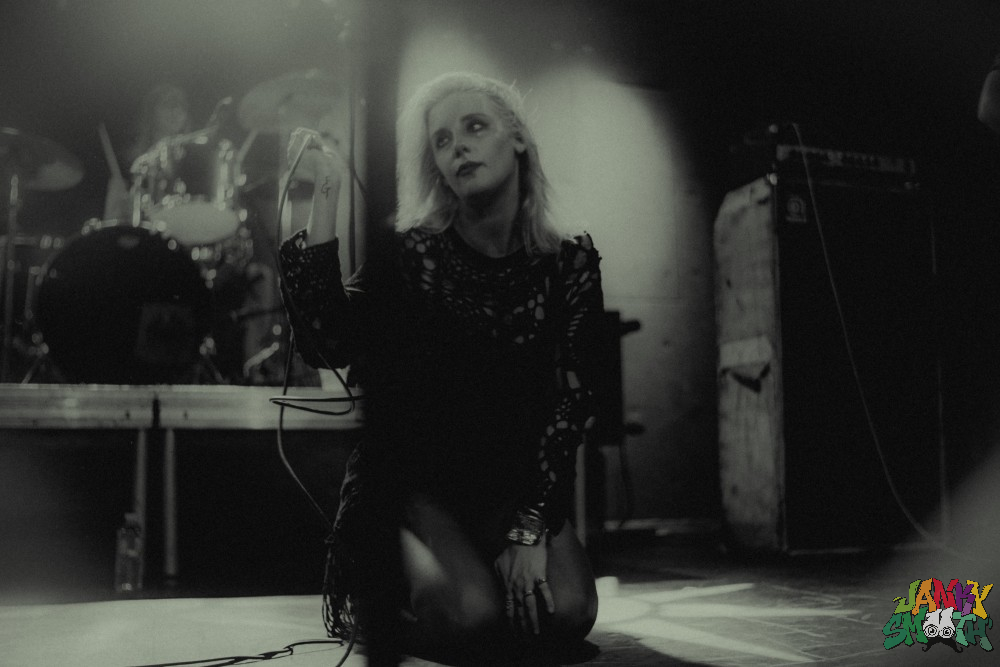 On Friday night at The Teragram Ballroom, fans swerved right into the impulsive energy of Whitter, California’s own, Plague Vendor, opening for badasses, White Lung. The band kicked their tour off right in the pit of Downtown Los Angeles, serving up the tastiest tracks from Plague Vendor’s new album, Bloodsweat.  There was no blood in sight but there was plenty of sweat splattered on stage. I still get euphoric flashbacks of singer Brandon Blaine’s performance, shaking his chest, thrusting his hips and whipping his hair around. No doubt he is a mad and sexy genius.  Plague Vendor was opening for the almighty White Lung but I was there to see PV.  High Functioning Flesh also played and are included in our gallery below.  I took a look around at the crowd and noted that there was a majority in the audience; T-shirts with the Bloodsweat album cover on them, spread out in the cluster of people. And if they weren’t already fans then they sure as hell left that night new fans.

The lights transitioned to red.  Brandon Blaine entered and a score of applause welcomed him. With no words exchanged between band mates, drummer Luke Perine started the show with the first song on the Bloodsweat album “Anchor to Ankles”.  Guitarist Jay Rogers and bassist Michael Perez immediately joined in on the song with raw, thriving force, strumming and banging on their instruments.  I watched Brandon center himself on stage with the microphone.  I could see the fire building up inside him. His eyes scanned the venue when suddenly the lights flashed white and at the same exact moment, Brandon screamed out.  Fans were head banging in sync with the fast tempo and the flashing of lights. The head banging quickly turned into a circle pit as Plague Vendor played a majority of songs from their new album.  Photographer and videographer, Johan Ramos did capture Plague Vendor performances of Breakdance on Broken Glass and Black Sap Scriptures from their first album, Free To Eat.

Feeling the waves of vivacity from the music and the audience, Brandon gave all of himself to us. During the song “Jezebel” Brandon danced with an incredible intensity. His legs shimmied around the stage like Elvis Presley as he added in his increasingly infamous crotch thrust. He sung the lyrics to the songs while simultaneously jerking himself across the floor, hair wild and whipping, slaying in every way. Brandon Blaine was the most hypnotic performer to watch the entire night; doing crazy tricks like placing his hands on the kick drum and kicking his legs up to do a full hand stand. He even made the audience participate in the show by requesting for everyone to squat all the way down to the floor until he gave the signal to jump up at the simultaneously. Brandon continued to sing “Fire to Emotion” to the crowd right at the edge of the stage. The song stopped, he signaled the crowd “1, 2, 3!”  and he jumped right into the pit, right at that moment as everyone jumped up into the air. All I could see was Brandon’s body bobbing up and down in between fans who were trying to grab and claw at him.  Real rockstar shit. 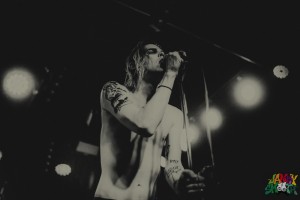 Once Brandon got back on stage and the band continued on with their set, the fans were in high spirits. The energy in the room egged the band on and they played hard,fast and loud.  Bass player Michael fell to the floor and laid there with his bass on top of him.  When the band played their last song, everyone gave it their all, hair swaying back and forth, heads banging hard, moshers circling each other, fists punching the air. The song finished and Brandon dropped the microphone and jumped back into the crowd for a dramatic exit.

No one wanted their set to end. People were yelling out “One more song!” or “Two more songs!” but all the lights went up regardless.  I have never felt so sad to see a killer show end so quickly. Plague Vendor continue their tour through the country with White Lung.  Check tour dates below and make sure you check out their new album Bloodsweat, out now.  Check out our interview with Brandon from our Dash Radio show, Janky Smooth and the NSA.

Headlining the show was White Lung from Vancouver, Canada. Before the band came out on stage the crowd shifted gears. White Lung fans emerged to the front and surprisingly, there were a lot of men. The drummer Anne-Marie and guitarist Kenneth walked in with their new bass player. The crowd went wild when singer Mish Barber Way walked in with the swagger of a Broadway performer. 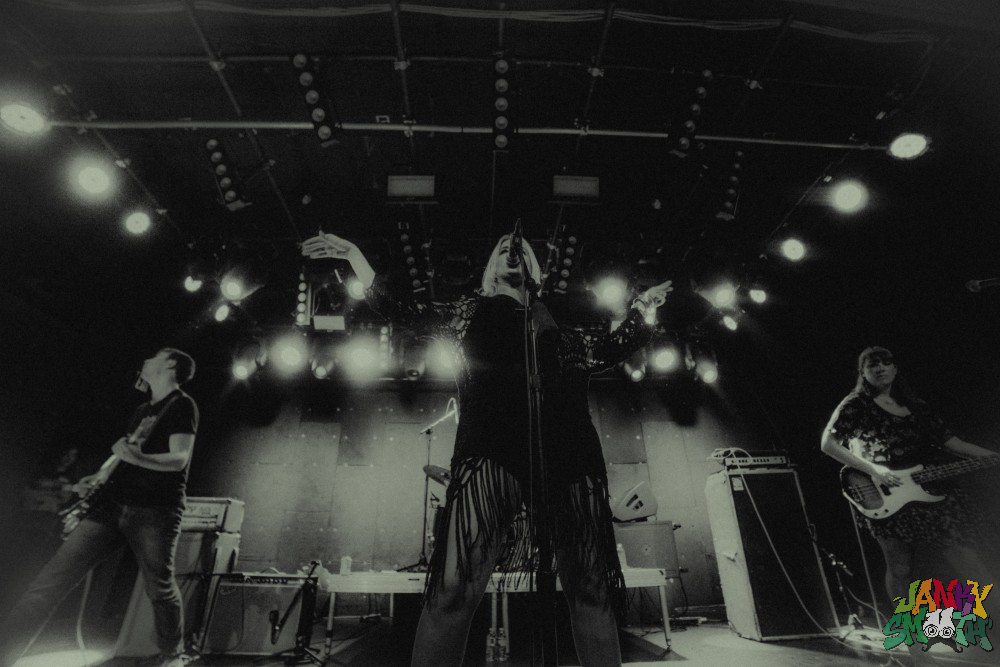 White Lung at The Teragram Ballroom

They played a strong set of songs from their new album, Paradise. Mish sang with a confident attitude, always keeping her eyes on the audience as they sang with her. She possessed the stage as she danced around, whipping her bleached white hair. White Lung played a long set and they managed to keep up the energy throughout.  I could not keep my eyes off of Anne-Marie in the background playing her drums like the badass that she is, hardly breaking a sweat. Kenneth had the crowd moshing in the circle pit nonstop with his sweet guitar riffs.